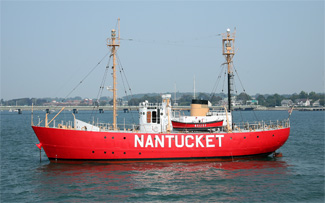 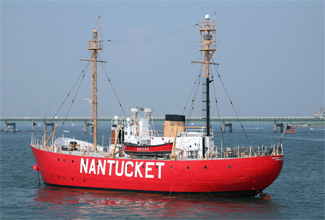 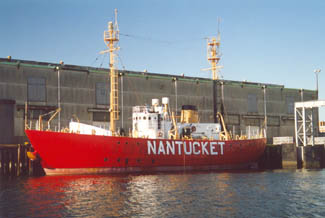 Lightship WLV-612 was built at Curtis Bay, Maryland in 1950 at a cost of $500,000, and when it was commissioned on September 18 of that year, she had SAN FRANCISCO emblazoned on her sides. Fred L. Finlay was the commanding officer at the commissioning, but James E. Fleming came on board to serve as voyage commander during the vessels lengthy journey to the Pacific coast later that fall. Fleming left the vessel after its safe arrival at Coast Guard Base Yerba Buena Island in San Francisco, and Finlay, who had served as executive officer during the transoceanic voyage, resumed command on December 5. From 1951 to 1969, the lightship served on San Francisco Station, a point 8.6 miles from Point Bonita Lighthouse at a bearing of 244 degrees. Finlay was in charge of the lightship until 1952, and then returned in 1955 for another three years. In 1969, the lightship was assigned to Blunts Reef Station, located about 4.5 miles offshore from Cape Mendocino Lighthouse. After just two years at Blunts Reef, the lightship became the only one to transit the Panama Canal in both directions when it sailed back to the Atlantic Coast and took up anchor at Portland Station in Maine from 1971 until 1975.

Lightship WLV-612 was transferred to its final station, Nantucket Shoals, in 1975 and served there until 1983. During its last four years on the shoals, it alternated service stints at the shoal of roughly twenty-one days with WLV-613. After pulling up its anchors from Nantucket Shoals for the last time, WLV-612 remained an officially designated lightship, but it assumed some unique missions in security, law enforcement, and public relations.

While George Bush was serving as vice president, WLV-612 was used as a radar and security-communications platform when the Bushes were present at their vacation home in Kennebunkport, Maine. In fact, Vice President Bush was visiting aboard the lightship on September 1, 1983, when word was received that the Soviets had shot down Korean Airlines Flight 007 over the Sea of Japan, after the 747 had strayed through Soviet airspace due to a navigational error.

In the fall of 1984, WLV-612 served off the southern coast of the United States as a fueling station for vessels engaged in law enforcement and drug interdiction. During this assignment, she towed a disabled Coast Guard vessel to safety when it drifted close to Cuban waters. Though the lightship had proved useful, the costs of modifications needed for her to be really effective were considered prohibitive. The vessel sailed to Boston in early 1985, where she became the last U.S. lightship to be decommissioned on March 29, 1985. Boston Educational Marine Exchange purchased the lightship later in 1985 but was forced to return the ship to the General Services Administration due to financial difficulties.

The State of Massachusetts (Metropolitan District Commission) acquired WLV-612 in 1987 for $1,500 with the intention of using the vessel as a floating museum at Georges Island in Boston Harbor, but lack of funding prevented the plan from being carried out. Instead, the lightship was berthed at Marina Bay in Quincy, where a volunteer support group known as the Friends of Lightship Nantucket donated numerous hours to restore the vessel and open her up to visitors. In July 1992, the overhauled main engines, which had been dormant for over seven years, were fired up and WLV-612 sailed out into Boston Harbor to serve as the greeting vessel for a tall ships parade. Under protest by the Friends of Lightship Nantucket, the state declared the lightship surplus property in 1999, and on March 15, 2000, she was put up for auction on eBay, where Bill Golden, an environmental attorney and former Massachusetts state senator, beat out a couple of scrap metal companies with a winning bid of $126,100.

The Goldens hired a team of eleven master craftsmen in New Bedford to restore the lightship and convert its Spartan living quarters into a floating palace. After three years of work, the transformed lightship consisted of a master suite and four guest suites with hand carved mahogany and oak beds, six bathrooms, a kitchen with double ovens, two trash compactors, granite countertops, and a six-burner cooktop, a dining room with a tiger maple table able to seat twelve, a library/den, an office, and an entertainment room with a flat-screen television, foosball table, and the captains original poker table. The top deck was overlaid with American cherry and equipped with hammocks that can be cranked out over the water, and the vessels aging twin engines were replaced with a state-of-the-art Caterpillar power plant. Part of Bill Goldens plan was to create sufficient value in the lightship to guarantee that she would always be preserved.

To help offset the cost of the conversion, the Goldens decided to offer their lightship for events or overnight accommodations. According to the lightships own website, the vessel was originally available for weekly charters in Nantucket Harbor from May through September and in Boston for event charters at Rowes Wharf from October through April. Visitors aboard the historic lightship were promised an authentic New England maritime experience coupled with the ultimate in New England hospitality.

After a few seasons of charters, the Goldens realized that from a business standpoint Nantucket was not the best harbor for the lightship. Although the ships name and opulence tied in well with the island, what was needed was a major commercial port or one with a longer season. In 2006, the Goldens reluctantly put their beloved lightship on the market for $7.6 million so they could spend more time at home with their young son, but they hoped that any potential new owner would allow them to maintain a minority stake in the vessel.

Unable to find a buyer for the lightship, the Goldens have explored other options of making their investment commercially viable. During 2008, Nantucket Lightship was under charter to the waterfront DELAMAR Hotel in Greenwich, Connecticut, where it was available for overnight stays. In 2009, the lightship was moored at North Cove Marina in Lower Manhattan, where staterooms with a view of the Hudson River could be had for $395.

It would be great to spend a night on the lightship with some of the sailors who served aboard her to hear the tales of their service and learn what they think about their lightships spiffy accommodations.

In late August 2009, Bill Golden anchored his lightship off the Kennedy compound at Hyannis and flashed its main beacon from dusk until dawn to honor the late Senator Kennedy, who had been a guest aboard the lightship on a few occasions. A second light was shone on the Mya, Kennedys prized fifty-foot Concordia schooner.

For a larger map of Lightship Nantucket I WLV-612 Lighthouse, click the lighthouse in the above map.

Visit the Nantucket Lightship website for more information on chartering the vessel and for interior photographs of the restored lightship. This Nantucket Lightship gets around. It has been moored at Boston, Nantucket Island, Vineyard Haven, Newport, New York City, and, for a time, was anchored at DELAMAR Hotel in Greenwich, Connecticut where guests could stay overnight. The lightship was in New York City for 2015 - 2017. Recently, the lightship has been in Boston and New Bedford.

The lightship is privately owned.

Find the closest hotels to Lightship Nantucket I WLV-612 Lighthouse