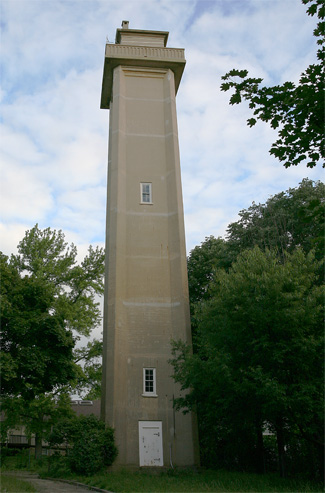 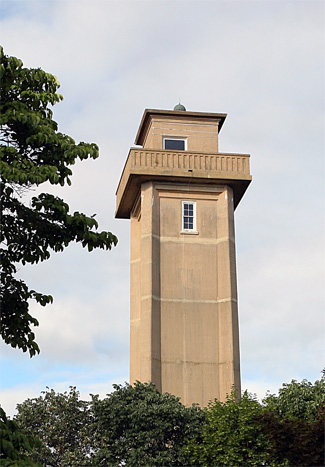 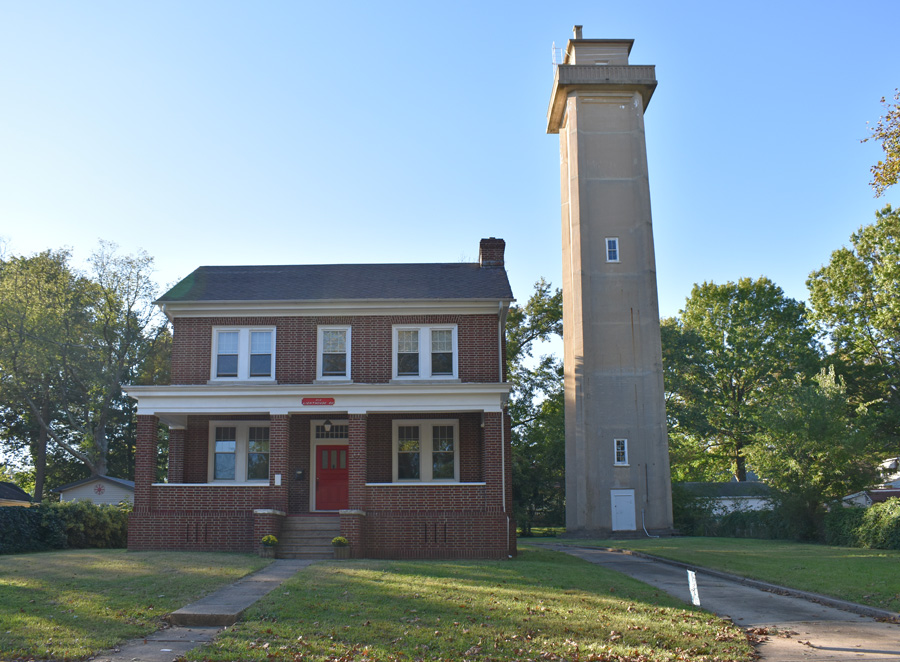 The town of Marcus Hook, Pennsylvania derives its name from Marrities-hoek; Marrities is the name of a Dutchman, and hoek is Dutch for a bend or hook. Situated near a bend in Delaware River, Marcus Hook has long been connected to vessels sailing the busy waterway. One of its early visitors was reportedly Edward Teach, better known as Blackbeard, who along with his crew often called at the home of a Swedish woman. Today, Marcus Hook is home to a large Sunoco refinery that processes the crude oil carried by the large ocean-going tankers commonly seen in Delaware Bay.

In 1914, the United States Engineers Office dredged a new thirty-five-foot channel near Schooner Ledge in Delaware River, prompting the Lighthouse Service to request $80,000 to construct two sets of ranges, Chester Range and Marcus Hook Range, to mark it. Congress provided the requested amount on July 1, 1916, and work on Marcus Hook Range began the following year. The Marcus Hook Range Lights were built just west of the town, and as Marcus Hook is situated adjacent to the Pennsylvania-Delaware border, they are actually located in Delaware. The lights, which point upstream, were the last manned range lights to be built along Delaware River.

The front range light, which has always been automated, stands in Delaware River about 100 yards offshore. A temporary light was first exhibited on shore in 1915, before a seventy-two-foot-tall structural steel tower situated was erected atop a twenty-foot-square concrete crib supported by a pile foundation in 1918. Acetylene gas, stored in tanks at the base of the tower, initially powered the light that is now electrified. Sufficient gas could be stored in the tanks to keep the light operating for three to four months.

The desired site for the rear light was on a hill between the towns of Edgemoor and Bellefonte, 1.8 miles southwest of the front light. As condemnation proceedings were necessary to obtain enough land for a proper tower and keepers dwelling, a temporary light, consisting of a locomotive headlight shown from a short tower, had to be used until the transaction was completed. After the land owner was paid $2,050, construction of the lighthouse was begun by Rust Engineering Company of Pittsburgh, and a 100-foot mast was erected on the property to serve as the rear light until the permanent light was ready to be exhibited on December 27, 1919.

The rear tower, built of reinforced concrete, is square with buttressed corners, and a metal stairway, with landings spaced twenty-five feet apart, leads up the tower to a spacious watchroom, which originally served as a chart and radio room. From there, a metal ladder provides access to the lantern room, which is surrounded by a four-foot-wide balcony offering a dramatic view of Delaware River. The original light source was a fourth-order range lens that produced a fixed white light of 24,000 candlepower at a height of 278 feet above the river. The lens was removed in the 1980s and can now be seen at Independence Seaport Museum in Philadelphia. A DCB-24 shines a red light along the range today.

The lighthouses nomination form for the National Register of Historic Places describes the keepers dwelling near the tower as a two and one-half story brick dwelling, Colonial Revival in style, with the ridge of its gable roof parallel to the road. The walls are of textured (red) brick laid up in Flemish bond, with splayed brick lentils over the windows, which are fitted with six-over-one sash. A flat roof porch runs across the front of the house, sheltering the entry centered in the three-bay facade. Decorative effects include a full return of the cornice across the gable ends and quarter-circle attic lights on either side of the exterior chimney on the northeast end. A kitchen, dining room, and living room are found on the first floor, and three bedrooms and a bathroom are located upstairs. A one-story brick structure that served as a combination garage, oil house, and work area was built behind the dwelling.

Leslie Van Stavern Millar moved into the keepers dwelling in the 1930s with his wife, six children, and his father, who also had served as a keeper. Millars assignment at Marcus Hook was a bit unique. As an experienced technician, Millar was responsible for maintenance of all the aids to navigation from Philadelphia to the mouth of Delaware Bay. Leaving family members to look after Marcus Hook Light, Millar would be absent for weeks at a time as he visited stations to repair generators, fog signals, and the mechanisms responsible for revolving some of the lights.

Three of the Millar children, Don, Len, and Richard, served in World War II while their father was stationed at Marcus Hook. Another son, Robert, was thus frequently responsible for the beacon at Marcus Hook when his father was visiting other lighthouses. Robert recalls there was a ventilator in the lantern room and as luck would have it, it was located right over the light bulb area. Water would collect in the ventilator and bing, off would come a drop  hit the bulb, and out would go the light. Then ringgggg would go the alarm in the house at the top of the stairs. These outages, according to Robert, seemingly always happened late at night in the middle of a thunderstorm, forcing him to climb the darkened tower to replace the bulb.

A floor model, battery operated radio at Marcus Hook Lighthouse allowed the Millar family to keep in contact with their father during his travels. Keeper Millar also penned personal letters to his children informing them of the interesting and sometimes humorous life of a lighthouse keeper. One such letter, written to young Helena Millar from Harbor of Refuge Lighthouse on September 21, 1948, contained the following: The keepers brought a live chicken out here a week or so ago and the darn thing is so tame it follows us all around in the engine room. Dont mind that too much but we cant convince her that the toilet is up on the second floor. She got locked up in the engine room the other night by mistake and the assistant keeper had to clean up the mess the next day. Says the next time he goes ashore, he is going to bring out a load of diapers to put on her.

Members of the Coast Guard continued to occupy the dwelling at Marcus Hook until sometime around 2004, when the house was vacated and boarded up. Declared surplus property, the dwelling and garage were listed on March 9, 2005 as being available under the provisions of the National Historic Lighthouse Preservation Act (NHLPA). No applicant was recommended for transfer of ownership, so the General Services Administration was notified, but no online auction has been scheduled for the property.

The unattended dwelling, decorated with bright red plywood over its windows, and the surrounding unkept lawn slowly became somewhat of a blight to the otherwise attractive neighborhood. Since the lighthouse is located in a residential area, it was not well suited to become a tourist destination like other lighthouses offered under the NHLPA. The Coast Guard awarded a $37,500 in 2008 to refurbish the porch of the dwelling. The official word was that the property had some environmental issues that need to be addressed before the government could sell the property.

In 2010, the Coast Guard sold the property outside the NHLPA process, and the keepers dwelling is now a private residence. A 2012 picture of the rear range light shows that the boards covering the windows had been removed and the lawn was being well kept.

For a larger map of Marcus Hook Range Lighthouse, click the lighthouse in the above map.

The lens used in the rear range light is on display at Independence Seaport Museum at Penn's Landing in Philadelphia.


A newspaper in 1949 noted the following: "The rear range light of Marcus Hook Range, on the Delaware river, 278 feet above the level of the sea, is the highest light on the Atlantic coast of continental United States."