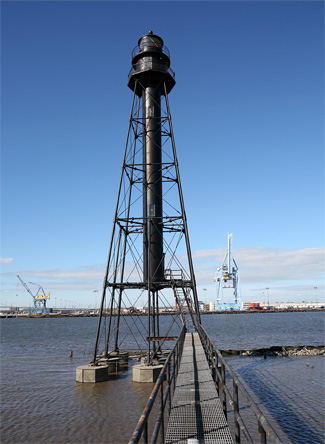 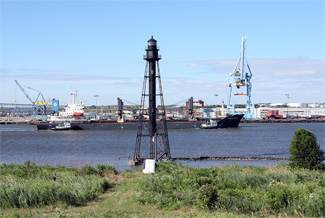 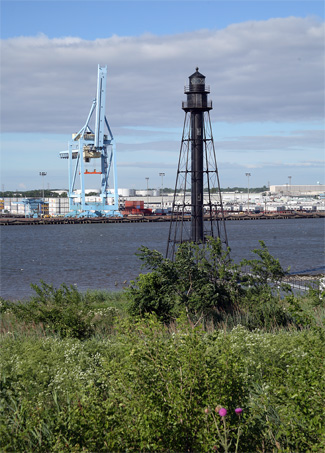 To mark the entrance to Christiana River from the larger Delaware River, the U.S. government acquired 4.75 acres of land on the northern side of this important intersection in 1834 for the erection of a lighthouse. A two-story, brick dwelling, topped by a short tower and lantern, was constructed on the parcel, allowing Christiana Lighthouse to commence service in 1835.

Due to the rising cost of oil, Christiana Lighthouse was selected in 1843 as a test site to ascertain the expediency of using gas, instead of oil in U.S. lighthouses. A brick building, wherein rosin gas could be produced, was constructed at the station, and a special apparatus for burning the gas was installed in the lighthouses lantern room.

James Mowton, of the Gas-Light Company of Baltimore, felt that men ignorant of gas-making could not be safely trusted to manage the apparatus proper for generating, purifying, and distributing gas, but despite this opinion, Keeper Benjamin A. Crozier, a former shoemaker, successfully used rosin gas in Christiana Lighthouse for over a year. This was the first time gas generated on-site had been used in a lighthouse, and those familiar with the experiment agreed it produced a light more brilliant than that produced by oil. The cost savings realized by using the gas was 16.5 cents per night versus 67.5 cents for oil, but still, for some reason, the experiment was not widely deployed.

Besides the experiment with rosin gas, Christiana Lighthouse is also known for having had the oldest keeper on record. Anthony Christy was 105 when he died on duty in September 1862.

In 1869, the Lighthouse Board decided that the land adjacent to Christiana Lighthouse would make a good home for the Fourth Lighthouse Districts depot. The first appropriation for Christiana Depot was made the following year, and work soon commenced on a storehouse, buoy shed, and wharves that would be home to the districts supplies and its spare lightship. After just a decade, the board decided that the site on Christiana River was not well-suited for a depot, and in 1881 the frame buoy and supply shed were dismantled and transported to Cherry Island Front Range Lighthouse, just over two miles up Delaware River. When reconstructed, the buildings were known as Edgemoor Depot.

Part of the reason for moving the depot was likely the susceptibility of the low-lying land on the banks of Christiana River to flooding. This deficiency was addressed in 1897 as noted in the that years Annual Report of the Lighthouse Board : Leaks in the river dike were repaired. Outbuildings, including the barn, were raised about 4 feet and the land-boundary dikes were raised and strengthened to allow the complete filling in of the light-house site by dredges.

In 1884, a beacon was placed at the end of a pier near Christiana Lighthouse to better mark the river entrance. Seven years later, this light, known as Christiana North Jetty Light, was replaced with a frame bell house surmounted by a belfry, on the roof of which the lantern was mounted. A 2,100-pound bell was hung in the belfry, and a striking machine was installed in the bell house. To aid in the operation of the fog bell, the keeper was provided with an electric starting apparatus, consisting of a magneto mounted in the hall of the Christiana light-house and connected with the fog-bell house by a No. 10 copper wire, about 2,150 feet long, mounted on porcelain insulators placed along the railing of the elevated board walk on the jetty.

The rear light was exhibited from the top of a 104-foot-tall, square, pyramidal, skeleton iron tower with a central stair cylinder, surmounted by a watch room and a round lantern. Upriver, the front light was shown from a square tower rising from the middle of a 12x 22 structure that contained a bedroom and living room for the keeper. This lighthouse, along with a storehouse for coal and oil, was located on a pier that extended a short distance into the river.

The first keeper of the front light was George O. McKeonan. Whether he actually lived in the lighthouse on the pier, which did not have a kitchen, or at a dwelling near the rear range light is unknown. In 1929, the front range light was replaced by an automated light on a skeleton tower, but the light was automated well before this time. George O. McKeonan is listed as the lights only keeper, and his tenure ended in 1912.

Congress appropriated $40,000 for Bellevue Range Lights on June 30, 1906, but contracts for their construction were not awarded until 1908. The range lights shone upriver and helped mariners navigate between Cherry Islands Flat Range and Schooner Ledge Range.

William H. Johnson served as keeper of Bellevue Rear Range Lighthouse during the 1920s. Along with his wife, mother, daughter, and son-in-law, Keeper Johnson apparently lived in the old Christiana Lighthouse while at the station. Johnson was devoted to his lights, reportedly never taking a single vacation day, of which he was granted fifteen annually, and in 1930, he was awarded the lighthouse efficiency pennant for having the model station in the district.

In a newspaper article in 1929, Keeper Johnson was quoted as saying he had seen only one wreck in the decade he had been at the station. In the morning of February 14, 1927, the Wilson Line ferry Harding Highway was crossing Delaware River from Penns Grove, and as it approached the mouth of Christiana River, a dredge started out. The captains of the two ships became confused, and rather than plow into the dredge, the captain of the ferry guided his vessel into the North Jetty, which was marked by a light and bell tower. Before the ferry sank, the eighteen ferry passengers managed to escape onto the jetty.

Bellevue Range was automated around 1934. After having been vandalized and relegated to a place for carousing, Christiana Lighthouse was razed in 1939. The concrete dwelling, built at the same time as the Bellevue Range Lights, was also removed at some point in time.

Over the years, dredging operations for the shipping channel in Delaware River produced a large amount of material that was deposited around the mouth of Christiana River. These operations slowly caused the western shoreline of Delaware River to migrate over 3,000 feet eastward. This new riverfront property has not gone unused. The fill area south of the Christiana River is now part of the expanded Wilmington Marine Terminal, while the area along the northern bank of the Christian River is home to Cherry Island Landfill. Another result of this land buildup is that Bellevue Rear Range Lighthouse, originally built out in the Delaware River, now stands well within Christiana River!

As the growing mountain of waste near Bellevue Rear Range Light was threatening to obscure the beacon, the Coast Guard was forced to abandon the almost century-old tower in 2001 and erect a modern steel tower in a more favorable location. Though no longer exhibiting its fixed, green light, the old black tower still attracts an occasional visitor willing to endure the sites and smells of a landfill for the chance to view a piece of land so filled with lighthouse history.

In April 2007, Bellevue Rear Range Lighthouse, deemed excess by the Coast Guard, was offered at no cost to eligible entities, including federal, state and local agencies, non-profit corporations, educational agencies, or community development organizations. When no qualified entity expressed interest in the lighthouse, it was returned to the Coast Guard.

For a larger map of Bellevue Range Lighthouse, click the lighthouse in the above map.

This lighthouse is accessed through Wilmington's Cherry Island Landfill, which in the past permitted admittance for bird-watchers and lighthouse enthusiasts. Visits to the lighthouse are no longer permitted, but you can call the landfill to see if this has changed: (302) 764-2732. The landfill can easily be reached by taking I-495 Exit 3, just north of Christiana River, and going southeast on 12th Street.

The lighthouse is owned by the Coast Guard. Access to grounds conditional on landfill, tower closed.

On a return trip, we had no problems getting permission to visit the lighthouse through the landfill. After signing a waiver at the check-in station and putting on the required fluorescent yellow hard hats and safety vests, we drove ourselves to the lighthouse. A large boat just happened to be coming up the Christiana River when we arrived making for a great photo op.