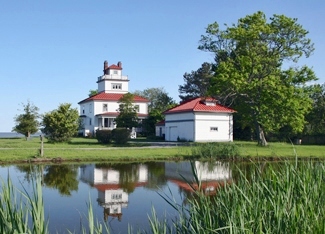 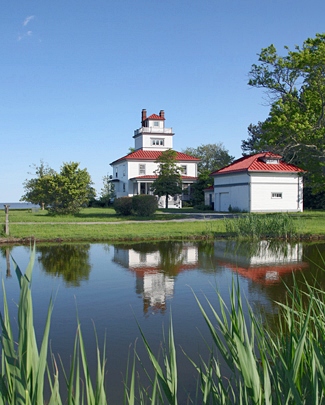 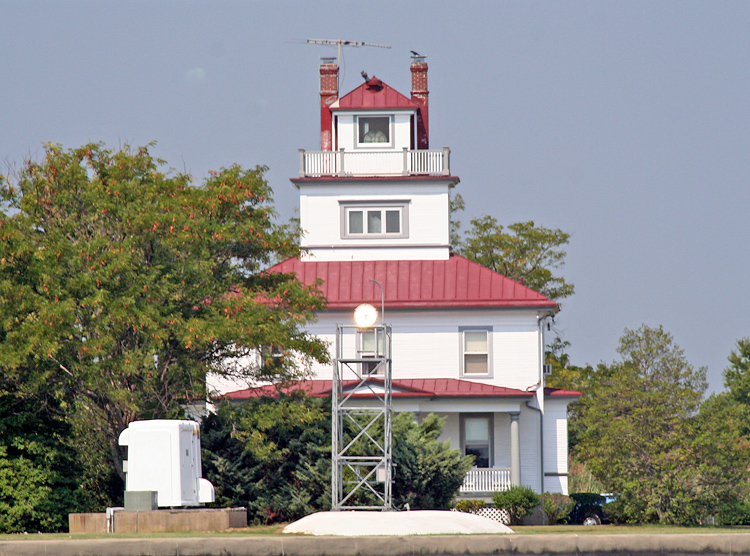 In 1905, the legislatures of New Jersey and Delaware felt compelled to define the line of demarcation between Delaware River and Delaware Bay. Three commissioners were selected from each state, and by the following year they had agreed upon the official boundary. Granite monuments were placed at the points where this imaginary line touched the New Jersey and Delaware shores, and the inscription on the Delaware monument, located just northwest of Liston Point, reads:

Mouth of the Delaware River

A straight line drawn from the center of this monument to the center of a similar monument erected at the mouth of hope creek on the New Jersey shore is the dividing line between the Delaware River and Bay. Ascertained June 22 A.D. 1906 in pursuance of uniform acts of Legislatures of the State of Delaware and the State of New Jersey approved A.D. 1905.

Several caisson lighthouses aid vessels in navigating the forty-two-mile length of Delaware Bay, but when ships arrive at Delaware River, range lights are used to help them remain centered in the shipping channel. The first range encountered up-bound from the bay to the river is the powerful Liston Range Lights, which guide vessels from Ship John Shoal Lighthouse, through the upper portion of the bay, and into the narrowing Delaware River.

Due to improvements made by the U.S. Army Corps of Engineers to the lower portion of the Delaware River shipping channel, the Port Penn Range Lights, established in 1877, were discontinued and replaced by the Liston Range Lights. The first Liston Front Range Light was a temporary structure composed of a lantern post topped by a galvanized-iron headlight lantern and fitted with a triangular slatted daymark. This beacon was first lit on October 25, 1904 and was situated on the shore of the Delaware River, less than one mile south of Port Penn Front Range Light. A temporary 100-foot-tall lantern post commenced operation as the rear light on the same date.

In 1907, Major C.A.F. Flagler, the engineer of the Fourth Lighthouse District, provided a forty-eight-page booklet entitled Specifications and Contract for a Light-House, Oil House, Barn, Etc. at Listons Range Front Light-Station, Delaware to all potential bidders for the project. Stringent specifications were provided for plumbing, heating, inside carpentry, plastering, and painting, and two full pages were devoted to describing the expected quality of the construction materials. Bricks had to be sound, well made, hard, and of uniform dimensions. The galvanized iron had to be well coated with zinc and of approved manufacture, and the lumber was to be all square-edged, straight, truly sawed and worked, sound, strong, thoroughly seasoned, free from large knots, and except framing lumber, perfectly dry when put in place.

Built upon five acres purchased by the government on June 18, 1903, Liston Front Range Lighthouse is a two-story, framed dwelling with a hipped roof, topped by a watchroom and lantern room. The dwelling originally had eight spacious rooms, four on each floor, but its occupants had to make an excursion outdoors to reach the bathroom, which was attached to the oil house. The oil house is somewhat unusual in that it is made of white enameled brick. The front range lighthouse was completed in November 1908, and its light was first exhibited on the night of December 28, 1908, taking the place of the temporary front beacon that was located seventy-eight feet closer to the river along the range line.

Early on, a fourth-order range lens manufactured by the Macbeth Company of Pittsburgh was used to focus the light from an incandescent oil vapor lamp in the lighthouses lantern room. A mechanical shutter apparatus was placed in front of the lens to produce an occulting light visible for two seconds, then eclipsed for one second.

A member of the Duncan family did eventually move into the lighthouse, but this did not happen until 1998, when William (Bill) Duncan, grandson of Keeper Duncan, purchased Liston Front Range Lighthouse. Earlier that year, Bill Duncan had rediscovered the foundation for Port Penn Front Range Lighthouse on a site alongside Highway 9 that was overgrown with bushes and phragmites reeds. Bills father was born at Port Penn Front Light on June 1, 1894. To call attention to this important historic site, which had become largely forgotten, Bill Duncan launched a crusade that resulted in the establishment of a historical marker on June 14, 2003 near the former Port Penn Front Range Lighthouse. Bill Duncan had his lighthouse, the last remaining wood-frame lighthouse in Delaware, placed on the National Register of Historic Places in 2004 to inspire those that follow to maintain and preserve this maritime treasure.

The final official keeper at Liston Front Range Lighthouse was Harry Spencer, Sr., who transferred to the station from the companion rear range light in 1927. Several years earlier, the Bureau of Lighthouses had established a system of efficiency stars and pennants to promote efficiency and friendly rivalry among lighthouse keepers. Keepers who were commended for efficiency at each of the years quarterly inspections were entitled to wear the inspectors star for the next year. A keeper who received the inspectors star for three consecutive years was awarded the commissioners star. Liston Front Range Lighthouse was definitely well-kept by Harry Spencer as he received both the inspectors and commissioners star while at the station.

Additional insight into Keeper Spencers character is provided by the following account related by his son, Harry Spencer, Jr.:

Despite having coal burning fireplaces in each room downstairs, Dad, being very conservative, wouldnt permit any lighted fire. Since he wouldnt let us burn any fire, we closed off half of the house in the wintertime where the living room and sitting room were located and utilized just the dining room and kitchen on the first floor. Needless to say, the closed-off rooms grew very cold. Dad had a desk in the corner of the sitting room where he kept all of his lighthouse service records and that sort of thing. Well, one winter, it honestly got so cold in this half of the house that when he went to use the ink  well, the ink was frozen. Dad had to let the ink thaw out in the kitchen before he could use it to pen a letter.

Keeper Spencer passed away at Liston Front Range Lighthouse in 1943, while Harry Jr. was serving overseas in the army during World War II. Sophia, Keeper Spencers wife, was then appointed lamplighter, a position she held until she left the lighthouse in 1948. The lighthouse was sold at public auction in 1954 to Mrs. Kathleen Herbert for $8,200 and has remained in private hands ever since. Though inactive, the Fresnel lens remains in the lantern room.

The best way for the public to view Liston Front Range Lighthouse is from Delaware River, as the lighthouse is now part of a private riverside community called Bayview Beach. If you venture out on the river, be sure and also look for the granite markers that designate the dividing line between Delaware River and Delaware Bay. Years ago, these markers both succumbed to erosion and toppled into Delaware River, but in 1983, Delaware River & Bay Authority, which operates the Cape May  Lewes Ferry and the Delaware Memorial Bridge, retrieved the monuments from the muddy river bottom and erected them on circular protective piers. Thanks to individuals interested in preserving the maritime history of Delaware River, Liston Front Range Lighthouse and the nearby granite markers, thought difficult to visit, are both now well preserved.

For a larger map of Liston Front Range Lighthouse, click the lighthouse in the above map.

From Port Penn, travel south on Route 9 for 2.3 miles crossing over Augustine Creek. At this point the road will make a sharp right turn, and there will be a road on your left leading into a private community at Bay View Beach. The residents of the community are not too cordial to visitors, so your best bet is to settle for a view of the lighthouse from Route 9.