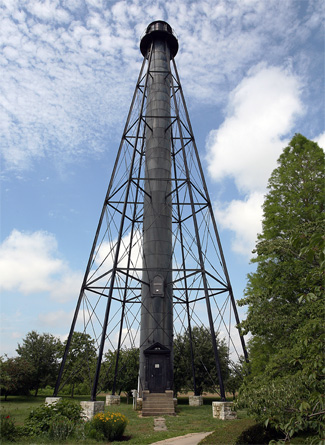 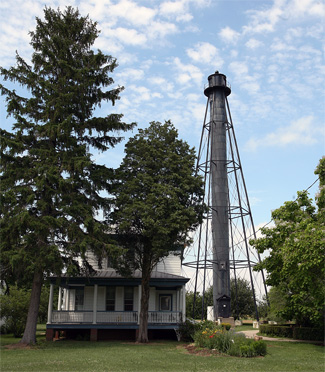 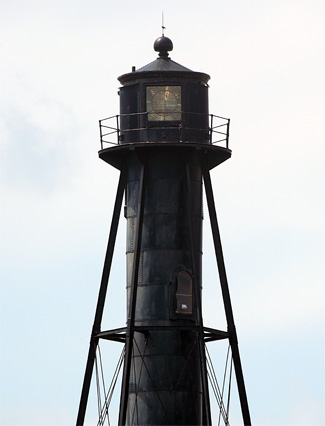 Liston Rear Range Lighthouse is Delawares tallest lighthouse and also the one farthest from the water, standing three miles inland from the riverside location of its companion front range light. Vessels bound upstream pick up the piercing lights of Liston Range, the longest navigable range in the United States, near Ship John Shoal Lighthouse, which is located roughly seventeen miles from the front light. After following Liston Range from Delaware Bay to the mouth of Delaware River, vessels will alternately encounter red and green range lights as they continue upriver. Due to the length of the channel it covers, Liston Range must exhibit white lights, unlike the colored lights of the other range lights on the river. Liston Rear Range Lighthouse is the only range light on Delaware River to retain its powerful Fresnel lens; all others have been removed in favor of modern optics that are easier to service and maintain. Liston Rear Range Lighthouse had elsewhere its beginnings. Built by Kellogg Bridge Company of Buffalo, New York, the wrought iron tower originally served as Port Penn Rear Range Lighthouse. The 120-foot tower was first lit on April 2, 1877 and helped guide ships from Ship John Shoal to Dan Baker Buoy until the U.S. Army Corps of Engineers realigned the shipping channel served by Port Penn Range.

On October 25, 1904, temporary lights were established on Liston Range to serve the newly created channel, and Port Penn Range was discontinued. The temporary Liston Rear Range Light consisted of a 100-foot-tall lamp post bearing a triangular lattice-work daymark and topped with a galvanized-iron headlight lantern. Daniel Bailey had been appointed keeper of Port Penn Rear Range Lighthouse on July 1, 1904, and he continued to reside at that station while caring for the new temporary rear range light, located just a few miles away.

The skeleton iron tower at the abandoned Port Penn rear light-station was moved here and re-erected by contract on a new foundation. On May 15, 1906, the light was removed from the temporary lantern post and placed in the lantern of the re-erected tower. A second order range lens with lamps was ordered. A topographical survey of the site was made, and a map was platted showing the proposed location of buildings, drive, walks, and drainage. Three granite monuments, marking the boundary lines of the site, were set. Plans and specifications for the proposed dwelling, oil house, and barn were completed, and bids for their erection were invited.

Manufactured by Barbier, Benard & Turenne of Paris, France, the second-order range lens ordered by the Lighthouse Board replaced the locomotive-type reflector light in the relocated tower on November 10, 1906. The walls of the lantern room had to be extended outward to provide room for the keeper to maneuver around the large Fresnel lens. By the end of August 1907, a new dwelling, barn, oil house, and privy had been completed at Liston Rear Range Station. No longer needed, the remaining structures at Port Penn Rear Range Station were sold at auction for $760. The Port Penn keepers dwelling is still standing and is currently used as a private residence.

Assistant Keeper Robert Davidson was suspended on October 5, 1919, one day after an altercation in the base of the lighthouse tower with Head Keeper Harry Spencer. According to statements made by the keepers, the argument was over a colored boy, who for some time had been friends with the son of Keeper Davidson. Keeper Spencer claimed the boy used unseemingly conduct, something that was forbidden on the lighthouse reservation, ordered the boy off the reservation, and told his father to keep him at home. A week later, on October 4, 1919, the boy returned, and when he was ordered to leave, he said he didnt have to as Keeper Davidson had told him he was allowed to visit.

Keeper Davidson was away when Keeper Spencer ordered the colored boy off the station on October 4 and nagged his children, but when he returned, he visited the tower at 8 p.m. and called Keeper Spencer down. The following is Davidsons account of what transpired next: He deliberately stuck his face in mineI took him by the collar with my left hand and slapped his face out of mine with my right open hand. The button came off his shirt and he fell.

The trouble at this place has been caused by Spencers talk and overbearing manner, and parents taking up the quarrels of children.

On October 4, Davidson being off station, an argument commenced between Miss Davidson and Spencer. It appears that Spencer would take the family to task whenever Davidson was absent.

Regarding Spencer, this office considers him one of the most efficient keepers in this District, but he cannot get along with assistants. He talks too much and is domineering and overbearing. I am convinced that Spencer could not get along with any assistant and I intend to transfer him to a one man station at first opportunity.

Davidson has been in the service seven years; is young and energetic and up to this time has had a clean record. Knowing what I do about the condition, it is my opinion that Davidson had serious provocation and on account of the extenuating circumstances his dismissal is not recommended.

Keeper Davidson was reprimanded and suspended without pay for nearly a month, and Keeper Spencer was counseled to talk less and treat assistants with more consideration. The two keepers must have been able to put the matter behind them, as they both remained at the station for nearly another decade.

The station was electrified sometime in the 1930s, allowing the station to be fully automated and the dwellings to be sold. Only the small parcel of land around the base of the tower was retained by the government.

In 2001, Harry Spencer, Jr. had the opportunity to revisit the station where he had been born in 1920 while his father, Harry Spencer, Sr., was serving as keeper. After the Coast Guard escort had opened the door to the tower, Harry confidently ascended the towers 152 steps without stopping to rest at any of the five landings. Harry remembered that his father would always stand the first watch from sunset to midnight, before the assistant keeper relieved him to stand the second half of the watch from midnight to sunrise. To provide warmth during the longer winter watches, the keepers would haul coal up the tower by the bucketful to burn in the watchrooms small stove. During strong winds, the keepers could feel the tower swaying, and Keeper Spencer once witnessed water slosh out of a bucket from the towers movement.

Harry Spencer, Jr. was serving as a volunteer facilitator in 2005 for educational programs sponsored by the Delaware River & Bay Lighthouse Foundation (DRBLHF). In this role, Harry visited classrooms, civic organizations, and senior centers to share his experience of growing up at a lighthouse and to educate the public about lighthouse preservation efforts in the State of Delaware. To help demonstrate how range lights operate, Harry spent roughly 100 hours constructing detailed models of the Liston Range Lights. The model of Liston Rear Range Lighthouse stands over four feet tall and exhibits a fixed white light, while the Front Range Lighthouse model displays an occulting white light.

On May 3, 2004, the Delaware River & Bay Lighthouse Foundation signed a thirty-year lease on Liston Rear Range Lighthouse with the Coast Guard and assumed responsibility for the maintenance and preservation of the historic tower and the nearby enameled brick oil house. Speaking at the signing, BMC Michael Baroco, officer-in-charge of USCG Aids to Navigation Team Philadelphia, remarked this is not just a light or a structure made of wood and iron  it is a monument to the great men and women who kept these lights burning through many difficult times throughout our nations history. In 2007, DRBLHF surrendered its lease on the lighthouse deciding to focus on its other two lighthouses in Sussex County.

On April 10, 2012, Liston Rear Range Lighthouse was made available under the National Historic Lighthouse Preservation Act of 2000 to eligible federal, state, and local agencies, non-profit corporations, educational agencies, and community development organizations to be used for educational, recreational, cultural, or historic preservation purposes. Interested entities were given two months to submit a letter of interest expressing their desire to submit an application for ownership. The offered property included just the tower and oil house, not the adjacent keeper's dwellings.

When no acceptable owner was found, the General Services Administration initiated an online auction for the property on April 15, 2013. Five bidders participated in the auction, which closed on May 20, 2013 with a high bid of $22,003. The winning bidder was Bill Collins of Newbury, Ohio, who grew up on Lake Erie and has always found lighthouses intriguing. After winning the auction for Liston Rear Range Lighthouse, Collins gained a second lighthouse in July 2013, when the auction for Michigan's Manistique East Breakwater Lighthouse closed after just his bid of $15,000.

In 2020, Ken Spicer, whose family has owned the two dwellings at Liston Rear Range Lighthouse for generations, purchased the lighthouse from Bill Collins. Now, the lighthouse property is whole again and owned by a single owner.

For a larger map of Liston Rear Range Lighthouse, click the lighthouse in the above map.

From Highway 13 at Biddle's Corner (1.8 miles south of the Chesapeake and Delaware Canal), turn east onto County Road 2 (Port Penn Road). Liston Rear Range Lighthouse will be on your left after about a half mile, across the road from Hickory Grove Cemetery.

The lighthouse and dwellings are privately owned. Grounds/dwellings/tower closed.