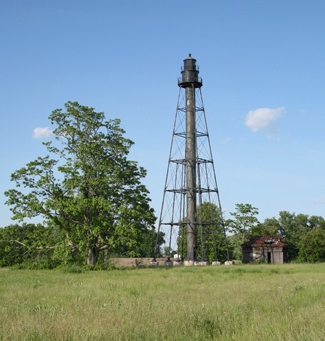 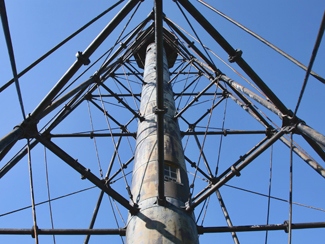 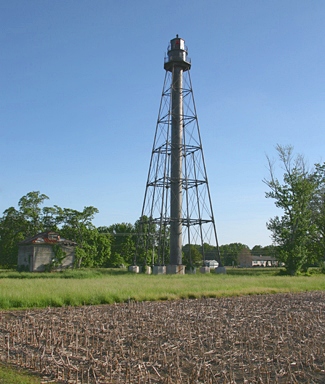 Near the end of the nineteenth century, commercial interests in Philadelphia felt that they were at a great disadvantage compared to other major port cities due to the shallowness of the Delaware River. The drafts of large ocean carriers exceeded the depth of the Delaware River, forcing these vessels to call at New York, Boston, or Baltimore. To remedy this situation, a Joint Committee on the Improvement of the Harbor of Philadelphia and the Delaware and Schuylkill Rivers was formed. This committee urged the Army Corps of Engineers to dredge a new thirty-foot-deep and 600-foot-wide channel in the Delaware River, based on the following reasoning:

The importance of this improvement to the states of Pennsylvania, New Jersey, and Delaware, and the great West, can hardly be overstated. The Delaware River is the natural maritime outlet of an area of over 54,000 square miles, with a population of nearly 7,000,000 people. This area covers the manufacturing, coal, iron, steel, oil, and shipbuilding centers of the United States; and without a proper channel to the sea, the movement of these products to the markets of the world is embarrassed, and the cost of transportation is greatly increased.

Swayed by this argument, Congress passed a river and harbor act on March 3, 1899 authorizing the improvement. As the new channel did not always align with the existing one, the Lighthouse Service was forced to relocate some of its existing range lights and erect additional ones. Congress provided $60,000 on March 3, 1901 and an additional $30,000 on June 28, 1902 for establishing the Reedy Island, Port Penn, and Finn Point ranges on new sites. Two parcels of land were purchased for the new Reedy Island Range in 1901. A thirty-five-acre piece of marshland on the Delaware River between the mouths of the Appoquinimink River and Blackbird Creek was acquired for $1,050 for the front range, and a 5.62-acre parcel, located 2.8 miles to the southwest in the village of Taylors Bridge, was purchased at a cost of $525 for the rear range.

A Notice to Mariners, dated January 27, 1904, announced that Reedy Island Range Lights would be established on February 16, 1904. In this same notice, the name of the New Reedy Island Range was changed to Baker Range, and the former Reedy Island Range, which consisted of a front range on the southern end of Reedy Island and a rear range in Port Penn, was renamed Old Reedy Island Range. Though the name changes were likely to cause confusion for some time, the new lights hopefully simplified navigation on the Delaware River.

Temporary lights had to be used initially on Reedy Island Range, as work on permanent structures for the range would not begin for almost two more years. The temporary front light consisted of a fixed white reflector-light mounted on a pole that also had a white, triangular, slatted daymark to aid navigation. The initial rear light was also a fixed, white light but was displayed at an elevation of 120 feet from a pole with a black, triangular, slatted daymark.

A forty-six-page booklet, featuring specifications and fourteen drawings for the front range lighthouse, was distributed to potential bidders in 1904. By October of the following year, a contractor had been selected and work on the station had commenced. The lighthouse was described in the 1907 List of Lights and Fog Signals on the Atlantic and Gulf Coasts of the United States as a white, square, two-story wooden house, on columns, and having lead-colored trimmings, green blinds, a brown roof, and a veranda entirely around it; lantern on front slope of roof. Besides the lighthouse, an oil house and boathouse were also constructed, and on October 25, 1906, the reflector light was removed from the pole and placed in the lantern room of the newly completed lighthouse.

The permanent Reedy Island Rear Range Lighthouse would be a little longer in coming. The Lighthouse Board originally intended to discontinue Finns Point Range in New Jersey and relocate its tall skeletal tower, which had stood since 1876, to serve as Reedy Island Rear Range Light, however, pressure from mariners convinced the Lighthouse Board to retain Finns Point Range, even though it served a similar section of the shipping channel. The Board had to thus request $19,500 in 1906 to cover the expense of a new tower, and Congress didnt authorize the additional sum until May 27, 1908.

In the meantime, work did begin on the stations eight-room keepers dwelling, oil house, and barn on May 7, 1906. Bids for this project had been opened on September 9, 1905, but when none were found reasonable, the work was readvertised, and new bids were opened on December 2, 1905. Again, none of the bids were acceptable, and it wasnt until a third round of bids was opened on February 28, 1906, that a contract was finally made with the lowest bidder. The stations dwelling was a two-story structure with a hipped-roof and a large porch ringed by Tuscan columns.

Contracts for fabricating and erecting the rear tower were awarded in June 1909, and the 1910 U.S. Lighthouse Service Annual Report provided the following description of the lighthouse that was completed at the rear station that year.

The tower is a cast-iron cylindrical structure surmounted by a watch room and octagonal lantern, accessible from below by a spiral stairway enclosed in a cast-iron cylinder. It rests on nine concrete foundation piers and has concrete steps at the entrance door. The total height of the tower is about 125 feet. It is to have a fifth-order range lens lighted by a fourth-order incandescent oil-vapor lamp.

The lighthouses watchroom and lantern room are each encircled by a gallery, and the range lens was supplied by the Macbeth-Evans Glass Co. of Pittsburgh. On July 27, 1910, the lamp inside the skeletal tower was lit for the first time, and the temporary light on the pole was discontinued.

Keeper Aaron Kimmey had the opportunity to serve at both the front and rear Reedy Island lights. After having been stationed at Egg Island and Brandywine Shoal, Kimmey served from February to April of 1911 at Reedy Island Front Range Lighthouse, before receiving his final assignment to the rear range light. Living away from the waters of the Delaware River and Bay was a change for Kimmey, but he and his family made good use of the arable land at the rear range station. The family (Aaron, Annie and their four daughters) planted a large garden and several fruit trees and soon reaped a bounteous harvest of corn, lima beans, apples, and pears. This produce helped the family survive on the notoriously low keepers pay  $516 per year for Kimmeys assignment.

After more than fifteen years at Reedy Island Rear Range Lighthouse, Keeper Kimmeys wife Annie awoke around 5:30 a.m. on January 12, 1927 to prepare breakfast. Kimmey told his wife to let him rest a while before going downstairs, and he then passed away in her arms. Ten months before Kimmey died, the family doctor had diagnosed him with hyperstrophe of the heart, and it was the doctors opinion that going up and down long flights of steps at the lighthouse had contributed to his death.

While John E. Collins served as keeper of Reedy Island Front Range Lighthouse he was awarded the lighthouse efficiency flag for having the model station in the district in 1918. A couple of years later, he was commended for going to the assistance of two boats near the station. In one instance, he towed the motorboat Nautilus with three women and two men aboard to safety, and in the other, he towed the disabled freight boat Vigilant seven miles from the point where it had run aground.

In 1951, the function of the front range lighthouse was replaced by an automated light on a steel tower, and by the end of that decade all the buildings at the station were gone. When the rear range light was automated, the associated buildings were sold into private hands. Although the dwelling was inhabited, it and the other buildings did not receive proper upkeep, and over time their condition slowly deteriorated. On the evening of April 6, 2002, a fire destroyed the dwelling and caused significant damage to the oil house. The stations old wooden barn remained standing next to the active lighthouse for a few more years, but neglect finally tooks its toll on the barn, and it collapsed under a heavy load of snow. The crumbling piers supporting the tower were repaired around 2019, which should keep the lighthouse standing for years to come.

For a larger map of Reedy Island Range Lighthouse, click the lighthouse in the above map.

From Highway 13 in the town of Fieldsboro, go east on Fieldsboro Road for 1.6 miles to Highway 9 (Taylor's Bridge Road). Turn right on Highway 9 and drive three miles to Taylor's Bridge, where you will see Reedy Island Rear Range Light alongside the road.


During a visit to the lighthouse in 2014, there were some vultures roosting in the tower - kinda gave the place a bit of a spooky feel with them staring down at me undisturbed by my presence.