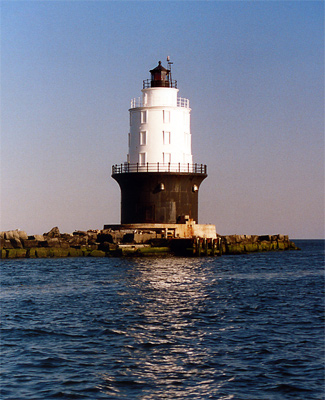 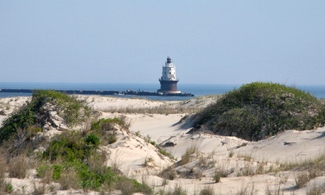 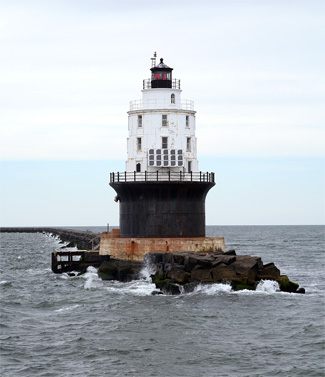 Under the authority of the Secretary of War, a commission of three officers of the Corps of Engineers was charged in 1890 with determining the best site near the mouth of Delaware Bay for a national harbor of refuge for deep-draft vessels. The Delaware Breakwater, which was constructed over a forty-year period starting in 1829, provided an anchorage with a depth of about sixteen feet at low tide, but that was too shallow for several new military and commercial vessels. The commission recommended a deep-water pocket on the west side of the main ship channel, covered by the shoal known as the Shears, as the best one for satisfying the required conditions. Work on the Harbor of Refuge Breakwater began on May 4, 1897, and quite amazingly, was completed on December 11, 1901 at a cost of roughly $2.2 million. In addition to the 7,950-foot-long breakwater, a set of ice piers was also constructed across the upper end of the harbor to provide protection from ice descending the bay. Being located roughly midway between New York Harbor and the entrance to Chesapeake Bay, the safe harbor allowed ships to put to sea in questionable weather conditions knowing that protection could be found in Delaware Bay.

Left unmarked, the breakwater would present a danger to navigation, so temporary lights were placed on each end of the structure. A thirty-foot frame tower topped by a lens lantern showing a fixed red light was positioned on the southeast end of the breakwater, while at the opposite end a beacon with the same characteristic was mounted atop a post. Both lights were exhibited for the first time on January 1, 1902. In May 1903, a 700-pound fog bell, sounded by a striking machine, was added to the southern end of the breakwater along with a temporary dwelling.

While preparations were being made for a permanent lighthouse, a powerful storm packing wind gusts of eighty-five miles per hour struck the breakwater in September 1903 and swept away the fog bell, striking machine, and frame tower. Keeper Charles Marshall, who was in charge of the temporary lights, came ashore after the storm and reported that the windows in his dwelling on the breakwater were smashed and the entire house flooded. The wooden schooner Hattie A. Marsh was riding out the storm in the harbor of refuge when it slipped its anchors and was dashed against the stone breakwater. Another vessel quickly came to the rescue and saved two of the crew, but the captain, Joseph Mehaffey, and four sailors were lost. This incident should have been sufficient evidence that a stout and durable lighthouse was required at this exposed location, 1.25 miles north of Delaware Breakwater.

A new fog bell and a steel tower were placed on the breakwater the following spring to replace those swept away by the storm. Congress had provided $30,000 for a lighthouse on Harbor of Refuge Breakwater in June 1900, but by the time work was ready to begin, the cost of labor and material had increased sharply, and another $20,000 had to be allocated in 1906. To save money, the brick superstructure first proposed for the lighthouse was replaced by a wooden structure, even though the Lighthouse Board was fully aware that the exposed site was an extremely dangerous one and subject to attacks of most violent seas.

In June 1907, the metalwork for the lighthouses concrete foundation was delivered at Lewes and excavation work began on the breakwater to provide a pit for the foundation. Seventeen months later, the lighthouse was completed at a cost of $49,941, and the subsequent Annual Report of the Lighthouse Board contained the following detailed description of the station.

On November 20, 1908, a fourth-order, incandescent oil-vapor light, illuminating the entire horizon, and flashing white every 12 seconds, was established in the white, hexagonal, three-story frame structure, with lead-colored trimmings, resting on a brown cylindrical iron foundation, located on the southerly end of the Harbor of Refuge Breakwater, southwesterly side of the entrance to Delaware Bay. The foundation of this lighthouse, completed in 1907, consists of a concrete block 40 feet in diameter and 15 feet 6 inches high, resting upon the enrockment of the breakwater. The superstructure consists of a center column of iron, a basement 32 feet in diameter of two courses of iron plates, and a hexagonal frame superstructure from the basement to the lantern. The fog-signal is a first class siren operated by compressed air.

The writings in the stations logbook by Robert C. Taylor , one of the lights head keepers, provide a record of the beatings endured by the exposed lighthouse. Two powerful storms each managed to shift the lighthouse two inches on its foundation.

April 10 & 11, 1918: We had a storm wind, N.E. gale did considerable damage to this stations storehouse roof. Broken lighthouse foundation shifted the big light about 2 inches on the foundation.

February 3 5, 1920: We had a N.E. storm and gale did some damage here. The old house, the bell and the davit and the rowboat, water tanks, and in fact, all that was in the house, washed overboard with the house. One barrel of oil, lots of tools, also fog signal gears. It washed everything off the dock. The wind and high sea  also moved the big lighthouse about 2 inches on its foundation.

Keeper Taylor and George C. Hickman, his assistant, were commended for the exceptional service and devotion to duty in maintaining the light and fog signal during the February 1920 storm, which ripped up about forty feet of the gallery decking and swept away all the outbuildings on the platform at the rear of the tower.

The Lighthouse Service realized as early as 1915 that erosion would eventually claim Cape Henlopen Lighthouse and began requesting funds to rebuild Harbor of Refuge Lighthouse so it could also fulfill the role of the endangered lighthouse on the nearby cape. Every purpose now served by Cape Henlopen Light, the service wrote, would be better served by the rebuilding of Harbor of Refuge Light to a height of about 140 feet. After years of requests, Congress finally allocated money for the project in 1922.

Nearly undermined by the sea, Cape Henlopen Lighthouse was discontinued on October 1, 1924 and replaced by a temporary steel light tower erected nearby. (Cape Henlopen Lighthouse finally collapsed in April 1926). After a temporary tower and light had been established on the Harbor of Refuge Breakwater, Keeper Taylor extinguished the wooden lighthouses light for the final time on April 12, 1926, as a work crew arrived to dismantle the structure.

Years of abuse had taken their toll on Harbor of Refuge Lighthouse. In its place, three-story cast-iron tower, fabricated by the Smyser-Royer Company, was erected in time for its light to first be exhibited on November 15, 1926. The following description of the new lighthouse was given by the Lighthouse Service:

The structure as remodeled consists of a conical tower supporting a watch room and lantern and supported by a cylindrical pier with a flaring upper course of plates to run the sea during rough weather. The tower shell of the pier and tower is made of cast-iron plates, the pier lined inside with reinforced concrete, and the tower proper with brick. The interior of the pier houses the fog signal, machinery, and air tanks. The tower proper, in three stories, contains the keepers quarters, and the fog signal apparatus is located on the third floor. The whole structure is supported upon a heavy block of concrete lying within the breakwater.

The illuminating apparatus consists of a four-panel fourth-order lens with type-A incandescent oil-vapor lamp, giving a single flash of 22,0000 candlepower every 10 seconds. The lens revolves on ball bearings and is driven by clockwork actuated by weights within the hollow central iron column of the structure.

The fog signal consists of a compressed-air siren, with two-way horns, projecting from the third floor on the channel side of the tower. The characteristic is a group of 3 blasts, each 2 seconds, every 45 seconds. The entire fog-signal installation, from engines to horns, is in duplicate.

Keeper Taylor took up residence in the new iron lighthouse, and just three years later, he made another remarkable entry in the logbook.
April 14  16, 1929: It was blowing about 78 mph, it was pretty bad on Monday night 15th. The lighthouse shook bad. We had a job to keep the light working, the house shook so. What we need is stone put on the northeast side to break the sea up before it hits the house for we know what the sea does around here.

Harbor of Refuge Lighthouse was automated in December 1973, when its final crew of coastguardsmen, including Angelo Rigazio, who joined the Coast Guard in 1970 after he was drafted to serve in Vietnam, left the station. When asked why he had joined the Coast Guard, Rigazio replied because I can swim better than I can duck bullets. Rigazio doesnt regret his time at Harbor of Refuge, though he thought he had made some superior mad to be stuck out at the isolated station. Winters were bad, but summers, with sunsets, fishing, and visitors, were enjoyable.

Fishermen would sometimes ask if they could fish off the breakwater, and the crew didnt have any problem with that, especially when a six-pack of beer, which was banned at the lighthouse, was left behind. Rigazio would remove one can to make it a five-pack, and lower it into the lighthouses 4,000-gallon fresh-water tank. Wed have a hook, Rigazio explained. Wed open the lid up, fish around with the hook and pull up a five-pack. And that's how we kept our beer cold. And out of sight out of mind. Angelo Rigazio later served as president of The Delaware Bay Lighthouse Keepers and Friends Association and provided commentary on lighthouse boat tours offered by the organization.

In the years after automation, Harbor of Refuge Lighthouse received only periodic maintenance, and then only the most essential repairs were made. The lighthouse did receive a major overhaul in 1998-1999, when the stations exterior metalwork and concrete foundation were rehabilitated at a cost of roughly a quarter million dollars.

On April 1, 2002, the non-profit Delaware River and Bay Lighthouse Foundation (DRBLHF) signed a twenty-year lease on Harbor of Refuge Lighthouse with the Coast Guard. Just over a year later, on June 21, 2003, the lighthouse received its first tour group, whose members were allowed a rare glimpse into an offshore lighthouse. The ambitious foundation became the official owners of the lighthouse in 2004, when the tower was transferred to DBRLHF under the guidelines of the National Historic Lighthouse Preservation Act of 2000. Seasonal tours of the lighthouse are offered by DBRLHF each year as conditions permit.

Harbor of Refuge Lighthouse may be endangered due to the poor condition of the breakwater on which it rests. In 2007, Congress appropriated $340,000 so the Army Corps of Engineers could conduct a detailed study of the damage and recommend how to stabilize and repair the breakwater. Through the efforts of DBRLHF, the U.S. Army Corps of Engineers awarded a contract for nearly $3 million in repairs to the 110-year old Harbor of Refuge Breakwater wall under and near the lighthouse. This work was carried out in 2011.

For a larger map of Harbor of Refuge Lighthouse, click the lighthouse in the above map.

A distant view of Harbor of Refuge Lighthouse can be had from Cape Henlopen State Park. To reach the park, take Highway 9 north through Lewes and then continue past the ferry terminal and into the park. The best place from which to view the lighthouse is in the northeastern end of the park.

Tours of the lighthouse are offered on select days during the summer and early fall by the Delaware River & Bay Lighthouse Foundation. Fisherman's Wharf in Lewes offers cruises that may pass by the lighthouse.

The lighthouse is owned and managed by Delaware River & Bay Lighthouse Foundation. Grounds/tower open during tours.

Find the closest hotels to Harbor of Refuge Lighthouse


The color photographs on this page show the lighthouse before and after the Masonite covers on the tower's windows were removed by DBRLHF.