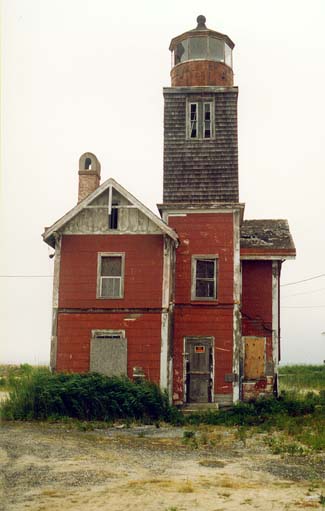 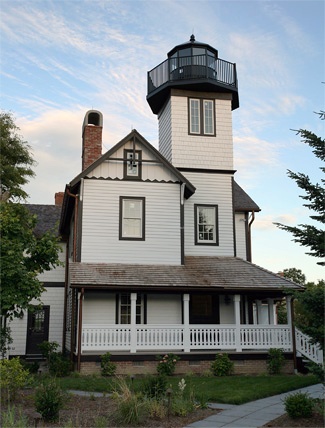 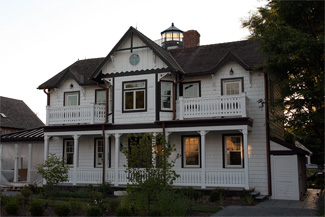 In 1831, three lighthouses were built in Delaware, each one of them at the mouth of a small river that flowed into Delaware Bay. Bombay Hook Lighthouse was constructed at the entrance to the Smyrna River, and the rivers marked by the other two are readily apparent from the names of their lighthouses: Mahon River Lighthouse and Mispillion River Lighthouse.

Congress authorized $1,500 for the construction of Mispillion River Lighthouse on March 3, 1831 to help guide vessels to the inland port of Milford, where over the years more than 400 ships, mostly sloops and two and three-masted schooner, were built and christened. Prolific lighthouse builder Winslow Lewis signed a contract on August 26 of that year to build the lighthouse on land purchased from Governor Charles Polk and his wife Mary Elizabeth for the token sum of $5. Completed by October 19, 1831, the lighthouse consisted of a lantern, fitted with six lamps backed by spherical reflectors, set atop the keepers dwelling. Thomas Carlisle was appointed the first keeper of the lighthouse.

During an inspection of the station in 1838, William D. Porter reported that the lighthouse, like so many of those constructed by Lewis, was badly built and nearly in ruins. Mispillion Creek could only be entered around high tide when it had about nine feet of water at is mouth. At low tide, the entrance to the creek had only two feet of water, and shoals that extended offshore for about two miles had only slightly more water covering them.

After explaining that the trade at Milford was sufficient for the Legislature of Maryland to allow a company to levy a tax on all vessels entering Mispillion Creek in order to keep the mouth of the creek open, Porter made the following suggestions: I therefore respectfully suggest that the miserable building at this place may be pulled down, and one erected in its place that will answer the purpose, and at the same time be a good and substantial building. I also recommend that the tower be so constructed as to show at low tides two lights, and that at high tides the lower light may be extinguished or shut in; by this means vessels will know exactly at what time they may venture over the bar at night. I also recommend a day tide mark, that vessels may know the height of the tides at all hours of the day.

A new lighthouse was built in 1839 in the same configuration as the previous one, a keepers dwelling surmounted by a short tower and lantern room. At this time, the appointments of lighthouse keepers was very political, and keepers occasionally lost their jobs due to their party affiliation. A newspaper article dated December 3, 1844 noted that William Jacobs, a good Whig, had been removed as keeper of Mispillion Lighthouse and that Charles Hamm, a Loco Foco, had been appointed in his stead. Loco Foco was a radical wing of the Democratic Party that supported the complete separation of government and banking.

In 1855, a fifth-order Fresnel lens, shining through an arc of 180°, was installed in the lantern room, replacing the array of lamps and reflectors.

The Lighthouse Board recorded the following on the lighthouse in its Annual Report for 1857:

It is reported that the light at Mispillion, in Delaware bay, is unnecessary even for the local interests of that vicinity. It is located at the mouth of Mispillion creek, which has at its entrance a depth of only one foot water at low tides. Only a few small flat bottomed vessels run in and out of this creek. For the general navigation of the bay this light is useless, and its discontinuance is respectfully recommended.

The lighthouse was deactivated in 1859 and subsequently sold for $135 and relocated to Walnut Street in Milford.

Apparently the navigability of Mispillion River changed over time, for the Lighthouse Board in its Annual Report for 1872 requested an appropriation of $5,000 for re-establishing a small light-house near the river entrance. By the following summer, the lighthouse was completed, and the light from the towers sixth-order Fresnel lens was exhibited for the first time on June 15, 1873. Just a year later, an additional $5,000 was allocated for the construction of a brick cistern and the addition of four rooms to the dwelling. In its final form, the lighthouse consisted of a two-story, L-shaped dwelling with a square tower positioned in the intersection of the wings. The tower contained the structures staircase and rose an additional story to display the light at a height of forty-eight feet above the bay.

Even though the lighthouse was located on a bay, the beachfront property was subject to erosion during high tides and winter storms. The first record of the station needing a seawall or dike was noted in the Annual Report of the Lighthouse Board for 1874, where $4,000 was requested for protecting the station. The following excerpts from the Boards annual reports show that while the dike was constructed in 1877 erosion was a recurring problem.

In 1893, a narrow red sector was placed in the light to mark the line of turning into Mispillion Creek.

The 1873 Mispillion River Lighthouse only had three keepers during its years of service. James H. Bell, a Civil War veteran, served from June 9, 1873 until April 4, 1881. Henry B. Spencer took over next and remained at the station until his death on February 21, 1896. The final keeper was Walter P. Graham, who served until an automated acetylene light was installed in the tower in 1911. All these keepers were paid an annual salary of $500. Graham remained at the station as a caretaker for a brief period after automation, before Alex Still started serving as the stations custodian for the token sum of $60 per year.

On December 29, 1929, Mispillion River Lighthouse was deactivated, having been replaced by a sixty-foot steel skeleton tower that was relocated from Cape Henlopen, where it had been in service since 1924. Alex Still continued to serve as caretaker for Mispillion Lighthouse until 1932, when the lighthouse and all but 0.1866 acres around the steel tower were sold to private parties.

After passing through several hands and receiving little attention, the lighthouse, along with a restaurant and marina, was sold to Galen and Eileen Stauffer on January 28, 1991. During the first week of the following January, a severe storm inundated the area with eight feet of water and swept the restaurant and tackle shop a mile inland. Amazingly, the older lighthouse didn't budge an inch. Undaunted, the Stauffers repaired the marina and constructed a sixty-seat restaurant atop elevated pilings. Turning a profit proved difficult, and the weary couple placed the site up for sale in 1998 for $549,000. By then, the lighthouse had been reduced to just a wooden shell.

In early 2001, it appeared there was hope for the dilapidated lighthouse, when Merritt Sam Burke III, a local lawyer, announced he was planning to purchase the property and was willing to work with a non-profit organization to restore the historic structure. An enthusiastic group of supporters soon formed the Keepers of Mispillion Lighthouse, and in September of 2001, Burke announced he had purchased the lighthouse from the Stauffers.

On April 18, 2002, Burke broke the news that he would no longer be working with the non-profit following an acrimonious dispute with locals over the zoning for a nearby historic fort that he owned. Less than a month later, storm clouds for the lighthouse literally appeared on the horizon, and on the morning of May 2 a lightning bolt struck the top of the tower. The upper portion of the tower and much of the lighthouses interior were charred in the resulting fire.

But something positive for the lighthouses future occurred that same day, when John and Sally Freeman purchased a building lot in Lewes Shipcarpenter Square, a neighborhood reserved for residences consisting of relocated historic structures. A few days after the purchase, Sally saw a picture of the damaged lighthouse in a local newspaper, and the couple had soon contacted the Burke family and started negotiating a deal. Later in 2002, the remains of the lighthouse were removed to an undisclosed location. Lighthouse enthusiasts believed the beacon was lost forever, but in July 2005 a modern lantern, costing over $53,000, was placed atop a reconstructed and expanded Mispillion River Lighthouse in Shipcarpenter Square.

The iron tower that replaced Mispillion Lighthouse at the mouth of Mispillion River was removed in 2016.

For a larger map of Mispillion Lighthouse, click the lighthouse in the above map.

The iron tower that replaced Mispillion Lighthouse at the mouth of Mispillion River was removed in 2016 and is no longer adjacent to DuPont Nature Center.

The house that incorporated parts of Mispillion Lighthouse is located in Shipcarpenter Square in Lewes and can be viewed from Burton Avenue.


The old skeletal tower still remains near the mouth of the Mispillion River. The Burke family sold the site to the State of Delaware in 2004 for $1.2 million. The area is run by the Department of Natural Resources & Environmental Control and has been developed into a research center for the study of horseshoe crabs.