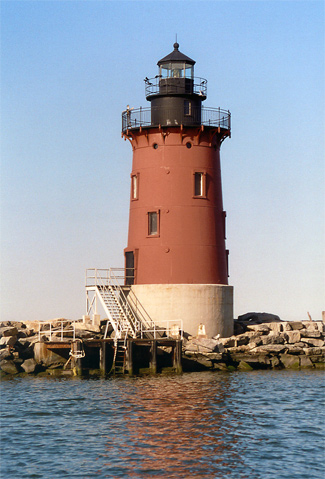 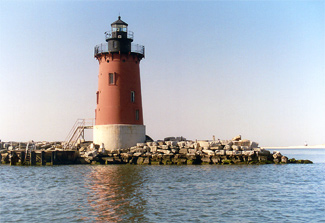 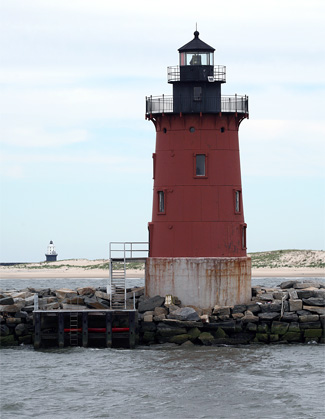 The Atlantic coast, from Cape Charles, Virginia to Sandy Hook, New Jersey, affords no natural safe harbor for large sailing vessels during storms. Although the entrance to Delaware Bay is situated nearly in the middle of this stretch of coast, conditions there were typically not much better given the vastness of the bay. In the early 1800s, mariners pleaded for a breakwater to be constructed just inside Cape Henlopen, on the southern side of the bay, as a refuge from rough seas. The first appropriation for the project was made in May 1828, during the administration of John Quincy Adams, and the first stones were being set in place the following summer. Given the technology of the time, this was a massive undertaking. Only the stone breakwater in Cherbourg, France would be longer than the planned Delaware Breakwater. Over 835,000 tons of stone, which included pieces ranging in size from ¼ to 6 tons, were quarried near the Hudson and Brandywine Rivers and shipped to Lewes, Delaware. When completed in 1869, the breakwater was 2,586 feet in length, had an average width of 160 feet, rose to a height of fourteen feet above low water level, and had cost the government $2,123,000. As part of the project, a stone structure with a length of 1,400 feet was built 1,350 feet to the west of the breakwater to serve as an icebreaker.

During the construction of the breakwater, a light comprising four lamps was displayed atop the superintendents dwelling to mark the navigational hazard. On March 3, 1849, Congress appropriated $10,000 for constructing a foundation and a lighthouse on the west end of the breakwater to help vessels enter the gap between it and the icebreaker. This structure consisted of a stone keepers dwelling topped by a lantern wherein six lamps and an equal number of fourteen-inch reflectors were used to produce a fixed red light at a focal plane of thirty-four feet. The keepers dwelling was built atop stone arches at sufficient height to be out of danger from the sea.

In 1853, Major Hartman Bache of the Topographical Engineers sent the following request for a fog bell on the breakwater to the Lighthouse Board:

The benefits of the harbor of the Delaware breakwater can never be fully available until the means are supplied, through sound, for entering it in thick and foggy weather, as these are now afforded through light by sight. Both ends of the principal work should properly be occupied by a fog-bell; but as the southern or cape end is not yet built up to the full height, this useful help to navigation should at present be confined to one at the present light.

Congress provided $800 on August 3, 1854 for a fog signal on the breakwater, and a fog bell rung by machinery was established the following year. The year 1855 also saw the light upgraded to a fourth-order Fresnel lens that produced a fixed light varied by flashes.

The work of filling the gap between the breakwater and ice breaker began in 1882. This extension placed the original lighthouse near the middle of the breakwater, but since it also served as a front range light to guide ships into Delaware Bay, it continued to operate after the closing of the gap was completed in 1898. The breakwater was a popular site during storms, when as many as two hundred vessels could be found safely anchored behind its protective arm.

In 1825, Cape Henlopen Beacon was established to mark the tip of the cape, which had grown several thousand feet north of the colonial Cape Henlopen Lighthouse. The conical tower, which served as the first Cape Henlopen Beacon, was replaced in 1864 by a screwpile lighthouse, placed even farther to the north to mark the capes transient tip. When erosion threatened this lighthouse, the Lighthouse Board decided to place a lighthouse on the solid footing available at the east end of the nearby Delaware Breakwater and abandon the lighthouse on the fickle cape. Cape Henlopen Beacon was discontinued on October 1, 1884, and a temporary frame beacon was established on the east end of the breakwater the following April while work was carried out on a permanent iron tower.

Stones were removed from the breakwater to the depth of eleven feet to form a pit for a concrete foundation, and the ironwork for the tower, which had been provided at a cost of $5,875, was delivered to Lewes by July 1885. The tower consisted of four stories to house the keepers, topped by a circular watchroom and an octagonal lantern room. Work had progressed to the point that the light could be displayed for the first time on October 2, 1885, though the stations Daboll trumpet fog signal would not be operational until November, and work on the towers brick lining and interior woodwork was not completed until December. The finished tower, given a coating of brown paint, stood fifty-one feet high from its base to the focal plane of its black lantern. A work crew returned the following year to erect a permanent wharf and oil house on the breakwater.

In the early morning hours of January 19, 1892, the Mary Rogers arrived at the entrance to Delaware Bay during a heavy northeast gale accompanied by rain and sleet. The vessel, encased in a layer of ice, sought protection behind the breakwater and anchored a few hundred feet from the east end lighthouse. The ships two anchors were set, and the exhausted crew gathered inside to warm themselves. Just before 6 a.m., the cable attached to the smaller anchor parted, and the vessel drug its remaining anchor until it grounded against the outside wall of the breakwater.

With the Mary Rogers taking on water, its crew quickly lowered the yawl and found that with its bow tied to the larger vessel, the stern of the yawl just reached the breakwater. Using this makeshift bridge, the captain and three crewmembers scurried to safety. Unwisely, the cook and sailing master chose to gather some personal effects before attempting to escape the floundering ship. The cook then jumped into the yawl and landed with such force that his feet broke through its frail planking. Picking himself up, he was able to scramble up the breakwater, but William Landrey, the sailing master, remained aboard the Mary Rogers paralyzed by fright.

By now, the yawl was in pieces, and Landreys companions pleaded with him to jump into the turbulent sea and swim towards them. Landrey soon had no choice in the matter, as the shattered schooner rolled on its side and waves began to sweep over the vessel. The 1892 Annual Report of the United States Life-Saving Service included a detailed account of Landreys dire circumstances. Evidently, stupefied by his appalling situation, Landrey clung to the rigging, making no effort to save himself, while those already on the stones, their numbers increased by the arrival of the two light-keepers, were powerless to aid him. The waves eventually pried Landrey loose from the rigging and deposited him in a small cavity in the stone breakwater. Linked hand in hand, the men on the breakwater managed, with much difficulty, to reach the injured Landrey and move him to safety.

The lighthouse keepers escorted the crew to the protective confines of the nearby tower, and then one of the men made the perilous, half-mile trek to the telegraph office, located adjacent to the west end lighthouse, to summon a doctor. Around 10 a.m., a Doctor Orr finally reached the lighthouse aboard a tugboat and labored to resuscitate Landrey, who had suffered a dislocated shoulder and severe lacerations. According to the captain of the Mary Rogers, Landrey was old and feeble and had been in poor health during the voyage. Given these conditions, there was little the doctor could do to save Landrey, and he passed away at the lighthouse.

The breakwater lighthouses fog signal was typically in operation for an average of between 400 and 500 hours a year, but for the last half of 1886 and first half of 1887 the signal was blasting for an amazing 912 hours.

Henry C. Wingate served as second assistant keeper of the light on the east end of the breakwater from 1907 to 1911, and then returned and served as head keeper of Delaware Breakwater Lighthouse from 1914 to 1918. In October 1914, Keeper Wingate sent the lighthouse inspector the following report of a rescue he and one of his assistants performed:

I have the honor to report that on 10-24-14, at 6:30 p.m., H.P. Marshall, 1st Asst. Keeper and myself rendered assistance to a disabled motor boat occupied by 4 men, from drifting to sea. Engine out of order, leaking badly, half full of water and only one oar. Hearing them call for help, we lowered the station boat and rowed to them, towing them to the station. Bailed out their boat, but were unable to start engine.

Through the cooperation of the captain of a fishing schooner, we had them towed ashore by his power boat.

The only man in disabled boat that understood handling same was in an intoxicated condition.

Delaware Breakwater Lighthouse was automated in 1950, after an electric cable was run to the tower from shore.

In September 1996, the Coast Guard declared Delaware Breakwater Lighthouse to be excess property, and it was turned over to the General Services Administration for disposal. The State of Delaware expressed interested in the beacon and was eventually granted ownership. In 2001, the lighthouse was leased by the state to the Delaware River & Bay Authority, which is a bi-state agency whose operations include the Cape May  Lewes Ferry and the Delaware Memorial Twin Bridges. In 2004, a partnership between the Authority and the Delaware River & Bay Lighthouse Foundation (DRBLHF) was forged to finally realize the long-held goal of opening the breakwater beacon to the public.

In December 2004, members of DRBLHF braved the winter weather and spent a day cleaning up the interior of the lighthouse and repairing the watchroom door. Donning protective suits and breathing through masks or respirators, the ambitious crew removed years of accumulated bird guano and dirt. As the sun was setting, the roughly ten-member work crew left the lighthouse in a noticeably improved condition. The following spring, the first-ever public tour of Delaware Breakwater Lighthouse was offered by DRBLHF. The tour had a great mix of folks who were so thirsty to learn about the Breakwater, said Ruth Africa, DRBLHF board member and tour chairperson. We heard a lot of Wows! especially as they climbed the ladder into the lantern room.

There are few people who can truly understand what keepers experienced living day in and day out in a four-story, metal cylinder, occasionally beat upon by the sea. The only option they had for stretching their legs was to pace back and forth on the short, wooden dock or to walk countless circles on the watchroom gallery. Now thanks to the periodic tours offered each summer by DRBLHF, visitors can at least sample the highlights of the keepers life: an amazing view, fresh air, and separation from the often hectic life on the shore  just a few hundred yards away.

For a larger map of Delaware Breakwater Lighthouse, click the lighthouse in the above map.

This light can be viewed from Cape Henlopen State Park. To reach the park, take Highway 9 north through Lewes and then continue past the ferry terminal and into the park. The best place from which to view the lighthouse is in the northeastern end of the park.

Tours of the lighthouse have been offered on select days during the summer and early fall by the Delaware River & Bay Lighthouse Foundation. In 2017, Cape Water Tours started offering tours that offer the chance to enter the lighthouse. Fisherman's Wharf in Lewes offers cruises that may pass by the lighthouse.

The lighthouse is owned by the State of Delaware and managed by Delaware River & Bay Lighthouse Foundation. Grounds/tower open during tours.