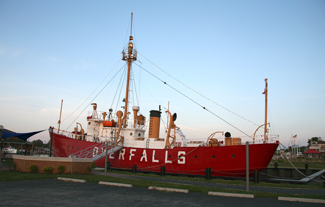 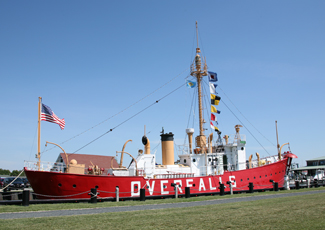 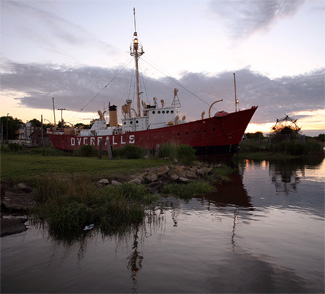 The Overfalls Lightship Station was located near the mouth of Delaware Bay, roughly three miles east of Cape Henlopen and 8.5 miles southwest of Cape May, and marked the Overfalls Shoal where the shallowest spot had a depth of only ten feet. Just four different lightships serviced the station between 1898 and 1960, when a buoy was used to mark the location. LV 101/WAL 524 had the longest tenure at the station, being anchored there from 1926 to 1951, and is now permanently docked at Portsmouth, Virginia where it is open to the public as a museum.

WLV-605 bore the station mark OVERFALLS on her sides from when she was built in 1951 until the station was discontinued in 1960. A crew of fifteen was assigned to WLV-605 when a reporter visited her in 1955. One seaman and an engineman were on watch at all times, and a four-hour watch was typically served followed by eight hours off. The men lived aboard for twenty-one days and were then treated to an eight-day leave.

Seaman Murphy explained that during his watch he had to keep an eye on the surface-search radar, and if a ship approached within a half mile on a collision course, he was required to sound the general alarm. The crew didnt mind an occasional false alarm, as ones chances of surviving a collision was much better being topside and outfitted with a life jacket than asleep in a bunk. Still, when the alarm was rung, the profanity was often choice as the men stood on deck, often barefooted and in their skivvies, and witnessed a monstrous black shape pass within yards of the lightship.

Since the Overfalls Lightship acted as a mid-channel marker, traffic near the vessel was common. In October of 1954, a large tanker staved in the lightships bow and knocked it a full quarter mile off station. The lightships beacon blinked on for ten seconds and off for five seconds, while the fog horn, when necessary, sounded for 1.5 seconds, followed alternately by silence intervals of three and fourteen seconds. WLV-605 was also equipped with a radio beacon that sent out a dot-dash-dot signal on the 1st, 4th, 7th, and 31st, 34th, and 37th minutes of every hour.

An amateur ham radio station, K3CGA, was established on the lightship to help boost morale. By contacting a ham operator on shore, the men were often able to speak to their wives for hours at a time. A movie projector was also brought aboard in 1955 to help the man pass the time.

The lightship which bears the Overfalls insignia today, LV 118/WAL 539, never actually served at the Overfalls station. Built under contract by Rice Bros. Corporation of East Boothbay, Maine, LV-118 was the last lightship completed by the Lightship Service, though the Coast Guard, which absorbed the service in 1939, would build another six lightships. The hull of LV-118 was subdivided into an unusually large number of water-tight compartments below the main deck to reduce the risk of the vessel's sinking in the event of a collision. LV-118 was equipped with diesel engines for propulsion and to power its radiobeacon, compressed-air fog signal, warning whistle, and its powerful masthead light. The radiobeacon and fog signal were synchronized for distance finding.

The ships first assignment after it was launched on June 4, 1938, was to Cornfield Point, located in Long Island Sound roughly three miles from the Lynde Point Lighthouse and the entrance to the Connecticut River. While many lightships were armed and used as examination vessels during World War II, LV-118 remained on station throughout the conflict. In 1957, a lighted bell buoy was placed at Cornfield Point and LV-118 was reassigned to the Cross Rip Station, where it marked the shoal of the same name found just over seven miles offshore from the Cape Poge Lighthouse on Marthas Vineyard.

Following four years at Cross Rip, LV-118 remained in Massachusetts but was transferred to the Boston Station, where it was anchored just over six miles east of Boston Lighthouse to mark the approaches to Boston Harbor. LV-118 was decommissioned on November 7, 1972, after receiving significant structural damage during a storm in December of 1970. In 1973, the lightship was donated to the Lewes Historical Society, who berthed the vessel along the Rehoboth Canal in Lewes, Delaware and gave her the name of the closest lightship station - Overfalls.

In 1999, the Lewes Historical Society reluctantly decided to sell the lightship due to upkeep expenses and liability issues. When a potential sale fell through, a group of local citizens, later officially called the Overfalls Maritime Museum Foundation, stepped and purchased the lightship. An ambitious lot known as the Dirty Hands Gang, has worked tirelessly to clean, prep, paint and restore the lightship. When additional expertise was needed, contractors were hired to help with complex tasks such as electrical wiring and asbestos removal.

After over 15,000 hours of donated labor, the gang had completely rehabilitated the lightship, inside and out, by 2007, leaving just the restoration of the hull below the waterline. Several shipyards were contacted to dry-dock the lightship and repair its hull, but Colonna Shipyard of Norfolk, Virginia with a bid of $270,000 was eventually selected. Starting on September 2, 2008, a hydraulic and mechanical dredger were used to free the Overfalls from the buildup of years of mud around her hull. By the end of the month the lightship was floating free at her berth and had been inspected by a marine surveyor, allowing the Coast Guard to issue a tow permit.

Early on Tuesday, October 14, a tugboat provided courtesy of Wilmington Tug Inc. extracted the lightship from its birth and towed the vessel out into the Delaware Bay  the first step in its 275-mile voyage that would take it up Delaware Bay, through the C&D Canal, and down the Chesapeake Bay to Norfolk. A tracker was installed aboard the lightship so enthusiasts could monitor the vessels position while reading a blog posted by members of the ten-man crew aboard the lightship.

Claymont Steel donated plates that over a period of three months were welded onto the pitted and corroded areas of the Overfalls hull. The lightship was refloated on January 19, 2009, but a leak was found that delayed the completion of the work until early March. The Overfalls remained in Norfolk until favorable springtime weather allowed her return to Lewes.

In April of 2009, Delaware Governor Jack Markell and Transportation Secretary Carolann Wicks included the construction of a permanent berth for the Overfalls Lightship on the final list of projects to be paid for by over $100 million in federal stimulus funds. This project, which will receive $450,000, is believed by the officials to be a worthy tourist attraction that will go a long way in assisting with the economic revitalization of the local area. Coupled with $350,000 that the Overfalls Maritime Museum Foundation has already raised, the federal funds will provide enough money for a fitting new home for the restored Overfalls. A contract for the work was awarded to Kuhn Construction of Hockessin, and the project was completed in early 2010.

After seven months at the shipyard in Norfolk, the lightship returned home to Lewes on May 31, 2009 via the Atlantic Ocean rather than the Chesapeake Bay, which shortened the length of the journey. With a Coast Guard escort, the Lewes fireboat, a flotilla of local boaters, and hundreds of well-wishers looking on, a pair of tugboats maneuvered the lightship into its slip, where it will soon be open to the public. A collection of antique Lyle guns provided by Richard Perez gave a resounding welcome to the returning lightship.

An event was held at the lightship in September of 2010 to celebrate the completion of a new slip and new park for the historic vessel. A large compass rose built into the walkway near the starboard side of the ship features a thirty-inch-tall monolith in its center bearing the names of those inducted into the Delaware Maritime Hall of Fame.

In 2011 Lightship Overfalls became the thirteenth National Historic Landmark in Delaware. The Lightship Overfalls is a historic gem in Delaware that has reached the important milestone of being named a National Historic Landmark, the first in Sussex County, said Senator Tom Carper in announcing the designation. I encourage those interested in learning about our countrys rich maritime history to visit the ship, which is here today because of a joint-effort between federal and state governments, The Lightship Overfalls Foundation, and thousands of hours of work done by volunteers to overcome obstacles of a silt-filled slip and rotting hull to the beautiful ship it is today.

Lightship Overfalls was officially dedicated as a National Historic Landmark during a ceremony held at the lightship on October 5, 2011.

For a larger map of Lightship Overfalls LV 118/WAL 538 Lighthouse, click the lighthouse in the above map.

From Business Route 9 (Savannah Road) in Lewes on the south side of the bridge crossing the Lewes-Rehoboth Canal, turn west on Front Street. After a couple of blocks, Front Street will become Pilottown Road, and the lightship is just beyond this point on your right.

Click here for information on tours of Overfalls Lightship.

The lightship is owned by the Overfalls Maritime Museum Foundation. Grounds open, lightship open in season.