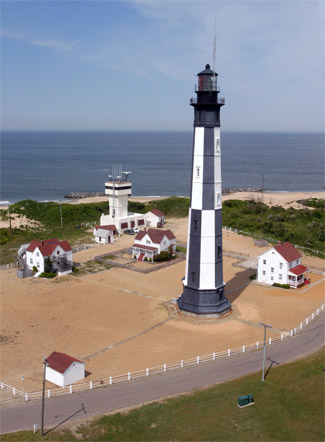 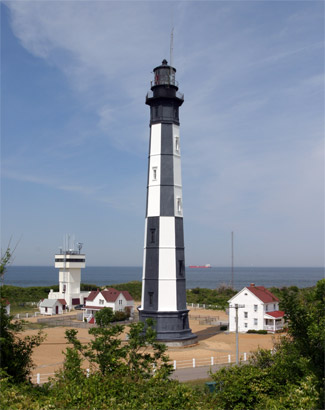 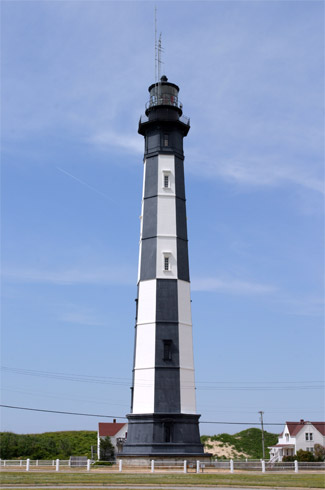 During an inspection of Cape Henry Lighthouse in 1872, troubling structural damage was noted. The inspector found large cracks or openings, extending from the base upward, on six of its eight walls. Four of these, he reported, are apparently less dangerous than the other two, and alone would not warrant any great apprehension of danger, but the latter, those on the north and south faces, where the strength of the masonry is lessened by openings for windows, are very bad, extending from the base almost to the top of the tower. A new dwelling and first-order lighthouse were recommended as the existing tower was in danger of being thrown down by some heavy gale. A similar warning was repeated each of the following years until Congress finally granted an appropriation of $75,000 in June 1878 to replace Cape Henry Lighthouse. With funds finally in hand, the Lighthouse Board proved itself more than eager to begin the project. In its 1879 annual report, the board enthusiastically reported: The drawings and specifications for a new 1st-order light house are now completed and ready for distribution to bidders. Negotiations for six acres of land were also underway, and the search was on for contractors to complete the metalwork. As this new light was to be composed of enormous cast-iron plates bolted together, this was a tall order indeed (the tallest cast-iron, fully enclosed lighthouse in the United States, in fact). The board was emphatic that no unnecessary delay will be made in the prosecution of this important work, and they requested $25,000 more in funds to move the project along.

In 1880, the Lighthouse Board insisted that steady progress was being made, in spite of delays in the metalwork and land negotiations: ...about one third of the wrought iron work has been completed. The base section, comprising about 16 feet in height of the tower, is nearly completed. An 1880 photograph shows construction materials strewn around a base section just starting to emerge from the sand, with the reliable old stone tower standing staunchly in the background.

A pier was completed near the construction site in August 1880, and soon thereafter the broken stone for concrete, the hoisting-engines and steam concrete-mixer, 600 barrels of imperial Portland cement, brick for the fog-signal building and the fog-siren machinery, with the exception of the boilers, were landed. After enduring these tons of bricks and machines, the pier proved too fragile for a load of tower ironwork, and the bridge leading from the loading dock to the shore broke under the strain of a fully loaded car. The remainder of the off-loaded ironwork was transported to Norfolk by a hastily procured schooner and placed in storage. Just hours after the load was removed, the pier collapsed entirely.

The failure was not totally the fault of the pier-builder; examination of the wood revealed that a boring worm had devoured much of the structure, weakening it considerably. The Lighthouse Board decided that rather than rebuild the pier a tramway would be extended four miles to Lynnhaven Inlet, where scows (flat bottomed freight boats) would be used to land construction materials.

When work was suspended for the winter in November 1880, a brick fog signal building, covered by a corrugated iron roof, had been completed, and one worker remained behind to watch over the property and supplies. The first-class steam siren housed in the fog signal building commenced operation on December 1, 1880.

Work on the lighthouse resumed on May 30, 1881 and progressed smoothly from this point forward. By mid-June the extensive preparatory work had been completed; this included relaying portions of the tramway that had washed out and putting hoisting engines in order, erecting derricks and preparing cars for hauling. The remaining metal plates, their completion long delayed by inept contractors, were finally ready to be shipped from their foundries in mid-July, and a first-order Fresnel lens was awaiting shipment from the Staten Island depot to Virginia.

A course of cut granite was laid atop a massive concrete foundation to serve as the base for the ironwork. Having been marked in the foundry, the massive iron pieces were quickly set in place in the tower  the bottom section of the tower was commenced on July 8, and the sixth and final section was in position on September 8. During the remainder of September, the service and watch rooms were completed, and the interior of the tower, consisting of the stairway, landings, and lining, was finished on November 15. The first-order lens was tested on November 27 and found to work admirably. Freshly painted, the lighthouse was officially turned over to Keeper Jay Edwards on December 15, 1881 and placed in operation that evening with its light shining at a focal plane of 157 feet and visible for up to 18 ¾ miles. In just one day, the old tower, which was left standing as a daymark and as a basis for coast survey triangulation, transitioned from a lighthouse to a historic landmark.

The two towers continue to stand side-by-side on the southerly Cape of Chesapeake Bay, one of the most important shipping channels in the nation. The vital ports of Norfolk, Newport News, Baltimore, and Washington are all accessed through Chesapeake Bay, and the Cape Henry lighthouses have provided over two hundred years of uninterrupted aid to navigation.

New Cape Henry Lighthouse is adorned with one of the most distinctive daymarks to be found on a lighthouse anywhere in the world. Its stark octagonal tower alternates between white and black on its various faces, and midway up this pattern is offset by one face, producing a checkerboard-like effect. The unique coloring distinguishes Cape Henry from the all-white tower of Cape Charles to the north and the redbrick tower at Currituck Beach to the south.

In July 1887, a system of magneto-electric call bells with an arranged code of signals was installed at the station to connect the tower, fog signal building, and dwellings, and in April 1888, a 79° red sector was placed in the lens to cover dangerous shoals at the entrance to the bay. In 1892, a brick oil house, capable of storing 500 five-gallon oil cans was erected near the lighthouse along with a summer kitchen.

Milton L. Odell replaced Jay Edwards as keeper of the new lighthouse in 1885, and it wasnt long before he was embroiled in controversy. Charges of neglect of duty, misappropriation of government property, and of offensive partisanship brought against Odell were disproved before the Lighthouse Board, but the men who sought Odells job didnt stop there. As Keeper Odell was returning to the lighthouse on horseback in December 1887 after being on sick leave in Norfolk, he was fired upon by three men. The keeper returned fire after recovering from the initial shock of the attack and believed he must have hit one of the assailants as he heard a cry of pain. As proof of the attack, Keeper Odell was left with two bullet holes in his gum coat.

During the twentieth century, Cape Henry Lighthouse saw many technological upgrades that have accumulated to make it the very modern aid to navigation station that it is today. In 1912, an incandescent oil-vapor lamp replaced a lamp with five concentric oil-burning wicks, and ten years later, the light was converted to electricity and its characteristic changed from fixed white to a group of three flashes every twenty seconds. At the time of electrification of the light, experiments were conducted at Cape Henry to determine what type of bulb and how many were needed, as it was feared that a single electric bulb would not provide sufficient light to reach all the prisms of the lens.

A radiobeacon was placed in commission at Cape Henry on June 1, 1923, making it one of the first lighthouses in the United States to deploy such a device. After an electrically operated oscillator replaced the first-class siren, it was possible to conveniently synchronize the fog signal and radiobeacon, and on February 26, 1929, a distance-finding test was conducted off Cape Henry and found that by noting the difference in time between the reception of the radio signal and the audible fog signal a vessel could determine its distance from the lighthouse with sufficient accuracy for navigation. The setup was officially commissioned on May 23, 1929 as the country's first synchronized distance-finding system.

Cape Henry became home in 1934 to a fog signal testing laboratory, where investigations were conducted for the benefit of the entire Lighthouse Service. Indeed the station has been of great scientific importance, as experiments in radar and wind-generated electricity were also conducted there. In 1996, Cape Henry leaped into the twenty-first century when a Differential Global Positioning System was installed.

Since 1984, Cape Henry Lighthouse has been fully automated, rendering the presence of a keeper unnecessary. Budget restrictions have forced the U.S. Coast Guard to examine the prohibitive costs of maintaining the historical integrity of the structure. The Coast Guard is responsible for 50,000 aids to navigation, only about 500 of which are lighthouses. In a memo from the late 1980s, the commander of the Fifth Coast Guard District defended his decision to continue maintenance of New Cape Henry Lighthouse: Yourecommended that we excess the structure and build a skeleton tower for the required optic.  As the program manager, it is my decision to retain this lighthouse as one of the major landfall aids for the Chesapeake Bay entrance. A skeleton tower would not present the same visual daymark as the current 165-foot tower."

Some within the Coast Guard proposed demolishing the tower, hoping that a historical society would then step in to save the lighthouse. Even without the threat of demolition, it seems this goal just might be achieved. In 2005, Virginias most experienced historic preservation organization, the Association for the Preservation of Virginia Antiquities (APVA), requested control of the lighthouse from the Coast Guard. APVA already runs the old lighthouse just 100 yards away, and if successful in obtaining the new one, they plan to open the iron tower for climbing, and the associated two keepers quarters for tours. Cape Henry would certainly become one of the top lighthouse destinations if this occurs.

For a larger map of Cape Henry (New) Lighthouse, click the lighthouse in the above map.

From Virginia Beach, take Route 60 (Atlantic Avenue) north. Route 60 will turn west near Fort Story, but continue straight on Atlantic Avenue into Fort Story. The lighthouse will be on your right about a mile after entering the fort. There will likely me an extensive security check to enter Fort Story, and you may be required to provide picture identification for those 16 years of age and over and possibly proof of insurance for your vehicle.

The lighthouse is owned by the Coast Guard. Grounds/dwellings/tower closed.


The Cape Henry Lighthouses appear in the movie "Hearts in Atlantis" when Bobby, Carol, and Sully go to the fair. The fair was staged at Fort Story, and when Bobby and Carol share their first kiss, the kiss by which all others in their lives will be judged, you can see the New Cape Henry Lighthouse, with its flashing Fresnel lens, in the background. The Old Cape Henry Lighthouse can also be seen in a later panoramic shot, and it strangely has a light in its lantern room.