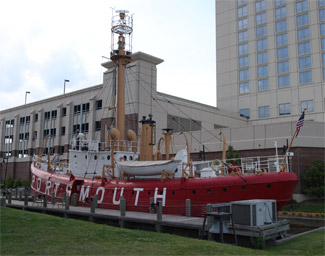 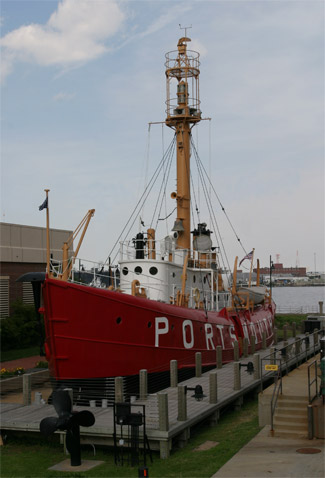 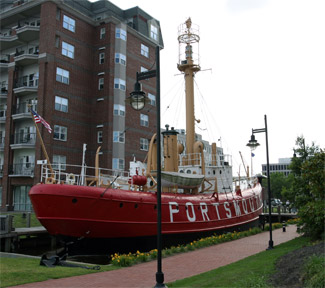 The lightship currently docked in Portsmouth, Virginia has a long and eventful history, dating back to its construction in 1915. The vessel was originally given the simple alpha-numeric designation of LV 101  such numbers were assigned to all lightships after 1867. This augmented the tradition of renaming the ships every time they moved to a new station, which made it nearly impossible to track an individual ship and its maintenance history.

Lightships still had their geographical names painted in very large white letters on red hulls, so that captains could recognize them from a great distance. LV 101, for example, was christened Charles shortly after its January 12, 1916 launch date, as it was then assigned to Cape Charles in Virginia. Other names for LV 101 include Overfalls, for her 1926 duty at Cape Henlopen, Delaware, and Stonehorse, for her last assignment to Stonehorse Shoal in Massachusetts in 1951.

LV 101 was built by Pusey and Jones of Wilmington, Delaware for $108,507. The vessel is 102 feet in length and displaces 360 tons of water. Its hull is of a steel whaleback design, which helps to keep it on an even keel in stormy seas. It was one of only two such rounded-hull lightships ever constructed. LV 101 was originally powered by a 200 HP Meitz and Weiss four-cylinder, two-cycle, direct reversing kerosene engine. Her top speed was eight knots, which she achieved with her four-bladed propeller.

The ships illuminating apparatus first consisted of a 500 mm lens with six flash panels set in a rotating motion by weight-driven clockwork. The light itself was derived from a kerosene lamp of 24,000 candlepower set inside a cylindrical lantern. LV 101 was equipped with a number of fog signals as well: a 6-inch air siren was on deck, complimented by a submarine bell and a thousand-pound bell which was operated by hand. The lightship had a sister ship, known simply as LV 102, and together they sported the novel feature of a hollow mast. This allowed the sailors protection from the elements as they ascended to service the lantern. Both ships also possessed a steel pilot house on the bridge, at the foot of the mast.

Portsmouth Lightship underwent a number of technological improvements over the course of its service. In 1917, the lamp illuminant was changed from kerosene to acetylene, and two years later the ship was equipped with a radio. In 1931, she was given a radiobeacon and a new ten-inch air whistle to serve as fog signal, and that same year the lamp was converted to electricity. Gone was the cylindrical lantern housing, replaced with two 375 mm electric lamps at 13,000 candlepower each. In 1944, it was the engines turn for refurbishment, and LV 101 was upgraded to a 315 HP Cooper-Bessemer diesel engine with a maximum speed of 8.2 knots.

LV 101 was decommissioned in 1964, after serving at three posts during her forty-eight-year lifespan. At this time Large Navigational Buoys, complete with lights and radio transmitters, were taking the place of the venerable lightships. Other competition for the lightships niche came from sturdy permanent structures dubbed Texas Towers, which were used at hazardous coastal locations. The purpose of lightships was to mark very dangerous areas which were too turbulent to sustain a vulnerable lighthouse. They were, however, very expensive to crew and maintain, and were usually replaced with sturdy buoys as these became available.

It was not long after her decommissioning that LV 101 was assigned to a new station. In 1964, the Portsmouth Chamber of Commerce sought ways to reawaken interest in their declining waterfront areas. LV 101 had been docked in Portland, Maine after her last stint in Nantucket, and this came to the attention of Portsmouth. The city sought the aid of Anthony Penello, a native of Portsmouth working as a fisherman in New England. He agreed to tow the lightship south to Virginia using his fishing vessel. Two days into the voyage, Mr. Penello encountered stormy seas stirred up by Hurricane Dora, which necessitated a hasty jaunt into the dangerous Nantucket Shoals. This shortcut saved the two ships ten hours and allowed them to beat the hurricane. They pulled into Portsmouth on September 7, 1964.

The lightship had not deteriorated much, having been on active duty as late as 1962. Nevertheless, it took volunteers nearly three years to repair and repaint the lightship and otherwise transform it into a museum piece. It was opened to the public as a museum in 1967 and was dry berthed close to the Portsmouth Naval Shipyard Museum. Though Portsmouth was never a lightship station, the word PORTSMOUTH was painted on the ships red hull in white letters to honor the city that saved the historic vessel.

The lightships volunteer staff is extremely dedicated to the lightships upkeep, and they regularly collect information from the numerous visitors who seek out LV 101. These visitors include engineers, sailors, and sometimes former lightship personnel, who are able to provide vivid accounts of life aboard such a vessel.

At one point, the staff worked with the Tidewater Maritime Heritage Living Association to stage re-enactments of daily life on a lightship. The routine could get somewhat monotonous, as it was broken only by the tender, the weekly supply and mail ship. Still, ships watches were only four hours long and allowed for leisure activities like reading, fishing, swimming and climbing the mast to build muscles. Another break from the monotony was storms, which could be quite dangerous for lightships. Vessels like LV 101 were moored only at the bow, so they could rotate during a storm. Sometimes the single anchor chain would break in really rough seas, and the ships engines were often not strong enough to keep it under control. One such ship, the LV 73, was lost with all its crew during a 1944 hurricane off the coast of Massachusetts.

The main deck of the lightship contains the crew and officers quarters, the ships galley, and the mess hall. The captains cabin contains a bed, porcelain sink, closet, and a desk with a nautical map spread upon it. Above the main deck there is the pilot house, radio room and the storm helm, which is a traditional brass ships wheel. The ship was primarily piloted from the Flying Bridge on the very top deck, which contains yet another brass wheel from which to survey the seas. The top deck also has two lifeboats, a fog horn and two air scoops to provide the crew with fresh air. On the starboard side of the bow hangs the ships 5,000-pound mushroom anchor. The mast sports a brass bell inscribed with USLHS 1915, standing for the United States Lighthouse Service and the 1915 casting of the bell.

In 1989, Lightship Portsmouth was granted National Historic Landmark status. The city of Portsmouth is uniquely suited for a vessel with this honor, as it is often cited as the birthplace of American lightships. In 1820, James Poole built the first U.S. lightship in nearby Hampton, Virginia. His vessel was assigned to service Wiloughby Spit, but was soon moved to Portsmouths Elizabeth River due to perilous conditions at the Spit. These first wooden lightships were a far cry from LV 101 and similar ships of its class. Simple boats with large lights on their masts, they were plagued by poorly trained and undisciplined crews, and were unassisted by any relief ships. This meant that if an early lightship was damaged, its position went unmarked, regardless of navigational importance.

In 1852, the Lightship Service itself was refurbished and placed under the command of maritime professionals, and the situation began to improve. As previously mentioned, the numbering system was developed in 1867 which allowed individual ships to be tracked across their various assignments. Crew conditions and training were upgraded as well, and the ships themselves were constructed of metal instead of wood. By the nature of their duty, lightships were subject to numerous collisions with wayward vessels, so they needed to be as sturdy as possible. In 1934, for instance, the ill-fated Titanics sister ship Olympia collided with LV 117 and sent her to the bottom, claiming the lives of seven of the ships eleven crewmen. LV 101 herself was rammed twenty-four times, with eight of those hits coming during her tenure at Cape Charles. Most of these accidents were glancing, minor blows, although an examination of the hull reveals their lasting effects.

For a larger map of Lightship Portsmouth LV 101/WAL 524 Lighthouse, click the lighthouse in the above map.

The lightship is owned by the Naval Shipyard Museum and Lightship Portsmouth Museum. Grounds/lightship open.


Along the Portsmouth waterfront, roughly 800 feet south of the lightship, is a pavilion housing the first-order Fresnel lens from Virginia's second Hog Island Lighthouse. Restoration of the lens and construction of the pavilion was funded by the Portsmouth Museums Foundation in cooperation with the City of Portsmouth and the Fifth Coast Guard District. The Fresnel Lens Pavilion was dedicated on November 5, 2003. While a day visit isn't bad, seeing the lens lit up at night is more impressive.