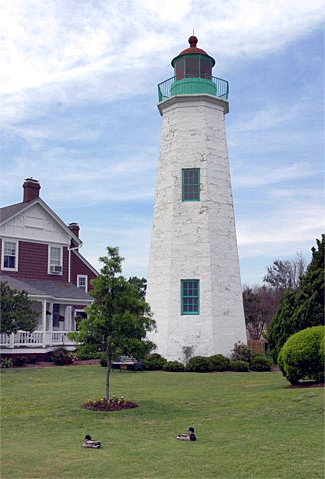 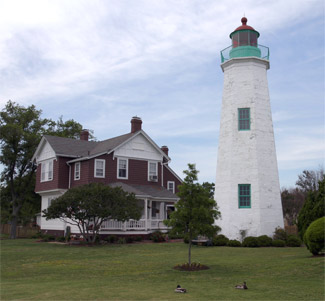 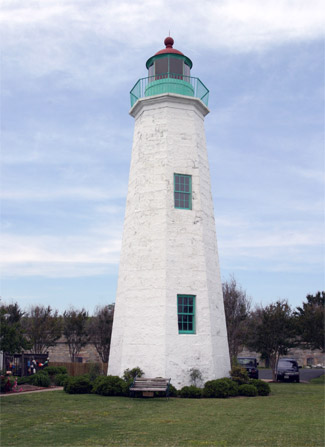 Old Point Comfort Lighthouse marks the entrance to historic Hampton Roads, a substantial harbor situated at the mouths of the James, Nansemond and Elizabeth Rivers, and stands on ground which has seen many a fort constructed nearby to defend this important waterway. The towers present neighbor, the Civil-War-era Fort Monroe, was preceded by colonial Fort George, which in turn was probably preceded by an even earlier fortification. A navigational beacon on Old Point Comfort was active as early as 1775 when John Dams, caretaker of the ruins at Fort George, was paid an annual supplement of 20 pounds to tend a light there. Some historians believe that Native Americans kept wood fires burning at the Point before that for the benefit of Spanish ships during the sixteenth century. With the establishment of the United States government and its ensuing lighthouse projects at places like Cape Henry, pressure mounted to build a permanent aid to navigation at Old Point Comfort. An early edition of the American Coast Pilot noted the 1798 law passed by the U.S. Congress that set aside $3,050 for a light at Old Point Comfort and proclaimed: We wish, for the security of navigation, that the important work may soon be undertaken, for the safety of our mariners. Between 1800 and 1801, Congress appropriated another $5,000 for construction costs, and contracted the services of Elzy Burroughs to complete the octagonal stone structure.

Burroughs completed most of the work on the lighthouse, which stands fifty-four feet high, during 1803. The tower possesses a spiral staircase composed of hand-cut stone, stacked strategically on top of each other. The stairs lead to a ladder that ascends to a trap door, beyond which is the lantern room. Ten oil lanterns, which consumed 486 gallons of oil each year, were set in reflectors to produce a light that could be seen from fourteen miles at sea.

President Thomas Jefferson sent the following note to Albert Gallatin, Secretary of the Treasury, recommending Eli Vickery be appointed keeper of the lighthouse:

Among the candidates for the light-house at Old Point Comfort, Captain Eli Vickery seems decidedly the best. There is a Mr. Bingham from Richmond well recommended, but it must be quite out of his line; whereas Vickery is an old sea-captain. Nothing is said of the politics of either, but both are recommended by the best Republicans. If you know no reason to the contrary, appoint Vickery.

Captain Vickery was appointed the first keeper of the lighthouse on February 11, 1804.

During the War of 1812, the lighthouse temporarily fell into British hands, when the Jack Tars and Royal Marines sailed into the Chesapeake. Frustrated in their efforts to seize the town of Norfolk, the invaders landed at Old Point Comfort and used the tower as an observation post. From there they went on to take and burn Hampton on June 25, 1813, and then torch Washington D.C. a few weeks later on August 14th.

After the war, Old Point Comfort was vastly transformed by both the federal government and private investors. The government erected Forts Monroe and Calhoun, the former on shore and the latter on a man-made island called Rip Raps situated in the middle of Hampton Roads. The clever Robert E. Lee, Lieutenant of Engineers, was transferred to Fort Monroe in 1831 and was instrumental during the next three years in helping complete construction on Fort Monroe, which is the largest stone fort ever built in the United States . Entrepreneurs built a few resort hotels and otherwise transformed the area into a vacationers paradise for the leading lights of a young American society.

On March 3, 1837, Congress appropriated $6,000 to move Old Point Comfort Lighthouse inside Fort Monroe, but at the last minute the work was deferred, and the tower remains outside the fortress to this day. A fourth-order, Henry-Lepaute Fresnel lens replaced the array of lamps and reflectors in 1854, reducing the consumption of oil to just one-tenth the former amount while producing a light of much greater power and brilliancy.

On July 20, 1855, the lighthouse received a companion structure  a fog bell mounted on a wooden tower to help guide mariners during periods of reduced visibility. The bronze bell was forty inches around and three feet high, and its ringing could be heard up to three miles away. Also that year, a sixth-order beacon light was added to the station to guide ships to anchorage inside Hampton bar, but this light was discontinued in 1869, being no longer of any service to navigation

While most east coast lighthouses were damaged, destroyed or at least put out of commission during the Civil War, the tower at Old Point Comfort was undisturbed during the conflict as Fort Monroe remained under Union control throughout the war. An observer perched on the lighthouses deck would have seen an impressive procession of historic events during the conflict. President Lincoln landed at the forts wharf in 1862 so he could witness Union troops take Norfolk. The legendary battle of the first ironclads, the USS Monitor and the CSS Virginia, occurred just offshore in Hampton Roads, and finally, at the end of the war, Confederate President Jefferson Davis was imprisoned in an artillery room near the light station.

Shortly after the start of the Civil War, William Davis escaped from a plantation in Hampton and then rescued his mother, wife, and seven children from other plantations and sought asylum with them inside the walls of Fort Monroe. Old Point Comfort was no stranger to slaves, as it was here in 1619 that the first twenty slaves in North America were unloaded and traded for food. The Union army enlisted numerous African American troops from those former slaves who sought refuge at the fort.

William Davis was appointed keeper of Old Point Comfort Lighthouse in 1870 and served in this capacity for eight years until being replaced in 1878 by John Jones, also a former slave, whose tenure of thirty years as keeper of the lighthouse was the longest. On the night of August 31, 1886, Keeper Jones noted that his clock stopped at 9:55 p.m., when the station experienced the effects of the major earthquake centered at Charleston, South Carolina. According to Jones, the shocks felt at Old Point Comfort lasted about two minutes and were accompanied by a rumbling noise.

In 1891, a new keepers house was built just south of the lighthouse to replace an existing dwelling, which was old and beyond economical repair. The keepers dwelling was connected to the forts water supply in 1893, and a new oil house and an iron bell tower were added to the station in 1896. Sixty running feet of four-inch sewer pipe was laid in 1901, and the resulting dug-up grounds were substantially re-landscaped with sixty-three assorted plants and eight packets of flower seeds. Keeper Jones was provided a lawn mower and 150 feet of garden hose to help him keep the grounds neatly manicured.

Improvements to the station continued to be made in the new century. An electrical fog bell striker replaced the stations mechanical striking mechanism in 1917, and the following year the illuminant used in the lighthouse was changed from oil to incandescent electric, which increased the lights intensity. With advances in aeronautics the station was designated an aerial landmark. The roof of one of the stations buildings was painted in a distinctive pattern and became part of a chain enabling pilots to find their way from Washington D.C. to Norfolk. In 1936, an experimental apparatus was added to control the fog bell. A beam of light was fired every two minutes from nearby Fort Wool onto a photoelectric cell at Old Point Comfort. If the beam failed to arrive, that meant it had been impeded by rain, fog, or snow, and the fog bell was activated.

The problem of competing coastal lights from hotels and attractions was tackled in an innovative manner in 1954, when a Coast Guard officer in charge of the lighthouse attached 250 watt bulbs to the end of five poles extending from the balustrade encircling the lantern room, so that they resembled spokes on a wheel. While this may have made the lighthouse more distinctive, one writer lamented that it made the light look like an amusement park ride...rather than a noble lighthouse.

Over the years, the characteristic of Old Point Comfort Lighthouse was altered several times. Originally fixed white, the light was changed to fixed red around 1900, and then in 1905 a white sector was used for a short time before the signature was changed back to fixed red through the entire arc of visibility. For many years now, the automated signal has shown a mixture of red and white light, with the white sector covering an arc of 133°. The pattern is arranged so that if a vessel sees red, its crew knows it is on a dangerous course.

Today, the lighthouse tower is a freshly painted white, topped by a dull red, domed copper roof and a lightning rod. The structure has four large double-pane windows, with bright green sashes and frames. The eye-catching green was rumored to be a contractual error that would soon be corrected, but it has remained for years. A solid steel door guards the base of the lighthouse, alongside a plaque denoting the tower as a Virginia National Landmark.

The keepers dwelling housed the families of two coastguardsmen until automation in 1973; presently it is the house of an Army Major. The house was described in an inventory of the station produced by the Army as stylistically eclectic, exhibiting influences from the Shingle Style of the 1870s, the Stick Style of the 1870s, a touch of Queen Anne, and a soupçon of Eastlake.

Old Point Comfort Lighthouse has been privy to events of great military importance since the War of 1812. In 1907, Teddy Roosevelts Great White Fleet set sail from nearby Hampton Roads for its cruise around the world, and on November 14, 1910, the first launching of a plane from a warship took place on the deck of the USS Birmingham in Hampton Roads. Today, the historic lighthouse still watches over the busy waterway frequented by vessels ranging from personal watercraft to aircraft carriers.

For a larger map of Old Point Comfort Lighthouse, click the lighthouse in the above map.

From Interstate 64, take exit 268, the exit just on the north side of the Hampton River, and drive northeast on Mallory Street. Turn right for 0.7 miles to Ingalls Road. Turn right at the second light onto E. Mellen Street and proceed for 0.6 miles, bearing to the right at the gate to enter the fort via McNair Drive.


Be sure and visit the Casemate Museum inside Fort Monroe where you can see where Jefferson Davis was held during the Civil War and learn about the fort's interesting history.