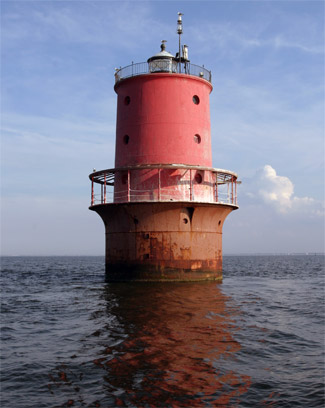 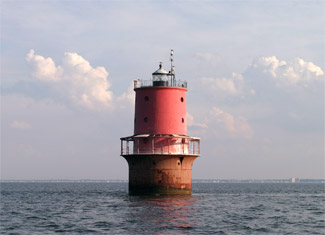 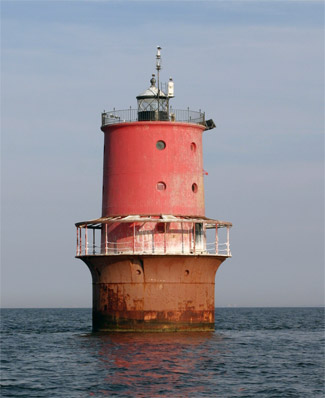 At the entrance to the vital waterways of Hampton Roads, there are two parallel sandbars named Wiloughbys Spit and Horseshoe Bar. For many years vessels navigating this highly trafficked area were warned of the bars by lightships, but by 1859 the Lighthouse Board had become enamored with screwpile lighthouses, which are literally screwed directly into the seabed. Wherever possible, the Lighthouse Board replaced the floating light vessels with these new permanent lighthouses, which were much less costly to maintain and staff. The thimble of Horseshoe Bar, which had but eleven feet of water over it at low tide, was chosen as the site for a screwpile lighthouse. This location was buffeted by strong easterly winds, so the Board took measures to ensure the stability of the lighthouse with a screwpile foundation of extraordinary strength surrounded by a generous amount of riprap. Construction began in the spring of 1872, but the fine, compact sand of the bars proved troublesome to the process of screwing in the seven piles  a center pile, surrounded by six piles arranged about it in the form of a hexagon. Work was delayed even more when a cast-iron column used for a follower on a pile broke and when one of the screws snapped because of defective casting.

On October 15, 1872, Thimble Shoal Lighthouses fourth-order light, which exhibited a fixed light varied every thirty seconds by a red flash, was shown for the first time, officially replacing Willoughby Spit Lightship, the last remaining lightship in the district. Located a mere three-and-a-half miles from Old Point Comfort Lighthouse, the screwpile lighthouse consisted of a wooden, hexagonal cottage, built at the depot at Lazaretto Point in Maryland, that rested on the foundation piles and was surmounted by an iron lantern room. Fog bells placed on the north and south sides of the dwelling were simultaneously struck every five seconds by machinery during periods of low visibility.

John Brown was hired as the first head keeper at Thimble Shoal and served in this capacity for over a decade before being transferred to Craney Island Lighthouse. When asked to provide a character reference for Alexander J. Lee, one of his assistants at Thimble Shoal, Keeper Brown responded:

I would respectfully state in regard to the character of A. J. Lee, late Assistant Keeper of Thimble Shoal Light Station, that I do not consider him in any way fit for a lighthouse keeper. I never could trust him on watch, and have caught him asleep often, and very often intoxicated. On one occasion, in coming from the shore he was so intoxicated I had to go and pick him up in the other boat, as he was not in any way able to manage, and I thought he would drift to sea. I would respectfully state I have been in the light-house service as principal keeper for near fourteen years, and I have never had under me a man in any capacity so useless as A. J. Lee.

The ornamental lighthouse was destroyed in a fire of unknown origin on October 30, 1880, thus beginning a long and surprisingly regular succession of disasters at Thimble Shoal. Given the importance of navigating the dangerous sandbars, replacing the lighthouse took priority over other projects in the district. A new lighthouse intended for Bells Rock in Virginia had just been completed, and it was decided to place it at Thimble Shoal instead. The screwpile foundation of the former light could be reused, and divers further aided the rebuilding effort by recovering various pieces of the old structure, including the water tanks, boat davits, and portions of the lantern and lens.

On December 6, the lighthouse tender Tulip, with the necessary material and a construction crew on board, braved severe, icy storms to re-establish the light. Owing to the quick work of everyone involved, the light was re-shown on December 24, having been out of commission a mere fifty-five days. The new fourth-order lens placed in the lighthouse was formerly on display at the Lighthouse Board's offices overlooking Pennsylvania Avenue, where it had been placed near a third-floor window in March, 1873, so it could send red and blue flashes down the avenue during the second inauguration of President Ulysses S. Grant. This lens gave Thimble Shoal Lighthouse the unique characteristic of a fixed white light for sixty seconds followed by six flashes, alternately white and red, at intervals of ten seconds. A compressed-air fog siren replaced the station's twin fog bells on January 15, 1903.

The path between the parallel sandbars marked by Thimble Shoal lighthouse is difficult to navigate, especially in adverse weather conditions. This was evidenced by a series of collisions beginning in 1891, when a steamer struck the lighthouse. Just seven years later, an errant coal barge hit it too, resulting in considerable damage noted in the Lighthouse Boards report: The entire lower gallery on the southeast side was carried away and the two adjoining sides were damaged. All the joists in the southeast section were broken and thrust out of position. ...Other parts of the ironworks suffered, and the house was lifted about one half inch off the radial beams.

On December 27, 1909, the lighthouse was rammed one more time, and this disaster proved to be its undoing. The schooner Malcolm Baxter, Jr had just entered the bay from the stormy Atlantic, under tow by the tug John Twohy, Jr. Passage by Thimble Shoal was treacherous, as snow flurries and strong gales frustrated the ships efforts to maintain a straight course. While the Baxter strained against the towline, it suddenly lost its steering capacity. The Baxter communicated this information to the tug, but the tugs crew had already released the towline. With no means of control, the crew on the schooner watched helplessly as the Baxters jib boom cut through Thimble Shoal Lighthouse, causing the floor of the structure to give way. The stations stove was overturned, spilling its burning coals onto the wooden structure and igniting a calamitous fire. The keepers escaped by boat, but the superstructure and lens were destroyed and the iron substructure badly bent and damaged. This photograph, taken just four days after the destruction of the lighthouse, shows the temporary beacon placed atop the foundation.

This latest fiery disaster must have convinced the Lighthouse Board to alter the design of Thimble Shoal Lighthouse as five years later a nearly fireproof, cast-iron tower with a caisson foundation was placed at the shoal after Congress had provided $68,000 on June 25, 1910 and $39,000 on August 26, 1912 for a new lighthouse. Champion Iron Company of Kenton, Ohio fabricated the metalwork for the new lighthouse. The enormous caisson was towed to the new site, which was located only a few feet from the screwpile foundation on which a temporary light had been established. After dredging part of the shoal, the caisson was sunk into position and then filled with concrete. A rope bridge was suspended between the caisson and the screwpile foundation, so the construction workers had access to the old lighthouse's small living space during the erection of the new lighthouse.

The top of the new iron lighthouse stands fifty-five-feet above the bay, and originally housed a fourth-order lens manufactured by Barbier, Benard and Turenne of Paris, France. The lens consisted of six panels that revolved on ball bearings to produce a characteristic of fixed white for one second, and eclipse for one second. The occultations were achieved by covering alternate panels with spherical mirrors that intensified the light in the opposite panel. A five-foot-long diaphone horn was used as a fog signal, but a bronze bell cast at Baltimore in 1900 was kept on hand for emergencies. The tower possesses unusual porthole windows and is topped by a cylindrical, helical-bar lantern room, which has a diameter of seven feet and is topped by a ventilator ball along with a bronze lightning rod with a platinum tip. The three-story tower originally had a kitchen, pantry, and living room on the first floor, two bedrooms and a storeroom on the second, and a bedroom and watchroom on the third story. An enclosed stairway with four flights of stairs ran from the basement to the lantern.

In 1925, a wealthy benefactress from New York donated twelve large radio sets to afford relief from the loneliness felt by some lighthouse keepers who were all but cut off from human contact. One of these sets ended up at Thimble Shoal, and the grateful keeper sent the following words to his superior:

I respectfully wish to inform you that we have received the radio set and it is working fine. We have been able to hear very plainly a good sermon every Sunday since we received it and also lots of good music. It is the most company of anything I have ever seen in the Lighthouse Service.

Concrete cisterns in the lighthouse's caisson foundation provided a fresh supply of water for the keepers until 1964, when the light was fully automated. For the next twenty years, the lighthouse was powered by eighty-pound lead acid batteries, which were dangerous to land at the station. The electrical source was converted to solar in 1986, when four thirty-five-watt panels were installed. In 1988, the tender Red Cedar, accompanied by a 100-foot barge, brought a forty-man crew to refurbish the lighthouse. Thimble Shoal was one of seven structures scheduled for repairs that year, and owing to its exposed and wind-swept location, was the one most in need of attention. The walls, inside and out, were chipped and repainted a brownish-red.

A 1993 inspection found that part of the main concrete deck was missing, and that other parts contained small cracks. The inspectors recommended that the lighthouse be painted bright red to aid mariner discernment of the structure as a daymark. They also suggested that the glass of the lantern panes be replaced with ultraviolet-stabilized acrylic panes, in order to combat the effects of sun damage. Finally, they recommended removing the twisted remains of the old screwpile light.

On August 22, 2005 at 9:00 a.m. EDT, an online auction was opened for Thimble Shoal Lighthouse along with three other offshore lighthouses in Virginia, after no qualified non-profit group was found to take control of the lighthouses when they were offered under the National Historic Lighthouse Preservation Act in 2004. Interested bidders were required to give a $5,000 deposit to the General Services Administration and were allowed to tour the lighthouses on September 20 and 21. The invitation for bids informed interested parties that 1) the lighthouse would need to be maintained according to the Secretary of Interiors Standards for Rehabilitation, 2) the right of ingress and egress would be retained by the Coast Guard to operate, repair, replace, or relocate the aid to navigation located at the property, and 3) lead-based paint and asbestos might be present at the lighthouse. Peter Jurewicz of Smithfield, Virginia, who had always wanted to visit the lighthouse, submitted the winning bid of $65,000 on October 5 and later said he was looking forward to the adventure of restoring the structure, which will be just the latest chapter in the adventurous life of Thimble Shoal Lighthouse.

I know that theres a lot of lighthouse society historical people that dont like that these things are going to individual people, (but) I want to preserve as much as possible, too, Jurewicz said. Its not like Im going to repaint it the colors of a Coke can or advertise beer or something. It burns me up when people say that these lights are going into private hands and being lost. Theyre not being lost, theyre just being put into the hands of somebody thats going to take care of them.

For a larger map of Thimble Shoal Lighthouse, click the lighthouse in the above map.

This lighthouse is best viewed from a boat, but can be seen in the distance from Fort Monroe.

A fourth-order Fresnel lens used in Thimble Shoal Lighthouse is on display as part of the collection of Fresnel lenses at the U.S. Coast Guard Training Center in Yorktown, Virginia.