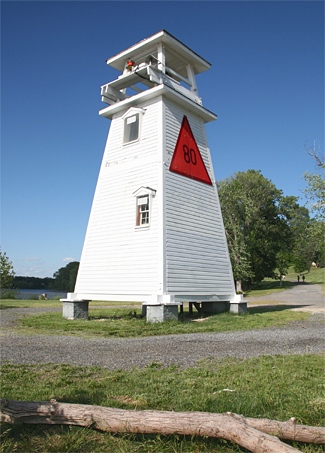 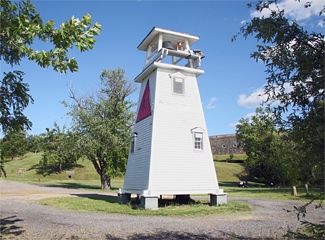 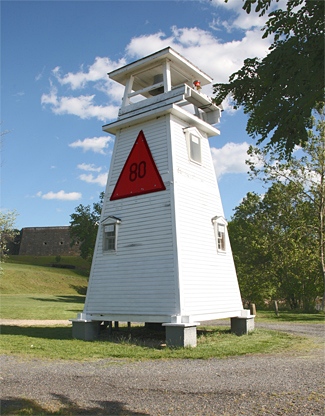 The history of Fort Washington is intricately tied to its namesake, the man affectionately referred to as the father of our country. Shortly after the founding of the nations capital, George Washington suggested that a defensive fortification be established downstream on the Potomac. The first fort on the site was not named after Washington but was rather called Fort Warburton, after Warburton Manor, the estate of Washingtons friend and neighbor William Digges. General Washington was a frequent dinner guest at the Manor, and a very ceremonial method was established for retrieving the General. Warburton was situated directly across the Potomac from Mount Vernon, and when Washington was ready for supper, he would stand upon a mound by the water and wave a flag. Seeing this, Digges would dispatch a barge, rowed by six Negroes outfitted with uniforms of check shirts and black velvet caps. This rather pretentious manner of transport was evidently not uncommon amongst the wealthy planters of the time.

In 1798, Washington called again for the erection of a fort near Warburton Manor, noting that, Should proper works be erected here it would not be in the power of all the navies of Europe to pass this place. After Britain and France threatened hostilities against the fledgling America, four acres were promptly purchased from the Digges family. Work on Fort Warburton began in the spring of 1808 and was completed by the end of the following year.

The fort received its first test during the War of 1812 and failed to live up to Washingtons prophecy. In August 1814, British ships sailed up the Potomac for Alexandria, Virginia, shortly after the English army had taken control of the American capital. The warships shelled the fort from their anchor point near Mount Vernon itself. While this was happening, the garrisons commander Captain Samuel T. Dyson ordered his men to retreat and blow up the fort by detonating the ammunition and explosives in the storehouse. This was evidently not the correct strategy, as the Captain was later court-martialed for abandoning his post and destroying government property.

After the war, Pierre LEnfant, the capitals architect, and Colonel Walker K. Armistead were employed to construct a new fort, which was finally finished in 1824. It wasnt until 1856, however, that the first communication occurred about establishing a lighthouse at this important point located near the junction of Piscataway Creek, Swan Creek, and the Potomac River. The man who authorized the lighthouse was none other than Secretary of War Jefferson Davis, soon to be president of the Confederacy. As the lighthouse would be on military grounds, Davis imposed the following conditions: the light shall be placed upon the wharf and not within any of the fortifications, and ... the light keeper shall be subordinate to the military command of the post and public ground in all that relates to police and discipline. In addition, it was noted that it would be convenient if the Ordnance Sergeant, who was already in charge of other public property, could care for the light.

The initial light at the fort had to be built for only $500, so it consisted of merely an eighteen-and-a-half-foot cast-iron tower topped with a feeble illuminating apparatus. This column, installed on November 7, 1857, was considered merely a temporary stopgap to supply river going vessels with at least some form of navigational aid. Ordnance Sergeant Joseph Cameron was the first steward of the beacon and served until 1869.

Protestations regarding the inadequacy of the light were soon made, and in 1870 corrective action was taken. In that year, the Lighthouse Board reported that the framework of a beacon-light to replace the temporary post and lantern at Fort Washington had been constructed at the Lazaretto lighthouse depot. The steamship tender Tulip transported the sixteen-foot tower to the Potomac fortress in February 1870. This new structure was actually shorter than its predecessor, but it was more effective due to its position near the end of the wharf. A small addition was made to the light tower in 1874 so the keeper would have a place to spend the night when stormy weather forced him to remain at the light.

In 1870, Sergeant Edward Kelly, the second keeper of the light, requested a raise, prompting the Local Superintendent of Lights to send the following to the Lighthouse Board:

I most respectfully recommend that your Hon. body raise the pay of the Light House Keeper at Fort Washington, Md, from one hundred & eighty dollars ($180) per annum to three hundred ($300) per An. I doubt whether there is a light station on the Potomac river that requires more labor & attention to keep clean & in order than the Light at Fort Washington, and as this light is a very important one, I most earnestly recommend that a salary sufficient to secure an efficient Keeper be allowed

Keeper Kelly got his raise, and two years later, he solicited an increase to $480 because he had to visit the light multiple times each night from his house, located over a quarter-of-a-mile away. Kelly threatened to resign if he didnt get the raise, and it appears that was the case, as he left the station in 1872. A thirty-two-foot-tall fog bell tower was added to the station in 1882, and the next year, after over two decades of requests, the Lighthouse Board reported that Secretary of War Robert Lincoln had given permission for a small wooden structure suitable for a keepers dwelling to be built near the tower. This house was completed in January 1885, and was later upgraded with the addition of a brick water cistern and a new picket fence. In the ensuing years before the turn of the century, little of note occurred at the station except that a number of boathouses and sheds were constructed along the wharf. These proved troublesome to the lights visibility atop its sixteen-foot tower. In 1900, the Board remarked that the tower should be built about 6 or 8 feet higher than the present one, that the light may show above a structure which has recently been erected at the military post... The Board also complained of deficiencies in the size of the lantern and its ventilation, and requested $1,600 for a third light tower.

This amount was never granted, so in 1901 the Board decided to modify the fog bell tower to accommodate a light. It reported that four new caps were put on the sills of the fog bell tower...and a platform was built on them to support a lens lantern. The old light tower was soon demolished, and although placing the light atop the fog bell tower was intended as a temporary measure, it is still home to Fort Washington Light today. The lower portion of the bell tower was floored and enclosed in 1904, allowing supplies for the light to be stored inside.

The forts strategic significance had come to an end after the Civil War, and it was abandoned in 1872. However, when war with England again seemed a possibility, a trio of Rodman smooth-bore guns, supported by ninety soldiers of the Fourth Artillery Battery, was placed in position overlooking the river in 1896. The men also had at their disposal an electrically controlled minefield. The fort later served as home to the Third Battalion Twelfth Infantry following World War I.

Keeper Daniel McCahan was reprimanded in 1890 for failing to salute the lighthouse tender Jessamine on July 7 and 8 and for being out of uniform on those dates. Six years later, Keeper McCahan was found physically incapacitated for the performance of his duties and was replaced by Samuel Jones.

The light was electrified on February 1, 1920, and the following year, an electric bell striker was installed in the tower, changing the fog bells characteristic to a single blow every fifteen seconds. Keeper Gary E. Powell was transferred from Fort Washington Lighthouse to Cedar Point Lighthouse in 1925, and responsibility for the light at Fort Washington was assumed by the War Department.

In 1939, the fortress grounds were slated to be used as the terminal point for a proposed bridge across the Potomac, but World War II interrupted the plans, and the fort eventually fell under the purview of the National Park Service. While the fort was changing hands, the lighthouse remained an active aid to navigation controlled by the Coast Guard. In 1948, the station consisted of the fog bell tower with a light, a seven-room keepers house, a wooden dock, and a boathouse, and the stations sole keeper was tasked with maintaining twenty-one other lights and five lighted buoys up and down the Potomac River. This was a forty-mile round trip, and certainly a tall order, despite automation.

The wooden, dual light/fog bell tower is now all that remains of the station. While Fort Washington is a public museum-piece, the lighthouse itself is closed to public inspection. After 9/11, the area immediately around the lighthouse was fenced off and became home to sophisticated military defense equipment. Signs on the fence carried a notice forbidding photography of the area, though several pictures taken during this time period can be found on the internet. The dark-colored equipment has now been removed from the area, and lighthouse visitors are free again to attempt to capture the humble lighthouse in a flattering light.

The tower was turned over to the National Park Service in 2005, and a major restoration of the structure was carried out in 2009 by the services Historic Preservation Training Center. Ongoing maintenance of the tower is performed by the Chesapeake Chapter of the U.S. Lighthouse Society. The Coast Guard removed the light and the "80" daymark from the tower in 2020. The lights along the Potomac River were numbered, and Fort Washington Lighthouse was the eightieth light in this chain of lights. This led to the lighthouse being known as Light 80.

Located on the wharf in Fort Washington on the upper Potomac, across the river from Mount Vernon.
Latitude: 38.71229, Longitude: -77.0369

For a larger map of Fort Washington Lighthouse, click the lighthouse in the above map.

From the Capital Beltway (Interstate 95/495) just east of the Woodrow Wilson Bridge, take exit 3A and follow the Indian Head Highway ( Route 210) south for 4.3 mile to Fort Washington Road. Turn right on Fort Washington Road and travel 3.4 miles to the entrance to Fort Washington. To get to the lighthouse, turn right on the second road from the main park loop (L'Enfant). This road will wind down below the fort to a parking area, from which you need to walk the rest of the way down to the river bank to see the lighthouse.

The sixth-order drum lens formerly used in the lighthouse can be seen at the Museum of Chincoteague Island in Chincoteague, Virginia.