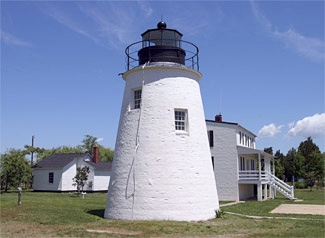 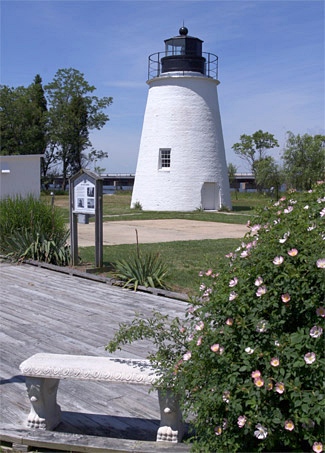 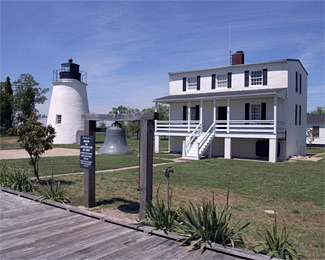 The scenic environment of Piney Point was the summer getaway of many Washington D.C. notables for much of the nineteenth century. Named after the long leaf yellow and loblolly pines lining the shores of the Potomac River, Piney Point provided a nature retreat to Presidents James Monroe, Franklin Pierce, and Teddy Roosevelt. A number of other capital luminaries such as Henry Clay, John C. Calhoun, and Daniel Webster were frequent visitors to Piney Point Hotel, which unfortunately closed after a devastating hurricane in 1933.

Located fourteen miles up the Potomac River from the Chesapeake Bay, Piney Point Lighthouse is situated on the Maryland shore of the river. A lightship had been stationed in the area since 1821 to mark hazardous shoals at Piney Point and at Ragged Point on the opposite shore. In 1835, Congress set aside $5,000 for construction of a land-based beacon to replace the lightship, and the contract was awarded to the prolific lighthouse builder John Donahoo. Piney Point Lighthouse was the tenth of twelve he would complete in his lifetime. The tower was the first of eleven lighthouses to be built along the river, and it is one of only three historic lighthouses that remain standing today (the other two being Jones Point and Fort Washington).

In December 1835, Henry and Charlotte Suter sold 2.57 acres on Piney Point for $300 so the lighthouse could be built. Henry was reluctant to sell the parcel but agreed to do so if he could be appointed keeper of the light. Henry passed away before the lighthouse was finished, but his wife did serve for seven months as the lights third keeper before being dismissed for drinking too much.

First lit in September 1836, Piney Point Lighthouse is much like most of Donahoos other towers  a thick and blocky structure in the form of a truncated cone. Donahoos works were cheap and sturdy, allowing him to make low bids that were to the liking of the frugal Fifth Auditor of the Treasury, Stephen Pleasanton. Since Pleasanton held great sway over lighthouse construction for three decades, John Donahoos building style was repeatedly endorsed.

Twenty-six-foot-tall Piney Point originally employed ten lamps, set in spherical reflectors, to produce a fixed white light. In addition to the tower, Donahoo built a three-room, one-story keepers dwelling topped by an A-line roof. The small twenty by thirty-foot house contained a dining room, parlor, fireplace, and cellar, and had an attached ten by twelve-foot kitchen. In 1884, a second story was added to the structure, greatly improving the keepers comfort level.

Due to complaints regarding the inadequacy of the light exhibited from Piney Point, I.W.P. Lewis visited the lighthouse in 1837, and later provided the following account of what he found. I arrived at the light-house about 9 oclock in the evening; and, on reaching the lantern, found five out of ten lamps extinguished, and the remaining five nearly so, for want of trimming. All the reflectors were laid in a heap on the floor, which was covered with oil. The keeper intrusted his duties to a negro wench.

On June 5, 1855, the old lighting apparatus of ten oil lamps and fifteen-inch reflectors was replaced by a more efficient fifth-order Fresnel lens, increasing the lighthouses visibility from ten to eleven miles. In March 1880, a thirty-foot, wooden fog bell tower, built in the Victorian style, was added to the station to aid mariners in low-visibility conditions. Painted white, this tower stood fifteen feet west of the lighthouse and possessed a mechanical striker that tolled the bell every twenty seconds during thick and foggy weather. A long reed horn replaced the bell in 1936. The old bell tower was torn down after being heavily damaged by Hurricane Hazel in 1954.

A Maryland Historical Trust report gives an excellent account of the lighthouses original dimensions and the current condition in which we find it over 150 years later. The tower has a thirteen-foot diameter at the base, where its walls are four-feet thick, and tapers to a seven-foot diameter at the top, where the walls are only eighteen inches thick. The door to the structure is just five feet high, and is set in a threshold that is a single piece of stone. The floor of the tower is made of brick treads, and a spiral wooden staircase winds around a central support column. The outermost portions of the stair treads are set in the masonry walls, and the stairwell leads to a masonry vault that sustains the lantern deck above. Three windows are set at different levels within the tower to light its interior.

The nine-sided lantern, currently painted black, is accessed via an iron ships ladder that ascends through the lantern deck. The panes in the lantern room are rectangular in shape, and a metal roof with a large ventilator ball caps off the structure. The lanterns floor is made of radially laid stone wedges, and the outer parapet wall is composed of masonry. An exterior brick deck encircles the lantern room, and can be reached by walking through an iron half-door. While the fifth-order Fresnel lens has been removed, the original light pedestal is still intact.

In a modern-day interview, Marion Humphreys, son of Piney Point Lighthouse keeper Loch Humphreys, gave a compelling account of the work ethic a light steward had to maintain. Humphreys father was assigned to the station in 1911, and young Marion was often called upon to help with various tasks. He relates how he knew every part of the machinery that operated [the] light and the fog signal...as good as my dad. He claims that his father was a stickler for proper procedures, and that it was beat into your head that what you were doing was for the protection of the lives of people. Later in the article, we learn that this attitude emanated from the top down. Humphreys recalls how a retired naval officer and lighthouse inspector would put on a pair of white gloves and run a finger along the top of the door, looking for dust. Apparently this inspectors high standards were well satisfied, as he once told the elder Loch Humphreys: Your place looks like a man o war.

While William Yeatman, Jr. was serving as keeper of Piney Point in the 1920s, he was commended on at least two occasions for rendering assistance outside his normal duties. On August 2, 1921, he anchored a power canoe after it had broken loose from its anchor and sank near the station, and on February 2, 1926, he helped a man who stopped at the station after injuring his knee cap very badly. Keeper Yeatmans father served as keeper of Point Lookout Lighthouse for nearly forty years, and in 1931, William Yeatman, Jr. took a demotion to become assistant keeper at Point Lookout, where he had spent his childhood.

The keepers job was ultimately eliminated with the onset of automation, and Piney Point Light Station was decommissioned completely in 1964. For many years the Coast Guard kept the property as housing for its personnel, but in 1980 it deeded the grounds to St. Marys County. The lighthouse and other buildings were given to the Department of Recreation and Parks, and this organization allowed the St. Clements Island-Potomac River Museum to take over operation of the site. Though the light is no longer an aid to navigation, the museum sometimes activates the light at night.

The museum undertook a restoration program aimed at repairing and improving the tower and grounds, using, in part, an $11,000 donation from the nearby Steuart Petroleum Company. This money was used for external lighting of the grounds, landscaping, benches and picnic tables, and brick repairs for the keepers house. The restrooms at this public park were also made wheelchair accessible with the Petroleum grant. Other improvements to the property include a boardwalk that traverses a path from the keepers house to a Potomac River pier amid a sand beach and pine trees. Flower beds and walkways extend throughout the grounds, and an interested visitor can read from plaques that relate the historical lore of the lighthouse. After the interior wooden spiral staircase was repaired and deteriorated pieces replaced, the lighthouse opened to the public in May 2002.

The St. Clements group established Piney Point Lighthouse Museum in a Coast Guard cottage near the lighthouse, but this structure was unfortunately flooded by Hurricane Isabel in 2003. The museum is now located on higher ground in a two-story building just up the road from the lighthouse, and the Coast Guard building has been demolished. The museum contains exhibits about the lighthouse, the Coast Guard, the history of the area as a presidential retreat, and the interesting tale of a Black Panther German submarine, so named on account of its synthetic rubber skin designed to help it evade Allied sonar. At the end of World War II, the submarine was sailed to the United States where its novel skin was analyzed. The U-boat was later used as a target for new explosives testing, before being intentionally sunk off Piney Point. The submarine is still largely intact and is now a historical shipwreck dive preserve. Besides the U-boat connection to World War II, Piney Point also served as a torpedo testing range during the conflict.

On February 20, 2021, Dan spinella, owner of Artworks Florida, installed a replica of the fifth-order Fresnel lens used at Piney Point in a small lantern room at the Piney Point Lighthouse Museum. Friends of St. Clements Island & Piney Point Museums spent years raising the funds needed to purchase the lens, which costs around $30,000 to produce. The lens is the focal point of new displays developed for the museum.

Appropriately, Piney Point Lighthouse Museum can also be reached by boat. Seafaring vessels can dock at a river pier and proceed directly along the boardwalk to the lighthouse and other attractions.

Located at Piney Point on the northeast side of the Potomac River, about 13 miles northwest from Point Lookout at the entrance to the river.
Latitude: 38.135332, Longitude: -76.529717

For a larger map of Piney Point Lighthouse, click the lighthouse in the above map.

From the Capital Beltway (Interstate 495-95) in Washington D.C., take Exit 7a and go south on Route 5 (Branch Ave.) Continue south on 5 for roughly 53 miles until you reach Route 249 (Piney Point Road) in Callaway. Turn right onto Route 249 and go 7.4 miles to Lighthouse Road. Turn right and follow Lighthouse Road (Route 498) for 1.4 miles to its end at the parking area for the lighthouse.

The lighthouse grounds are open daily during daylight hours. The nearby Piney Point Lighthouse, Museum and Historic Park is open daily 10 a.m. to 5 p.m. (except Thanksgiving Day, Christmas Eve, and Christmas Day), during which time tours of the lighthouse and exhibits are given. Call (301) 994-1471 for more information and to confirm hours.

The lighthouse is owned by the National Park Service and managed by St. Mary's County. Grounds open, dwelling closed, tower open in season.