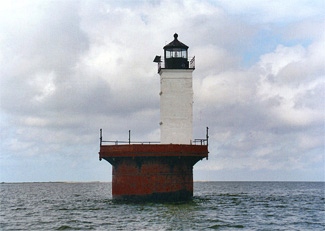 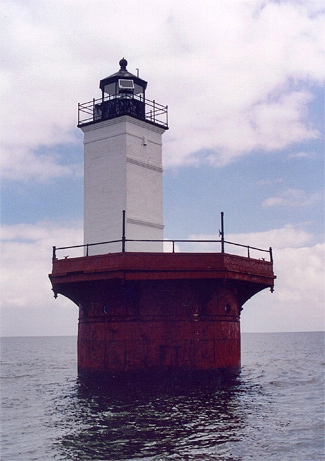 The first lighthouse to mark Kedges Strait, which runs between Smith Island to the south and South Marsh Island to the north and links Chesapeake Bay to Tangier Sound, was built on Fog Point, the northwest tip of Smith Island. Land for the lighthouse was purchased from Richard and Euphemia Evans, who being illiterate signed the deed granting a few acres on the point in exchange for $200 with a large X. Fog Point Lighthouse was built by John Donahoo at a cost of $3,500 and began operation in 1827, exhibiting a light from ten lamps set in sixteen-inch reflectors. In 1855, the beacon was improved through the installation of a fifth-order Fresnel lens.

In its annual report of 1872, the Lighthouse Board described the need for a new light to mark Kedges Strait:

Solomon's Lump is a point of land on the north end of Evans Island. There is a shoal that extends out a considerable distance from this point in a northerly direction, and is a source of danger to vessels navigating Kedges Strait at night. Near its extreme point is the regular channel. The shoal itself has not more than about 5 feet of water in it to a point near the red buoy, which marks its extreme northerly end. At night this buoy cannot be seen a sufficient distance to be of any use. The only light in this vicinity is that on Fog Point, about one and one-fourth miles in a west, southeast direction, but, on account of its distance and location, it affords no security to vessels from going ashore on the reef off Solomon's Lump. The light at Fog Point was established in 1827, before the introduction of the screw-pile system of light-houses, and though it has served to mark the entrance to Kedges Strait for a long time, it is of little value as compared with other positions that could have been selected for a screw-pile structure, which would not only have marked the entrance to the strait, but would have been a guide all the way through. A light established on the shoal off Solomon's Lump, near its extreme point, and in 5 feet water, or on the shoal on the opposite side of the channel would accomplish both these objects, and render navigation through Kedges Strait safe at all times.

The Board urged the establishment of a light anchored on the treacherous shoal and estimated that $15,000 would cover its construction. Once the new screwpile lighthouse was established, Fog Point Lighthouse could be discontinued, thus saving the maintenance and staffing cost of another light.

The Lighthouse Board repeated its request for $15,000 in 1873, and the following year Congress appropriated this amount for the lighthouse. Five acres of submerged land were ceded to the federal government, and work on the lighthouse began on June 21, 1875. The screwpile lighthouse consisted of a square keepers dwelling resting atop five wrought-iron piles and surmounted by a lantern room. Keeper Ephraim Tyler, who had been in charge of Fog Point Lighthouse for many years, transferred to the new lighthouse and exhibited its light for the first time on September 10, 1875.

In 1892, Solomons Lump Lighthouse was described as a white keepers quarters with a brown roof and a black lantern that exhibited a fixed white light. The light was augmented by a 1,200-pound fog bell, which was alternately struck a double and single blow every thirty seconds. After its weights were wound up, a Gamewell striking apparatus could strike the bell for twelve hours.

The screwpile lighthouse lasted eighteen years before it was put out of commission by moving masses of ice in January 1893. The Lighthouse Board published the following information on the lighthouses mishap: Though not carried from its site, the house was pushed over so that part of it is submerged. All the movable property was taken away and stored. In June a lens lantern light was established on the wreck to mark its position at night and afford assistance to local navigation.

Congress quickly appropriated $30,000 on March 3, 1893 for a replacement screwpile lighthouse, but after mature consideration the Board decided that a sturdy caisson foundation was needed at the site and suggested to Congress that the money saved from the advantageous contract from the building of Wolf Trap should be applied to make up the cost differential between a screwpile and a caisson foundation at Solomons Lump. Congress authorized the change in plans in December 1893, and the following year separate contracts were awarded for providing the necessary metalwork and for erecting the lighthouse at the site. There was a distinct urgency about completing the new lighthouse, for while it was being planned, the old screwpile wreck was dislodged by ice and carried away, leaving nothing on which a temporary light could be mounted.

The caisson was assembled at the Lazaretto lighthouse depot near Baltimore and then towed to Solomons Lump in May 1895 along with three lighters loaded with construction material and the working plant. Solomons Lump Lighthouse is one of only eleven light structures in the United States whose foundation caisson was sunk by the pneumatic process. Water was pumped out of a air-tight chamber in the lower reaches of the caisson so workers could enter and move dirt and sand away from the caissons cutting edge. At the same time, this edge was pushed farther down into the shoal by the addition of concrete and stone in the cast-iron cylinder. The caisson was anchored in place on May 20th and by May 31st had reached the predetermined depth, though it was somewhat out of level. Efforts to level the caisson resulted in it sinking another two-and-a-half feet into the shoal, requiring an extra course of cylinder plates to be added to the foundation so the light would retain its intended height above the water level.

The foundation, which has a diameter of twenty-five feet, was filled with concrete to a point about six feet above the high-water line, and on top of this, two 2,000-gallon water cisterns and the cellar were constructed. The interior walls of the cellar were lined with bricks, which were used to support the weight of the tower above.

The cylindrical foundation is thirty-seven feet tall but only half of its length is visible above high tide. The upper course of cylinder plates do not flare out into a broader trumpet shape like in many other lighthouse of similar design, but rather sport ornamental cast-iron brackets that hold a cantilevered gallery deck. A twenty-five-foot-tall, octagonal keepers dwelling was built around a square brick tower, which formed two of the lighthouses eight sides. The first floor of the keepers quarters contained the living room, kitchen, pantry and a door that led into the square lantern tower and its wooden staircase. On the second floor were two bedrooms for the keeper and his assistant.

The tower is topped by an octagonal lantern room, surrounded by a railed gallery. The first light to be shown from the new lighthouse was fixed white, and issued from a fifth-order Fresnel lens, but the station received a fourth-order lens in 1919, when a lens swap was made with Virginias Cherrystone Lighthouse. Today, the light characteristic is a white flash every six seconds, complimented by two red sectors to warn mariners of nearby shoals. With a focal plane of forty-seven feet, the white light has a range of eight miles and the red light a range of six miles.

Before the installation of radio and telephone technology in the 1920s, there was no way for the keepers to communicate with the mainland. This was of great concern to the keepers families, who must have worried that the distant lighthouse could be wrenched by the ice or struck by an errant ship. The keepers were forced to make an eight-mile journey in a small skiff for shore leave, but the opportunity to visit family was seldom delayed except in extreme weather. During the service of keeper Henry Columbus Sterling, who oversaw the lighthouse from 1904 to 1937, keepers worked for one week and had shore leave for one week. This meant that Sterling had to take four trips to and from the shore a month, which he made in a tiny sailboat.

In 1936, shortly before Sterling retired at age sixty-five, there was a great freeze and Janes Island Lighthouse was swept away by ice. Sterlings son, concerned for his fathers safety, climbed atop the Ice Plant in Crisfield in a desperate attempt to determine if his fathers lighthouse was still standing. Although the light still shone, Sterling had in fact abandoned the station and walked across the heavy ice to the safety of Smith Island, much like his predecessors had done in 1893, when the first Solomons Lump Lighthouse was lost. Sterling was unwilling to abandon the lighthouse without authorization but finally left the station after a plane dropped a note from his superior.

After Solomons Lump Lighthouse had been dark for three days in February 1938, Captain Lacey Tyles and Marvin Marshall of the State Conservation patrol went out to investigate and found forty-tow-year-old Assistant Keeper Rolly Laird stricken with rheumatism and unable to reach food in the pantry. Laird was taken to his home on Smith Island, where his condition slowly improved.

Solomons Lump was converted to unmanned status in April 1950, after which time the stations condition worsened. Sometime around 1971, the dwelling portion of the lighthouse was demolished, leaving the brick tower standing off-center on the northwest side of the caisson. The tower has thirteen-inch- thick walls at its base, though these taper to four inches in thickness at the top. The white tower once had windows to shed light on its interior stairway, but these have been bricked in. As recent as 2014, the official Coast Guard Light List described Solomons Lump Lighthouse as a white octagonal dwelling with square tower, even though the dwelling has been absent for over forty years.

In 1988, the U.S. Coast Guard Cutter Chokecherry docked at the station and made some general repairs. A sealant and paint coating were spread over the brick masonry, and workers scraped and then painted the upper portion of the caisson. This was a downgrade from the recommended maintenance, which called for a thorough sandblasting of the whole caisson visible above the water. The Coast Guard crew also removed some aged and yellowed acrylic panes from the lantern and replaced them with glass, which allowed greater visibility of the light. Cracks in the lower deck were filled in and the entire surface was covered with sturdy roofing materials designed to resist the elements.

The 1996 National Register of Historic Places Nomination form for Solomons Lump Lighthouse concluded that the lighthouse was not eligible for listing as the stations integrity was compromised when the integral keeper's quarters was demolished. This functional but peculiar looking lighthouse thus faces an uncertain future.

For a larger map of Solomons Lump Lighthouse, click the lighthouse in the above map.