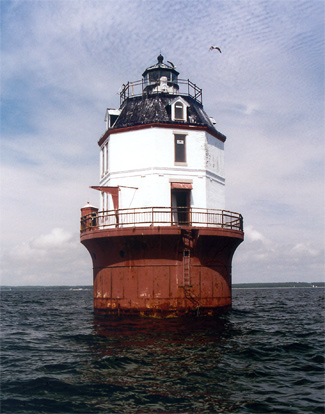 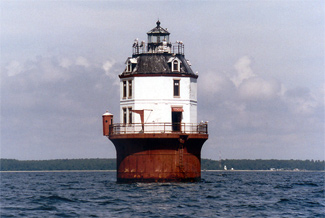 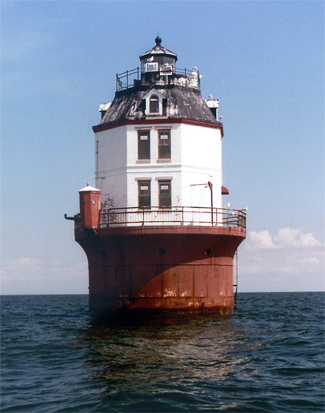 Point No Point lighthouse stands two miles removed from the western shore of Chesapeake Bay, and six miles north of Point Lookout and the entrance to the Potomac River. In 1891, the Lighthouse Board requested $35,000 for the lighthouse, reasoning, There is a stretch of about 30 miles between Cove Point and Smith Point lights which should be better lighted. For a part of the distance navigators are without a guide, where a deviation from their sailing course might carry vessels of heavy draught onto dangerous shoals. There are many of this class of craft now trading to Baltimore, and their number is increasing. A light-house on the shoal of Point No Point would be useful warning, and a suitable structure can probably be erected there for $35,000.

The Board repeated its request the following two years, and then in 1894, their proposed design for the lighthouse changed, causing the estimated cost to double. In view of recent damages by ice to screwpile structures in Chesapeake Bay, the Board is now of opinion that only caisson structures should be used where such dangers exist. The new price tag for a caisson lighthouse was estimated to be not in excess of $70,000, and on March 3, 1901 Congress appropriated $65,000 for the structure.

Later in 1901, initial borings were taken at the proposed site, and the architectural plans were completed. The contract for erecting the lighthouse was awarded to Toomey Brothers for a price tag of $38,880, and a $9,475 contract was made for the necessary metalwork. In 1902, the Board reported that, seven sections, or courses of the foundation cylinder were completed, and three sections had been delivered to the Lazaretto lighthouse depot near Baltimore.

The square, wooden bottom section of the caisson was launched in November 1902, and atop this were mounted three courses of the iron cylinder. Shortly after the caisson was towed from Solomons, Maryland to the site in April 1903, disaster struck. A temporary construction pier built by the contractors during the previous season collapsed, and the caisson, which was secured to the pier, overturned. After breaking off the second and third courses of cylinder plates, the caisson drifted down the bay before a northwest gale. The Toomey Brothers tugboat trailed after the wayward caisson and picked it up the next day off Rappahannock River, forty miles south of the construction site. The caisson was towed to Solomons, Maryland where two new courses of plates were added to replace those lost. Finally, on October 21, 1903, the caisson, with a draft of nineteen feet, four inches, was successfully towed back to its intended location, grounded the following day, and then secured with 225 tons of riprap on the 23rd.

A new construction pier and workers quarters were built adjacent to the caisson, and the crew had filled the cylinder with concrete to within three feet of the top of its fifth course when the unthinkable happened: the second construction pier was lost. This time it was pressure from heavy ice floes that in February 1904 dislodged the pier and swept away it and the air compressor, the boiler, a section of the air shaft, four cylinder plates, the workmens quarters, some cement, broken stone, sand, and small tools.

Unlike the first contractors at Baltimore Lighthouse (another caisson structure plagued by mishaps), Toomey Brothers fulfilled their obligation to finish the beacon. Soon they had commenced building a third pier, and the work of filling the iron cylinder with concrete resumed. A third order for cylinder plates was also made to replace those lost in the recent mishap. During June 1904, the caisson was sunk to a depth of thirteen feet using the pneumatic process, wherein workers in a chamber and airshaft embedded in the foundation dug away sand and debris from the caissons cutting edge, allowing it to settle into the shoal.

After completion of the work in February 1904, the Lighthouse Board gave the following description of the lighthouse:

The lower part consists of a wooden caisson, 32 feet square and 13 feet high, which was provided with a working chamber and air shaft for carrying on the operation of sinking the structure by the pneumatic process. These spaces were subsequently filled with concrete. On the roof of the caisson rests a cast-iron foundation cylinder, 30 feet in diameter and 51 feet in height, expanding near the top, which is 18 feet above the water, into a trumpet shape. This cylinder is mainly filled with concrete, spaces being left for cellar and two cisterns. Surmounting the foundation cylinder is an octagonal brick dwelling, 2 stories high, with a mansard roof, supporting a lantern deck with railing and an 8-sided lantern. A gallery surrounds the house, accessible from the water by means of two sets of ladders, and on it are placed steel davits, boat-hoisting apparatus, and the like. The new light was shown for the first time on April 24, 1905. It is of the fourth order, illuminating the entire horizon, and flashing white and red, alternately, at intervals of 20 seconds. A bell is struck by machinery a double blow every 15 seconds during thick or foggy weather.

The first floor of the lighthouse contained the kitchen and living space, while the upper level housed bedrooms for the head keeper and his assistant. Delineating the top of the first and second levels are respectively two and four courses of decorative corbeled brick. The watchroom is located within the mansard roof, which is interrupted by four gabled dormer windows. A hexagonal iron privy with a pyramidal roof is cantilevered over the edge of the lower balcony.

On September 26, 1914, Assistant Keeper William Yeatman went ashore for mail with his little daughter and was returning to Point No Point Lighthouse when they were washed overboard while trying to land at the station in a gale. Keeper George Willis quickly threw a line to Yeatman and managed to help save both him and his daughter from drowning. Keeper Yeatman was soon promoted to keeper of the station and would later serve at Drum Point, Piney Point, and Point Lookout.

In 1938, Point No Point Lighthouse became fully automated, though this did not mean that it was soon bereft of keepers. A crew of coastguardsmen remained at the lighthouse until 1962, when it was finally converted to unmanned operation. Only three manned lighthouses remained on the Chesapeake after 1962: Lower Craighill Channel Front Light, Sandy Point Lighthouse, and Thomas Point Shoal Lighthouse.

Lacking live-in maintenance workers, the station soon fell into disrepair. In 1988 and 1989, the Coast Guard refurbished the roof, lantern room, gallery railing and access ladders, and the caisson was sandblasted and given a new coat of paint. While the Coast Guard continued its efforts in the early 1990s, the Maryland Historical Trust reported that the interior of the structure was deteriorating. The floor in the first level had been covered with cement, but that on the second level was found to have rotted from excessive water damage.

In April 2001 the Coast Guard cutter Kennebec transported a load of pressure-treated wood and copper roofing to the station, as part of an effort to stem the tide of moisture damage. A Coast Guard maintenance team from Baltimore replaced rotten structural floor beams and cut and installed new planking for the floor. To prevent further water intrusion, the workers also replaced the flat portion of the towers metal roof, which had been punctured in several places and was separating at its seams.

Point No Point Lighthouse is still an active aid to navigation, though the light these days is a flash every six seconds issuing from an acrylic lens (which sits on the original lantern pedestal). The cost burden of continuing maintenance has led the federal government to move to divest itself of the structure, and a proclamation on May 11, 2006 made it available to non-profits, government agencies and other groups. After no agency or non-profit stepped forward to take responsibility for the lighthouse, the Office of Real Property Disposal of the General Services Administration held an online auction for the structure. Bidding began on September 26, 2007, but about a month later, the auction was suspended when it was realized that the lighthouse serves as a boundary marker for the Navys Aerial Firing Range and target area. The highest bid at the time of the suspension was $135,000. After being in limbo for a couple of months, the auction was officially canceled on February 8, 2008.

Located on the western side of the Chesapeake Bay, 6.3 miles north of Point Lookout and the northern side of the entrance to the Potomac River.
Latitude: 38.128125, Longitude: -76.29027

For a larger map of Point No Point Lighthouse, click the lighthouse in the above map.

This light is best viewed from the water. Sawyer Charters offers Chesapeake Bay Lighthouse Tours that pass by Point No Point Lighthouse.

Find the closest hotels to Point No Point Lighthouse