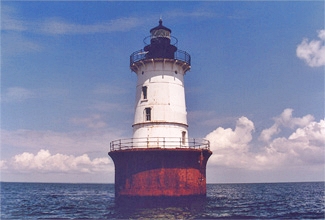 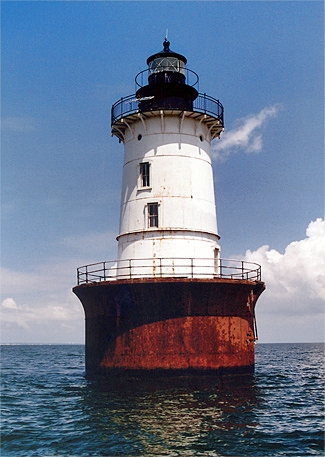 Hooper Island is actually a chain of three islands, called Upper Hooper Island, Middle Hooper Island, and Lower Hooper Island, that runs parallel to the mainland for roughly ten miles along the eastern shore of the Chesapeake Bay. The islands were named after Henry Hooper, an earlier owner of much of what is now known as Upper Hooper Island. Sometime before 1855, a lightship was anchored west of the islands to warn mariners of shoals that extended for some distance into the bay. Lighthouse Board reports indicate that this vessel was thoroughly repaired and refitted in 1856, but it met a sad fate during the Civil War when it was either removed and sunk or destroyed by the insurgents. A replacement ship was placed back on duty in 1866, and the following year Hooper Strait Lighthouse was built off the southern end of the islands to mark the passage between Chesapeake Bay and Tangier Sound. In 1897, the Lighthouse Board, borrowing language it had used in its requests for Point No Point Lighthouse, petitioned congress for a permanent lighthouse to serve the area where the lightship had been anchored. There is a stretch of about thirty miles between Cove Point and Smith Point lights which should be better lighted, noted the Board. For a part of the distance navigators are without a guide, where a deviation from the sailing course might carry vessels of heavy draft onto dangerous shoalsThe shore on the west side of the bay hereabouts is bluff and can be more easily seen at night than that on the eastern side, which is low. The shoals to be dreaded lie along the latter, and a light placed near that vicinity would be a great aid to navigation. The Board concluded their recommendation by estimating that a light could be established near Hooper Island for $60,000.

Congress provided the necessary funds for Hooper Island Lighthouse in two $30,000 allotments made in 1898 and 1899. A $18,955 contract was awarded to Variety Iron Works of Cleveland for providing the metalwork, while Toomey Brothers of Connecticut was to be paid $29,000 for erecting the lighthouse. The Cleveland foundry was late delivering its work, forcing the cancellation of the contract with Toomey Brothers. The construction contract was thus re-advertised in June 1900, and once again Toomey Brothers provided the lowest bid. This time their bid was $31,300, over $2,000 more than their earlier one.

Hooper Island Lighthouse is one of only eleven in the U.S. that rests atop a caisson foundation sunk using the pneumatic process. In this procedure, a cast-iron cylinder is mounted atop a wooden caisson containing an airtight compartment. After this arrangement has been towed to the construction site, water is pumped out of the chamber. Construction workers then shovel or otherwise remove sand and sludge away from the edges of the caisson, and the heavy concrete and stone inside the cylinder causes the entire structure to sink into the bottom of the bay. The pneumatic process is far from simple. In the case of the construction of Point No Point Lighthouses, the caisson overturned and was pushed down the bay by a gale, but, fortunately, work went far more smoothly at Hooper Island.

In May 1901, the wooden caisson, connected to two tiers of cast-iron plating that were filled with twelve inches of concrete, was launched. A temporary pier and work platform were completed at the construction site on June 23, 1901. By the end of June, the fifth layer of plates had been added to the cylindrical foundation, and the entire structure was towed to the construction pier on July 6, 1901. After thirty feet of concrete were placed in the cylinder, the caisson sunk under its own weight to a depth of nearly six feet. The airlock was then placed in position and connected to the compressor, allowing workers to excavate the shoal from beneath the caisson. On August 31, the foundation reached the desired depth of thirteen-and-a-half feet. The top tier of the foundation, which flares out like a trumpet, was then added, and the upper portion of the cylinder was lined with brick to serve as a cellar for housing the stations cistern and for storing oil, fuel, and provisions. Over 300 tons of riprap stone were placed around the base of the cylinder to prevent scouring.

Although Hooper Island Lighthouse was one of only four Chesapeake lighthouses erected during the twentieth century, it was still not quite modern enough to escape the necessity of human keepers and all of the expensive amenities and equipment required by them. A four-story tower, topped with a watchroom and lantern room, was thus built on the foundation to house the keepers and the stations equipment. The foundation cylinder has a diameter of thirty-three feet, and as the towers diameter was only eighteen feet at its base, there was room for a covered gallery around the first level of the tower. A fourth-order Fresnel lens, manufactured in 1888 by F. Barbier & Company of Paris, was installed in the lantern room and exhibited for the first time on the night of June 1, 1902. A fog bell, manufactured by McShane of Baltimore in 1901, was mounted on the watchroom gallery, where it was alternately struck a single and double blow every twenty seconds during thick or foggy weather.

Hooper Island Lighthouse sits in eighteen feet of water about three miles west of Middle Hooper Island. The foundation extends eighteen feet above the high waterline, and the focal plane of the light is sixty-three feet. In 1904, the lights characteristic was changed to fixed white punctuated by a flash at fifteen-second intervals. Hooper Island Lighthouse was electrified in 1936, and at this time a Cunningham diaphragm fog horn was installed and the lights characteristic was changed to the repeating ten-second signature of a one-second flash, two-second eclipse, one-second flash, and six-second eclipse.

In 1925, a wealthy woman in New York sent twelve radio sets to the superintendent of the Baltimore lighthouse district to afford relief from the loneliness experienced by some lighthouse keepers, who were often cut off from human contact for long stretches of time. One of these radio sets was installed at Hooper Island Lighthouse, and its keeper sent the following report on it: This radio set received and installed through the wireless operator of the tender Maple, put in good shape, and gives perfect satisfaction in every respect. Many thanks to office for same. Will address the donor in a day or so and thank her for the gift at this station.

Hooper Island Lighthouse was fully automated on November 21, 1961, at which time the light characteristic was changed to a white flash every five seconds. The fog horn subsequently operated continuously from September 15 to June 1 of each year. When the Coast Guard crew was withdrawn from Hooper Island Lighthouse in 1961, Old Plantation Flats Lighthouse became the only staffed lighthouse on the eastern side of the Chesapeake.

When the Coast Guard called at the lighthouse during a regular visit on September 15, 1976, they discovered that the original fourth-order Fresnel lens had been stolen, necessitating the installation of a new solar-powered beacon.

Anchored in the center of the cellar level and extending upwards to the floor of the lantern room, is a hollow iron column with a diameter of thirteen inches. This columns primary purpose was to bear the load of the upper floors, though it also likely comprised the free-fall zone for the counterweights used to strike the fog bell and rotate the lens.

The towers first level served as the stations kitchen, and still has parts of an old cabinet that once contained a sink, which drew water upwards from the cistern in the cellar. The second, third, and fourth levels contained office, bedroom, and living space for the keepers. The second and third stories have three windows each, while five circular, porthole windows provide light for the fourth level. For the bottom four levels, the tower is lined with bricks whose faces were glazed white to provide a smooth finish.

While the floors in the bottom four floors were originally wood, the floors of the watchroom and lantern room consist of cast-iron plates featuring a diamond pattern. In the center of the watchroom is a curved ships ladder that provides access through a trapdoor to the lantern room. The original iron lantern pedestal is still in place here, and curved, diamond-shaped panes of glass are used in the circular lantern room.

In 2006, the lighthouse, deemed excess by the Coast Guard, was offered at no cost to eligible entities, including federal, state, and local agencies, non-profit corporations, and educational organizations. Dorchester County and the U.S. Lighthouse Society both submitted applications for the lighthouse, and in May 2009, the deed for the tower was given to the U. S. Lighthouse Society, who also shares responsibility for Thomas Point Shoal Lighthouse.

In February 2017, the federal government announced it was searching for a new steward to assume ownership of the lighthouse, as the U. S. Lighthouse Society was amenable to voluntary reversion or re-conveyance of the property.

For a larger map of Hooper Island Lighthouse, click the lighthouse in the above map.

This light is best viewed from the water. Sawyer Charters offers Chesapeake Bay Lighthouse Tours that pass by Hooper Island Lighthouse, as does Calvert Marine Museum.

The lighthouse is owned by the United States Lighthouse Society. Tower closed.