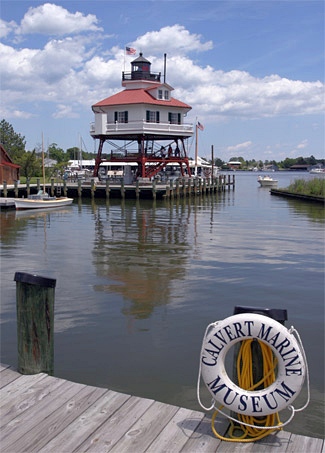 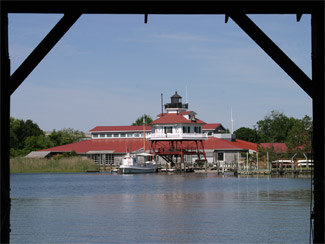 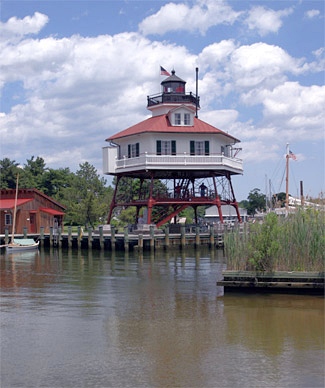 The first proposal to build a lighthouse near the shoals at the northern approach to the Patuxent River occurred in 1838 in the form of a report from Lt. William D. Porter to the Secretary of the Treasury that noted that many vessels sought protection in the lee of Drum Point but often ran aground on the low sandspit that projects from the point. Sixteen years elapsed before congress made a $5,000 appropriation for the structure, but further action was then delayed until 1856 as Maryland was reluctant to deed the property over to the federal government, and there was debate over the fair value and size of the required plot of land.

In 1856, W.H. Murdaugh, the inspector for the Fifth Lighthouse District, visited the site where a number of boats had grounded on a shallow strip of land and decided that the lighthouse should be placed on the extreme south point of land, and that the beacon should be twenty-five feet high and equipped with a sixth-order Fresnel lens. The inspectors report prompted the fifth districts head engineer to perform a test boring at the site. With the full power of 4 men with 175 lbs. on the auger, the engineer managed to penetrate through very hard sand down to a depth of 13 ½ feet. He recommended that screws be driven down to a depth of eight or nine feet, and concluded that this would provide plenty of support for the proposed lighthouse as it was entirely onshore and was in no danger of being washed away.

These early surveys came to nothing, however, as the land transaction was never completed. It is not definitively known why, but it is possible that a plan to bring a railroad to Drum Point overshadowed using the land for a lighthouse. Whatever the case, it was not until 1883, and at the urging of numerous steamboat companies, that the title for five acres of submarine land just off Drum Point was conveyed to the federal government. A congressional appropriation of $25,000 was originally intended for two range lights, but the Lighthouse Board decided that a single screwpile lighthouse was more suited to this budget and to the location.

Construction of the light was achieved by prefabricating most of the parts and barging them to the site. In this manner, the beacon was erected in about a month. Allentown Rolling Mills of Philadelphia provided the wrought iron piles for the foundation, which were ten inches in diameter and bored directly into the sandy river bottom. Workers began assembling the structure on July 17, 1883, and the lighthouse was activated just over a month later on August 20. The first keeper was Benjamin M. Gray, who had previously served as assistant keeper at nearby Cove Point Lighthouse.

Drum Point Lighthouse is a white hexagonal cottage of 1 ½ stories sheathed in clapboard siding and covered with a seamed metal roof painted sienna red. The main level possesses a gallery deck with square balustrades and a circular handrail, and there are six double hung windows that overlook this level. Two doors provide entry into a first level sitting room, dining room, kitchen, and a bedroom for the keeper. A wooden support column extends through the center of the lighthouse, and a spiral staircase winds around this pole. The structures second story sports an extra bedroom and a space for the fog bell. A second staircase ascends to the lantern room, which has cast-iron mullions and a pyramidal roof capped by a ventilator ball and lightning rod. The octagonal lantern room is painted black and is made of wood sheathed in metal.

The station originally possessed a fourth-order Fresnel lens whose red light could be seen at a distance of eleven nautical miles. The lens was specially manufactured by the French firm of Henry-Lepaute to shine light over only 270 degrees of a full circle, as the remaining portion would have been cast over land. The stations fog bell weighed 1,400 pounds, and was cast in 1880 by the McShane Bell Foundry of Baltimore. A thirty-pound hammer struck the bell a double blow four times a minute when visibility was poor, and the keeper was required to wind the 600-pound weights that powered it every two hours.

A dark sector was added to the lighthouses fixed red light on December 10, 1899, after a petition was presented to the Lighthouse Board the previous year requesting that a sector be added to cover Sandy Point bar off Solomons Island. The petition was signed by the president of the Weems Steamboat Company and a number of captains that regularly sailed the Patuxent River. The lights characteristic was changed in 1911 to a fixed white light with three red sectors covering dangerous shoals near the rivers entrance. When mariners observed a white light, they were assured that their approach to the river was free of hazards.

Drum Point Lighthouse has been fortunate to avoid the fate of many Chesapeake Bay screwpile lighthouses, which being in deep water were often damaged by ice floes, struck by ships, or wrenched off their foundation pilings altogether. The lighthouse was originally built in ten feet of water, but the effects of shoreline silting reduced that depth over the years. By 1900, the bay only came three feet up on the pilings, and in the 1970s Drum Point Lighthouse was perched above dry land.

Despite its relatively safe location, a few incidents from the stations surviving logbooks are noteworthy. In 1885, a sloop dragging its anchor struck the lighthouse. It was suspected that the boats crew was drunk, especially since one of them fell overboard and had to be rescued. An 1886 earthquake emanating from Charleston, South Carolina struck the lighthouse with enough strength to slam doors, rattle the fog bell machinery, and wake the keepers children. In the winter of 1895, an ice floe from the river struck the station and knocked over some chairs, although the lighthouse avoided further damage. The greatest misfortune to befall the beacon occurred in 1933, when a severe gale caused the water level to rise, flooding the lower level of the cottage, sweeping away instruments owned by the weather bureau, and taking the station's phone out of commission. One of the gaffs on the davit gave way, dropping the station's motorboat, which flooded and sank. Keeper John J. Daley was able to safely swim the short distance to shore and file a damage report.

In 1944, the lighthouse was equipped with electricity, though during the years of World War II the beacon was often extinguished. The lights last civilian keeper, John Hansen, recounted how the light had to be turned off during military training exercises on the bay to avoid giving enemy ships easy targets. The lighthouse was semi-automated in 1960, when John Hansen retired, and was thereafter staffed by three coastguardsmen, who would work twelve days on followed by six days off.

Drum Point Lighthouse was decommissioned in 1962, having been replaced by a nearby modern navigational aid. Over the ensuing decade and a half, acts of wanton vandalism did severe damage to the lighthouse. A total of twelve windows and twenty-two doors on the structure were broken in. Fires were set in various parts of the lighthouse, the gallery railing was torn away, the lantern glass knocked out, and the interior was covered with graffiti. Even the most valuable and historic parts of the lighthouse were not spared, as the original cast iron pedestal for the lens was torn off and thrown from the lantern deck. Attempts were even made to dislodge the fog bell, but a concerned marine contractor from the area used his crane and barge to remove it to a safer locale. The jettisoned pedestal was later found in the sand by a resident of the area. The situation became so dire that ex-keeper John Hansen, who still lived close to the lighthouse, purposely stayed away from Drum Point as he could not bear to see the condition of the structure.

It is unfortunate that the lighthouse fell into such a state, as the Calvert County Historical Society had sought to restore the station as early as 1966, however, government red tape and private land access issues prevented the society from taking action for almost a decade. In the meantime, the abandoned structure was listed on the National Register of Historic Places in 1973.

The federal government eventually decided to deed the lighthouse to Calvert County, but to keep the land for itself. The society obtained a $25,000 grant from the Maryland Historical Trust to move the lighthouse two nautical miles up the Patuxent River to a pier on Backwater Creek, near the Calvert Marine Museum. These funds may have been insufficient for such an enormous job, but the Savannah, Georgia based B.F. Diamond Construction Company, who was in the area working on a bridge, agreed to undertake the move for the allocated sum. The company brought a tugboat and barge with a steam powered crane, which had a 110-foot boom to lift the screwpile lighthouse. The first step was to cut the iron pilings, and the crew was surprised to find that these ten-inch diameter beams were composed of solid metal. This necessitated an extra day for cutting, and also meant that the structures weight was much greater than anticipated. Still, within two days the forty-one-ton lighthouse was freed from its foundation, and on March 27, 1975, it was barged to its new home at the museum.

A number of grants from the National Park Service, the Maryland Historical Trust, and private individuals funded the complete restoration of Drum Point Lighthouse, and it was officially dedicated and opened to the public on June 24, 1978. Tours are offered almost every day by the Calvert Marine Museum, and living history programs are sometimes provided as well. Anna Weems Ewalt, who was born at the lighthouse in 1903, provided detailed recollections of its interior furnishings and donated some of her familys heirlooms to increase its historical authenticity. Upon Anna's passing in 1995, the sum of $45,000 from her estate was given to an endowment fund to preserve the lighthouse for future generations.

For a larger map of Drum Point Lighthouse, click the lighthouse in the above map.

Visit the Calvert Marine Museum website for detailed directions to the museum. The museum is normally open from 10 a.m. to 5 p.m. daily except on Thanksgiving, Christmas, and New Years Day.

The lighthouse is owned by the Calvert Marine Museum. Grounds/dwelling/tower open.