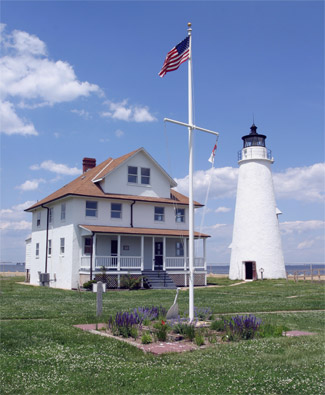 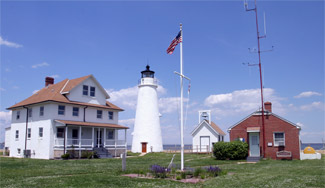 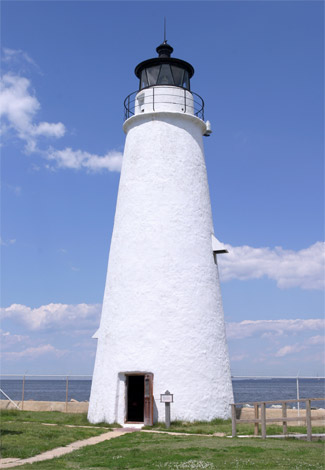 Cove Point Lighthouse was originally intended not for Cove Point but for Cedar Point, located roughly six miles to the south. Prompted by the petitions of mariners for the construction of a lighthouse to assist vessels entering the Patuxent River, Congress provided $6,000 on March 3, 1825 to allow the Secretary of the Treasury to build a lighthouse on Cedar Point, at or near the mouth of Patuxent River, but when a light on nearby Cove Point was deemed more important, Congress appropriated $5,685 on February 12, 1828 for erecting a lighthouse on Cove Point, instead of Cedar Point, as heretofore ordered.

Four-and-a-half acres of land at the tip of Cove Point were acquired from Dorcas G. Bourne for $300 in 1828, and prolific lighthouse builder John Donahoo was awarded the construction contract. The lighthouse at Cove Point is a thirty-six-foot-tall masonry tower in the shape of a truncated cone, a design commonly used by Donahoo, and the tower and its accompanying one-and-a-half story keepers dwelling were both made of local brick. The house originally measured twenty by thirty-four feet and had an attached twelve by fourteen-foot kitchen, while a cistern for storing rainwater was located in the dwellings cellar.

The tower possesses a beautiful winding staircase that ascends to the lantern. The treads of the staircase are triangular, with the outermost side of each step imbedded in the towers masonry and the innermost edge fitted to a central column. Accompanying the central column is a square wooden tube, which held the counterweights formerly used to rotate the lens.

The door to the lighthouse faces west, while three windows face the other three cardinal points to light the interior. The lighthouses black lantern is circular, and its triangular glass sections are held in place by cast-iron mullions. Encircling the lantern room is a stone deck that extends out eighteen inches from the tower and supports a cast-iron safety railing. One large iron plate composes the entire floor of the lantern room, within which remains a box made of glass and brass that contains machinery for rotating the light. This equipment is connected to counterweights and, though not used, is still functional.

James Somerville was the first keeper of the light, which was first shown in December 1828. He was selected from a pool of eleven applicants and was paid $350 a year. In Somervilles day, the Fresnel lens was not yet in use in the United Sates, so thirteen oil lamps and as many parabolic reflectors, provided by James Geddes, served as the original light source. This setup necessitated diligent trimming of the lamp wicks, as burned wicks created extra smoke that dirtied the lighting apparatus and obscured the light. Another early hardship was hauling the fuel up the spiral staircase, which Somerville and other keepers did four to six times each day. Initially whale oil, which provided a lucid and unwavering light, was used, but a decline in the whaling industry eventually raised the price of the oil to a prohibitive amount. Other fuels were utilized throughout the nineteenth century, including experiments with canola oil extracted from wild cabbage plants. The Lighthouse Board pleaded with farmers to grow more of this vegetable, as it did not grow in abundance naturally. Eventually other fuels like lard oil, kerosene, and incandescent oil vapor all took their turns powering Cove Points light.

The fuel problem was partially solved on June 21, 1855 through the installation of a fifth-order Fresnel, which required only a single lamp. In 1857, the lens was upgraded to a fourth-order, which like the smaller model also produced a fixed white light varied by flashes. The need for fuel was entirely obviated in 1928, when the light was converted to electric operation. At this time, a different fourth-order Fresnel lens, stamped with the manufacturers name of Barbier and Benard, was installed in the lantern room. Although the light was electric, the keepers still needed to wind up the counterweights to rotate the lens until an electric motor was later added for this purpose.

A second story was added to the keepers dwelling in 1883. The Lighthouse Board reported that the roof of the dwelling was removed in May, the walls were raised, and a new roof, covered with tin, was constructed. The report went on to assert that with the addition, the station has six good rooms and a good basement or cellar, and is in excellent order. In 1925, a large dormer structure was placed atop the dwelling to provide another half-story of living space. The enlarged structure was then divided into two apartments for the head keeper and an assistant. By tradition, the head keeper always lived in the side of the dwelling nearest the tower.

The station tasks, which included fueling the lamp, dusting, polishing the lens, winding the lights rotational mechanism, and cleaning the copper and brass portions of the station, were divided into two shifts. The keepers wore linen aprons to keep from damaging the lens, and the lens was covered with linen cloth each morning to protect it from the sun.

Cove Point saw a great many upgrades to its auditory warning system, both due to breakdowns and advances in technology. Funds for the original fog bell were appropriated in 1837. At various points from 1858 to 1887, Lighthouse Board reports indicate that the fog bell tower had to be significantly reworked or replaced altogether. In 1892, the encroaching Chesapeake waters had reached the fog bell tower, requiring it to be moved back sixteen feet. In 1898, a thirty-one-foot-tall iron fog-bell tower replaced the stations dilapidated wooden one. The new square, pyramidal tower stood on and was anchored to three-foot-square brick piers.

The iron structure lasted just three years, after which time the fog bell was rendered obsolete by a second-class Daboll trumpet powered by an air compressor. A twelve by sixteen-foot frame building was constructed to house the new machinery, and the old iron bell was mounted on its roof as a backup. Around 1950, the fog signal equipment, which had been through several incarnations over the years, was moved to a new thirteen by twenty-two-foot brick building that also housed equipment for a radiobeacon. The radiobeacon commenced operation at the station in 1928. Both the wooden and brick structures remain onsite today.

Shoreline erosion has been a persistent problem at the station, and has threatened the lighthouse as much as any other structure. In 1892, a seawall was built to hold the ground in place. It was composed of 4 inch sheet piling, 12 feet long, forced into the ground and backed by 6 inch waling pieces, bolted to heavy piles, 25 feet long, driven 12 feet apart on a line 340 feet long. A reinforced concrete seawall replaced the wooden version in 1913, and this was rebuilt in 1993. These efforts have succeeded in keeping the shoreline just a few feet removed from the towers foundation.

On March 15, 1917, seventy-two-year-old Keeper Richard S. Daniels, an uncle of Secretary of the Navy Josephus Daniels, dropped dead of heart disease at Cove Point Lighthouse while talking to Captain T.J. Miles of the lighthouse tender Maple. Just nineteen months earlier Keeper Daniels went to Washington D.C. to visit his nephew, who said to him, Come right in Uncle Dick. Come right in and get that coat off so we can enjoy a cigar together on the back porch.

A powerful hurricane struck the Chesapeake Bay area in August 1933. Esther Metivier, daughter of assistant keeper Herman Metivier who was serving at Cove Point at the time, later provided an account of the event:

My recollections of the 1933 storm were scary. The Grooms left for higher ground while they could, but my dad decided to weather it out! To look out the windows it seemed like we were in the middle of the bay! We had chickens  I saw some of them balancing on a board as they went by. Dad put the goats on front porch, but the chickens were gone for the most part. I think some of them flew up in tree tops. Dad also had a row boat tied to front porch! He said if the sea wall went the house would too! The furnace in the basement went out because the basement filled with water. I forget how long the storm last but it seemed too long! We didn't have to use the row boat, thank the Lord.

Donahoos tower has retained its structural integrity over the years, thanks to regular maintenance. Plastering, painting, cement work, and roofing have all contributed to a pristine station. Until 1986, a trio of coastguardsmen with rotating shifts took care of the lighthouse, which helped cut down on the vandalism that has plagued similar structures. Each of the keepers worked eight hours on and eight off for two days and was then given a full day to recuperate. In the twentieth century, the keepers were saved the necessity of frequently climbing the stairs, as a switch at the base of the tower turned the light on and off. Cove Point Lighthouse and Thomas Point Lighthouse were the last two staffed lighthouses on Chesapeake Bay when they were automated in August 1986.

Located in a vacation area, the lighthouse received a lot of visitors. Many vacationers would walk right up to Coast Guard personnel, who resided in the old keepers house and other buildings, and request tours of the lighthouse. The addition of a fence helped control this situation.

The lighthouse was completely automated in 1986, when a fog detector, a lamp-changer and a computer connected to headquarters obsoleted the keeper position. In October 2000, the station was officially transferred from the Coast Guard to Calvert County, and since then the Calvert Marine Museum has been in charge of providing public access. The station remains an active aid to navigation, and for a few years caretakers lived in the single-story frame cottage that was built by the Coast Guard as enlisted quarters around 1950.

The Calvert Marine Museum Society hired a company to provide a marketing and use study on the property. The company's recommendation was to use the keeper's dwelling for weekly vacation rentals, and after the society raised $600,000, it had the house renovated and divided down the middle to serve as two rental units. Each side has three bedrooms, two-and-a-half bathrooms, a kitchen, and a living room. Work started in June 2011 and was finished a year later.

The interior was painted with the colors sand, grass, sea, and sky, to tie in with the bayside setting. The kitchen table in one of the units was made locally using materials from the dismantled Cedar Point Lighthouse. The site still remains open to the public during visiting hours.

Located on Cove Point four miles north of the entrance to the Patuxent River on the western side of the Chesapeake Bay.
Latitude: 38.38631, Longitude: -76.38172

For a larger map of Cove Point Lighthouse, click the lighthouse in the above map.

The lighthouse is now managed by Calvert Marine Museum, who rents out two units in the keepers' dwelling. Current hours for visiting are: June, July, August: 1  4 p.m. daily; September and May: 1  4 p.m. weekends and holidays. Visitors can drive directly to the site; no shuttle is required. Call the museum for more information: (410) 326-2042.

The lighthouse is owned by Calvert County and managed by the Calvert Marine Museum. Grounds open in season, tower closed.