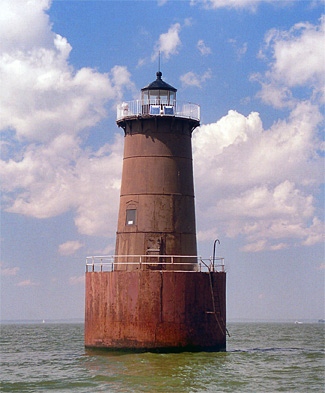 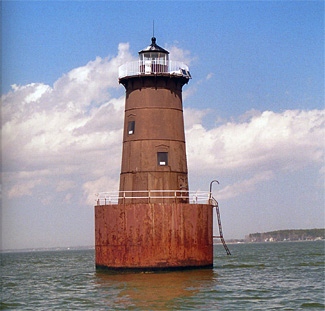 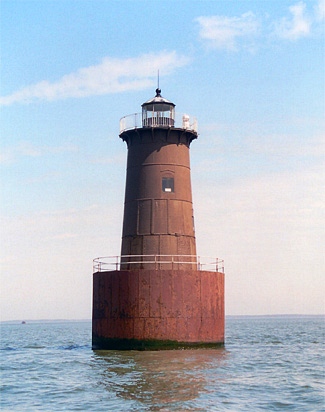 Bloody Point Bar Lighthouse is located just off the southern tip of Kent Island, marking the entrance to Eastern Bay. Though the lighthouse stands in about seven feet of water and warns mariners of shoals near Poplar Island with a red sector, it is also close to one of the Bays deepest shipping channels at 174 feet.

The lighthouses name is apropos since the nearby point according to legends has been the scene of a number of violent events throughout history. In the early days of the nation, a group of Indians was reportedly enticed to the area by English colonists, who then butchered the trusting natives. It is also rumored that a villainous French pirate was hung at Bloody Point. Though the authenticity of these tragic events may be questionable, the charred and hollow shell of iron that is Bloody Point Lighthouse provides tangible evidence of a tragic fire that very nearly killed two crewmen.

The Lighthouse Board first included a proposal for Bloody Point Lighthouse in their annual report of 1868, after numerous petitions requesting a light at the point had been received, but thirteen years would pass before Congress finally provided $25,000 for the project on March 3, 1881. The Board decided upon an iron caisson 30 feet in diameter and 30 feet high, surmounted by an iron tower 37 feet high  specifications very similar to the structure then being built for Sharps Island. The contract for erecting the lighthouse was granted to Thomas Evans, while the ironwork was supplied by the same foundry used for Sharps Island.

Construction began in earnest on June 5, 1882, and by the end of that month a large wooden platform had been erected at the site upon which a derrick mast, concrete mixer, and an engine were placed. Twenty-two piles were driven into the seabed, and a floor of six by twelve-inch timbers was constructed to provide a strong foundation for the caisson. The first tier of plates composing the cylinder was then bolted together, attached to the flooring, and lowered into position atop the piles. When the final levels of plates had been attached, the cylinder was filled with over 700 cubic yards of concrete.

By the end of August, a thirty-seven-foot-tall, cast-iron tower had been erected on the caisson and lined with brick. On the towers lower levels, various windows and the entry door were set in pedimented cast-iron openings, while the watchroom level was adorned with circular, porthole-type windows. The lighthouse interior originally consisted of five rooms, one of which was located below the waters surface. This basement room was accessed by a steep ladder and housed twin 250-gallon water tanks that collected rainwater. The first level contained an all-purpose room that served as a kitchen, parlor, radio room, and dining room. A spiral staircase led up to the second and third levels, with their spartan sleeping rooms, and then on up to the watchroom. The lantern room is a ten-sided, cast-iron creation and originally contained a fourth-order Fresnel lens with a range of thirteen miles. J. Regester & Sons of Baltimore cast the fog bell for the station in 1882.

All the construction work was finished rather promptly, allowing the light to be exhibited on October 1, 1882. The Board was pleased that besides marking the entrance to Eastern Bay the new Bloody Point Lighthouse was also a useful Chesapeake Bay light, as mariners could make a straight run from it to Sandy Point buoy, or the reverse, thus avoiding Thomass Point Shoal, should that light be destroyed by the ice.

The Board definitely favored caissons at this time, having learned that screwpile lighthouses could sometimes become dislodged from their foundations and float away with sheets of heavy ice. The caisson at Bloody Point was not invulnerable to damage, however. Severe storms during the winter of 1883 struck the lighthouse, scouring the sand from under the northwest side of the light-house and causing a settling of the structure toward that direction. Bloody Point was found to be leaning five feet from perpendicular at its lantern room, and riprap stone was hastily put down around the affected northwest corner. This solution was inadequate, though, as that stone was either carried away by storms or so heavy that it sank into the soft mud of the Chesapeake.

In November 1884, the Board tried a more drastic means of eliminating the lighthouses tilt. Sand was dredged out from beneath the side opposite the list, successfully reducing the inclination by half, and heavy brush mattresses were placed all around the lighthouse and weighted down with small stones. In the spring of 1885, the seabed around the lighthouse was further secured by 760 tons of larger stones, which were used to form a scour apron. This technique has kept the lighthouse aligned within two degrees of vertical to this day, and the scour apron is visible at low tide.

The characteristic of the light was changed on April 15, 1888 from fixed red to fixed white with an eighty-eight-degree red sector covering the shoals off Poplar Island.

The public got a report on the condition in which lighthouse keepers were required to keep their stations when Keeper Hiram White and Louis Carmen, his assistant, rescued Mrs. Carl J. Hammersla and eight other people from her forty-five-foot boat in 1939. The keepers quickly whipped up a meal for their unexpected guests, and Mrs. Hammersla remarked that the floors and walls [of the lighthouse] were so spotless you could eat from them.

Bloody Point Lighthouse received a number of maintenance upgrades in 1899. Specifically, the stations copper smoke pipe was refurbished, the pipes for the water tanks were repaired, the machinery for the fog bell was replaced, and various doors and windows also received care. The stations overall appearance, however, remained much the same until 1960, when an electrical short caused a fire to erupt in the lighthouse in the early morning hours of April 30th. Two young coastguardsmen, Mark Mighall aged nineteen and Heywood Savage twenty, were in the lighthouse. Savage was on the third floor writing letters and rousted Mighall out of bed when he saw smoke billowing up from below. The pair attempted to quell the flames as they spread outwards from the equipment room. We would use the extinguishers until the smoke got us, then run outside for air, said Mighall. We did this maybe three or four times until the fire spread into the kitchen and living room. At this point it was evident that the flames would reach a storage room containing a 500-gallon fuel tank, so the two decided to abandon the station. They lowered the escape boat by using a twenty-foot oar to operate the manual clutch on the boat hoist. The boat descended through flames until it just touched the water, but could not float free of the davits. Neither of us had a knife to cut the block and tackle. We were stuck there, an inch from escape, recounted Mighall. Right before the terrible explosion a large wave lifted the boat and freed it, allowing the two coastguardsmen to escape with their lives and reach Tilghman Island around 1 a.m. Savage suffered minor burns like a cook spattered with grease, while Mighall was uninjured.

The blaze was fought by a Coast Guard cutter and two other boats for more than six hours, but the wooden interior of the structure was a total loss. A crewman aboard a forty-foot firefighting boat said the lighthouse was glowing like a cherry-red pot-bellied stove when they arrived around 1:30 a.m. The lens fell victim to the blaze as well, so a temporary buoy was used until the damaged lighthouse was automated with an acrylic lens in 1961. At this time, the interior was gutted and external features such as the lower gallery roof, stovepipe, and davits were eliminated. Only a single steel ladder and the exposed cast iron plates remain.

The heat stress from the fire and subsequent corrosion has caused widespread cracking of the towers plates. In addition, water has seeped between the steel cylinder and its concrete filling. Freezing of this seepage during the winter has caused some damage to the caisson. Only the cantilevered lantern deck, composed of cast iron triangle plates, remains in relatively good condition. Solar panels power the modern lens, which is still an active aid to navigation.

On December 7, 2006, Bloody Point Lighthouse was purchased at auction by a Nevada-based lawyer named Michael Gabriel. The online auction, conducted by the General Services Administration, opened at $5,000 on September 22, and as the tentative closing date approached, the bidding heated up. After several extensions to the auction, Gabriel finally won the 124-year-old lighthouse with a bid of $100,000.

Fortunately, Mr. Gabriel is committed to restoring the light, and he initially plans to add a dock. Later, he would like to contract out the work of restoring the kitchen and living areas. He sees the dilapidated condition of the lighthouse as a positive factor in its eventual restoration: This way, he said, its all ready to go. He admitted that he may have a bit of an eccentric bent, but he is quite serious about spending upwards of $200,000 on restoration. He is considering donating the structure to a non-profit following his work; a nearby Baptist church has already expressed interest in maintaining it.

In August 2009, Gabriel announced that he would be dedicating a room in each of his offshore lighthouses to a brewery. Im starting this process with Bloody Point and Fourteen Foot before moving on to Borden Flats, Gabriel explained. Were not talking about a huge amount of beer here, something like 20 to 40 barrels a week that we will look to sell to local restaurants and breweries. My hope is to have the breweries pay for the lighthouses ongoing maintenance. We will already be using the desalination process in here to create water, but the device I am purchasing creates so much more water than we will need, and this seemed like a great use for it. We want to create a unique beer here, and it will be unique  the only one made from seawater.

As the desalination systems costs around $100,000 and renovating the lighthouse will be more than that, having a money generating operation isnt a bad idea. Though an official name hasnt been selected for the beer, Sea Ale and Lighthouse Brew have been considered.

Michael Gabriels big plans for the lighthouse were never realized, and it appears nothing was ever done to rehabilitate or stabilize the lighthouse. Doug Roberts took this picture of the tower in 2017 that shows a large section of the tower has broken off, exposing the interior of the lighthouse to the elements. This damage had occurred more than a year earlier.

For a larger map of Bloody Point Bar Lighthouse, click the lighthouse in the above map.

This lighthouse is best viewed from the water, but distant views are likely possible from the southern end of Kent Island. Kent Island is located at the eastern end of the Chesapeake Bay Bridge.


Bloody Point Bar Lighthouse can be seen in the closing scenes of the movie "Failure to Launch," when Sarah Jessica Parker and Matthew McConaughey are sailing on Chesapeake Bay.