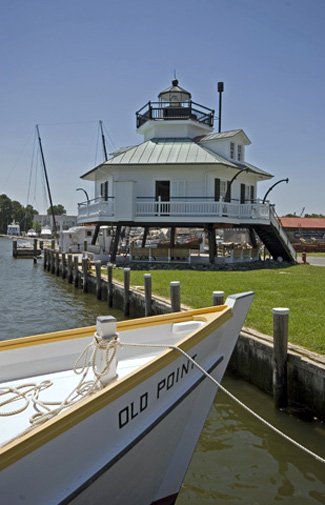 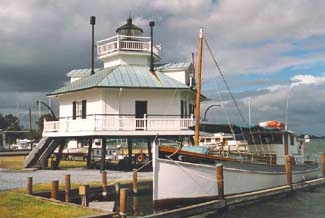 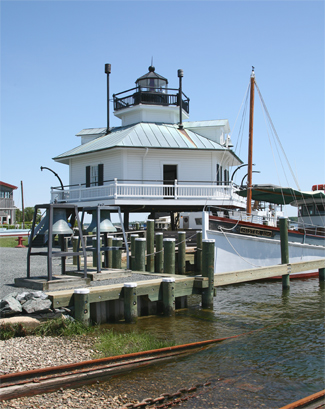 Hooper Strait is a roughly mile-wide passage that connects Chesapeake Bay with Tangier Sound. The eastern Maryland mainland forms the northern boundary of the strait, and Bloodsworth Island, once renowned as a haven for pirates, is located on the southern side. Captain John Smith gave this entrance into Tangier sound a name that conjures up an image of the many contortions required of mariners to pass through the areas dangerous shoals: Limbo Straits.

Efforts to shine a light on this precarious place began with light-vessel deployment, with the first of these floating beacons being stationed at Hooper Strait in 1827. The ships fixed white light was elevated to a focal plane of thirty-four feet and could be seen from ten miles. The last light vessel sent to keep watch at Hooper Strait was built in 1845, and was destroyed by Confederate guerrillas during the Civil War.

Following the war, the Lighthouse Board took advantage of the opportunity to implement a long-desired plan, namely to replace lightships, wherever possible, by permanent structures that were less costly to build and maintain. During the twelve-month-period ending June 30, 1867, screwpile lighthouses were erected at eight stations in the Fifth Lighthouse District that were formerly served by lightships for a total cost of $121,001.

The screwpile lighthouse placed in Hooper Strait consisted of a square dwelling surmounted by a lantern room, and it first exhibited its fifth-order light on the night of September 14, 1867. The structure served faithfully for nearly ten years before being destroyed by ice on January 11, 1877. Three days of building ice and tidal pressure was enough to snap the bolts that held the foundation braces together, and the unsupported dwelling quickly sank up to its roofline, with John S. Cornwell, the lights second head keeper, and his assistant Alexander S. Conway still on station. The two keepers escaped the lighthouse using one of the stations boats, which they pulled over the ice.

For twenty-four hours, the keepers remained stranded on the ice with only the boat to shelter them. Captain Murphy of Billys Island finally rescued the keepers, who suffered severe frostbite from the prolonged exposure.

Two lighthouse tenders, the Tulip and Heliotrope, were dispatched to find the castaway house, which they located five miles south of Hooper Strait submerged to its roof in water. The crews were able to salvage the lens, lamp, and fog bell, but had to call off further operations due to dangers from the heavy ice.

In reporting the incident, Keeper Cornwell apologized for his inability to submit his quarterly report as it had been lost with the lighthouse. Though frostbitten, Keeper Cornwell insisted that should there be another house erected, or a boat placed in the site of the old one, Capt. Conway and myself will be ready to take charge of it

On June 20, 1878, Congress appropriated $20,000 for a new screwpile structure at Hooper Strait. This cottage-style lighthouse was constructed at the Lazaretto Depot in Baltimore and consisted of a hexagonal dwelling, painted white and topped by a black lantern. When completed, the superstructure was transported by schooner to the site, where the screwing down of the seven iron support piles had commenced on September 21, 1879. The Annual Report of the Lighthouse Board for 1880 records: The piles were placed in their position without any difficulty, the struts, tension bars, and sockets were fitted in place, and the wooden frame of the house was raised. The structure was ready for lighting early in October and on October 15, 1879, its light shone for the first time. True to his word, Keeper Cornwell did return to his post as keeper of Hooper Strait Lighthouse. The Lighthouse Board was confident that the new lighthouse, which was mounted atop solid, wrought-iron piles with a diameter of ten inches, would fare much better than its predecessor, which rested on sleeve-piles.

In 1882, the stations light, which was originally fixed-white, was outfitted with red sectors to warn mariners of shoals in the strait. The effects of the Charleston Earthquake of 1886 were felt at the station by Keeper Zebedee Harper, who had just replaced Keeper Cornwell the previous year. Keeper Harper provided the following information on the quake to the Lighthouse Board: an earthquake shock occurred at 9.55 p. m. on August 31, which lasted about a minute and a half. There were two shocks; the first at 9.55 and the second about 10 oclock. They were both light, but they set the weights in the windows to rattling. There was no other noise than a rumbling at the time, and the weather was clear, with a moderate breeze.

In September 1918, Keeper Calvin Bozman sailed back to the lighthouse after a short shore leave to relieve assistant Ulman Owens. Several days later, the captain of a steamer noticed the lighthouse was dark and notified the Lighthouse Service in Baltimore. Keeper Bozmans body was discovered a short time later drifting in the strait by the captain of an oyster schooner, and a formal investigation determined that the keeper had fallen off the lighthouses storage platform while sawing wood and drowned.

An even more gruesome fate was to befall Ulman Owens, who eventually ended up as keeper at Holland Island Bar Lighthouse after having earlier served seven years as assistant keeper at Hooper Strait. In 1931, authorities visited Holland Island Bar Lighthouse, after its light had not been seen on the nights of March 13 and 14, and found Keeper Owens body lying on the kitchen floor with its left arm stretched out toward a blood-covered butcher knife. While the official cause of death was listed as natural causes, the fact that the lighthouse had been ransacked and that Owens body had sustained injuries leads many to believe that the keeper was killed by a rumrunner or a jealous husband.

Hooper Strait Lighthouse was staffed until 1954, when it was completely automated and Keeper George Leikam was transferred to Thomas Point Shoal Lighthouse. Despite having its windows boarded up, the inevitable occurrence of vandalism and decay took its toll on the lighthouse. By 1958, the cost-conscious Coast Guard had initiated a policy of simply burning the screwpile dwellings or paying a contractor to demolish them. The bare screwpile foundation was then used for setting up steel perimeter and radial beams to support a skeletal tower that displayed an automated light at the same height as the original lantern. While inelegant, the result was extremely utilitarian and allowed the Coast Guard to escape the massive commitment of maintaining abandoned lighthouses. In 1966, the Coast Guard planned to rid itself of Hooper Strait Lighthouse either by burning it or hiring a demolition contractor, but before the lighthouse suffered such an ignominious end, the Chesapeake Bay Maritime Museum stepped in and saved the historic structure.

Aided by the Historical Society of Talbot County, which raised $12,500, and the U.S. Treasury, which contributed the $14,000 allotment for the aborted demolition, the museum hired The Arundel Corporation to lift the forty-two-ton lighthouse from its pilings and barge it forty miles up the bay to St. Michaels. A Baltimore firm called Pile Drivers built a new foundation out of tubular steel at the museum using piles provided at cost by the Union Metal Company, also of Baltimore. The piles were sunk twenty-eight feet and then filled with concrete. The steel plates and eight-inch steel beams, which form the support platform atop the piles, were generously donated respectively by the Easton Steel Company and the Chase Steel Company. Sheared in half directly below its eves and sundered from its foundation in Hooper Strait, the structure waited out high winds and waves before arriving at its final home at Navy Point on November 9, 1966.

Today, the lighthouse is the museums most popular and recognizable exhibit. A Fresnel lens housed in the lantern room originally produced a very unique flashing pattern, CBMM in Morse code, but a historically accurate steady white light is now shown. Although the lighthouse is perched above dry land, the interior exhibits give a sense of what life must have been like for an offshore keeper and also provide a brief history of the lighthouse service. Since 2004, the museum has opened the lighthouse to those who would like to experience a night in the life of a keeper. Visitors who sign up for the program are fed dinner, taken on a unique tour of the lighthouse, and are divided into watches and encouraged to engage in some of the daily chores typical of a nineteenth-century light station. The experience culminates with a nights sleep inside the structure itself, which now overlooks the Miles River. The overnight adventure is a wonderful opportunity to get up close and personal with one of the few remaining screwpile lighthouses out of the forty originally built on Chesapeake Bay.

For a larger map of Hooper Strait Lighthouse, click the lighthouse in the above map.

From Annapolis, take Route 50's Bay Bridge over the Chesapeake and continue east to Easton. After passing the Easton airport on your right, exit right onto the Easton bypass/Route 322 South. At this point, you will see signs to St. Michaels and the Chesapeake Bay Maritime Museum. At the fourth traffic light, turn right onto Route 33 West heading towards St. Michaels. After about 9 miles Route 33 becomes St. Michaels' Main Street. In Saint Michaels, turn right onto Mill Street, which leads to the museum. The museum parking lot is on the left-hand side of the street. Note that many locals refer to this lighthouse as St. Michaels Lighthouse rather than Hooper Strait Lighthouse.

The interior of Hooper Strait Lighthouse is open to museum visitors. A fourth-order Barbier & Fenestre Fresnel lens used in the lighthouse is found in the lantern room, and another two Fresnel lenses of unknown origin are on display inside the dwelling: a fifth-order Henry-Lepaute lens and a third-order L. Sautter et Cie lens. The fog bell tower from Point Lookout Lighthouse stands on the grass near the lighthouse.

The lighthouse is owned by the Chesapeake Bay Maritime Museum. Grounds/dwelling/tower open.