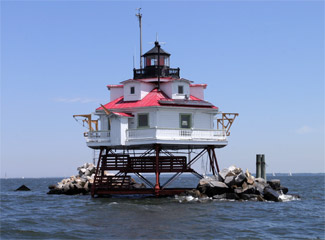 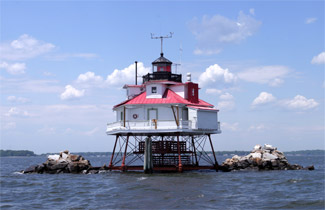 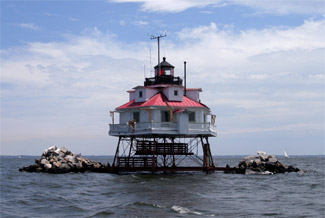 The southernmost point of the peninsula on which Annapolis is situated is called Thomas Point, after Philip Thomas, one of its early owners who arrived in Maryland from Bristol, England in 1651. The need for a lighthouse at Thomas Point was recommended in an 1821 letter from William B. Barney, Naval Officer for the port of Baltimore, to Stephen Pleasonton of the U.S. Treasury:

Many ship owners and seafaring men of respectability have frequently spoken to me on the subject of a light to be placed at the end of Thomas Point bar, a few miles below Annapolis; which extends a considerable distance out into the Bay, cutting the direct track of vessels bound up or down; at the end of which from four feet, you instantly deepen to six and seven fathoms water. A light placed here, would be of as great utility as perhaps any one in the Chesapeake Bay.

The first light to mark Thomas Point was also prolific lighthouse builder John Donahoos first attempt at a lighthouse. After Congress provided $6,500 on May 26, 1824 for its construction, Donahoo began work on a conical, thirty-foot-tall tower, which was eighteen feet in diameter at its base and tapered to nine feet at the lantern room. A cozy, stone keepers cottage was built at the same time, measuring twenty by twenty-four feet and containing two large rooms, each with its own fireplace. Thirteen lamps, set in an equal number of spherical reflectors, were used to produce a fixed white light from 1825 until May 1855, when a fifth-order Fresnel lens was installed in the lantern room.

By 1838, the lighthouse, originally located 500 feet from the edge of a high bluff, was in danger of toppling into the bay. Winslow Lewis, an early associate of Donahoos, was given $2,000 to tear down the old lighthouse and rebuild it behind the keepers dwelling, and a large quantity of rubblestone was placed at the base of the bluff. Over time, erosion reduced the seven-acre acre parcel on which the lighthouse was built to a two-acre island, separated from the mainland by a strip of water. The lighthouse remained standing until 1894, when it too was lost to erosion.

Years before the lighthouse collapsed, the Lighthouse Board had taken measures to replace it. In 1872, the Board reported that the lighthouse at Thomass Point  can serve but poorly its purpose as a warning of the dangerous shoal that makes out from it at a distance of one and one quarter miles into the bay and recommended that a screwpile lighthouse, equipped with a fog bell, be built at the point of the shoal. Congress provided $20,000 for the project on March 3, 1873.

During the winter of 1872-1873, the screwpile lighthouse at Love Point had two of its support columns broken by ice floes, prompting the Lighthouse Board to change the planned foundation for Thomas Point Shoal Lighthouse from screwpiles to a concrete-filled caisson that could be depended on at all times to safely withstand the heavy ice-floes that form above it in the bay. The Board requested additional funds to cover the increased cost of the lighthouse, but after another $15,000 was appropriated by Congress in March 1875, the decision was made to proceed with the original plan for a screwpile lighthouse.

The State of Maryland conveyed five acres of submerged land to the Federal Government on October 28, 1874, and Thomas Point Shoal Lighthouse was ready for its inaugural lighting on November 20, 1875, the same date the old Thomas Point Lighthouse was discontinued. Thomas Point Shoals hexagonal cottage has a diameter of thirty-five feet and rests upon seven piles, a single central pile and six perimeter piles, each of which has a diameter of ten inches. The dwelling is picturesque, exhibiting such careful touches as carved balusters on the walkways encircling both the first level and the lantern, and six dormer windows interrupting the dwellings sloping roof at regular intervals.

The cottages first level is divided into five rooms: a mechanical room, bedroom, bathroom, dayroom, and kitchen. Although the original privy is still cantilevered over the bay from the lower gallery, the Coast Guard installed an indoor incinomode, an electrically superheated toilet that incinerates waste, around 1971. A central, spiral staircase leads to the second floor, where another bedroom and a room that formerly housed the fog bell striking mechanism are located. The lantern room, accessed by a ships ladder from the second level, is situated forty-three feet above mean high tide. After having been replaced by a modern beacon, the historic Fresnel lens formerly housed in the lantern room was removed to the Commanders Office of the Coast Guard in Baltimore.

Thomas Point Shoal Lighthouse was endangered in the winter of 1877, when heavy sheets of ice damaged the screwpile foundation. The crushing impact of the ice overturned the stations original third-and-a-half-order Fresnel lens in January, damaging it badly enough that it had to be replaced by a fourth-order Fresnel lens, manufactured by L. Sautter & Co. As a result, an ice-breaker consisting of three wrought-iron screwpiles, connected together by double channel-iron beams, surmounted by heavy cast-iron caps, securely bolted together was positioned ninety feet north of the light station along the axis of the current. Over the years, tons of riprap have been placed about the piles to provide further protection from ice and scouring.

On April 15, 1888, the stations characteristic of a red flash seen from all directions was altered to display a flashing white light over a 169° arc covering the best water east of the lighthouse and a flashing red light elsewhere.

Head Keeper Daniel A. White went ashore one day in 1903 to buy groceries, and when he returned to the lighthouse, Assistant Keeper Henry Addicks was nowhere to be found. To this day, it is not known if Addicks drowned, committed suicide, or was taken away by someone. Two years later, Head Keeper John B.T. Suit ended up losing his assistant too, but for a different reason. I am sorry to have to report that the assistant Mr. Peter S. Earle is losing his mind and I cannot trust him with the light, Suit wrote his superior. Not long thereafter, a new assistant was assigned to the station.

One example of assistance that was rendered by many of the stations keepers occurred on September 17, 1928, when Keeper Henry Bryant and Earl C. Harris, his assistant, helped seven people, whose motorboat became disabled near the lighthouse. The keepers brought the boat to the lighthouse and repaired its propeller, allowing the boaters to continue on their journey.

By 1964, Thomas Point Shoal Lighthouse was the only staffed offshore station on Chesapeake Bay. Four coastguardsmen divvied up lighthouse duties, with each taking a week of shore leave every four weeks. A lightship tender made a monthly delivery of fresh water, fuel, and supplies. This state of affairs lasted until the 1970s, when a three-man crew, with a two-weeks-on, one-week-off rotation took over. The crewman arriving at the station would bring groceries and mail for the week, and the one leaving would tote away the trash. Scott Kaufman, stationed at the lighthouse in the early 1980s, commented that living at the station gave him plenty of time to think. All the problems you have. You can just sit out here and think out all the angles. Ill even sit here and think about my friends problems. Thats how much time I have.

In 1972, the station felt the effects of tropical storm Agnes, which raised twenty-three-foot waves and brought them crashing down upon the cottage and foundation. The lighthouse managed to survive the assault with only minimal damage, but for a while there was some question if it would survive the Coast Guards announcement that same year that the lighthouse would be evaluated for cost effectiveness. In the past, other screwpile lighthouses had simply been set afire, and then replaced by a low-maintenance structure mounted on the old pile foundation. Public outcry, bolstered by politicians looking for a cause in an election year, managed to change the Coast Guards plans, and on January 23, 1975, Thomas Point Shoal Lighthouse was granted historic landmark status. The Coast Guard staffed the lighthouse until it was fully automated on September 5, 1986. Cove Point Lighthouse and Thomas Point Shoal Lighthouse were the final two staffed lighthouse on the bay.

Under the National Historic Lighthouse Preservation Act of 2000, a consortium of four partners (the Annapolis Maritime Museum, the Chesapeake Chapter of the U.S. Lighthouse Society, the City of Annapolis and Anne Arundel County) took control of Thomas Point Shoal Lighthouse in 2004. The City of Annapolis serves as the owner of the station, leasing it to the Chesapeake Chapter of the U.S. Lighthouse Society, which acts as the managerial organization. The Annapolis Maritime Museum houses exhibits on the lighthouse and serves as a shore-departure point for tours to the lighthouse, while Anne Arundel County offers expert advice on how best to preserve the lighthouse and the surrounding environment.

Over the next eleven years, volunteers painstakingly restored the lighthouse at a cost of around $500,000. Roughly a third of the wrap-around deck on the main level of the lighthouse was rotten and had to be replaced, and most of the structures metalwork had to be cleaned and painted. The lighthouses rooms have been decorated to depict different eras in the stations history. The parlor, outfitted with a potbelly stove, portrays the Victorian period. The kitchen is done in an early twentieth century style, featuring an oil lamp and a flatiron for pressing clothes, and one of the bedrooms resembles a navigation room that the Coast Guard used in the late 1970s. Lighthouse enthusiasts are now fortunate to have the opportunity to tour the only unaltered screwpile lighthouse in the United States remaining attached to its original foundation.

For a larger map of Thomas Point Shoal Lighthouse, click the lighthouse in the above map.

The lighthouse is owned by the City of Annapolis. Dwelling/tower open during tours.