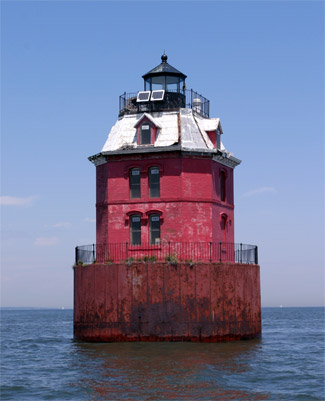 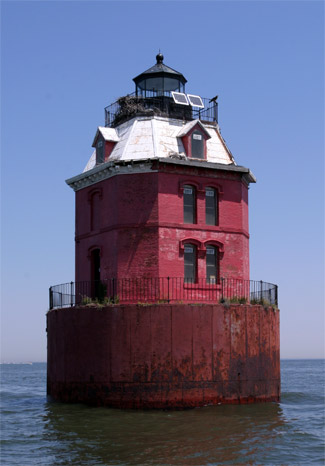 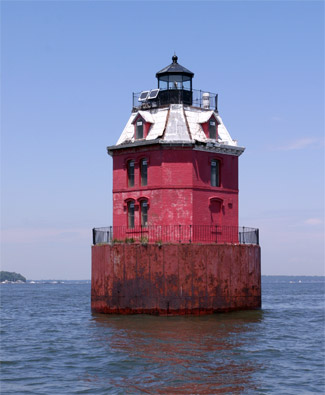 The predecessor to the current Sandy Point Shoal Lighthouse was constructed on two acres of land on the western side of the Chesapeake Bay, near where todays suspension bridge meets the shore. Congress first appropriated $8,000 for the lighthouse on August 3, 1854, and the resulting keepers quarters with an integral tower and lantern were finished in 1858. W.J. Humes built the original structure, which boasted four rooms, a cellar, and an attached kitchen. The brick quarters measured 31.5 by 18.5 feet, while the iron lantern tower, painted red, exhibited a flashing white light at a height of fifty feet above the bay. In 1863, a fog bell rung by machinery was added to the station to work in concert with the lighthouses fifth-order Fresnel lens.

Before long, the Lighthouse Board determined this setup was completely inadequate to service the increasingly heavy volume of passenger steamers destined for the port of Baltimore. In 1874, the Board wrote:

Sandy Point light is located on the main-land, from which place continuous shoals make out into the bay, a distance of about one mile, and vessels drawing more than ten feet of water cannot approach within that distance of the light-house. A fog-bell is established at this station, but, on account of its distance from the channel, can seldom be heard. The defects of its location are especially felt during stormy weather in winter. Nearly all the passenger-steamers running into the port of Baltimore from below, of which there are many, change their course at this point, and this becomes a hazardous undertaking to boats crowded with passengers and running on time, when neither the light can be seen nor the fog-bell heard. A change in the location of the light to the outer edge of the shoal and the establishment of an efficient fog signal are recommended, and an appropriation of $40,000 asked for this purpose.

The request was repeated annually for nearly a decade before Congress finally allocated $25,000 for the new lighthouse on August 7, 1882. The Board insisted that the exposed location of the shoal and the fields of moving ice called for the full $40,000 requested, but that amount was denied. Consequently, the Board decided to erect a less expensive tower than originally proposed while keeping the massive caisson foundation.

Construction using these modified plans began in August 1883, and remarkably the lighthouse was finished by October of that same year. A Lighthouse Board report offers a matter-of-fact description of the efficiency and speed with which Sandy Point was erected. On August 11, the workmen and material arrived at the site, and piles for a work platform were soon driven into the shoals bottom. By August 20, a derrick mast, concrete mixer, engine, boiler, and boom were in place atop the platform. In late August, the lower two sections of the caisson were sunk into the sand 3 feet and leveled by means of a water-jet and force pump. During the month of September, 1,000 cubic yards of concrete were mixed and deposited in the caisson, weighing it down firmly into the sand. Construction of the brick lighthouse commenced on September 27, and on October 11, the structure was crowned with its lantern room. Though ready for exhibition on October 18, the light was not shown until October 30, 1883, pending publication of an official notice to mariners.

Sandy Point Lighthouse consists of a three-story, timber-framed and masonry dwelling, measuring twenty-four feet square, but the structure has its corners truncated, which gives it an octagonal appearance. A mansard roof, interrupted by peaked dormer windows on each of its four sides, tops the dwelling. Combined with the two adjacent windows on the north and south sides of the first two floors, the dormer windows lend a Victorian elegance to the lighthouse. This effect is accentuated by ornamental exterior brickwork, as well as a bracketed wooden cornice between the first and second levels.

The towers cellar level consists of an octagonal room, set within the concrete of the caisson. This room, accessed from the first floor via a wooden ships ladder, was used to store coal, water, and oil. In the center of the room stands a masonry column, which supports a hollow iron column that lends structural integrity to the dwelling. At one time, the column housed the counter-weights for the fog bell striking mechanism. The first floor contains a seven-by-eleven-foot kitchen with a pantry, as well as a living room with a fireplace in the corner. The living room measures nine by nineteen feet, and would be used in the lighthouses later years as a radio equipment room. Three bedrooms are located on the second floor.

Continuing up the spiral staircase, one ascends to the third or watchroom level, which is split into two rooms. The walls on this level are wood framed with beaded wood paneling. The fog bell was originally hung from the east dormer on this level, but it has been removed. Moving up to the lantern room, the staircase switches from counter-clockwise to clockwise. This rooms original glass panes were set in cast-iron frames, above which rests a copper, standing seam roof lined on the inside with sheet metal. On the top of the roof there sits a ventilator ball. A half-door made of plywood grants access via the parapet wall to the lantern gallery, which is encircled by an iron balustrade. Two solar panels were ultimately bolted to the top rail of the gallery to power a modern beacon.

The fifth-order Fresnel was likely transferred from the original Sandy Point Lighthouse in October 1883, as the station retained a characteristic of a white light punctuated every ninety seconds by a flash. A red sector was inserted into the light on April 15, 1888 to cover an arc of about 159° that ran from shoals off Thomas Point to the entrance to Craighill Channel, but this created the following problem as explained in a Lighthouse Board report: After the introduction of the red sector in the flashing light at this station, it was found that when the light flashed, the edge of the red cut was much farther to the west than when it was fixed, and that consequently, the entrance to the Craighill Channel, which the red sector was established to mark, was not reliably defined. This situation was remedied by placing a Henry-Lepaute fourth-order lens in the lantern room in May 1890 to produce a fixed light.

Around the first of March 1895, Keeper John Reynolds sent his assistant ashore for medicine to relieve his rheumatism. While the assistant was absent, ice piled up around the lighthouse to a height of sixteen feet, forcing Keeper Reynolds to faithfully tend the light by himself for sixteen days, even though he would have felt a lot safer if he were on shore. A newspaper article, reporting on Reynolds rough time at the lighthouse, provided the following description of his devotion to the light: Owing to his crippled condition, the lights were regulated with difficulty, the keeper having to crawl on his hands and knees to the tower in the fourth story.

A bit of an emergency occurred in 1901, when a routine inspection discovered a dangerous scour beneath the foot of the caisson. The McClenahan Granite Company out of Port Deposit, Maryland was contracted to put down 670 cubic yards of riprap stone in order to secure the foundation. Technological alterations to the lighthouse included a change from an oil wick lighting system to incandescent oil-vapor in 1913. This, in turn, was superseded by electricity in December 1929, at which time the light characteristic was changed back to a flashing one. To provide the needed current, duplicate two-kilowatt generators were installed in the lighthouse along with storage batteries. The 150-watt bulb placed inside the lens in 1929 increased the lights candlepower from 2,900 to 5,800.

In 1909, a third-class daboll fog signal with a twelve-foot copper trumpet replaced the stations fog bell. After automation of the station in 1963, a modern fog signal sounded every thirty seconds from mid-September to the first of June.

While automation did reduce costs, the unmanned Sandy Point Lighthouse became an easy target for the senseless acts of miscreants. In mid-June 1979, waterborne vandals broke off the exterior lock, climbed the tower, destroyed all the window panes in the lantern save one, and shattered the priceless nineteenth century lens. Frustrated by the desecration of structures with tremendous navigational and historical importance, the Coast Guard called the vandalism a dangerous, costly and senseless act that endangers the lives and property of mariners who depend on these aids and offered a reward for finding the culprits. No one was ever apprehended or prosecuted.

Between 1988 and 1990, the Coast Guard made a number of repairs, including substituting the deteriorating tin cornices with historically accurate mahogany replacements. This was achieved by removing a section of the old cornices and using it to make patterns at a Coast Guard yard. Despite these efforts, there was plenty of other work that needed to be done. The lower gallery deck was badly cracked and threatened to admit water between the iron and concrete portions of the caisson. Injuries to the brick tower included crumbling bricks and mortar in need of point work, as well as missing window trim. Water damage to the interior had ruined most of the woodwork and plaster. In 1995, some of these concerns were addressed when a new copper roof was added, the lower gallery deck, rails, and landing ladder were repaired or replaced, and the lighthouse was repainted.

In 2006, the work of maintaining the lighthouse was placed into the hands of private ownership via an auction held by the governments Real Property Disposal Division. After no non-profit groups expressed interested in the lighthouse when it was offered under the National Historic Lighthouse Preservation Act in 2005, it was auctioned off on the internet where the winning bid, submitted on June 28, 2006, was $250,000. The private owner of Sandy Point Lighthouse is required to allow Coast Guard access to the structure for periodic maintenance of the light. Only time will tell if auctioning off the offshore lighthouses on the Chesapeake Bay will be successful in preserving these historic beacons.

For a larger map of Sandy Point Shoal Lighthouse, click the lighthouse in the above map.

This light is best viewed from a boat, but good views can be had from Sandy Point State Park. To reach the park, take exit 32 from Highway 50, the exit at the western end of the Chesapeake Bay Bridge, and drive north into Sandy Point Park.

Watermark Cruises out of Annapolis offers a Lighthouse Cruise that passes this lighthouse. We visited the lighthouse with Down Time Sportfishing Charters.