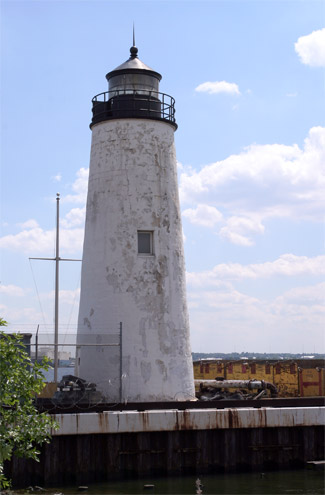 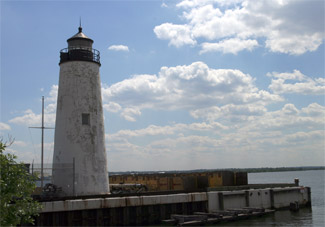 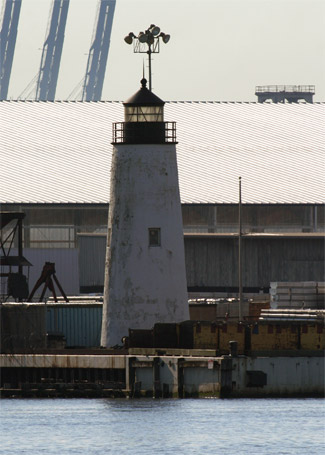 In 1801, the stretch of land in Baltimore Harbor across from Fort McHenry, known as Gorsuch Point in honor of an important settler from colonial days, became the site for a lazaretto, a word of Italian origin meaning a hospital for those with contagious diseases. With massive immigration bringing diseases into America, the hospital became well known in Baltimore, and the word lazaretto soon fell into common parlance when referring to the point. On March 3, 1831, Congress provided $2,500 for erecting a beacon light on Lazaretto Point, at the entrance of the harbor of Baltimore, or on the point of land upon which Fort McHenry is situated. Lazaretto Point was selected as the site for the light, and by the time John Donahoo was commissioned to build the lighthouse later that year, the quarantine hospital had already been shut down. The government still owned five acres of land at the site, however, so it was a natural choice for the thirty-foot tower made of whitewashed bricks and an accompanying dwelling, whose first resident was Keeper William Shaw.

In 1836, a fire destroyed the old smallpox hospital and damaged the keepers house. New living quarters for the keeper, in the form of a two-story house that measured twenty by thirty-five feet, were constructed from bricks and material salvaged from the ruins of the hospital and the original keepers dwelling.

There are a couple of interesting tales linking Edgar Allen Poe to Lazaretto Lighthouse. One is that his unfinished short story, entitled simply The Lighthouse, was inspired by the Lazaretto structure. Another is that shortly after the completion of the lighthouse, Poe took out an ad in the local paper making the very dramatic claim that a man would fly from the Shot Tower, which at that time was the tallest building in America, to Lazaretto Lighthouse. A crowd gathered in giddy anticipation on April 1, and it wasnt until after a long wait that they finally realized they had fallen for an April Fools Day prank.

After having faithfully served for nearly five years, Keeper William Shaw was dismissed in April 1841 after William Henry Harrison was elected President and the controlling political party changed from Democrat to Whig. Keeper Shaw was the father of eleven children and was making an annual salary of $350 at the time. Just three months after he was dismissed, a newspaper reported that Keeper Shaw had been restored to his post after the indignant rebuke of the people had shamed the Whig power.

The conical Lazaretto Point Lighthouse, built at a cost of $2,100, originally employed eleven oil lamps with fifteen-inch spherical reflectors to generate its light. This arrangement was expensive, as it consumed 450 gallons of oil every year, and was part of the motivation for the Lighthouse Board installing a Fresnel lens in the lighthouse on June 14, 1855. Frenchman Augustin Fresnel had invented the lens, which is an ingenious arrangement of prisms that is both beautiful and practical, in 1822, but the United States was slow in adopting the technology. Using a Fresnel lens and only one lamp strongly enhanced the beam emanating from Lazaretto Lighthouse. The Board initially chose a fourth-order lens for the lighthouse, though in 1914 this was upgraded to a third-and-a-half-order.

The year 1863 saw two significant developments at the station. First, a large quantity of iron ore was found beneath the lighthouse property, prompting a local company to mine it for the next five years. The Lighthouse Board was paid $5,662 for the mining rights, but had to call off the project and demand that the holes be filled in when the digging threatened the keepers property. The second change in 1863 was the establishment of a depot next to the lighthouse to serve as a storehouse for resupplying numerous other Chesapeake Bay lighthouses. The advantages expected from the establishment of the depot were initially not enjoyed to the full extent anticipated, as military authorities appropriated most of the facility to serve as a munitions depot for Union forces embroiled in the Civil War. After the cessation of hostilities, the depot at Lazaretto Point often served as a site for the prefabrication of screwpile lighthouses and the assembly of caisson foundations before they were towed offshore.

A frame fog-bell tower was erected between the lighthouse and the Patapsco River in late 1869, and on January 1, 1870, the bell was commissioned as a navigational aid, being struck once every ten seconds when conditions merited. On the same date, Lazaretto Point Light was changed from white to red, so it could be distinguished from the lights of the nearby factories, which included iron furnaces and a rolling mill.

The adjacent industry created additional problems for the station as noted in the Lighthouse Boards report for 1883 that records that the gasses from the numerous chemical works in the immediate vicinity destroyed the paint, and even the whitewash, soon after it was put on the stations structures. Nearby buildings were also starting to obscure the stations light, prompting the Lighthouse Board to erect a seventy-foot-tall mast topped by a light to serve mariners in addition to the lighthouse. The mast light was discontinued on December 10, 1888, after just over five years of use, and the characteristic of Lazaretto Point Light was changed at this time from fixed red to a red flash every five seconds.

In 1892, a nine-by-twelve-foot iron oil house, capable of storing 450 five-gallon cans, was erected on the station grounds, and a summer kitchen was built.

A newspaper in 1908 published the following information on the stations assistant keeper:

Like the towering pines that fringe the North Carolina coast, upon which he was born, in sight of dreaded Hatteras, Fabius Evans Simpson, the assistant keeper of Lazaretto lighthouse, at the entrance to Baltimore harbor can lay claim to be the tallest light house keeper in the fifth lighthouse district. If not level with the tallest in the service from Maine to the Rio Grande says the Baltimore Sun.

He is only 23 years old and is built on the concertina plan. When he rises from a sitting posture one wonders how much more remains to be unfolded before he is straightened out. He is 6 feet 6 inches in his stocking feet.

His parents were reared alongside the sea and he comes of a family that has figured in the annals of the lighthouse service. Alpheus W. Simpson, father of the young man was keeper on North River light station and his uncle, Fabius Evans Simpson, was in charge of the exhibit of the lighthouse board at the Jamestown exposition. Another uncle, A. J. Simpson, is keeper of Southwest point light, all in North Carolina. Young Simpson says he will stick to the business, believing he has inherited an ambition for the service in which his family has figured for many years.

Lazaretto Lighthouse was the first on the Chesapeake to receive electricity in 1914, but this was due more to its proximity to power generators than its utility as a navigational beacon. In 1926, the tower was demolished and replaced by a thirty-nine-foot steel skeleton tower with a brighter light. This structure was positioned about 100 yards closer to the water, so that it would not be so detrimentally affected by the surrounding industrial buildings. Henry C. Wingate, the last keeper of the light, retired when the brick lighthouse was torn down.

Work at the Lazaretto depot slowed considerably as more and more lights were automated and much of the remaining duties were transferred to the Portsmouth depot. The Coast Guard eventually concluded that even the taller skeleton tower at the Lazaretto depot was not very useful, and it was torn down in 1954. Four years later, the depot followed suit; it was shut down, and the property was sold and converted into a shipping terminal.

Although the original Lazaretto Lighthouse disappeared years ago, a replica was built thanks to the wishes of a noted historian and Baltimore waterfront enthusiast, Norman Rukert, Sr. Since 1921, the Rukert family has owned Rukert Terminals Corporation, a Baltimore firm that offloads, warehouses, and distributes cargo. Norman Rukert thought that recreating the lighthouse would be a fantastic way to help preserve history. In August 1985, just over one year after Rukert had passed away, his family built the replica in his honor. According to George Nixon, Normans nephew and president of the company, original blueprints were obtained from the National Archives so that an accurate replica could be made. The lighthouse, which was constructed on the companys property, is believed to be located in the general proximity of where the original tower stood.

While the reproduction does possess a light, the structure is not an active aid to navigation. Nixon, however, believes that the tower at the edge of the landing of the Lehigh Cement Corporation is important for other reasons. Baltimores become so popular as a destination, especially for the cruising setyou could say [the lighthouse] is our contribution to the continuing emergence of Baltimore.

Located on the grounds of the Lehigh Cement Company near the eastern end of the Interstate 95 bridge over the Patapsco River.
Latitude: 39.2622, Longitude: -76.57155

For a larger map of Lazaretto Point (Replica) Lighthouse, click the lighthouse in the above map.

It is possible to drive right up to the light, or you can view the light from Fort McHenry across the Patapsco River. To view the light up close, from Interstate 95 on the east bank of the Patapsco River, take exit 56 and go west on Keith Avenue to Mertens Avenue. The Lehigh Cement Company is located just a short ways down Mertens Avenue. There are now No Trespassing signs posted at the site, so you will have to ask permission to get close to the light.

The lighthouse is owned by Rukert Terminals Corporation. Grounds/tower closed.