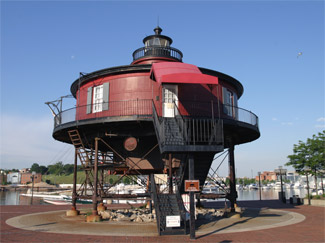 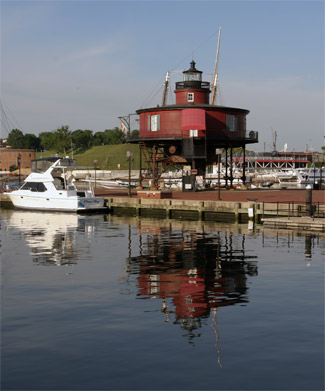 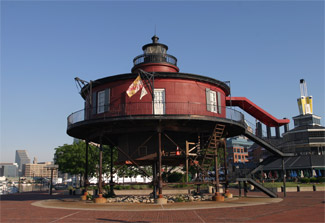 Marylands first two lighthouses were built to mark the confluence of Chesapeake Bay and the Patapsco River, which led upstream to the important port of Baltimore. Bodkin Island Lighthouse, constructed in 1822, was placed at the southern side of the river entrance, and North Point Lighthouse was erected at the northern side of the entrance in 1824.

The first screwpile lighthouse built in the United States was completed in 1850 at Brandywine Shoal in Delaware Bay, and this deployment triggered the use of this style of lighthouse elsewhere in the country. On March 3, 1851, Congress appropriated $17,000 for a lighthouse to be erected on Seven Foot Knoll in the mouth of the Patapsco River to replace Bodkin Island Lighthouse. At this time, control of the countrys lighthouses was passing from Stephen Pleasonton, Fifth Auditor of the Treasury, to the newly formed Lighthouse Board, and this board recommended that a screwpile lighthouse built on the same principle as that erected at the Brandywine shoal be adopted for Seven Foot Knoll.

I.W.P. Lewis submitted a plan for a lighthouse similar to that used at Brandywine except that it had a broader foundation and its two stories, instead of three, were built of wood with an iron framework rather than entirely out of iron. The Board rejected the plan, believing that only a permanent light, presumably built of just iron, should be erected in a position of such importance.

A contract for the erection of an iron screwpile lighthouse at Seven Foot Knoll was signed before the formal establishment of the Lighthouse Board in 1852, but this contract expired after the contractors for the project had difficulties obtaining a proper foundation for the structure. Funds totaling just over $34,000 were reappropriated on August 3, 1854, and work on the screwpile lighthouse resumed.

Seven Foot Knoll Lighthouse was one of the first projects to enjoy the full benefits of prefabricated parts. This allowed pieces like walls and beams, which were fabricated by the Baltimore iron foundry of Murray and Hazelhurst, to be transported out to the site and quickly assembled. When completed in 1855, Seven Foot Knoll Lighthouse consisted of a one-story, circular, iron dwelling, with a diameter of forty feet, which rested atop nine iron screwpiles, a central pile and eight others placed at the angles of an octagon. A fourth-order Fresnel lens was installed in the lighthouses circular lantern room to produce a fixed white light at a focal plane of forty-four feet above the water, and a 500-pound fog bell was struck by machinery during times of limited visibility.

The lighthouse was initially painted black with white shutters, and its light was exhibited for the first time on January 10, 1856. A gallery deck, originally covered by a veranda, encircled the lighthouse and was bordered by an iron balustrade and handrail. Centered over the circular dwelling is a fifteen-foot diameter watchroom that is in turn topped by the lantern room, which had a nine-foot-wide deck and featured twelve panes of glass in the shape of truncated triangles.

On January 19, 1884, ice floes broke one of the lighthouses iron piles, and five days later the lighthouse tender Holly removed the keepers from the lighthouse, as it was deemed unsafe due to the running ice from the upper Chesapeake. The Lighthouse Board reported that to guard against further damagewooden piles were driven in bunches around the light-house as a temporary expedient; 150 piles in groups of 10 each, secured by strong iron cables The groups of piles were deployed in a circle around the structure with each group being about fifty feet from the lighthouses center pile. After this stopgap measure, the broken iron pile was itself replaced, but it wasnt long before relentless natural forces caused trouble again. By 1894, all the clusters of oak piles placed around the lighthousehad disappeared, and in that year, a diver at the site found that ice pressure had again damaged the submerged foundation. After this finding, 790 cubic yards of riprap were deposited at the base of the lighthouse, to strengthen it and receive the brunt of any future attacks by the ice.

Seven Foot Knoll was not always a lonely outpost for lightkeepers, as over its 133 years of manned operation a few families made their home there. In 1936, Eva Marie Bowling, daughter of keeper James T. Bowling who served as head keeper from 1874 to 1879, recalled her early life at Seven Foot Knoll Station for a local newspaper. Eva Marie was born at the lighthouse on June 23, 1875 and was nicknamed Knollie after her birthplace. There are five large rooms, she related, and we had a piano and big bookcase with no end of books which occupied our time during the long winter evenings. Mother had been a school teacher and she taught us, because we had no way to get to and from the shore for school. Ms. Bowling went on to note some of the many chores and duties at the station that contributed to her familys survival: We had nets and lines and an abundance of seafood, which we traded with the farmers for vegetables. A hog pen and chicken yard were located on the platform below the living area to further supplement the familys diet. Strong storms occasionally swept away this makeshift barnyard, but the livestock were always rescued beforehand and temporarily housed with the family. One day a storm delayed Keeper Bowlings return to the lighthouse, forcing his wife to tend the light and ring the fog bell all night.

Different memories of a keepers life at Seven Foot Knoll Lighthouse were shared by the family of Thomas Steinhise, the lights final civilian keeper. Keeper Steinhises family did not live at the station with him, but rather saw him eight days out of the month during his shore leave. According to Steinhise, a good keeper required a multitude of skills including those of a painter, carpenter, navigator, and cook. In August 1933, Steinhise accomplished the rarest but most important of the keepers tasks, a rescue at sea. Shortly after midnight on a violently stormy night, Steinhise heard a distress whistle and lowered the stations small motorboat to investigate, braving fifteen-foot waves and ninety-mile-per-hour winds. Coming upon the stranded crewmembers of the sinking tugboat Point Breeze, Steinhise was able to pull six of the tugs fourteen-man crew aboard, one of whom was dead, and transport them to the lighthouse. The rest of the crew was rescued by another tug and taken ashore. Steinhises granddaughter Bernadette reported that the engine in her fathers launch was faulty, which really made him a deserving recipient of the silver lifesaving medal that he was awarded.

The days of a keeper at Seven Foot Knoll Lighthouse ended in 1948, when the light was automated. This was welcome news for George E. McCabe, captain of the port. In an interview with The Baltimore Sun, he pointed out that keepers are hard to get. Young people no longer want to live in lighthouses. And the oldtimers, who have been at it for years, are disappearing one by one. McCabe related how even coastguardsmen eschewed lighthouse duty, pretending to be sick or plagued by boat trouble.

The lack of a resident keeper was not good news for Seven Foot Knoll Lighthouse, as it began to quickly deteriorate and led the Coast Guard to declare it excess property in 1969. The lighthouse was donated to the Mariners Museum in Newport News, but a year later, the contractor hired to maintain the structure went bankrupt, and the museum gave up its claims to the lighthouse in 1975.

One of only two screwpile lighthouse on the Chesapeake remaining in its original location, Seven Foot Knoll Lighthouse reverted to the Coast Guard, and an 1982 inspection concluded that due to iron legs in less than ideal condition, the lighthouse would ultimately just fall into the bay. A Coast Guard Lieutenant aboard the Cutter Sledge in 1982 described the lighthouses condition as grim, and reported that the foundation was so badly damaged that it justified demolition of the light. The structure was covered by graffiti, but its lantern and light were undamaged.

Seven Foot Knoll Lighthouse may have faced demolition had not the City of Baltimore stepped in and hired Empire Construction to move to it to Pier 5 as part of a redevelopment plan for the harbor. Amid churning river waters and gusty winds, the move was undertaken in October 1988. It took some time to sever the lighthouse from its iron pilings, as the cutting torches held by cold-weather divers were frequently extinguished by the wind and spray. Finally, the 200-ton lighthouse was lifted from its foundation by The Samson, a massive crane, and barged up the Patapsco River to its new home in Baltimores Inner Harbor.

The move cost $600,000, and additional funds were expended for the lighthouses restoration, which took about a year and was aided by descendants of Keeper Steinhise. The lighthouses first level, which previously contained two bedrooms, a living room, and a kitchen, now houses historical exhibits for thousands of annual visitors. In 1997, Seven Foot Knoll Lighthouse became part of the Baltimore Maritime Museum, which also includes the submarine USS Torsk, the Lightship Chesapeake, and the Coast Guard cutter Taney. A modern light warns mariners of Seven Foot Knoll today.

For a larger map of Seven Foot Knoll Lighthouse, click the lighthouse in the above map.

From Interstate 95, take exit 53, marked Downtown I-395 N. Take the left fork (downtown) and stay in the center lane, which will become Howard Street. Continue straight as you pass the baseball and football stadiums on your left. Turn right on Pratt Street, the third traffic light, and the lighthouse will be on your right after nine blocks or so. Several pay parking facilities can be found in the area.

The lighthouse is owned by the City of Baltimore and is managed by the Baltimore Maritime Museum. Grounds/dwelling open.