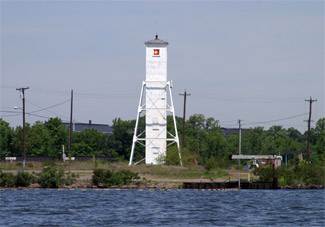 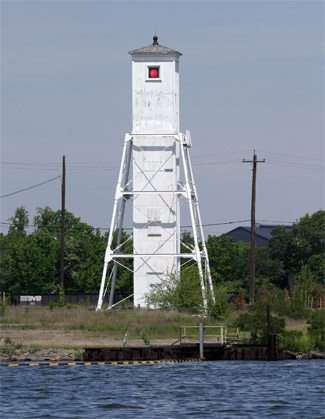 Nearly a decade after the completion of the Lower Craighill Channel Range Lights, the Lighthouse Board received funding in 1885 for the construction of another set of range lights to aid navigators approaching Baltimore Harbor. These lights were to be associated with a new cutoff that connected the Brewerton and Craighill Channels, shortening the route into Baltimore by several miles. Despite being designated the upper range lights, the rear range light of the upper set is actually located farther south than the rear light of the lower range. The naming convention, however, was undoubtedly used because ships enter Craighill Channel from the south, using the lights of the lower range to direct them, and the upper range lights are not utilized until ships approach the Patapsco River. Notably, these lights are significantly smaller than the previously constructed set and possess little of the others glamour.

Unlike the construction of the Lower Craighill Channel Range Lights, the erection of the lights for the Cutoff Channel was relatively problem-free and did not require any additional funding over the original $25,000 appropriation. The front range light consists of a twenty-five-foot-tall octagonal brick tower built on the thirty-foot-square, stone foundation pier of the former rear light of the North Point Range, originally constructed in 1822. While some thought was actually given to refurbishing the structure at that location that was abandoned with the establishment of the Lower Craighill Channel Range Lights, the Lighthouse Board reported that careful examination showed it to be entirely unsuitable for the purpose, and it was deemed more practical to tear it down and build a more secure structure. The front light is located roughly 1.3 miles southeast of the rear light, near the mouth of the Patapsco River.

As described by the Lighthouse Board, The rear beacon consists of an inner wooden shaft, covered with corrugated iron and supported by an iron skeleton frame, forming a frustum of a square pyramid, resting on stone and brick foundation piers. The central shaft encloses a stairway that facilitated access to a gallery and the light at the top of the tower. The rear light is positioned sixty-five feet above the water and forty feet above the front range light.

Construction of the range lights and associated keepers dwellings was carried out in parallel, allowing the work to be completed and in operation in less than six months. Work began in September 1885, after the justice department approved the deed for the site of the rear light, and on January 15, 1886, the lights were shown for the first time, though some work was still needed on the keepers dwellings. The following spring, the land around the six-room keepers dwellings was drained, graded, and fenced in, and brick cisterns were built. The keepers dwelling for the rear light was located near the rear tower, while the dwelling for the front light was located near the end of the 350-foot-long bridge that connected the front light to the shore.

In its annual report of 1888, the Lighthouse Board noted that the gates to the property at the front light had to be relocated as the owner of the adjoining property had declined to allow the keeper to pass over his property any longer. Access to the rear tower is even more complicated today as it is located within the grounds of the Sparrows Point Bethlehem Steel Plant.

In 1890, extensive work was done on the dwelling for the front light. The interior was painted, roof repairs were made, and a new picket fence and brick walkways were added, and seventeen window screens and two screen doors were hung. Unfortunately, just three years later, the wooden bridge that connected the mainland to the front light was destroyed in a storm. Rather than rebuild the bridge, the locomotive headlight was moved outside the tower, and the small structure was remodeled to serve as quarters for a keeper. The front light does somewhat resemble a guard shack, and the twelve-foot square tower with truncated corners, now had a resident guardian. A boat landing and davits for storing the keepers boat were added to the front light at this time.

Oil lights set in locomotive headlight reflectors were used in the range to produce a pair of white lights until 1914, when acetylene lights were installed in the towers and the characteristic was changed to flashing white. The front range light was electrified in November 1929 with current being obtained from the lighting system at Fort Howard through a 650-foot-long submarine cable, and at this time the signature of the range lights was changed to fixed red.

Its seems the front range light was automated in 1914 with the installation of the acetylene light, as after that Frederick Burmeister, its keeper, was listed as a custodian of the light, receiving an annual salary of just one dollar. The rear light retained its keeper a while longer, for the first year it was officially listed as unmanned was in 1933.

The Cutoff Channel Range Lights are a prime example of governmental efforts to produce more efficient aids to navigation. The front range light, with its striking red and white bands and molded brick arches is quite pleasing architecturally. Although the rear range light has lost its gallery that encircled the tower atop the four iron supports and its windows have been boarded up, the tower is a one-of-a-kind.

For a larger map of Craighill Channel Upper Rear Lighthouse, click the lighthouse in the above map.

The light is best seen from the water, as access to the tower is restricted by a steel mill. We visited the lighthouse with Down Time Sportfishing Charters, and trips past the lighthouse are also available from Chesapeake Lights.