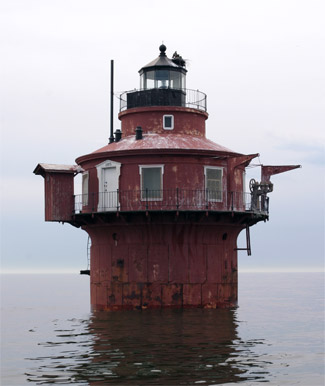 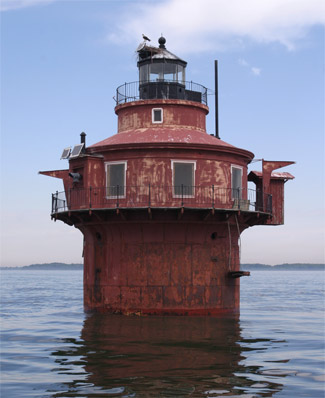 Craighill Channel, so named for William Price Craighill, a key figure on the Lighthouse Board who supervised the engineering surveys of the channel, forms the first leg of the maintained channel from Chesapeake Bay to the Patapsco River and leads from the mouth of the Magothy River to Seven Foot Knoll and the Brewerton Channel. The rising importance of Baltimore as a port persuaded Congress to set aside $50,000 in 1870 to widen Craighill Channel to 500 feet and deepen it to 22 feet. Without range lights, the channel was unusable at night, and the Lighthouse Board moved to remedy this situation in 1871 writing, this channel has the advantage of saving about five miles in distance to large vessels bound to Baltimore from the lower bay; avoids much, if not all, of the dangers usually experienced from the accumulation of ice in the lower part of the Brewerton Channel during the winter; is much easier navigated, or would be if range beacons were established. While eventually two sets of range lights would be constructed along the channel, totaling four lighthouses in all and forming an upper and lower range, the original plans called only for the lower range lights. Due to the location of the Craighill Channel, it would have been problematic to construct range lights onshore and so the decision was made to build them on the bay. The original design called for standard screwpile foundations for both of the range lighthouses, however, before construction could begin, potentially dangerous ice conditions at the site of the front range were observed over the winter of 1872-73. This hazard prompted the Lighthouse to alter their plans and construct a small caisson structure for the front range and a granite pier foundation for the rear range using $45,000 that Congress had appropriated on June 10, 1872 .

While the construction of the lower front range was eventually a success, the process was more complicated than originally anticipated. When work began at the selected site, it was discovered that a solid foundation did not exist within sixty feet of the surface of the water. As a result, an additional appropriation of $25,000 had to be requested. To achieve an effective foundation for the lighthouse, ten feet of mud was removed from the channel floor, and that was just the beginning.

Following the extensive dredging at the site, wooden piles were driven deep into the seabed and then sawed off at a depth of twenty-four feet below the surface of the water. This process required the use of a novel technique, wherein a steam-operated circular saw was used underwater to cut off the tops of the piles to the required height. This circular saw was attached to a hollow wrought-iron shaft which was held in a vertical position in a frame. As might be expected, attempting to make blind cuts at predetermined lengths underwater was not a flawless procedure, but eventually a level foundation was established by having a diver spike blocks of hardwood to some of the piles.

A caisson crib, built of hardwood and composed of four layers of one-foot-thick sections of timber, was assembled at Havre de Grace, and to this was bolted the first course of the cast-iron cylinder, which was thirty feet in diameter. The first attempt to place the caisson atop the piles in October 1873 was unsuccessful, however, by the end of the month, the addition of two more courses of the cylinder and ballast allowed the caisson to be successfully set in position. The iron tube was then filled with concrete, and 5,000 tons of broken stone were deposited around it during the month of November.

Of course, the purpose of any lighthouse construction is to provide a platform for a light. Thus, within three weeks of finishing the caisson foundation at the front range, a fourth-order Fresnel lens was installed on a make-shift wooden structure that served as temporary housing for the keepers. The keepers were forced to live in the makeshift accommodations until additional funding was obtained and the lighthouse was finally completed in early 1875. Congress provided $20,000 on March 3, 1873 and $45,000 on June 23, 1874 to complete the range lights, bringing the total cost of the two structures to $110,000.

A cylindrical, one-story dwelling was placed atop the caisson foundation of the front range light in October 1874. The interior consisted of a kitchen, sitting room, and two bedrooms, while a privy was cantilevered from the gallery encircling the dwelling. The numerals 1873, the year the light was first exhibited, is centered above the entrance door on the north side of the lighthouse. In the top portion of the tubular foundation, two 750-gallon iron tanks were housed to store rainwater collected from the roof of the lighthouse. A wooden, circular stairway leads from the dwelling space to the smaller cylindrical watchroom, which is surmounted by the ten-sided lantern room.

On March 22, 1911, Keeper Henry Wingate and Assistant Keeper James L. Lewis risked their own lives to rescue two exhausted men, whose small vessel had capsized near the front light in a severe gale. The lighthouse inspector arrived at the station two days after the rescue and later sent the following report to the Commissioner of Lighthouses along with a recommendation that both keepers be commended for their actions:

The keepers with great difficulty, and at great risk, succeeded in getting a boat away from the lighthouse and brought off two men from the capsized vessel. They worked over them and succeeded in resuscitating one, but the other  a negro about 18 years of age  died about forty minutes after reaching the lighthouse. The man that recovered was resuscitated with great difficulty, and would not have lived long had he not been saved at the time.

Another example of the documented rescues performed by the keepers of Craighill Channel Front Range Lighthouse is one that occurred on the morning of September 13, 1926, when Keeper Jorgen Johansen pulled four people from the waters near the station. Those rescued had been in the water since the prior evening and were greatly exhausted. Keeper Johansen took them to the lighthouse and cared for them until arrangements could be made to have them taken to shore.

The front range light was struck by an errant vessel on at least one occasion. On January 19, 1916, two barges being towed by the tug I.H. Kiehl struck the lighthouse and caused $230 in damages. The owners of the tug were asked to pay for repairs.

The front range light was electrified in November 1929 through the installation of a pair of 2,000-watt, gasoline-drive generators and an array of storage batteries. A 94-watt lamp was installed in the range lens to produce a light with 90,000 candlepower, and a 150-watt lamp was placed in the fifth-order lens atop the tower to produce a light with 4,400 candlepower. Electrification of the lighthouse allowed an electric blower siren to replace the weight-driven bell striker as the stations fog signal. The generators were run for three or four hours starting at sundown to charge the batteries and during periods of fog. At other times, the lights ran off the batteries.

Remarkably, Craighill Channel Lower Front Range Lighthouse has never suffered ice damage despite its exposed location. The station was abandoned on February 11, 1936 due to dangerous ice conditions, but the keepers were able to return and reactivate the lights on February 24.

When the lighthouse was automated in May 1964, it was one of the last lighthouses on Chesapeake Bay to lose its Coast Guard personnel. The exterior of the lighthouse has received regular attention, and is thus in fair condition. The interior, however, was open to the elements and became a residence for nesting birds. An osprey nest also frequently adorns the top of the lighthouse.

During the fall of 2002, two non-profit organizations applied to take ownership and become stewards of this historic lighthouse under the provisions of the National Historic Lighthouse Preservation Act of 2000. Historical Place Preservation, Inc. was awarded a letter of recommendation by the Secretary of the Department of the Interior in July 2005 and received the keys and title to the lighthouse the following November. The organization established a website devoted to Craighill Channel Lower Front Lighthouse, but plans to restore the lighthouse and open it to the public were never realized. The organization eventually stopped replying to requests for information on the status of the lighthouse, prompting the government to take back control of the structure.

In July 2017, the General Services Administration initiated an auction for the lighthouse with a soft closing date of September 15, 2017. Fourteen bidders particiated in the auction, which ended on September 20, 2017 with a high bid of $96,000.

For a larger map of Craighill Channel Lower Front Lighthouse, click the lighthouse in the above map.

The light is best viewed from the water, but a distant view is possible from North Point State Park. We visited the lighthouse with Down Time Sportfishing Charters.