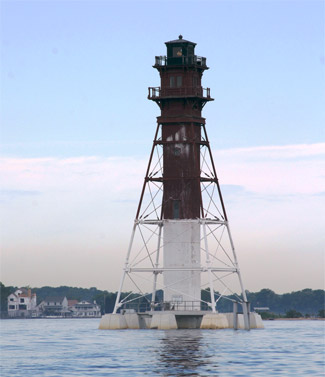 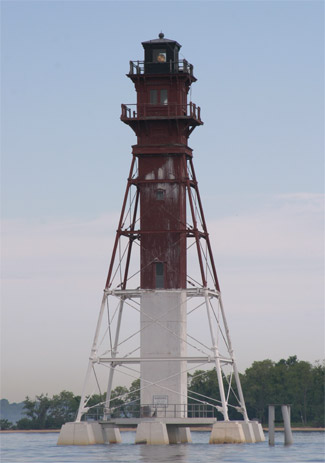 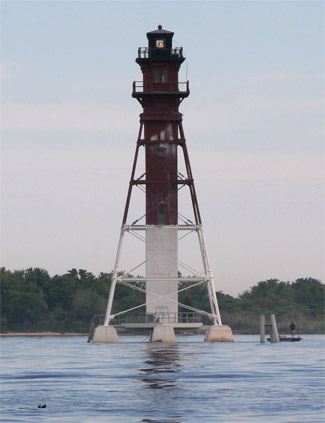 Craighill Channel, so named for William Price Craighill, a key figure on the Lighthouse Board who supervised the engineering surveys of the channel, forms the first leg of the maintained channel from Chesapeake Bay to the Patapsco River and leads from the mouth of the Magothy River to Seven Foot Knoll and the Brewerton Channel. The rising importance of Baltimore as a port persuaded Congress to set aside $50,000 in 1870 to widen Craighill Channel to 500 feet and deepen it to 22 feet. Without range lights, the channel was unusable at night, and the Lighthouse Board moved to remedy this situation in 1871 writing, this channel has the advantage of saving about five miles in distance to large vessels bound to Baltimore from the lower bay; avoids much, if not all, of the dangers usually experienced from the accumulation of ice in the lower part of the Brewerton Channel during the winter; is much easier navigated, or would be if range beacons were established. While eventually two sets of range lights would be constructed along the channel, totaling four lighthouses in all and forming an upper and lower range, the original plans called only for the lower range lights.

Due to the location of the Craighill Channel, it would have been problematic to construct range lights onshore and so the decision was made to build them on the bay. The original design called for standard screwpile foundations for both of the range lighthouses, however, before construction could begin, potentially dangerous ice conditions at the site of the front range were observed over the winter of 1872-73. This hazard prompted the Lighthouse to alter their plans and construct a small caisson structure for the front range and a granite pier foundation for the rear range using $45,000 that Congress had appropriated on June 10, 1872.

The precise location of the rear light took careful planning to ensure the necessary alignment with the front range light, which was positioned 2.4 miles to the south. Once the location was determined, a sampling of the substratum was taken as noted in the Annual Report of the Lighthouse Board. A careful examination showed that the soil was firm, hard sand, to a depth of two feet. Below this was a thick layer of sand and mud, mixed with stones, then soft mud to a depth of fifteen feet. Based on these findings, a pile and grillage foundation was designed to support the piers on which the dwelling and the columns of the frame-work tower would rest.

In April 1873, a sixty-foot-square cofferdam was built around the site in two feet of water, and the interior was then pumped dry. Foundation piles were driven into the muddy bottom, cut off evenly, and topped with a grillage of timbers. Atop this foundation, nine piers, arranged in three rows of three, were constructed of Port Deposit granite to support the lighthouse.

Due to the expense of the foundations at both the front and rear locations, the initial funding was depleted before much work on the actual superstructures had started. A temporary light was established atop the granite piers of the rear range light on November 20, 1873, and the associated keeper lived ashore in the quarters used by the construction crew. The keeper of the light was forced to live in makeshift accommodations until additional funding was obtained, and the lighthouse was finally completed in early 1875. Congress provided $20,000 on March 3, 1873 and $45,000 on June 23, 1874 to finish the range lights, bringing the total cost of the two structures to $110,000.

The lighthouse constructed atop the granite piers resembled a four-sided pyramid, with the residence located inside the base of the framework. The keepers house was a one-and-a-half-story, wooden structure built in a Victorian style with dormer windows. An enclosed square, wooden, stairway extended from the residence to the elevated service room, watchroom, and finally the lantern room. A cantilevered deck surrounded both the watchroom and lantern room, and a small heating stove was located in the watchroom. The towers exoskeleton was made of cast iron, while the interior portion was made of wood.

Craighill Channel Lower Rear Lighthouse measures 105 feet tall, making it the tallest light in Maryland and one of the tallest on Chesapeake Bay. A fourth-order Henry-Lepaute Fresnel range lens installed in the lantern room produced a fixed white light, and the lighthouse itself was described in 1884 as an open-frame pyramid of four sides with its lower portion straw-color, its upper part brown, and its lantern red.

According to historical records, extensive repairs, necessitated by the decay of nearly all of the towers wooden braces, were made to the structure in 1884. Metal beam braces replaced the wooden ones, and during this work, new boat davits were installed and the entire tower was painted. On August 21, 1888, a cyclone tore away the dwellings roof, its copper smokestack, and portions of the covering of the stairway shaft, but all of the damage was quickly repaired over the next two months.

In 1888, Nicholas S. Hill, an owner of land on Millers Island near the lighthouse, sued the federal government for unauthorized occupation of the lighthouse site, which the owner claimed under the laws of riparian rights. A district court ruled against the owner, stating that the government had the absolute right to erect and maintain a light-house wherever it was necessary, on any submerged land in navigable waters.

The rear light was converted to acetylene and automated in 1923, and the keepers dwelling was then reportedly rented out until it was dismantled in 1938. The wooden stairway is believed to have been covered with its corrugated metal sheets when the dwelling was torn down.

The rear light was electrified in April 1929, at which time a submarine cable was used to connect the tower to commercial electricity. A 94-watt railway headlight bulb was placed inside the fourth-order range lens, increasing the candlepower from 20,000 to 140,000, which was important as the rear tower is situated roughly ten miles from the entrance to Craighill Channel.

A Coast Guard engineering survey of the rear tower made on April 20, 1994 reported that the wooden portion of the tower will rapidly become a serious safety hazard to service personnel and recommend the Coast Guard shouldnt spend any more money trying to maintain it. Instead, the engineer advised that the wooden stairway should be demolished and replaced with a device to lower the light for required service. To date, the central column of the tower remains intact, and the tower has been determined eligible for the National Register of Historic Places, which may protect the tower from any alterations.

On August 11, 2010, Coast Guard personnel removed the historic Fresnel lens from the rear lighthouse, after stabilizing each of its prisms with archival tape. Portions of the lens annular rings are missing, and the original central bulls-eye has been replaced by a Pyrex version. Once the lens was removed from its pedestal, it was carried down a staircase to the service room, where it was packed in a crate before being lowered by rope down the towers central shaft. A sixteen-foot Coast Guard boat transported the lens to shore, and a government van carried the artifact to the Coast Guard Exhibit Center for storage.

For a larger map of Craighill Channel Lower Rear Lighthouse, click the lighthouse in the above map.

This light is best viewed from the water, but it can be seen from areas in Ramona Beach. We visited the lighthouse with Down Time Sportfishing Charters.

To see the tower from land, if you are traveling south on I-695 take Exit 42 and go south. Just past the interstate, you need to go left on Bethlehem Boulevard to reach North Point Road. If you are traveling north on I-695, take Exit 43 and follow Bethlehem Boulevard to North Point Road. From North Point Road, turn left onto Millers Island Road after 1.6 miles. After another 1.3 miles, turn right on Baylight Avenue and then left on Chesapeake Avenue from where you can see Craighill Channel Lower Rear Range Light.