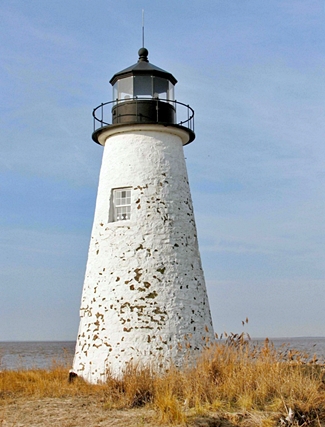 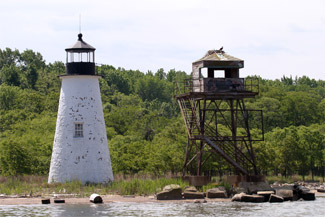 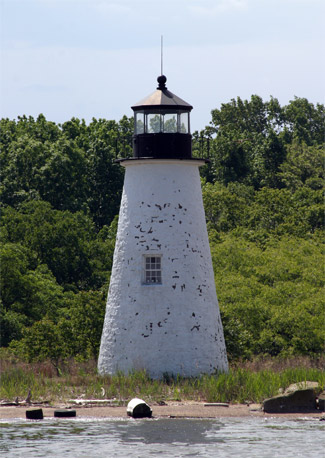 Pooles Island is situated in the northwest portion of the upper Chesapeake, near the mouths of the Gunpowder and Bush rivers. The adventurous Captain John Smith actually named the island Powells Island after Nathaniel Powell, one of his crew, but over time the name has evolved to Pooles Island, most likely due to the spring-fed pools of water found on the island.

At the time of the Revolutionary War, noted agriculturist John Bordley owned Pooles Island and used it as a base for sending supplies to General Washingtons army. The Baltimore Sun lauded the isle around that time, noting that its numerous wells of clear sparkling water had a pH that was uniquely soft for the area and very likely a factor in the prolific growth of crops and fruits on the island.

Peregrine Wethered purchased the 280-acre, narrow island in 1808 and ran it as a slave plantation whose produce evoked the wonder and admiration of the farmers all along the bay. While the island was plundered by British soldiers during the War of 1812, it quickly returned to profitability. The soil quality was exceptional to say the least, and much like the water, the dirt was said to be quite distinctive from soil found in nearby counties. Early pioneers in the region noted that while chestnuts and pine trees were found in large numbers on the mainland, these plants were completely absent from Pooles Island.

George Merrett purchased the island from Wethereds son in 1872 and planted 2,700 peach trees. Ten years later, a farmer from Ohio acquired the island from Merrett, claiming that he had found a piece of Iowa soil in Maryland. This farmer added more trees to the peach orchards and christened one of his varieties Pools Island Best. The trees on the island grew to a size practically unheard of in other orchards, and a late nineteenth century article pointed out that the islands abundant crops were produced without the aid of fertilizers.

The fruitful isle was first marked for a lighthouse in 1824, when Congress appropriated $5,000 for a beacon on the northwest tip of the island. The government purchased a parcel of land from Peregrine Wethered for $500 on March 25, 1825, and John Donahoo was contracted the following month to construct what would be the second of twelve lighthouses he would build on Chesapeake Bay between 1824 and 1853. A conical tower standing forty feet, six inches, the lighthouse is built from rough-hewn chunks of Port Deposit granite mortared together irregularly. The floor and foundation of the tower is made of cement, beneath which wooden pilings lend structural stability. The towers diameter is eighteen feet at its base, narrowing to nine-and-a-half feet at the top. Inside the structure, a spiral staircase made of granite blocks ascends to a landing beneath the lantern room. The current cast-iron lantern, which comprises twelve-and-a-half feet of the towers height, is cantilevered a few inches out from the mortared blocks. Thirteen lamps and an equal number of spherical reflectors were originally used to produce a fixed white light in the towers original lantern room, and stucco and whitewash were applied both to the interior and exterior of the lighthouse.

In addition to the tower, a one-and-a-half-story stone dwelling with an attached kitchen was built for the keeper. The four-room dwelling measured thirty-four by twenty feet, and a boathouse and stable were also provided for the convenience of the keeper.

Improvements to the property commenced almost immediately. On May 23, 1828 Congress earmarked $2,800 for erecting a tower and placing a bell thereon, with machinery, but an inspector in 1838 noted that the stations fog bell could not be heard more than one mile, as its hammers were too small, and the peals not sufficiently quick. In 1855, at the behest of the newly established Lighthouse Board, a fourth-order Fresnel lens took the place of the towers array of lamps and reflectors. A new lantern room was placed atop the tower in 1867, and in September 1878 a new fog bell tower was erected to replace its old and decayed predecessor. A brick cistern was added to the station in 1880.

In 1882, the keepers dwelling was upgraded by the addition of an extra story, which provided three more rooms. The Board reported that ...a new tin roof was then put on; the fencing was repaired and the lantern and fog-bell tower were painted. Five years later, a new front porch was added to the house, and a cow stable and poultry house were also built. In 1890, 486 feet of picket fencing and thirty-four feet of post-and-rail fencing were put up that, combined with the stations plank and brick walkways, made the pastoral setting extremely pleasant for the keeper. A new boathouse was added in 1892, along with a windlass to hoist up the stations boat.

Two red sectors were placed in the lantern room on April 10, 1894 to indicate turning points in the channel east of the lighthouse, and in 1897, the stations coal house was remodeled to serve as an oil house.

In 1917, the year the United States entered World War I, the light station was placed under the jurisdiction of the U.S. Army, who incorporated it into the Aberdeen Proving Ground. Due to dangerous artillery fire in the proving ground, the last keeper was removed in 1918, when the light was changed from oil to acetylene gas and the fog signal was discontinued. The beacon was decommissioned in 1939, when the property was transferred to the War Department. The lens was removed from the lantern at this time, and the keepers house was subsequently torn down. An automatic acetylene light with a CO2 fog bell was placed atop a caisson foundation near the south end of Pooles Island in November 1927 to mark the channel on the east side of the island.

Pooles Island Lighthouse is currently inaccessible to the public, due both to the islands status as a military reservation and the live artillery shells from army training exercises that litter the grounds. The islands shore is wearing away and may require a large quantity of riprap stone or bulkheads to arrest the erosion process. A nearby Army observation post, in fact, is almost in the water already.

The Army submitted a proposal to place the lighthouse on the National Register of Historic Places in 1994 and initiated plans to clean and stabilize the tower. Having been abandoned for nearly fifty years, the lighthouse was in poor condition before the massive restoration effort was finally launched by the Army in 1997. Nearly all of the stucco and paint had peeled off the towers exterior, which seemed to be crumbling in places. In addition, the lantern, gallery, roof, and balustrade were all badly in need of paint. The pedestal, which once supported the lens, had been removed from the lantern room and dumped nearby. While the lighthouse was in decent condition structurally, mortar joint cracks and fault lines needed to be repaired before they imperiled the towers integrity.

Since the island lacked pier access, an all-terrain forklift and other equipment had to be brought in on a barge equipped with a landing ramp. A 1,200-gallon water tank was used to pressure-wash the exterior before the tower was repaired and painted in 1997, the year the lighthouse made the National Register of Historic Places.

The cast-iron lantern was cleaned with wire brushes, covered with a primer designed specifically to stick to corroded metal surfaces, and then painted with a high-gloss acrylic. The prevalence of rust on the lantern room was due to organic residue from the ivy growing on the tower, as well as algae and mildew build-up. This growth also caused a dark stain to appear around the middle of the tower, which was pressure-washed with a phosphate-free detergent.

The towers three original window openings, long since bricked in, were opened up, and new six-over-six, double-hung windows were installed. Freshly mixed mortar, rendered by a cement mixer, was finally applied to the tower before it was painted. This particular mortar was unique, as it had to be strong as well as possess enough flexibility to endure the expansion and contraction of the granite under changing weather conditions.

After the mortar work had dried for two months, the entire structure was painted. Aberdeen resident Tim Hamilton generously volunteered his time for this undertaking, which was completed in a few days. Lambs-wool rollers were used to apply the necessary coats, as using a paint sprayer was impossible due to high winds.

A replica of the towers original tongue-and-groove mahogany door was installed to complete the effort, but it didnt take long for vandals to pry it open, damaging the mahogany and popping bolts out of the doors steel strapping.

After having been inactive for over seventy years, Pooles Island Lighthouse was outfitted with solar lighting in 2011 and began sending out groups of four flashes and three flashes, separated by brief periods of darkness. Major General Nick Justice, who became commander of the Aberdeen Proving Grounds in 2009, insisted on relighting the abandoned lighthouse. Lighthouses are so symbolic, almost religious in their symbolism for guiding us, Justice said. We have the oldest one on the bay. It harkened in the industrial age, and we are calling it our light to the future as we make many major shifts in our infrastructure here. (Pooles Island Lighthouse is indeed the oldest standing lighthouse in Maryland, but not the oldest on Chesapeake Bay.)

Thirty-two descendants of Stephen Cohee, the last keeper of the light and father of eight, were on hand to witness the relighting of the lighthouse. My mother used to talk about how her father bounded up the steps every night with a jug full of oil for the lanterns, said eighty-four-year-old Betty OLeary, whose mother, Gladys, was the youngest of Cohees clan. He was meticulous about the job. Whenever he had to be away, he made sure his sons knew how to do the job.

Pooles Island has benefited ecologically from the Armys stewardship. While habitat losses in the Chesapeake continue to mount, the reservation has become a beautiful wildlife sanctuary. Man is no longer able to take advantage of the islands fertile soil, but eagles, blue herons, geese, osprey, and a small herd of deer are now thriving on their island home.

For a larger map of Pooles Island Lighthouse, click the lighthouse in the above map.

This lighthouse is best viewed from the water. Trips past the lighthouse are available from Chesapeake Lights and Galloway Fishing Charters.

The lighthouse and island are owned by the U.S. Army and are part of Aberdeen Proving Ground. Grounds/tower closed.