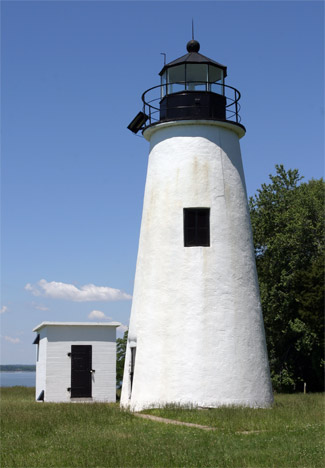 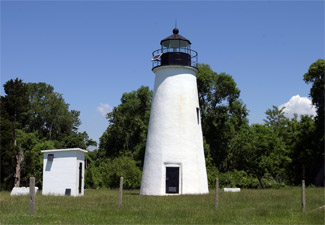 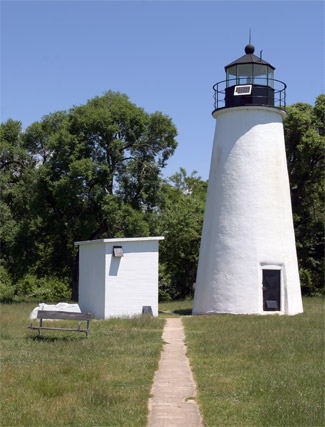 Originally built to work in concert with the lighthouses at Concord Point and Pooles Island, Turkey Point Lighthouse commenced operation in 1833 from its lofty perch atop the high bluffs at the head of Chesapeake Bay. Congress appropriated $5,000 on March 31, 1831 to enable the Secretary of the Treasury to provide, by contract, for building a light-house on or near Turkey Point, at the mouth of Elk River, and an attempt to obtain a suitable parcel on the point soon commenced. When the land owners demanded more than the government was willing to pay, the Maryland State Legislature was asked to condemn the land, and a commission set the purchase price for a four-acre tract at $564. A contract for construction of the station was awarded to John Donahoo, and he completed both the lighthouse and the squat keepers building for just $4,355. Although only thirty-five feet in stature, Turkey Point Lighthouse has a focal plane of 129 feet above mean high tide. Of all the lighthouses on Chesapeake Bay, only the tall towers at Cape Henry and Cape Charles have a higher focal plane. The bluffs at Turkey Point are visible for several miles from the Bay and have been a notable landmark since colonial days. Captain John Smith even mentioned them during his first journey into the Chesapeake during the early 1600s. When Turkey Point Lighthouse was placed in operation, it helped mark a necessary course change for mariners transitioning from Chesapeake Bay to the Elk River en route to the Chesapeake and Delaware (C&D) Canal, which linked the river to Delaware Bay in 1829.

Turkey Point Lighthouse is very similar in design to other Donahoo towers and was built using the plans from Concord Point Lighthouse. The tower is sixteen feet in diameter at its base, with walls that taper from two-and-a-half feet to fourteen-and-a-half inches as they rise. The towers nine-sided lantern room is topped with a pyramidal iron roof and ventilator ball. While many sources have claimed that the lighthouse was built with cast-iron stairs, a 1930s photograph shows wooden stairs and the blueprints for the structure at the National Archive explicitly state 31 steps. Wood.

The cast-iron lantern room is encircled by a gallery with three rows of railings supported by balusters. Originally painted red, the lanterns color was changed to black in the late 1800s. James Geddes supplied the original eleven lamps, each backed by a fifteen-inch reflector, used in the lantern room to produce a fixed white light. In the1850s, the newly empowered Lighthouse Board set about to install Fresnel lenses in all U.S. lighthouses, and Turkey Point received a fourth-order lens in 1855. The fixed white light was changed to a flashing characteristic upon automation of the station in 1947.

The keepers house when first constructed was a one-and-a-half-story brick building, but in 1889 a full second story, built of whitewashed board and sporting gingerbread eaves, was added. The bottom story consisted of a central hall with a parlor to one side and a sitting room and fireplace to the other, while three bedrooms and a small storeroom were found upstairs. A kitchen was later added to the back of the dwelling.

In April 1888, the station received a fog signal, though the stations elevated position caused some concern that the bell would not be heard by ships. For this reason, a thirty-foot-deep well was dug to house the weights of the winding mechanism, so the bell could be positioned as low to the ground as possible. The signal building itself was a one-story, eight-foot-square wooden structure that was built at the Lazaretto Depot and had at least one window.

Olga Salter Crouch, the daughter of the stations last light-keeper, recalled some of the characteristics of the bell. She says that it was located about 100 feet from the tower, and was suspended on the outside of the building and rung by a Gamewell Fire Alarm Machine...that worked like a large grandfather clock. It had a pendulum and was powered by heavy weights... The bell was struck every fifteen seconds, and the weights needed to be rewound by hand every three hours. A rope was also attached to the bell, both to salute passing ships and to sound the fog signal manually in the event of equipment failure. During World War II, the fog building was modified into a two-story watch tower, with the watchroom accessed by an exterior set of stairs. In this period of conflict there was a threat of German submarines off the Atlantic Coast, so inland shipping routes like the Chesapeake and Delaware Canal became extremely important.

Other outbuildings on the property included a stable, woodshed, and smokehouse. These were rebuilt in 1895 and were located behind the keepers dwelling. The still-standing concrete oil house was erected in 1913, and a white wooden fence encircled the light station until about 1925. Photographs taken of the station in 1938 show that it had a garage, chicken and sheep houses, a water closet, and a concrete water cistern. A daunting 137 wooden steps led down the bluffs to the water, and next to the stairs, there was a chute with a windlass, which was used by the keeper to haul supplies delivered by the lighthouse tender up to the station.

Turkey Point Lighthouse has been distinguished by a number of long-tenured female keepers. In fact, women were responsible for the light for more years than men. The first female keeper was Elizabeth Lusby, who took over for her husband Robert upon his death in 1844 and served until 1862. Rebecca L. Crouch similarly replaced her deceased husband as keeper, and her term of service lasted from 1873 to 1895. Rebeccas daughter, Georgiana S. Brumfield, moved to the station with her parents at the age of sixteen, and kept the light for twenty-four years after her mothers passing, spending a total of fifty-four years at Turkey Point.

In the early twentieth century, the well-known Fannie May Salter was installed as keeper at the personal behest of President Calvin Coolidge. The service was not going to let her assume her husbands position due to her relatively young age of forty-three, but she appealed to her senator, who took up the issue with the President. Clarence Salter, Fannies husband, was keeper of Turkey Point Lighthouse for just a couple of years when he passed away in February 1925 a few days after having been operated on for appendicitis.

Four times a night, Fannie Salter would haul a copper kettle filled with kerosene up the thirty-one stairs of the lighthouse and the iron ships ladder that led to the lantern. When combined with the labor of winding the heavy fog bell mechanism and transporting the stores from the water 137 steps below, one would think that the job took a physical toll. Salter, lauded at her retirement in 1947 as the last of the lady lighthouse keepers, had only this to say: Oh, it was an easy-like chore, but my feet got tired, and climbing the tower has given me fallen arches. Fannie Salter was once forced to manually sound the fog bell during a mechanical failure as a steamer was heading into the Elk River in foggy conditions. She rang the bell every fifteen seconds for nearly an hour until the steamer had safely passed from the river into the canal. During her absence from the dwelling while tolling the bell, she missed her son-in-laws call announcing the birth of a granddaughter.

As the lighthouse was fourteen miles from the nearest store, the keepers kept a vegetable garden and tended some livestock at the station. Of course, it just wouldn't have been right if besides sheep, chicken, and pigs, some turkeys were not kept at the station.

Following automation in 1947, the remote lighthouse was subject to vandalism. In one incident, the original wooden door to the tower was broken down and the valuable Fresnel lens was stolen. To protect the lighthouse, the rather extreme step of removing a large portion of the interior stairs had to be taken.

The keepers quarters, vandalized and neglected, were finally torn down by Marylands Parks Service in 1972. The lighthouse was decommissioned in April 2000 and subsequently leased to the non-profit Turkey Point Light Station (TPLS) Inc., which had been formed in 1995 to help care for the lighthouse. On November 30, 2002, people congregated at the lighthouse to see it reactivated as a private aid to navigation by TPLS. In 2004, the lighthouse was offered to non-profits and government agencies under the provisions of the National Historic Lighthouse Preservation Act, and two years later, the property was transferred to the State of Maryland, which then leased the lighthouse to TPLS.

TPLS has ambitious restoration plans for the station that include rebuilding the keepers dwelling. This is a painstaking process, as the Maryland Historic Trust must approve all changes, and will need significant funding. There has also been talk of restoring the lantern rooms red sector, which used to warn ships away from the shallow sandbars of the Susquehanna Flats.

Improvements made by TPLS include the construction of a new wooden staircase inside the lighthouse in 2007, and the erection of a flagpole in 2008.

For a larger map of Turkey Point Lighthouse, click the lighthouse in the above map.

From Interstate 95, take Exit 100 and travel south on Highway 272. After 2.4 miles you will cross Highway 7. Continue on Highway 272 for 11 more miles (Highway 272 will become Turkey Point Road) and enter Elk Neck State Park. At the end of the road, park and follow the trail for about a mile to the lighthouse.

The tower is open Saturday and Sunday from 10 a.m. to 4 p.m., May through October. Check with Turkey Point Light Station for further visiting information or to volunteer at the lighthouse.

The lighthouse is owned by the Maryland Department of Natural Resources and is managed by Turkey Point Light Station, Inc. Grounds open, tower open in season.


Turkey Point Lighthouse can be seen in the movie "Dead Man's Curve."