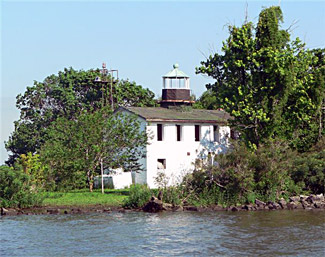 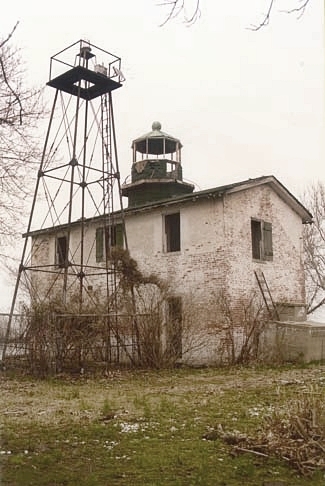 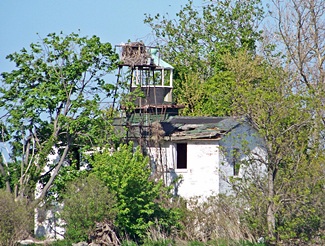 Fishing Battery is an artificial island created by Robert Gale and John Donahoo off Havre de Grace in the early 1800s to profit from the shad runs near the mouth of the Susquehanna River. Paddle boats, unable to enter the shallow port at Havre de Grace, would call at the small, man-made island, pick up a load of fish caught in nets strung out over the Susquehanna Flats, and transport the bounty to markets in Baltimore. A landing ramp, housing, and processing facilities were all crammed onto the island, which was just over an acre in size. Known first as Donahoos Battery, the island was later called Fishing Battery or Shad Battery. Congress provided $5,000 on March 3, 1851 for the construction of a lighthouse at Fishing Battery, and prolific lighthouse-builder John Donahoo was hired to build what would be the last of the dozen or so lighthouses he erected along the shores of Chesapeake Bay.

Acquisition of island property for the lighthouse is somewhat of a curiosity. Records indicate that the government paid $600 to a Mr. Otho Scott for a forty-five-foot-square parcel, but two weeks later the government paid Donahoo $10 for the same land. The lighthouse builder was the same Donahoo who built the island, but he had sold it or lost the title. As Donahoo brokered the sale, perhaps the $10 was payment for his services. In any event, the U.S. attorney general approved the purchase of the island from Mr. Scott.

The lighthouse, a one-and-a-half-story, brick dwelling with an integrated lantern room centered on its pitched roof, was built in 1853. The original light source was five lamps outfitted with fourteen-inch reflectors, but just two years later, a sixth-order Fresnel lens replaced the array of lamps and reflectors. An inspection in 1864 revealed that Fishing Batterys lantern, along with those of several other Bay lighthouses, was of an old and exceedingly defective character, and the Board decided that in the interests of commerce...steps [should] be taken to remedy the evil. A new lantern replaced the old and worn-out one in 1867, and the following year the station received a new boat, replacing one that was old and no longer fit for service.

After having leased the island since 1861, the Bureau of Fisheries purchased Fishing Battery in 1891 and made extensive improvements that included raising the grade of the island and filling around the property owned by the government for lighthouse purposes. To conform to this new grade and for sanitary reasons, the lower floor of the lighthouse was removed, a layer of clean soil was placed in the bottom of the lighthouse, and a new concrete floor was laid. To make up for the loss of space, the walls of the lighthouse were raised, and a full floor was added to the lighthouse. The bottom floor was earmarked for a boathouse and storage, leaving the keeper and his family with just the second floor that contained a combination kitchen and sitting room, and two bedrooms. Other improvements carried out at this time included renewing the plaster and window frames, installing new blinds, building a new porch, laying a new tin roof, and painting the entire structure.

An 1887 drawing of Fishing Battery shows that the Bureau of Fisheries had a residence on the island along with a mechanics cottage, a storehouse and icehouse, a water tower, a boat basin, coal bins, and a boiler. The operation also possessed a fish basin and hatchery as well as a gated shad pond.

William Schoenfelder became head keeper of Fishing Battery Lighthouse in 1911, after having served in that capacity at Thomas Point Shoal Lighthouse for the previous three years. During his service at Fishing Battery, Keeper Schoenfelder was commended in 1915 for assisting a man who fell overboard from a dredge near the lighthouse.

An acetylene apparatus was installed in the lighthouse at a cost of $1,159 in 1917, eliminating the need for a resident keeper, and in 1921, the light was transferred to a thirty-eight-foot steel tower erected near the lighthouse.

In 1942, Fishing Battery Island was deeded to the Department of the Interior to be used as part of a migratory bird and wildlife refuge with the stipulation that there be no interference with the use of the small area set aside for lighthouse purposes. Known as the Susquehanna Wildlife Refuge, the area was home to thousands of ducks. Changes in water quality and quantity severely impacted the area, and Hurricane Agnes in 1972 destroyed what remained of the good waterfowl vegetation. The waters were subsequently returned to the State of Maryland in 1978, but Fishing Battery Island remains a part of the National Wildlife Refuge System.

The Battery Island Preservation Society, working closely with the Havre de Grace Maritime Museum, proposed a plan in the 1990s to transform the eroding island and dilapidated lighthouse into a public park and historic bed and breakfast. The project received official approval, but the effort had fizzled by the time an official lease agreement was ready.

While groups like the Havre de Grace Maritime Museum make alternate arrangements, the lighthouse and its dwindling grounds have endured increasingly brazen acts of vandalism. In 1992, it was reported that the stair treads, shutters, window sashes and other wooden parts were all torn from the building and used as fuel for a bonfire. In 1994, a metal plaque indicating the lighthouses historical value was stolen the same weekend it was put up. Newly applied plywood coverings for the lighthouses windows and doors were also ripped off and used in campfires.

On a Chesapeake Chapter of the U.S. Lighthouse Society trip to the Battery aboard the forty-nine-foot skipjack Martha Lewis in 1999, it was evident that the 1853 structure was suffering from severe neglect. Society members described the island as a patch of dry land only inches above lapping high-tide waves, and its historic lighthouse as a rundown two-story stone house that shoulders a ruined thirty-two- foot-high turreted light tower. The thirty-six members on the tour that day climbed down into a motorboat hanging off the Martha Lewis, and in groups of four or five made their way through the shallow waters to a wooden landing located a few feet from the lighthouse. In addition to the lighthouse, the small island is home to a single picnic table, and a few scruffy trees. Recent island visitors had left behind evidence of their stay in the form of beer cans and fire rings.

Despite its derelict appearance, local citizens and volunteers have not given up hope. Local architects and engineers have donated time towards a feasibility study for the restoration of the island. The islands preservation society has obtained estimates for rebuilding the stone bulkheads that previously encircled the island. Most of the bulkheads are still in the area and would only require being moved back into position. The lighthouse itself is still structurally intact, and the ambitious goal is to restore its cisterns, boathouse and cast-iron lantern. Future plans would also include the restoration of some of the demolished outbuildings like the fish hatcheries, which were so vital to area commerce in the 1800s. While the whereabouts of the lighthouses Fresnel lens is officially unknown, it is rumored that the lens is being kept safe by friends of the lighthouse in anticipation of the structures eventual renovation.

Located on Fishing Battery Island, just over three miles south of Havre de Grace and the entrance to the Susquehanna River.
Latitude: 39.4945, Longitude: -76.083

For a larger map of Fishing Battery Lighthouse, click the lighthouse in the above map.

The lighthouse is owned by the U.S. Fish and Wildlife Service. Grounds open, dwelling/tower closed.