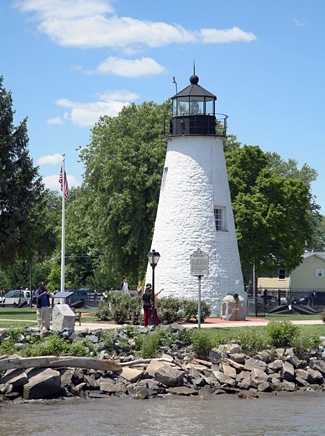 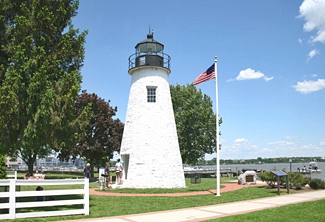 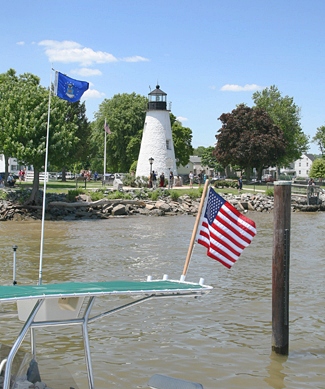 Concord Point Lighthouse at Havre de Grace, Maryland was established to warn seafaring vessels away from the treacherous currents and shoals near the mouth of the Susquehanna River. Master builder John Donahoo was responsible for the construction of the lighthouse in his hometown, where he also served multiple terms as a Havre de Grace town commissioner. At the time of its decommissioning in 1975, Concord Point Lighthouse had the distinction of being the oldest beacon in continuous use in Maryland. The name Concord Point is derived from Conquered Point, which is itself a rearrangement of the original christening, Point of Conquest.

The 484-square-foot lighthouse tract was deeded to the federal government by the town commissioners in 1826, and on May 18 of that year Congress provided $2,500 for the lighthouse and added $1,500 to this amount on March 2, 1827. Donahoo built the thirty-foot-tall lighthouse and the associated keepers dwelling, which was located 200 feet away, between May and November of 1827. The lighthouse, a truncated conical tower topped by a lantern and deck, was built with Port Deposit granite, barged down the Susquehanna River. The towers walls are three feet, three inches thick at the base, where the inside diameter of the tower is eleven feet, and taper to a thickness of one-and-a-half-feet at the lantern room. A tongue and groove mahogany door, identical to one used at Pooles Island light, originally guarded the entranceway, while a spiral staircase made of triangular granite steps leads to a quarter-circular stone landing, from which the lantern may be accessed by climbing a slightly angled iron ships ladder. The lantern floor is composed of radially cut stone pieces, which are held in place by flat iron keys. The storm panels in the lantern are secured by iron mullions cast in an unusual fin shape. The original illuminating apparatus consisted of multiple lamps, each with its own sixteen-inch reflector.

The thirty-four by twenty-foot, one-and-a-half-story keepers house, which remains standing, was also built out of Port Deposit granite and was originally equipped with a fireplace and a closet in each of its four rooms. The building contract specified large double-hung windows of eight-over-eight panes of glass and a shingled roof. The attached kitchen, which is no longer standing, possessed a sizable oven with an iron door and crane, and a sink with a spout leading through the wall. From the dwelling, the keeper was able to take in the panorama of the lighthouse overlooking the confluence of the Susquehanna River and Chesapeake Bay.

As John Donahoo was nearing completion of Concord Point Lighthouse, his fourth lighthouse, he took time in August 1827 to pen a letter to Major Barney, who had some influence in the appointment of lighthouse keepers on Chesapeake Bay. After noting that the government contracts had left him without a dollars reward, Donahoo wrote: I beg leave to ask your exertions & influence to have me appointed keeper of the ... Light House, where I can attend to the duties, attached to that situation without leaving my large family who are domiciliated there with out any other male protector other than myself. Though Donahoo was certainly deserving, John ONeill was appointed the first keeper, forcing Donahoo to continue building lighthouses to support his family.

Over the years, the keepers of Concord Point Lighthouse were mostly descendants of John ONeill, an Irish immigrant who arrived in America at the age of eighteen. ONeill achieved lasting fame during the War of 1812, when British ships commanded by Admiral Sir George Cockburn turned their guns on Havre de Grace. As a local militia lieutenant in charge of some four dozen men, ONiells mission was to hold a small parapet of three cannons named Potato Battery. Many of ONeills soldiers were too old to serve in the regular United States Army, and when the British opened fire they all quickly abandoned their posts. ONeill declined to join his retreating men, and heroically took charge of one of the cannons himself. He later described the experience: The grape shot flew thick about me. I loaded the gun myself without anyone to serve the vent, which, you know is very dangerous, and when I fired her, she recoiled and ran over my thigh. Shortly thereafter ONeill was forced to retreat into town; nevertheless he procured a musket and continued to fire on the ships, all the while trying to entice the fleeing members of his troop to return and assist him. ONeill was eventually captured by the British and sentenced to be hanged aboard one of their ships, prompting his fifteen-year-old daughter to reportedly row out in a skiff and plead for her fathers life. Admiral Cockburn was so impressed by her courage that he released ONeill and gave the Irishmans daughter a gold and tortoise-shell snuff box, which is presently in the keeping of the Maryland Historical Society.

ONeill managed to parlay his heroic stature into a town commissioners position in Havre de Grace. He also managed another political appointment: first lighthouse keeper at Concord Point. At the time, the appointment of keepers was a very politicized process, with the coveted jobs usually going to veterans and those well connected to powerful decision makers. ONeill stayed on the job from 1827 until his death in 1838. Following ONeill, Thomas Courtney and John Blaney each served two terms as keeper until Thomas Sutor took charge of the light in 1853. John ONeill, Jr. succeeded Keeper Sutor in 1861 and served until his death in 1863, at which time his wife Esther assumed responsibility for the light. During a portion of the eighteen years she was in charge of the light, Esther was assisted by Gabriel Evans, her son-in-law. Henry E. ONeill became keeper of the light after his mother resigned in 1881 and served until his death in 1919.

During World War I, the Lighthouse Service encouraged its personnel to grow gardens and purchase liberty bonds to support the war effort, and in 1918, seventy-seven-year-old Henry ONeill used $300 he had saved for funeral expenses for himself and his wife to purchase bonds. A letter mentioning ONeills sacrifice reached President Woodrow Wilson, to which he replied, The inclosed letter is not only interesting but touching, and I am cheered to have seen it.

A perusal of the Lighthouse Boards annual reports reveals that Concord Point Lighthouse has been a relatively low-maintenance structure over the years. On May 10, 1855, a steamers lens replaced the nine constant-level lamps and reflectors used in the lantern room, and this in turn was upgraded to a sixth-order Fresnel lens in 1869, and then a fifth-order lens in 1891. The signature of the light was changed from fixed white to fixed red in in 1879, and then to fixed green in 1931.

In 1884, an extra story with four rooms was added to the keepers dwelling, providing better accommodations for Keeper Henry ONeill and his family. The light was switched over to electrical operation in November 1918. Keeper ONeill was scheduled to retire the following month, and he was allowed to remain in the house as a custodian. Following the passing of Keeper ONeill , the dwelling was sold to Michael Fahey in 1920 for $4,000, and the structure was subsequently used as a rooming house, restaurant, and bar.

Concord Point Lighthouse was decommissioned in 1975, and shortly thereafter the Fresnel lens mysteriously disappeared from the tower. A group of concerned citizens formed the non-profit Friends of Concord Point Lighthouse in 1979 to restore and maintain the structure. The tower was restored in 1981, and in 1983 a fifth-order Fresnel lens, on loan from the Coast Guard, was mounted in the lantern room.

The Friends helped turn the lighthouse grounds into a beautiful tree-lined park, which attracts thousands of visitors each year. The landscaping improvements made to the property are impressive, given that the grounds were in the past open and grassy, without many sizable trees. Havre de Grace town records indicate that portions of the grounds behind the keepers dwelling were initially swampy, requiring John ONeill to fill them in using a horse and cart.

In 1988, the non-profit group turned its attentions to the keepers house, after the state acquired the property that year and turned it over to the city. As the dwelling had been significantly altered during its lifetime, the Friends commissioned a study of the houses history and original architecture, which was a vital step given the Maryland Historic Trusts very strict standards for restorations. Between 1988 and 1997, the structure was stabilized and modern additions were demolished, and then between 2002 and 2004, the interior of the dwelling was restored. A before and after photograph of the dwelling show the remarkable job the Friends have done. Visitors to the lighthouse and dwelling are now afforded a glimpse into the everyday lives of lighthouse keepers and their families, circa the late 1800s.

Concord Point Lighthouse is currently listed as a private aid to navigation, exhibiting a light from its fifth-order Fresnel lens. Some insist that the present lens, on loan from the Coast Guard and the Chesapeake Bay Maritime Museum, is in fact the original one that disappeared in 1975.

For a larger map of Concord Point Lighthouse, click the lighthouse in the above map.

From Interstate 95, take Exit 89 and drive southeast on Level Road and then Superior Street to Havre de Grace. At the bottom of the hill, turn right on Juanita Street. Continue on Juanita for just under a mile, then turn left on Revolution Street. Follow Revolution until it ends, and then turn right on Concord Street. The lighthouse is near the intersection of Concord and Lafayette Streets.

The restored keeper's dwelling and lighthouse are open on Saturdays and Sundays from 1:00 p.m. to 5:00 p.m., April through October. Special tours and weddings may be scheduled by calling (410) 939-3213.

The lighthouse is owned by the City of Havre de Grace. Grounds open, dwelling/tower open in season.


Be sure and check out the cannon atop a granite block that was erected in 1814 as a "Centennial Memorial to John O'Neill." The following inscription is on the stone:

THIS CANNON OF THE WAR OF 1812
MARKS THE SITE OF THE BATTERY ON CONCORD POINT
WHERE
1769 JOHN O'NEILL 1838
SERVED THE GUNS SINGLE HANDED DURING THE
BRITISH ATTACK UPON HAVRE DE GRACE
MAY 3, 1813, UNTIL DISABLED AND CAPTURED.
HE WAS RELEASED FROM THE BRITISH FRIGATE MAIDSTONE
THROUGH THE INTERCESSION OF HIS YOUNG DAUGHTER MATILDA
TO WHOM ADMIRAL COCKBURN GAVE HIS GOLD MOUNTED
SNUFF-BOX IN TOKEN OF HER HEROISM. AS A TRIBUTE TO
THE GALLANT CONDUCT OF HER FATHER, THE CITIZENS OF
PHILADELPHIA PRESENTED TO HIM A HANDSOME SWORD.