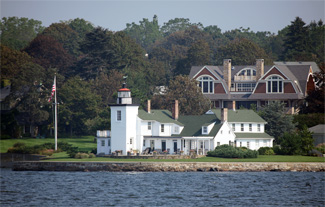 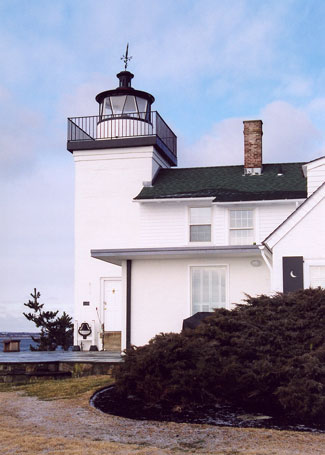 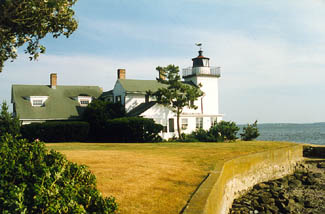 The first lighthouse at Nayatt Point was built in 1828 to mark the narrow channel at the entrance to the Providence River that runs between Nayatt Point on the east and the reef off Conimicut Point. Though greatly expanded, the original keepers house still stands today and is the oldest keepers dwelling in Rhode Island.

Congress provided $3,500 for the lighthouse on May 23, 1828, and a deed was recorded on June 13, 1828 in the office of the town clerk of Barrington County in which Anna Lilly conveyed to John Quincy Adams, President of the United States, for the use of the United States, a certain tract of land being the south westerly part of Nayatt Point.

When Nayatt Point Lighthouse was constructed, the law required the government to accept the lowest bid for the project. The contractors qualifications or general competence had no bearing whatsoever on the selection process. This law came back to haunt lighthouse authorities more than once over the years. In the case of Nayatt Point, Stephen Pleasonton of the U.S. Treasury Department wrote, As there is no option left us by law but to accept the lowest offer, you are authorized to accept and enter into contract with William Halloway and Westgate Watson accordingly.

As soon as it was finished, the first tower at Nayatt Point started falling apart. The wooden spiral staircase in the tower was too narrow and difficult to negotiate, and the lantern room was apparently designed with very short and extremely skinny keepers in mind.

The following report on the lighthouse was made by Lieutenant George M. Bache of the U.S. Navy in 1838:

Vessels arriving at or departing from Providence river are benefited by this light, as it serves to point out the narrow passage between the point from which it is shown, and the shoal off Conanicut point. It is elevated thirty-eight feet above high-water mark; its limit of visibility is 11 ½ miles. The tower is 23 feet high; it was built of brick, in 1828, and has a winding stairway of wood in the interior. A stone wall protects it from the encroachment of the water to the southward, and the southward and westward.

The lighting apparatus consists of six lamps with concave reflectors, so arranged upon a circular table as to illuminate three-fourths of the horizontal circle, which, on account of the trenching of the land, is 20° more than is required to be illuminated. The reflectors are of two sizes: the larger size are nine inches in diameter, and weigh nine ounces each; the smaller size are eight and a half inches in diameter, and weigh seven ounces. There are many indentations upon them, and the silver is much worn from their concave surfaces; two of the smaller size are bent from their original forms. The dwelling-house, containing five rooms, is of stone, and requires frequent repairs.

In 1855, a strong winter storm almost destroyed the seawall that protected the lighthouse. The lighthouses foundation was undermined, and large cracks appeared in the tower from top to bottom. Results of a survey indicated that the tower wasnt worth the cost of fixing it, so the following year it was replaced by a square tower. Congress provided $6,500 on August 18, 1856 for building the new tower, equipping it with a new illuminating apparatus, and for protecting the site. The new tower was built sixty-five feet northeast of the original tower and began beaming forth its light on December 25, 1856.

A fourth-order Fresnel lens was used in the new lighthouse, but Nayatt Point Light was still considered inadequate, partly because it was only at thirty-one feet above the river. In 1860, Congress provided funds for construction of a round granite tower on the sandy shoal extending from Conimicut Point. At first, this tower was merely a daymark, but responding to petitions from local mariners, the Lighthouse Board decided that a lighted warning beacon on the shoal would not only be easier for ship traffic entering the Providence River to see, but it would also help mariners avoid running onto the point. On November 1, 1868, the Fresnel lens was transferred from Nayatt Point Lighthouse to the new Conimicut Point Lighthouse, and Nayatt Point Light was deactivated.

For the next few years, the old keepers house on Nayatt Point served as the residence for the Conimicut Point keeper until a dwelling was built on the pier next to Conimicut Lighthouse in 1873. The dwelling on Nayatt Point was not sold but at this time but placed under the temporary charge of a custodian. This proved to be a wise decision, as in March 1875 a heavy field of floating ice came down the Providence River and demolished the keepers dwelling at Conimicut Lighthouse. The dwelling on Nayatt Point was once again occupied by lighthouse keepers, and the structure was repaired and enlarged for their convenience.

The present Conimicut Lighthouse, an iron spark plug tower, was finished in 1883, allowing the keepers to once again live on site. No longer needed by the Lighthouse Service, Nayatt Point Lighthouse was auctioned off in 1890 to Charles H. Merriman for $4,000. Over the years, various owners have altered and expanded the building, but the original purpose of the structure is still clearly evident.

Barbara and Leonard Lesko purchased Nayatt Point Lighthouse in 1983, shortly after Leonard accepted an offer from Brown University to chair its Department of Egyptology. Both of the Leskos have authored books on Egypt, and after having spent eighteen years on Nayatt Point, they decided to write Lighthouse Life, a book that chronicles their efforts to restore the lighthouse, maintain the granite seawall, and garden on the salt-sprayed property.

Nayatt Point Lighthouse is listed in the National Register of Historic Places, but as it is a private residence, it is not open to the public. The lighthouse is best viewed from the water, preferably in a boat with a shallow draft. In 1997, the historic lighthouse and keepers residence went on the market for an asking price of $1.275 million, and eventually sold in 2001. A fourth-order lens from a lightship is presently used in the tower as an unofficial light.

Located on Nayatt Point in Barrington, marking the eastern side of the entrance to the Providence River from Narragansett Bay.
Latitude: 41.72512, Longitude: -71.3389

For a larger map of Nayatt Point Lighthouse, click the lighthouse in the above map.