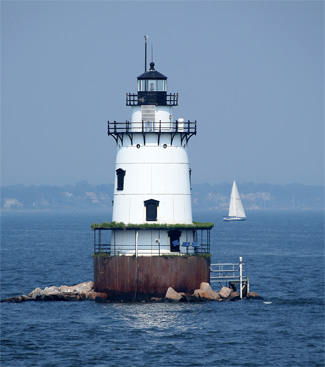 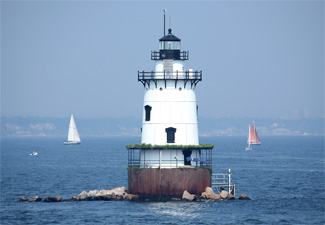 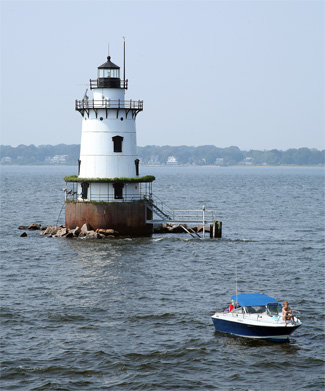 The first lighthouse at Conimicut Point Shoal was established in 1868, when a lantern room and a fourth-order Fresnel lens were placed atop a granite tower that had been built on the shoal in 1866 as a daymark to guide navigators transiting between Narragansett Bay and the Providence River. The towers light allowed the nearby Nayatt Point Lighthouse, which had been established in 1828, to be discontinued.

Even before the granite tower on Conimicut Point Shoal was complete, captains and owners of vessels sent a petition to the Lighthouse Board asking that a light be exhibited therefrom. On March 2, 1867, Congress provided $15,000 to make such alterations in the day beacon at Conimicut Point, Providence River, as to fit it for the exhibition of a light. These alterations included increasing the height of the granite tower and arranging the necessary watch and store rooms. On November 1, 1868, the Fresnel lens was removed from Nayatt Point Lighthouse and placed in Conimicut Point Lighthouse, which was activated for the first time that evening. Besides a fixed white light, the lighthouse also had a fog bell that was struck at regular intervals during periods of limited visibility.

While the addition of a lighthouse closer to the channel was a blessing for ships navigating the Providence River, it was a nuisance for keepers assigned to the station, as living quarters had not been included in the plans. Keeper Davis Perry and his assistant were forced to row back and forth to the quarters at Nayatt Point Lighthouse. The mile-long trip had to be made in a small rowboat, often while fighting dangerous currents and avoiding ship traffic.

On March 3, 1873, Congress appropriated $15,000 for a dwelling at Conimicut Lighthouse, Provided, that upon completion of said dwelling the Secretary of the Treasury is authorized and directed to sell, at public auction, after due notice, and either in one parcel or divided into lots, the land constituting the site of the old light-station at Nayat Point. A keepers dwelling was accordingly added at Conimicut Shoal on a pier just north of the tower, and the old dwelling at Nayatt was placed under the care of a custodian. In March 1875, Keeper Horace Arnold and his son barely escaped the dwelling as a heavy field of floating ice crashed into pier the supported it. The following account of the incident appeared in The Daily Star on March 9:

Last Thursday a heavy cake of ice struck the Conanicut light-house on Providence River. The foundation, as soon as the ice struck it, caved in, and the structure, which is a small two story wooden house, toppled over and fell into the river. The keeper, Horace Arnold, and his son Earnest, aged nine years, were the only occupants, Mrs. Arnold and the rest of the family being on the shore visiting a friend.

The father, fortunately, did not lose his presence of mind at the suddenness of the catastrophe, but set his wits to work to save his boy. The building fell upon its side and at the time both were asleep in the upper story. Mr. Arnold swam about for upwards of an hour with him upon his back, inside the building, but came to the conclusion that something must be done at once to attract the attention of the people upon the shoreHe accordingly procured a water soaked mattress, tied it to the building inside and left the child upon it while he went into the tower of the light house, to ring the bell and set a signal of distress.

The keeper and his son were eventually rescued by the tug Reliance and the schooner Oliver Johnson. The furnishings and all of their possessions were lost, and Keeper Arnold was forced to live at Nayatt Point Lighthouse, which fortunately the government had not yet sold. Four years later, Keeper Arnold was awarded $319 as compensation for his possessions lost in the incident.

The position of assistant keeper had been eliminated with the addition of a residence at Conimicut Lighthouse, but it was reinstated now that the keepers had to once again row between shore and the residence on Nayatt Point.

The first Conimicut Lighthouse, which was in a very leaky condition and greatly out of repair was torn down in 1883, and the present cast-iron caisson lighthouse was completed. The second lighthouse is similar in design to lighthouses at Stamford Harbor, Latimer Reef, and Tarrytown. When the new Conimicut Lighthouse went into service, the property on Nayatt Point was placed under the charge of a caretaker until it was sold at auction in 1890.

Ellsworth Smith was serving as keeper of Conimicut Lighthouse in June 1922, when his wife Nellie gave poisonous mercury bichloride tablets to the couples two-year-old and five-year-old sons and then took some herself. A year at the remote station was too much for Nellie Smith, who had become morose and despondent and threatened to kill herself on more than one occasion if her husband didnt take her away from the lighthouse. On June 8, 1922, Keeper Smith had business ashore, and in his absence, Nellie found his keys, opened the medicine cabinet, and administered the tablets to her two sons, telling them they were candy. When Keeper Smith returned that evening, he found the two-year-old and his wife dead, but the older son, disliking the taste of the tablet, had spat it out and was still alive, though in terrible agony. Smith rushed the boy ashore, where he was administered an antidote and taken to relatives. Understandably, Conimicut Lighthouse was dark that evening, but mariners received a broadcast apprising them of the outage.

Keeper Smith seems to be the same Ellsworth Smith who while serving at Great Beds Lighthouse, New Jersey in 1916 was able to find a bride after three months of advertising. Helen Barry of New Haven, Connecticut responded to the advertisement, but when she arrived at Perth Amboy to tie the knot, the city clerk refused to grant a wedding license because Helen was just sixteen. This obstacle must have somehow been overcome as a newspaper article published a few months later noted that Smiths young bride from New Haven had been living at Great Beds Lighthouse for a few weeks. Helen could easily be the Nellie who poisoned her children at Conimicut Lighthouse as the couple had been married six years by that time and the age of the oldest son was five. The only conflicting information is that Nellie was reportedly thirty at the time of her death.

As a general rule, lighthouse keepers were glad to have visitors to help relieve the isolation, but some of Conimicuts keepers may have had second thoughts about that. Local fishermen often came to the lighthouse to fish off the rock foundation. By the mid-1930s, there were sometimes forty to sixty people all crowded on the riprap at the same time. With Coast Guard help, the station was eventually posted as off-limits, and the keeper could return to his peace and quiet.

Conimicut was one of the last lighthouses in the United States to convert its lantern from incandescent oil vapor to electricity. This change was made in 1960, and three years later the beacon was automated, and the original fourth-order Fresnel lens and keepers were removed from the fifty-eight- foot-tall tower. Conimicut Lighthouse remains an active aid to navigation, flashing a white light every two-and-a-half-seconds, and the lighthouse is now listed in the National Register of Historic Places.

The City of Warwick acquired Conimicut Lighthouse in 2004, under provisions of the National Historic Lighthouse Preservation Act of 2000. Two former Conimicut keepers, Fred Mikkelsen and Robert Onosko, were present at the ceremony on September 29, 2004 that made the transfer official. While the Coast Guard still looks after the lighthouse beacon and fog signal, the City of Warwick is responsible for the lighthouse structure. In 2005, the Conimicut Lighthouse Foundation was created, and the state Department of Transportation awarded $560,000 in federal transportation enhancement funds to help restore the lighthouse. This money must not have materialized, as ten years after the city assumed ownership of the lighthouse, nothing had been done to restore or maintain the structure.

In 2014, Nick Korstad, who purchased Borden Flats Lighthouse, restored it, and rents it as a bed-and-breakfast, offered to lease Conimicut Lighthouse and do the same thing with it that he had done with Borden Flats. Unfortunately, some council members were rankled by the mayors discussions with Korstad and blocked the lease. Bonnie Halda, a spokesperson for the National Park Service, weighed in on the state of the lighthouse: Wecontinue to be concerned about the deferred maintenance of the light, and we encouraged the city to expand their search for other sources of funding. Turning away someone who has already restored an offshore lighthouse seems like a short-sighted move by council members who have failed to do anything for the lighthouse during the past decade. In 2015, the city finally issued a request for lease proposals and dropped two requirements they had been considering: a $100,000 performance bond, and the creation of an exhibit at Conimicut Point Park. Korstad plans to submit a bid for the lighthouse, which is roughly double the size of his Borden Flats Lighthouse.

For a larger map of Conimicut Lighthouse, click the lighthouse in the above map.

The lighthouse is owned by the City of Warwick. Tower closed.