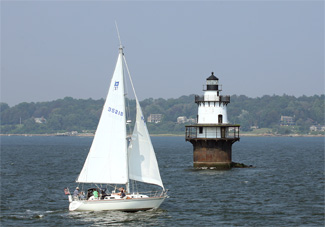 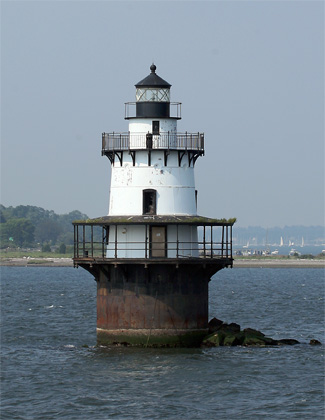 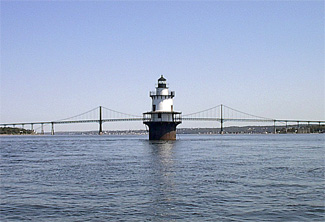 Hog Island is about 200 acres in size with a length of one-and-a-half miles and a width of three-quarters of a mile. The early settlers of Newport found the island, and others nearby, convenient for livestock, as the animals could not wander afar, no fences were necessary, and natural predators like wolves and foxes could not reach the island. Hogs were regularly kept on the small island, giving rise to the islands now common name. Hog Island lies off Bristol Township and is situated just north of the passage leading from Narragansett Bay to Mount Hope Bay. Bristol Ferry Lighthouse, completed in 1855, marked the narrow passageway, but a dangerous reef, extending south from Hog Island to the main shipping channel, was also a threat to ferries and other vessels transiting between the two bays.

The Old Colony Steamboat Company placed a private light-boat near Hog Island in 1866 to protect their steamers running between Fall River and New York, but the vessels light was so dim that it was only visible during good weather, and therefore basically useless. The Lighthouse Board informed Congress in 1869 that if it saw fit to relieve this company of this unusual expense, which it incurs for the benefit of others as well as for itself, by authorizing the building of a light-house with a protecting pier, in about six feet of water on the reef, the estimated cost would be forty-five thousand dollars.

The boards request for a lighthouse was not funded, so in 1885 Congress was asked to approve the transfer of Eel Grass Shoal Lightship, made unnecessary by the completion of Latimer Reef Lighthouse at the east end of Fishers Island Sound, to Hog Island. With Congress blessing, the ship was towed to Hog Island and renamed Hog Island Shoal. Built in 1846, the lightship was a seventy-two-foot-long wooden schooner built from white oak and locust with two masts. Before making its way to Eel Grass Shoal and then Hog Island, the lightship had previously served at York Spit, Virginia, Wolf Trap Shoal, Virginia, and Cornfield Point, Connecticut.

A Notice to Mariners advised that on or about Aug. 14, 1886, Lightship No. 12 will be moored in 6 to 8 fathoms of water, off the S end of Hog Island Shoal, Narragansett Bay, RI. The vessel is schooner rigged and painted a lead color, with the words Hog Island Shoal on each side, in large black letters, and No. 12 on each quarter. A fixed white light will be shown from the foremast head, at about 38 feet above the level of the sea, and should be visible in clear weather about 11 ½ nautical miles. The daymark is a black square cage.

In 1889, the ship developed serious leaks in its wooden hull and was temporarily removed for repairs. Over the next few years, it became obvious that the aging ship was structurally weak from general decay, induced by her old age, rendering the vessel completely beyond economical repair. The cost of building a new lightship was estimated to be $70,000, and that amount was requested from Congress in 1891. After repeating the request for a new lightship, the board switched tactics in 1895 and asked for $35,000 for a lighthouse at Hog Island instead. The old lightship had to be patched up each year until funds were finally provided for the lighthouse on March 3, 1899.

A preliminary examination of the shoal was made in June 1899, and shortly thereafter bids were invited for the necessary metalwork and erection of the lighthouse, combined in one contract. Construction on Hog Island Shoal Lighthouse began during 1900, and LV 12 remained on duty until the work was finished. On July 12, 1901, the lighthouse tender Cactus pulled up alongside the lightship to deliver supplies. A ships officer boarded the lightship and asked for Keeper William Walin. When Walin appeared, he was dirty and obviously drunk. I accused him of it, wrote Lt. Spencer Wood, and he said he had only been drinking tea; after a few questions I ordered him to go below. Lt. Wood waited until the assistant keeper returned from shore, and then placed him in charge of the lightship and took Keeper Walin aboard the Cactus. An investigation revealed that this wasnt the first time Walin had been drunk, and he was consequently dismissed from the Lighthouse Service.

Regulations against drinking on duty and other infractions by lighthouse keepers were strictly enforced. As early as 1806, President Thomas Jefferson had written, I think the keepers of light houses should be dismissed for small degrees of remissness, because of the calamities which even these produce.

Work on the foundation caisson began at the site in late 1900 and was completed the following July, when work on the superstructure started. The first and second sections of the tower plates were in place by July 20, 1901, and by the end of August, the superstructure up to the lantern room floor had been put in place and the first three stories lined with brick. The lantern room was installed in September, and the lighthouse was ready for inspection on October 16, 1901. Hog Island Shoal Lighthouse began service on November 14, 1901, and LV 12 was sold at auction two years later for $360.

Ernst Borgstrom, who had been mate aboard Ram Island Reef Lightship, was appointed the first keeper of Hog Island Shoal Lighthouse with Adolph Aronson, who had served aboard Hog Island Shoal Lightship, as his assistant. Initially, the keepers primary responsibility was to mind the lamp inside the fifth-order lens that cast a flashing white light to the south and east and had a dark sector over Hog Island, as the stations compressed-air siren was not placed in operation until April 5, 1902.

Toomey Brothers of Guilford, Connecticut, who had recently completed Plum Beach Lighthouse, were selected as the contractors for Hog Island Shoal Lighthouse. Instead of dropping the caisson foundation into place and then pumping the water out of the interior, pneumatics were used to pressurize the bottom ring of the foundation to give workers a relatively dry work area. As muck and silt were removed from the seabed by the men in the pressurized compartment, the caisson settled to a depth of roughly eight feet. To provide protection from floating ice, 1,500 tons of riprap were placed around the base of the tower as part of the construction contract.

The new tower at Hog Island Shoal sat at the entrance to Mount Hope Bay and was sixty feet tall with five levels plus the lantern room. The first level, situated in the top of the foundation, was lit by four round port-hole windows. A covered gallery surrounds the second level, which served as the stations galley. The second and third levels housed living quarters, while the fourth level was the watchroom. A fourth-order Fresnel lens replaced the towers original optic in 1903, at which time the lights characteristic was changed from flashing to fixed.

Edward Duffy spent nearly thirty years at Hog Island Shoal Lighthouse, starting at an assistant in 1916 and being promoted to head keeper in 1918. In 1935, Keeper Duffy and Mahlon Burdge, his first assistant, were recognized for recovering the body of a man who drowned after falling overboard from his boat. The keepers spent three days dragging the nearby waters before they were able to locate the body.

Hog Island Shoal Lighthouse is listed in the National Register of Historical Places and remains an active aid to navigation, showing a flashing white light with an interval of six seconds. The station was electrified in 1959 through the laying of a submarine cable and then automated in 1964.

In 2004, the General Services Administration announced that Hog Island Shoal Lighthouse was available under the provisions of the National Historic Lighthouse Preservation Act of 2000. Qualified parties were required to prove that they could maintain the structure, as well as offer public access to the lighthouse. When no qualified recipient was found, the lighthouse was placed on the auction block on May 23, 2006. The winning bidders, Jon and Juli Chytka of South Dakota, paid $165,000 and will need to negotiate a submerged lands lease with the state Coastal Resources Management Council. Juli placed the winning bid from a cafe in Paris, France. Her husband, a lieutenant colonel in the Army was deployed in Iraq at the time. As the property is on the National Register of Historic Places, the new owners must adhere to strict guidelines in any restorative work.

For a larger map of Hog Island Shoal Lighthouse, click the lighthouse in the above map.

The light is best viewed from the water, but reasonable views can be had from the Mount Hope Bridge on Highway 114. Distant views are also possible from the Prudence Island - Bristol Ferry. For a ferry schedule, call (401) 683-0430.


Not far from Hog Island Shoal Lighthouse is found the old foundation for the Musselbed Shoals Lighthouse, which was activated in 1873.