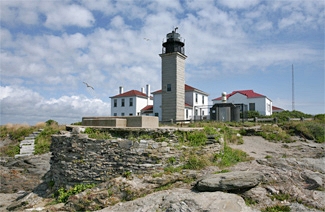 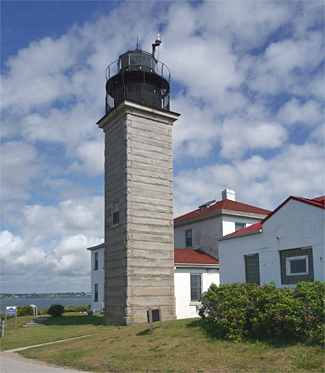 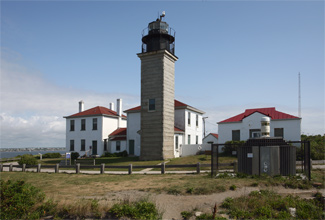 Although Rhode Islands first settlers were farmers, the colony soon developed a thriving maritime economy as well. By the early eighteenth century, it was estimated that one in four men living in Rhode Island made their living in some way from the sea. Although exports included tobacco, maize, and lumber, the export of rum was the basis of a notorious trade triangle involving rum, slaves, and molasses. Ships took rum to West Africa, where it was traded for slaves. The slaves were then taken to the West Indies, where they were traded for molasses and sugar, which was brought back to Newport. In a single five-year period in the 1730s, over six thousand Africans were delivered to the Caribbean islands. Slave commerce was an important part of Rhode Islands economy for around 100 years. The rising importance of shipping to the colony of Rhode Island led to a lighthouse being proposed for the southern tip of Conanicut Island, known as Beavertail Point. The outline of the southern portion of Conanicut Island resembles a beaver, and the lighthouse was to be placed at the tip of its tail. Beginning in 1731, ships calling at Newport had their cargoes taxed to fund the future lighthouse. Construction was delayed for about ten years by war between England and Spain, but the lighthouse was finally finished in 1749. In February 1749, the following announcement appeared in the Newport Town Record: A committee was appointed to build a Lighthouse at Beavertail on the Island of Jamestown, alias Conanicut, as there appears a great necessity for a lighthouse as several misfortunes have happened lately for want of a light.

The resulting wooden tower stood sixty-eight feet tall, was twenty-four feet in diameter at its base, and tapered to thirteen feet at the lantern deck. The lighthouse, known early on as Newport Lighthouse, was the third to be built in what would become the United States. Abel Franklin, a member of the committee charged to construct the lighthouse, was appointed the first keeper.

The wooden lighthouse burned to the ground on July 23, 1753, only four years after it was finished, and in 1754 a fifty-eight-foot brick and stone tower was built to replace it.

During the early part of the Revolutionary War, British troops controlled Newport. In 1779, as they were retreating, the redcoats set fire to the lighthouse and took the optic. Although the fire warped the masonry walls, the tower was repaired and put back into service in 1783. After Rhode Island ratified the U.S. constitution in 1790, control of the lighthouse passed from the state to the federal government, and Alexander Hamilton, the Secretary of the Treasury, recommended that William Martin be retained as keeper of the lighthouse at an annual salary of $140.

Since the station was so close to the water, it often caught the full force of storms. Sometime during the early 1800s, Keeper Philip Caswell and his family were forced to flee when high waves threatened to destroy the small two-room keepers house. The dwelling escaped this storm with minimal damage, but the hurricane of 1815 would destroy the edifice. Fortunately, Caswell had again moved his family elsewhere before the storm as a precaution. The lighthouse tower survived the hurricane, although all twenty panes of glass in the lantern house were broken. The next year, a new five-room keepers dwelling was constructed.

Beavertail Lighthouse was used repeatedly to conduct experiments with new fog signals and lighting equipment. In 1817, a local inventor named David Melville tried out a new coal gas process. The gas was generated by burning a mixture of coal and tree resin and piped through copper tubing to a chandelier in the lantern room. The cheaply produced gas resulted in a brighter and cleaner light, but lobbying pressure from the companies that sold whale oil (which was the standard fuel for lighthouse beacons at that time) brought an abrupt end to Melvilles work less than a year after it began.

In 1851, another experiment involved a fog signal created by Celadon Daboll, an inventor from New London, Connecticut. Dabolls foghorn, which consisted of a vibrating metal reed inside a long trumpet, was powered by compressed air that was pumped into a 200-cubic-gallon holding tank by a horse attached to a revolving apparatus. Six years later, Dabolls foghorn was replaced by an experimental steam whistle.

Edward Carpender, a lieutenant in the U.S. Navy, surveyed and examined all the lighthouses between Newport and Boston in 1838 and included the following information on Beavertail Lighthouse in his report to the Secretary of the Treasury:

This useful light stands on the southern extremity of Conanicut island, 98 feet above the level of the sea, in a stone tower 64 feet high. It consists of 15 lamps, with 9-inch reflectors, on two circular tables  8 on the lower, and 7 on the upper table. The reflectors are from 3 to 4 ¾ inches apart, and 5 of them are so much worn as to be of very little use. I recommend, as in other similar instances, the removal of these reflectors, so that the full power of all the lamps may be seen from all points of the compass.

I visited this light in the morning, and found the keeper [Sylvester Hazzard] had left home without having guarded against accidental detention, by first preparing his lamps, reflectors, &c. for use. Indeed, the reflectors had the appearance of not having been cleaned for some days, which might have been owing to the painting and repairs just done to the tower.

Robert H. Weeden accepted the position of keeper of Beavertail Lighthouse in 1844. Upon his death, four years later, his wife, Demaris, took over responsibility for the lighthouse. Demaris is the only female keeper to serve at Beavertail, and aided by her son, she remained at the lighthouse for nine years after her husbands death, just long enough to see the completion of the currently standing fifty-two-foot granite block tower.

During an 1851 inspection, the stone lighthouse was described as the worst built tower yet seen, and found to be in wretched condition, inside and out. Congress provided $14,500 in August 1854 for a new lighthouse, illuminating apparatus, and fog signal for the station, and work at the site commenced in the spring of 1856.

After the third-order Fresnel lens started producing a fixed white light atop the new ten-foot-square tower on October 20, 1856, the old 1754 tower was razed to its foundation, and when a new two-story brick keepers dwelling was completed, the prior dwelling was demolished as well. A second keepers dwelling was built in 1898 to provide housing for an assistant keeper, which office had been added to the station in 1857.

On June 26, 1899, the optic was downgraded to a smaller fourth-order lens that produced a group of eight flashes succeeding one another at intervals of about 2 seconds, followed by a dark interval of 15 seconds. Two months later, the upper half of the previously unpainted granite tower was given a coat of white paint.

Artillerymen at nearby Fort Adams often practiced firing dummy shells into the sea, but one day in December 1908, their aim was particularly bad. One five-inch shell narrowly missed the lighthouse tower, another landed in the yard behind the keepers house, and a third hit the towers foundation, causing the keepers to run for cover. The War Department repaired the damage and assured the Lighthouse Board that the station would never be shelled again.

When electricity reached the station in 1931, the lantern rooms clear windows were covered with green Plexiglas storm panes to change the lights characteristic, and an electric strobe device was mounted on top of the keepers dwelling to automatically activate a fog signal when visibility fell below two miles.

With its exposed location, Beavertail Lighthouse was bound to suffer from the infamous hurricane of 1938 that caused so much damage at stations in Rhode Island. The wind-driven waves swept away the stations fog signal building and uncovered the foundation of the 1749 lighthouse. Although the facilities at the lighthouse were damaged, the loss suffered by Keeper Carl Chellis was far worse. His son, Clayton, and daughter, Marion, were returning home on a school bus, when storm surge toppled the vehicle as it crossed a causeway. Norman Caswell, the driver of the bus, recalls I saw that we would have to leave the bus or be drowned like rats. I told the children to grab each other tightly. I had hold of several when the huge wave came over us. I went down twice. When I came up, I saw Clayton Chellis swimming around. He was the only one who was saved besides me.

When a passerby tried to rescue Caswell, he responded, Please let me die. I lost a whole bunch of the kids I had in the school bus. Everythings gone. Please dont move me. Let me die. Caswell did survive, and when Keeper Chellis arrived at the scene, Caswell told him I got your boy, but your daughters dead  gone. Grief-stricken by the news, Chellis grabbed a handful of rocks and broke out all the windows in the overturned bus. Caswell died shortly after the incident, unable to cope with the deaths of the children. Seven years later, Clayton Chellis drowned in the Pacific Ocean, during his World War II tour of duty.

Beavertail Light was automated in 1972. The station remains an active aid to navigation and is listed in the National Register of Historic Places. The grounds are open to the public, and the Beavertail Lighthouse Museum Association (BLMA) operates a museum in the keepers quarters and assistant keepers dwelling that is open seasonally. One of its main exhibits is the fourth-order Fresnel lens that was removed from the lighthouse in 1991. The fog signal building currently houses an aquarium display operated by the state Department of Environmental Management.

In 2007, The Champlin Foundations awarded a $227,000 grant to BLMA to preserve and restore the granite light tower. Over an eleven-month period in 2008-2009, ABCORE Restorations Inc. replaced or repaired all the deteriorated metalwork in the tower, installed new window panes in the lantern room, and repointed the towers granite blocks. The stone foundation from the 1749 lighthouse was restored in 2012 and then capped the following year with concrete featuring a compass rose. The Beavertail Lighthouse Museum Association mounted two replica trumpet foghorns on the fog signal building in 2014.

The DCB-24 optic used in the lantern room failed in 2019, and the Coast Guard installed a VRB-25 optic in the lantern room in its place. Though new light is one-fifth the size and weighs thirty pounds instead of two hundred, it is just as powerful as its predecessor. Along with the new light, the Coast Guard also installed a Mariner Radio Activated Sound Signal, which enables mariners to activate the fog signal by keying their radio microphone five times in succession.

For a larger map of Beavertail Lighthouse, click the lighthouse in the above map.

From Highway 138 on the eastern side of Conanicut Island, take Canonicus Avenue south 0.9 miles to Narragansett Avenue. Turn right on Narragansett and drive 0.4 miles to S. West Avenue. Turn left on S. West Avenue and follow it to the narrow neck of land, which leads to the second lobe of the island. At this point, the road becomes Beaver Tail Road. Follow Beaver Tail Road to its end at Beaver Tail State Park, where you will find the lighthouse. Beavertail Lighthouse Museum was opened in the assistant keeper's dwelling in 1989 and expanded into the head keeper's residence in 2013. The museum is open daily during the summer and on weekends in late spring and early fall. The tower is open for climbing on select days. Click here for visitor information, or you can reach the museum at (401) 423-3270. A fourth-order Fresnel lens is on display in the museum.

The lighthouse is owned by the Coast Guard and the site is managed by the Beavertail Lighthouse Museum Association. Grounds open, tower open on select days, museum located in keeper's dwellings.


The remains of Whale Rock Lighthouse, which was destroyed in the Hurricane of 1938, are visible from Beavertail Lighthouse.