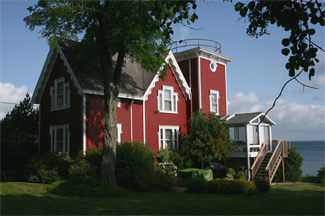 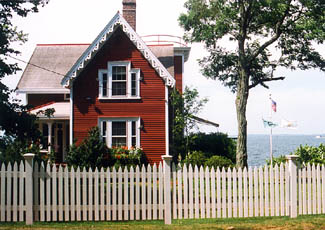 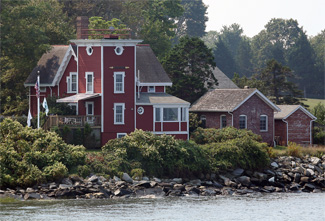 In the late 1800s, the Wickford Rail and Steamboat Company operated a ferry on Narragansett Bay linking Newport on the east side to Wickford on the west. To help its ferry captain safely round the north end of Conanicut Island, which lies in the middle of Narragansett Bay, the company had a private arrangement with landowners on the island to operate a lighted beacon. The steamboat company was apparently the force behind an 1882 petition asking for the government to place an official lighthouse on the site, and two years later, Congress approved $18,000 in funding for that purpose.

The Lighthouse Board purchased a 200-foot strip of land, less than an acre altogether, on the northern tip of the island at a cost of $1,000, but there was a delay in securing the title as a member of the Conanicut Park Land Company, whose signature was required on the title papers, was in Europe.

Work on the lighthouse began in the summer of 1885, with a break near the end of the year to wait out the winter weather. A temporary beacon was put up at that time, but it apparently wasnt good enough to stop the steamer Eolus from running aground on the rocks just west of the lighthouse during a blinding snowstorm. Fortunately, nobody was injured in the incident, and passengers were taken ashore in small boats and put up in local farmhouses.

Conanicut Island Lighthouse was first activated on April 1, 1886. The twelve-foot-square light tower is attached to a wooden, eight-room, two-story, keepers dwelling whose Gothic Revival influences include a steeply pitched roof and a delicate wood trim. A fifth-order lens was originally housed in a decagonal lantern room atop the tower and produced a fixed red light at a height of sixty feet above the bay.

To assist mariners during periods of limited visibility, the station was also equipped with a fog bell that was struck a double blow every thirty seconds. On June 1, 1897, the silent interval between the double-tolling of the bell was reduced to ten seconds, and in 1900, a compressed-air fog siren replaced the bell. The siren was powered by a two-and-a-half-horsepower oil engine and employed a trumpet to direct a constant blast seaward during thick weather. On January 26, 1903, the characteristic of the fog signal was changed to a three-second blast every twenty seconds  likely a welcome change for the stations residents. Besides the lighthouse and fog signal building, other structures at the station included an 1897 barn and a 1901 brick oil house. In 1907, the old fog signal house was moved and replaced by a brick engine house.

Conanicut Island Lighthouse was one of the more attractive posts from a keepers point of view. The station was in a quiet place, yet it was land-based and conveniently close to Jamestown, the nearest town. A keeper didnt even have to leave his house to tend to duties in the lighthouse, and since the lantern was only forty-seven feet above the water, there wasnt the endless stair climbing typical of many lighthouse towers. When assigning such relatively comfortable posts, preference was given to keepers that had previously worked at more remote or dangerous stations. Horace W. Arnold, the first keeper at Conanicut, definitely qualified on those counts.

An eighth-generation descendant of Benedict Arnold, Horace was a native of the area, born and raised on Prudence Island at the north end of Narragansett Bay. An early connection to lighthouses came in 1858 when he married Amy Elizabeth Rathbun, daughter of the keeper of Beavertail Lighthouse. At the time of their marriage, Horace was nineteen and Amy seventeen. In 1861, Horace enlisted in the U.S. Army and fought in the Civil War for three years. He survived the war without serious incident, but ironically was almost killed in a shipwreck on the way home after discharge. Next, Horace enlisted in the Navy for a year, after which he worked on coastal schooners until one he was on sank in Long Island Sound. In 1874, Horace was appointed keeper of Conimicut Light.

Keeper Arnold was famous for an incident that occurred at Conimicut Lighthouse one winter. Heavy ice floes were seriously threatening the lighthouse, and at one point Arnold deemed it prudent to abandon the station. Along with his son, Keeper Arnold seated himself atop a mattress on an ice floe to escape the danger. Captain Sutton of the tug Reliance rescued the two men and later wrote that the keeper appeared to be sitting like a man on a magic carpet. Arnold was frostbitten so badly that it was several months before he could resume his duty at the light station.

The granite Conimicut tower survived the ice, but the keepers house was a total loss, including $319 worth of furniture. Proving that bureaucratic red tape is not a modern innovation, Arnold had to wait five years to be reimbursed. While the house was being rebuilt, Arnolds family stayed at the keepers quarters at nearby Nayatt Point Lighthouse, which had been discontinued with the establishment of Conimicut Lighthouse.

Even in the best of circumstances, Conimicut was not a pleasant place to be stationed, so it was perhaps not surprising when Arnold wrote to the Lighthouse Board in 1880 asking to be transferred to a less exciting station. Six more years passed until he was offered the position as the first keeper at the comfortable and convenient Conanicut Lighthouse. Arnold was keeper at Conanicut for twenty-eight years. Life was not entirely boring there, as evidenced by notes kept by Arnold during his duty. He described a storm in April 1911 as the severest I ever saw in 37 years of keeping light, while another storm was a very hard blow, hardest since I have lived here for the past 27 years.

By the early 1930s, it was decided that the amount of ship traffic passing the northern end of the island did not justify the cost of a manned lighthouse, and Conanicut Island Lighthouse was deactivated in 1933 and its lantern and lens removed. A skeletal tower was erected about fifty feet east of the old lighthouse to support an automated, electrically powered modern beacon, and Keeper Elmer V. Newton, who had been in charge of the station since Keeper Arnold passed away in 1914, was transferred to the light on Prudence Island.

The trend toward automation accelerated during the next few years. By the end of World War II, only thirteen lighthouses in Rhode Island were still manned by keepers  four stations by civilians, the rest by Coast Guard personnel. The skeleton light at Conanicut remained in service until 1982.

The lighthouse and grounds were declared surplus and sold at auction in 1934 to Ida and Mahlon Dunn for $2,874. The structures appearance has changed little since then, though the lighthouse has been painted red for many years instead of its original white. Conanicut Island Lighthouse is listed in the National Register for Historic Places. The station is now a private residence, and neither the lighthouse nor the grounds are open to the public.

For a larger map of Conanicut Island Lighthouse, click the lighthouse in the above map.

As the lighthouse is now a private residence, access to the grounds is restricted and the best views are from the water. To view the lighthouse from the street, take Highway 138 to Conanicut Island, and then take Main Road to the northernmost end of the island. From Main Road, turn left on Summit Avenue and follow it to its end.