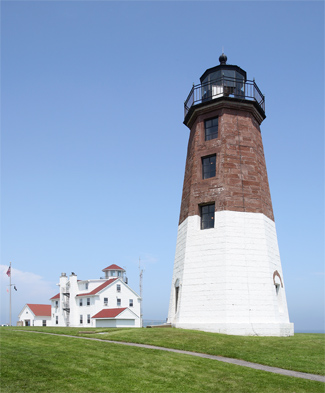 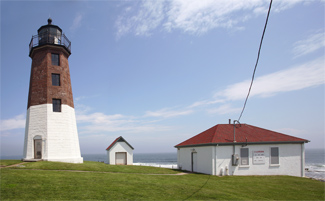 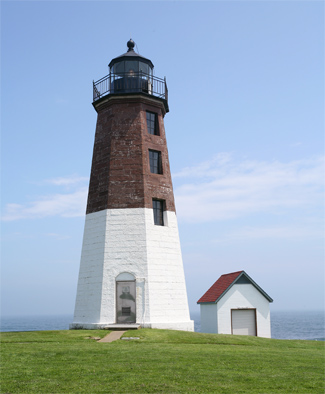 Point Judith protrudes over a mile into the Atlantic Ocean and has plagued mariners since the first European ships visited the continent. Heavy seas and dense fog, which frequent the point, and nearby dangerous shoals such as Squid Ledge have led to the area being one of a number of sites known to sailors as a Graveyard of the Atlantic. The name of the point, which forms the western side of the entrance to Narragansett Bay, is most likely derived from the Tribe of Judah in the Bible, as settlements named Jerusalem and Galilee are located nearby. Although there may have been earlier beacons at the site, the first official U.S. Point Judith Lighthouse was completed in 1810. On February 10, 1808, Congress passed an act that provided $5,000 and read, in part: That the Secretary of the Treasury shall be authorized to cause a good and sufficient light-house to be erected on Point Judith, in the State of Rhode Island, and to appoint the keeper of said light-house, under the Direction of the President of the United States, and otherwise to provide for such light-house at the expense of the United States.

Point Judith Lighthouse, built under contract by Daniel S. Way, was a wooden tower equipped with a spider lamp that burned whale oil. The lighting apparatus rotated on a copper platform that was designed to block out the light briefly every two-and-a-half minutes. A powerful hurricane, known as the Great Gale of September 1815, toppled the wooden tower and damaged several other lighthouses in the Northeast. The accompanying eleven-foot storm surge funneled by Narragansett Bay, destroying some 500 houses and flooding Providence, Rhode Island. John P. Whitford, the first keeper of the lighthouse, survived the hurricane, which claimed at least thirty-eight lives, though the keepers dwelling was damaged.

A replacement tower was constructed at the point in 1816, after Congress provided $7,500 in April of that year. Built of rough granite blocks faced with courses of Connecticut freestone and coated by cement, the octagonal tower stood thirty-five feet tall and was placed in operation on November 16, 1816. The base of the tower was twenty feet wide, tapering to nine feet at the lantern level. Winslow Lewis designed the optic first used in the lantern  ten lamps equipped with eight-and-a-half-inch reflectors and green convex lenses and powered by whale oil. The lamps were divided into two clusters of five, which were set upon two copper tables and revolved by the rotating mechanism salvaged from the old tower. The rotating mechanism consisted of a 228-pound weight attached to a rope that was wound around a horizontal barrel, which was connected to a spindle, on which the lamp tables were mounted, by a wheel and pinion.

An interesting side note is that, according to an 1818 report written by the superintendent of lighthouses for Rhode Island, many of the lighting apparatuses stolen from American lighthouses by the British during the War of 1812 ended up in Bermuda. Through intermediaries, some of those lights ended up in the hands of Winslow Lewis, who reinstalled at least two of them right back into American lighthouses  at Point Judith and at Gay Head on Marthas Vineyard.

As was the case with many old light stations, dampness was a constant problem during the winter, and on occasion ice formed on the lantern panes. Sometimes the keeper had no choice but to wait for the weather to warm up a bit before trying to remove the ice, for fear of breaking the glass in the process.

The early keepers dwelling at Point Judith only had one bedroom, located in the attic, and the keeper and his family reportedly slept in the kitchen during the winter to keep warm. Major repairs and upgrades were applied to both the tower and the keepers dwelling in 1837, and the resulting seven-room residence provided a much more accommodating space for the keeper.

In 1857, a new Point Judith Lighthouse, an octagonal brownstone tower rising sixty-five feet above the water, was constructed, and a new brick dwelling was erected for the keeper and attached to the new tower for convenience of access. A fourth-order Fresnel lens was installed in the lantern room and produced a light visible up to sixteen miles at sea. The lights characteristic was to occult once every fifteen seconds. A stone arch form the second tower that is inscribed with William Ellery, the local customs collector, and 1816, the years of its construction, was placed on the east wall of the new tower, just above the first floor window opening.

The waters off Point Judith were a major route for ship traffic going between various New England ports and New York. By the early 1870s, mariners were formally requesting that the foghorn at Point Judith be changed to a fog whistle, saying that the old signal, an 1867 third-class Daboll trumpet sounded by a Wilcox caloric engine, was often drowned out by the pounding surf. After Congress provided $5,000, a first-class steam siren was installed at Point Judith, but ships continued to become stranded at the point.

When the stations first fog signal was added in 1867, an assistant keeper was hired to help with the extra workload. The fog signal was in operation for approximately 600 hours a year, but during the year ending June 30, 1895, it sounded 934 hours, which is equivalent to roughly eleven percent of the time. In 1902, new first-class sirens powered by a pair of sixteen-horsepower engines and compressors were installed at the station.

A New York Times article in August 1889 noted that veteran lighthouse keeper Capt. Joe Whaley had just severed his connection with the station at Point Judith after twenty-seven years and three months of service. The Sunday prior to his retirement, over 275 people and 70 wagons had visited the lighthouse and fog sirens. It wasnt the throngs of visitors that prompted his decision to retire but rather 375 hours of incessant fog during May and June. Henry A. Whaley, who had been serving as assistant keeper for thirteen years, succeeded his father and remained at Point Judith until 1910.

Perhaps this casualty list shouldnt be too surprising, given the amount of ship traffic in the area  in 1907, lighthouse personnel counted 22,860 ships passing by during daylight hours. This was four times the number of vessels entering New York Harbor that same year. In 1906, a bill was introduced in Congress to station a lightship offshore from Point Judith, in addition to the lighthouse. The proposal was dropped two years later in the face of opposition from the Lighthouse Board, which insisted that the lighthouse was sufficient.

As an additional aid to mariners during periods of limited visibility, a class C radiobeacon was established at Point Judith in November 1931. This was the first radiobeacon to be established at a Rhode Island lighthouse. The two sixty-foot towers used to transmit the radio signal were taken down in 1974, after they were deemed unsafe.

The great hurricane that hit New England in September 1938 destroyed 250 feet of the seawall around the light station. In some places, the storm removed as much as thirty feet of shoreline, but the lighthouse survived unscathed.

Various changes and additions were made to the station over the years. The present lantern room was installed in 1869, and in the spring of 1899, the top half of the tower was painted brown to give the lighthouse a distinctive daymark. A new fixed, fourth-order Fresnel lens was placed in operation on January 2, 1907, likely replacing a revolving lens of the same order. A brick oil house was added in 1917, and the still-standing, hip-roofed fog signal building was built in 1923. The Coast Guard building that stands today near the lighthouse was constructed in 1937, replacing an earlier lifesaving station. Point Judith Light Station was automated in 1954, and the keepers house was torn down that same year.

In 2000, the lighthouse underwent its first major renovation in over a century. A temporary beacon was put in place while the lantern room and Fresnel lens were removed for refurbishment. Some of the original brownstone blocks had to be replaced during the restoration effort that lasted four months.

Point Judith Lighthouse was selected as one of five lighthouses to appear in 2013 on a set of stamps issued by the U.S. Postal Service called New England Coastal Lighthouses. The stamps are part of a series that has covered lighthouses in different regions of the country. An unveiling ceremony was held at each of the five featured lighthouses on July 13, 2013.

For a larger map of Point Judith Lighthouse, click the lighthouse in the above map.

From the intersection of Highways 1 and 108 south of Narragansett, follow Highway 108 south to the Coast Guard's Point Judith Station. Though the lighthouse is on an active Coast Guard Station, public access to the grounds is typically possible through an open gate that connects to the parking area just north of the station. As of 2013, it appears the grounds are no longer accessible.


Point Judith Lighthouse, along with several other sites in the vicinity, appears in the movie Dan in Real Life. When Dan has to escape the embarrassing situation he has created at his family's summer home, he takes his youngest daughter, the only one who will go with him, and a niece and a nephew on a short drive. Finding the bowling alley closed, they end up at Point Judith Lighthouse where Dan asks the kids, "Do you know why we have lighthouses?" One of the youngsters responds, "Because they're neat?" To which, Dan answers, "That's right. Yes, and also because they help when its dark out. They uh help keep boats safe and keep us from crashing into the rocks because when you're out there, and you're being tossed back and forth by those big dark waves and you think that you'll never feel land again and that you can just split into a million pieces and sink down all the way down deep. It's the light that keeps us on course. It's the light."

That quote has to be my favorite in the movie along with when Dan's weeping daughter Cara screams out, "YOU...ARE A MURDERER OF LOVE!"