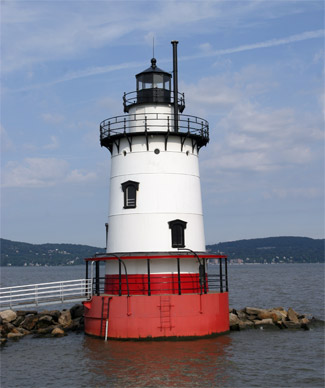 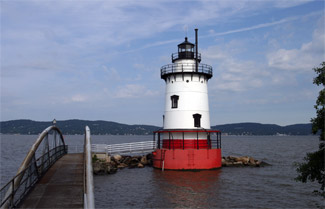 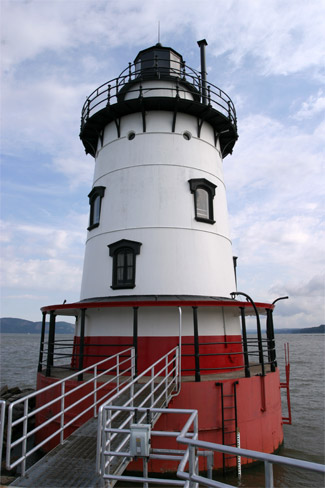 In response to steamship concerns regarding the dangerous shoals on the eastern shore of the Hudson River just north of New York City, Congress authorized the building of a lighthouse in 1847 on Tellers Point, a short distance upstream from Sing Sing Prison. Officials, however, soon changed their mind and selected a site a few miles south at Tarrytown Point instead. The customs collector at New York was charged with purchasing land at Tarrytown Point, but after consulting pilots and captains of local steamboats during the summer of 1848, he learned that the best site for the light would be on Beekmans Point, not too far from Tarrytown Point.

Gerard Beekman, the owner of the point that shared his name, first declined to sell any portion of the point as a lighthouse would depreciate the value of his land for building country residences, but after considerable delay, he finally consented to sell two acres at the outer end of the point for $3,000. This amount was unacceptable as the total amount appropriated for the lighthouse was $4,000.

On April 11, 1849, the State of New York passed the following law: The United States are hereby authorized to erect or cause to be erected, in the Hudson river, at a point in the vicinity of Tarrytown Point, at such distance from the shore that the water at the time of ordinary low water mark, shall not exceed two feet in depth, a beacon light for the purpose of securing the safety of vessels navigating the said river. Though the necessary land was now free, the cost of building an offshore lighthouse exceeded the amount authorized by Congress.

For thirty more years, river captains continued to petition for a lighthouse to mark this stretch of the Hudson River, and in 1881, the government finally relented, providing $21,000 to construct an offshore lighthouse. The spark plug tower was manufactured by G.W. & F. Smith Iron Company of Boston, Massachusetts, and is known officially as Tarrytown Lighthouse.

Captain Joseph Ackerman lit the light for the first time on October 1, 1883, a ceremony he would repeat many times during his twenty-one years of service at the rock-rimmed cast-iron tower. The forty-eight-foot-tall conical tower consists of five levels and rests atop a circular iron pier, which is twenty feet high with a diameter of thirty feet and was filled with cement and sunk in seven-and-a-half feet of water. The first level, with a diameter of eighteen feet, served as a combination kitchen/dining room/living room. Bedrooms were located on the next two levels, while the fourth level was split into two rooms, a bedroom and a small storeroom. The fifth level housed the mechanism for striking the fog bell, and the decagonal lantern room topped it all off.

The only surviving caisson-style lighthouse on the Hudson River, Tarrytown Lighthouse housed a fourth-order Fresnel lens, which originally exhibited a fixed white light characteristic from a focal plane of fifty-six feet. The characteristic was switched to fixed red on September 30, 1893, and then in 1902, it was changed to flashing red through the installation of a different Fresnel lens.

For most of its existence, the paint scheme used on the lighthouse has been a white tower, with a red pier, and a black lantern, but for a brief period the tower was painted brown, as shown in this photograph.

Tarrytown Lighthouse was considered a plum assignment due to its proximity to town. During its seventy-eight years of manned service, the keeper position only rotated twelve times. Household supplies were obtained by rowing to town, or once the river froze over, by carefully crossing on the ice.

Keeper Ackerman resigned as keeper in the fall of 1904, after having served twenty-one years at the lighthouse, as the duties had become too heavy for a seventy-seven-year-old man. Besides his wife, Ackerman had three cats, a dog, and two dozen chickens to keep him company at the lighthouse. Sometimes the chickens, which were good layers, would fall overboard, but the attentive keeper was always quick to retrieve them. In addition to saving his chickens, Keeper Ackerman was also credited with rescuing nineteen people from drowning during his service at the lighthouse. Prior to becoming keeper, Ackerman worked on boats for twenty-one years and was one of the best-known captains on the Hudson River.

General Motors enlarged its automobile plant along the river in 1923, altering the course of the Pocantico River. Slowly, the east shore of the Hudson River expanded westward until only fifty feet separated the lighthouse from the shoreline.

John A. Brown, keeper of Tarrytown Lighthouse during the 1920s, was recognized for rescuing several people in distress near the lighthouse. In 1922, he towed a leaking skiff, loaded with three ladies, a man, and a child, to the station and repaired the boat. On June 28, 1925, Brown rescued two men from drowning, and on June 29, 1929, he went to the aid of the cruiser Tink, which had become disabled near the rocks at Kingsland Point.

Tragedy touched Tarrytown Lighthouse twice in 1947, claiming the lives of two children. In October of that year, seven-year-old Andrew Leclerc, son of Keeper Laureat Leclerc, was playing with a boat near the base of the lighthouse when he disappeared. Keeper Leclerc and an older son were polishing fittings inside the tower and would call out to the youngster from time to time to make sure he was okay, but around 4 p.m., the boy didnt answer. Police were called after a frantic search of the lighthouse, and the boys body was eventually found in the river ten feet from the tower. Keeper Leclercs wife had died in March and his sixteen-year-old daughter Marie had married in June, leaving the keeper alone to look after the light and his other children.

In August 1947, four-year-old Russell W. Scarlett drowned at the lighthouse while his father was serving as a relief keeper. Mrs. Scarlett saw Russell and his five-year-old sister Betty Ann fall off the dock and into the water, but with a baby in her arms, all she could do was call for her husband, who dove into the river and was able to retrieve Betty Ann but couldnt locate Russell. A man later found the boys body off Kingsland Point Beach.

Richard Moreland, the last keeper to have his family with him at the lighthouse, served from 1955 to 1958, living at the station with his wife and two daughters, who were born during that period. In December 1955, Keeper Moreland escorted his wife Agnes to shore so she could do some Christmas shopping, but when he tried to return to the lighthouse, heavy ice floes blocked his boat. Keeper Moreland had left their three-month-old baby at the lighthouse and a pot simmering on the stove, thinking he would be gone just a couple of minutes. Panic-stricken, Keeper Moreland went for help, and the local police recruited two experienced boaters to attempt the trip.

By this time, the wind was blowing nearly fifty miles per hour, and to make matters worse, the propellers shear pin broke. While one man rowed, the other replaced the pin with a nail he found in his pocket. By the time the two men safely delivered Keeper Moreland to the lighthouse and made another trip to drop off Mrs. Moreland, they and their boat were covered with ice. Each of the two men received a citizens award and medal for their Christmas-time service.

In June 1956, Edward Murrow, host of the popular television program Person to Person, conducted a remote interview with the Moreland family to see what the keeper did to keep house in the lighthouse. The Morelands enjoyed their time at the lighthouse even though one of them always had to be at the station and it was difficult making square furniture fit in round rooms. Richard Moreland resigned from lighthouse keeping in February 1958 to become an insurance salesman.

When the Tappan Zee Bridge was completed in 1955, Tarrytown Light was no longer needed. Its candlepower was reduced from 7,000 to 1,500 in 1957, and the inevitable deactivation occurred in 1965. The lighthouse was listed for disposal and fell into disrepair.

On October 1, 1983, the 100th anniversary of the beacons first lighting, Tarrytown Lighthouse was opened to the public. Today, Westchester County occasionally conducts tours of the lighthouse, treating visitors to furnishings and photographs depicting life at the lighthouse.

As part of an $800,000 project, funded by Westchester County and the Village of Sleepy Hollow, the lighthouse was to be stabilized, have its wooden floors replaced, and receive a new coat of paint, however, when the project went out for bid in 2013, the lowest received bid was $1.2 million. The restoration has been placed on hold until additional funds can be raised.

On June 10, 2015, a dedication ceremony was held for a replica fourth-order Fresnel lens recently installed atop Tarrytown Lens. The lens, crafted by Artworks Florida, cost $35,000 and was purchased by a mix of grant money and private funds, including a donation by Edge-On-Hudson, a master-planned community planned for the old General Motors property located near the lighthouse. In speaking at the ceremony, Ken Wray, mayor of the Village of Sleepy Hollow, said, This new light is a first step towards our intended goal of full restoration of this historic lighthouse. The new light also signals a new era for the Village of Sleepy Hollow, which has been working towards the start of waterfront development at the former General Motors factory site adjacent to the lighthouse, virtually since the factorys closing in 1996.

For a larger map of Tarrytown Lighthouse, click the lighthouse in the above map.

From Tarrytown, continue north on Route 9 to Sleepy Hollow. Turn west (towards the river), at Pierson Avenue, which will become Bellwood Avenue, and continue to Palmer Avenue. Turn left onto Palmer Avenue and continue to Kingsland Point Park. The lighthouse is near the southern end of the park. The lighthouse is open to the public on several occasions during the summer months. Call (914) 366-5109 for exact dates and to make a reservation.

The lighthouse is owned by Westchester County Parks. Tower closed.