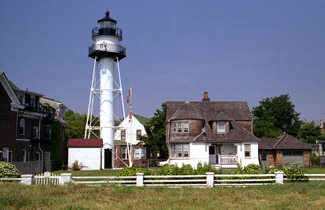 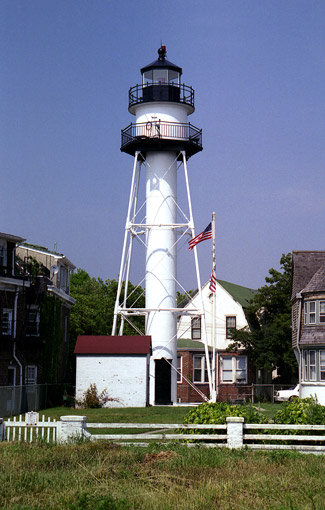 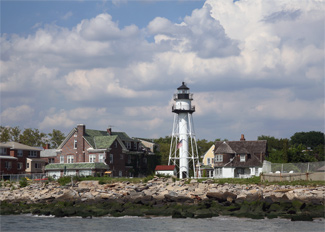 Coney Island has seen many flashy and amusing fads come and go over its long history, and its name conjures up images of crowded beaches, cotton candy, and roller coasters. Probably few in those crowds ever noticed Coney Island Lighthouse sitting quietly nearby, faithfully tended for many years by Frank Schubert, the last civilian lighthouse keeper in the United States.

During the mid-1800s, Coney Island attracted a lot of notable people, including P.T. Barnum, Herman Melville, Washington Irving, and Daniel Webster, but the west end of the island, where the lighthouse was to be built, attracted quite a different crowd, and was a very rough area known for its drinking, fighting, and gambling. It wasnt unusual for bodies to wash ashore on Coney Island during those times.

The growing popularity of Coney Island meant that a lighthouse was needed to guide steamers headed for the islands piers and also to direct garbage barges to their nearby dumping grounds. In 1889, Congress approved $25,000 to build two range lights at the western end of Coney Island. When the Lighthouse Board tried to buy the necessary land, the property owners asked for twice the estimated value of the land, and the property was condemned instead and obtained for $3,500.

A contract for the metalwork for the rear light tower was made in January 1890, and two months later, work began on the erection of the tower, the front beacon, the fog signal, and the keepers dwelling. The original rear light, a square, skeleton tower with a central steel column containing eighty-seven steps, remains standing. This tower is identical to the former lighthouse at Throgs Neck. In fact, they literally took the plans for that tower, crossed out Throgs Neck and wrote Coney Island above it. The tower stands roughly sixty-one feet tall, with an eight-sided lantern room at the top, and marks the rocks of the appropriately named Gravesend Bay at the Narrows, the entrance to Upper New York Bay. The front light consisted of an eighteen-foot-tall, square, wooden tower, standing on four concrete footings.

The accompanying keepers dwelling was also copied from another station, in this case Gould Island Lighthouse in Rhode Island. Once again, they took the plans, crossed out the word Gould, and wrote in Coney. The building had two floors, plus a cellar and an attic. A shed was attached, via a covered walkway, to one side of the building, and a water cistern was built in back. A gravel path led to the shoreline, connecting the dwelling, the lighthouse tower, and the fog bell building.

The original beacon in the rear tower, first lit on August 1, 1890 by Keeper Thomas Higginbotham, was a fourth-order Fresnel lens powered by kerosene, showing a flashing red light. That lens was removed when the station was automated in 1989, and is now on display at Coast Guard Headquarters in Washington D.C. The beacon casts a beam seventy-one feet above sea level, and is visible for over fourteen miles.

In 1896, the front range tower, no longer needed, was taken to the general lighthouse depot on Staten Island, and the land on which it stood was sold at public auction on July 6, 1896.

During a heat wave in July 1910, fifty-year-old Keeper Higginbotham, who before arriving at Coney Island had served at Execution Rocks Lighthouse, was with a picnic party aboard the Staten Island Ferry, when he was overcome by the heat and died. Ernest J. Larsson cared for Coney Island Lighthouse for a few days before Gilbert L. Rulon was placed in charge of the light in mid-July.

The dredging of Ambrose Channel in the early 1900s changed the course of the currents near Coney Island, and the land in front of the station began to erode. In 1914, a house 250 yards east of the lighthouse was washed away, prompting the construction of a 600-foot-long stone wall the following year. Six months after it was finished, a large storm undermined much of the wall. During a storm in April 1918, the north corner of the lighthouse reservation was cut away, and the fog bell house toppled into the water. The bell and striking apparatus were recovered, and a new skeletal fog bell tower was built and surrounded by several tons of riprap.

In 1921, the Lighthouse Service noted a serious problem at Coney Island Lighthouse:

This reservation is located on Sea Girt property at Nortons Point, west end of Coney Island. It was purchased in 1889, at which time there were no other buildings or roads in the vicinity, but since then the surrounding property has developed in such a manner as to give the lighthouse reservation no street front and no other means of egress for the occupants. A right of way is urgently needed to meet a bad situation and can only be obtained by the purchase of property priced at $5,000.

The issue was raised the following two years before a right-of-way was apparently purchased.

Adrien Boisvert and his wife Alice, both natives of Quebec, were transferred to Coney Island Lighthouse in 1941 from Fire Island Lighthouse to replace Keeper Herbet Greenwood, who had been in charge of the light for twenty-three years. In an interview for a newspaper article in 1953, Keeper Boisvert dismissed the romantic notion of the life of a lighthouse keeper by explaining how his need to shuttle between the fog bell and light tower left little time for philosophic contemplation, especially with the added responsibility of looking after his seven children. Several times a night, Keeper Boisvert had to climb the corkscrew staircase inside the tower to wind up the 150-pound weight that caused the lens to rotate. When Adrien did take time out to attend a church meeting, his wife had to staff the station. Family excursions away from the lighthouse were a rarity.

Cecile Boisvert, the middle of the seven Boisvert children, fondly remembered her time on Coney Island. To earn money for buying Christmas presents for her siblings, Cecile was paid five cents every time she wound up the weight in the lighthouse. Another way to earn a few cents was by helping her neighbors. We lived in an all-Jewish community, Cecile recalled. Some of the people were Orthodox Jews. Because of certain religious customs or beliefs (on the Sabbath) they could not touch money or anything electric, or the stove. So on Saturday mornings we would go to their houses and turn off the lights and turn off the stove and they would have five cents in a dish waiting for us that they had put there on Friday.

The last civilian keeper at Coney Island Lighthouse was Frank Schubert, who began his lighthouse career in 1938 aboard the buoy tender Tulip. He followed that with time at the offshore Old Orchard Lighthouse, and then was assigned to the Army Transportation Service during World War II. After the war, he served as the keeper of three lights at Governors Island, while his wife, Marie, and their three children lived on Staten Island.

In 1960, Schubert gladly accepted an assignment to Coney Island Lighthouse as his family would finally be able to live with him. When interviewed by a New York Times reporter, Mrs. Schubert explained Weve gone from one extreme to another. We never used to see Frank. Now he never leaves home. Keeper Schuberts duties included tending the light and the 1,000-pound fog bell, which he would activate when he could no longer see Hoffman and Swinburne Islands. In an emergency, or if the power went out, Schubert said that the fog bell would be hit with a sledgehammer.

Schubert had other talents and hobbies to keep him busy, including golfing, bowling, cooking, and woodworking, among others. Even with all that, the family apparently seldom left the station; in a 1986 interview, Schubert said, We havent been to the movies since 1946, and we havent taken a vacation in 20 years.

When the station was automated in 1989, Keeper Schubert, whose wife Marie had passed away in 1986, was allowed to stay on as a caretaker, and he continuing to climb the eighty-seven steps to the lantern each day to perform required maintenance duties. During his years of service, Schubert was credited with saving the lives of fifteen sailors and was invited in 1989 for a visit to the White House by President George H.W. Bush. Schubert and his dog, Blazer, remained on duty until December 11, 2003, when Schubert passed away at the age of eighty-eight as the last of the countrys civilian lighthouse keepers. His lighthouse career had lasted sixty-five years, including forty-three years at Coney Island Lighthouse.

The Coast Guard mourns the loss of its most courageous sentry of the sea, said Captain Craig T. Bone, commander of Coast Guard Activities New York, after Schuberts passing. His devotion to duty and courage are unequaled.

For a larger map of Coney Island Lighthouse, click the lighthouse in the above map.

In Coney Island, take Surf Avenue west to the gated community of Seagate, and ask permission at the gate to see Coney Island Lighthouse. The lighthouse is located between B47 and B48 Streets off Surf Avenue. Please note that several people have reported being refused admittance to the neighborhood in recent years due to security concerns.

The fourth-order Fresnel lens used in the lighthouse is now on display at Coast Guard Headquarters in Washington D.C.

The lighthouse is owned by the Coast Guard and licensed to the Seagate Association. Grounds/dwelling/tower closed.


The family of Keeper Frank Schubert have established a website to honor his years of service at Coney Island Lighthouse, and they are also trying to obtain the lighthouse when it is excessed by the Coast Guard. If successful, the family would open the lighthouse to the public. Given the care the Schubert family has given to the lighthouse and grounds over the years, they would certainly be great stewards of the property.

This YouTube video entitled The Last Lighthouse Keeper of Coney Island was released in 2014 by two Columbia graduate students.