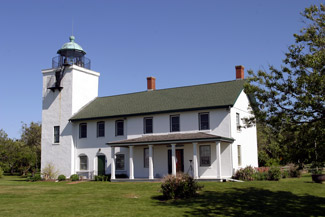 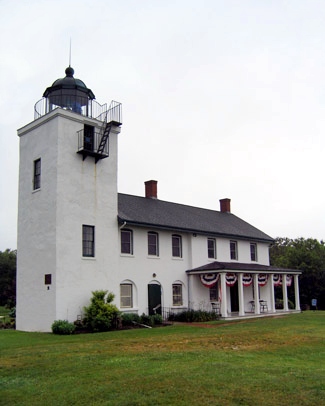 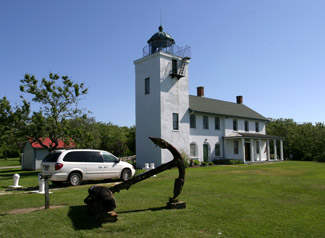 In February 1756, twenty-five-year-old George Washington left Virginia on horseback, headed for Boston. Following a recommendation by a Dr. Alexander Hamilton of Baltimore, young Washington rode across Long Island, intending to board a Boston-bound boat in Greenport. While in Southold, he made the acquaintance of one Ezra LHommedieu, who would later become a Revolutionary War hero. Among other matters, the two discussed the suitability of Southolds Horton Point and Long Islands Montauk Point as possible sites for a lighthouse.

In 1838, Lt. George Bache noted that placing a buoy on the northern extremity of the shoal from the westward of Hortons point, would be prudent as vessels not unfrequently ground here. In 1853, a local ship captain named William Brown wrote to the Lighthouse Board, saying that a fixed light upon Hortons point would be of great value to those who navigate the Long Island sound, supplying, as it would, the existing deficiency of lights upon the Long Island shore between Old Field Point light and Plum Island light.

Congress finally allocated $4,000 in 1854 for Horton Point Lighthouse, but after the Lighthouse Board declared that amount wholly inadequate, $3,500 more was added to the budget two years later. Meanwhile, in 1855 a portion of the Cliff Lot was obtained, after much negotiating, for $550, and construction on the lighthouse began under the supervision of William Sinclair, a Scottish immigrant. The Cliff Lot was part of a 1640 land grant awarded to Barnabas Horton, the points namesake. For the duration of the project, Sinclair boarded at the home of John Booth, and later married Booths sister, China. Sinclair remained in Southold, accepting an appointment as the first keeper of Horton Point Lighthouse on June 4, 1857 at an annual salary of $400.

The station consisted of a fifty-five-foot-tall, ten-foot-square tower and a separate, two-story keepers residence, both built of New England granite and local bricks and lumber. The domed roof above the ten-sided, cast-iron lantern room sported decorative rainspouts shaped like gargoyle heads. Sinclair reported the cost of the project as $12,412. The first optic was a third-order Fresnel lens, manufactured by L. Sautter & Company, which beamed forth a fixed white light at a focal plane of 110 feet above Long Island Sound for the first time on October 12, 1857.

In 1870, the station underwent major renovations. Extra rooms were built for the assistant keeper between the tower and the dwelling, along with a room for lighthouse supplies. The brickwork of the tower and dwelling, which was found to be badly decayed due to the action of the atmosphere and frost, was covered with a coating of Portland cement. A cast-iron lantern deck was installed atop the tower, and the original lens, which was originally part of a revolving apparatus, was replaced by a fixed lens of the same order.

Only nine head keepers served at Horton Point Lighthouse throughout its history, with George Princes tenure of nineteen years being the longest. After distinguished service in the Civil War, George Prince was appointed assistant keeper at Horton Point in 1871 and then promoted to head keeper in 1877, replacing Daniel Goldsmith. In early 1896, a warrant was issued for the arrest of Keeper Prince for having taken part in the serenade given to two newlyweds. When the newlyweds were found absent from their home, the men tied a cow in the couples kitchen, placed pigs in the dining room, and filled the parlor with fowls. Later that year, Keeper Prince was dismissed for drunkenness and neglect of duty.

Canadian-born Robert Ebbitts became the seventh keeper when he was transferred to Horton Point from Cedar Point Lighthouse to replace Prince in 1896. After painting the towers stairway in 1903, Keeper Ebbitts was using a ladder to access the lantern room to light the lamp, when a rung broke and the ladder collapsed, causing Ebbitts to fall thirty-five feet to the ground. With his left leg broken in two places and his ankle crushed, Ebbitts requested that Stella Maria Prince, the daughter of Keeper George Prince, be appointed acting keeper while he recovered, and for a few months, Stella became the only female head keeper the station ever had.

After Ebbitts returned to active duty, his previously spotless record received a couple of black marks. In 1907, he was admonished by inspectors for leaving greasy rags in the lantern and watch rooms, a severe fire hazard. In 1908 an inspection report read, The Board notes that you have before been warned for neglect of duty, but it appears that this warning was unheeded. If future inspections of your station do not show better results, the Board may be called upon to take more drastic measures than reprimanding you. Ebbitts must have complied with the warning as he retained his position at Horton Point until 1919.

The light source was changed in 1907 to an incandescent oil vapor lamp, which greatly increased the lights power. A forty-foot steel skeleton tower showing a flashing green light was erected near the lighthouse in 1933, and the lighthouse went dark. A local paper reported on the change: In place of the old, friendly, white light, a new brilliant green light of 100,000 candle power cast its brighter rays over the Sound. The new beacon, which the Federal Government has placed at Horton Point, is the latest automatic type and requires no Lighthouse Keeper.

The property was leased to the Southold Park District later in 1933, and in 1937 the site was officially conveyed to the town with the condition that the government could repossess the property if needed. This did indeed happen shortly after the United States entered World War II, when a Civilian Defense Corps manned the lighthouse as a lookout.

The lighthouse sat abandoned following the war and suffered damage at the hands of conscienceless vandals. The neglected lighthouse was almost razed, but the Southold Historical Society and Matt Booth, a member of the Southold Park District commission, stepped in to save the historic edifice. Restoration work commenced in the 1970s, and a nautical museum established in the dwelling opened to the public in 1977.

Since 1990, the lighthouse has been jointly maintained by the Southold Parks District and the Southold Historical Society. During that year, the two groups cleaned and repainted the tower, built a new stairway, replaced the lantern glass, and made other necessary repairs and improvements. On June 9, 1990 the skeleton tower was removed and the lighthouse was relighted and returned to active service. Further renovations and improvements were made throughout the 1990s.

Horton Point Lighthouse is listed in the National Register of Historic Places and is a popular site for locals and tourists alike. The grounds are open year round, while the lighthouse itself is open seasonally. The fine museum inside Horton Point Lighthouse displays a fourth-order Fresnel lens, a lamp and several brass instruments used in lighthouses, and the DCB previously used in the lantern room.

For a larger map of Horton Point Lighthouse, click the lighthouse in the above map.

From Highway 25 in Southold, turn north on Youngs Avenue and continue for just over a mile until it ends at Old North Road. Turn right on Old North Road, and then make a quick left on Lighthouse Road, which will lead you to the park and Horton Point Lighthouse.

The lighthouse grounds are open daily between 8 a.m. and dusk, however, the museum inside the lighthouse is only open on weekends from 11:30 a.m. to 4 p.m. between July 3 and mid-September. Call (631) 765-5500 for more information. Note that parking for the lighthouse is problematic.