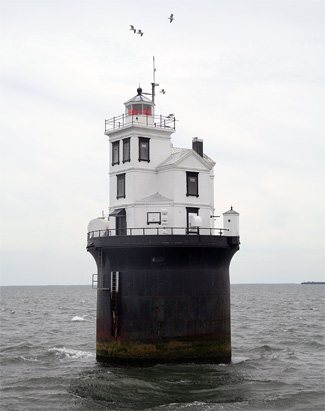 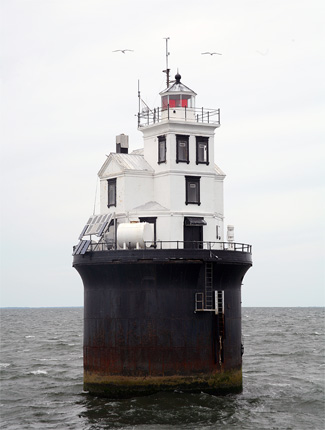 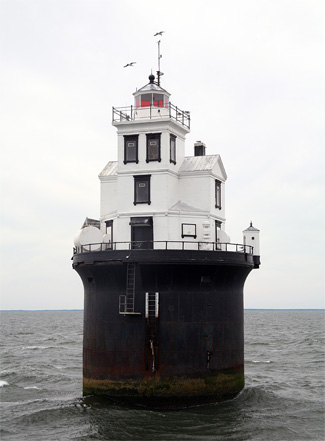 The above paragraph was included in the Annual Report of the Lighthouse Board for 1875. After Cross Ledge Lighthouse was completed in late 1875, lightship LV 19 was withdrawn, repaired, and then redeployed the following summer at Fourteen Foot Bank, which is an oval shoal situated three-and-a-half miles from the Delaware shore and just over ten miles northeast of Mispillion Creek. During the winter, heavy ice floes often forced LV 19 to abandon its post and seek refuge behind Delaware Breakwater. Noting that the importance of this station was second to none in Delaware River and Bay, the Lighthouse Board recommended in 1878 that a light-house should be built on the lower end of Joe Flogger Shoal to replace LV 19. Though the estimated cost would be a hefty $150,000, the required maintenance expense would be less than that of the lightship.

The pneumatic-caisson method of sinking a lighthouse foundation into a seabed had been used at Michigans Waugoshance Lighthouse in 1867, and the Lighthouse Board decided to accept the recommendation of lighthouse engineer Major W.H. Heur to use this novel technique for Fourteen Foot Bank Lighthouse. Test borings at the site were made in July 1884, and an iron pile was placed to mark the position of the planned lighthouse. A $38,900 contract for putting the cylinder in place was awarded to Messrs. Anderson and Barr, who began their work in May 1885. On July 5th, a wooden caisson mounted beneath three, six-foot-tall courses of the foundation cylinder was towed to the bank and sunk into place by letting water into it. The water was then pumped out of the structure, and an air compressor was employed to pressurize the caisson and attached air-shaft. Working inside this water-tight compartment, three gangs, of eight men each, labored in eight-hour shifts for a daily salary of $2.

The interior space was lit by paraffin candles, allowing the men to shovel the sand out from the cutting edge of the caisson. The accumulated sand was blown to the surface through a four-inch pipe. When the stoppers were removed from both ends of the pipe, the sudden decrease in pressure caused severe condensation in the chamber. The atmosphere became so foggy that the men could only see a few feet, and the blowing of the sand had to be limited to short fifteen to thirty-second bursts. The caisson would typically sink one to two feet a day, and as the cylinder disappeared into the shoal, additional courses were bolted in place above and then filled with cement. On August 28, the required depth of thirty-three feet, four inches below the original surface of the shoal was reached, and the caisson was subsequently packed with sand.

The contractors moored the old 200-foot-long steamer Moro Castle at the construction site with six anchors, and its massive deck was used to store machinery, sand, broken stones, timber, a kitchen, and quarters for the workers, while coal, cement, and sections of the cylinder and air shaft were placed below deck. Secured amidships was a boom derrick capable of lifting two tons and reaching out thirty feet. Shortly before work on the foundation was complete, the Moro Castle parted her moorings and started to drift toward the cylinder. To lessen the impending impact, a couple of alert workers dropped fenders over the side of the cylinder. When the vessel struck the foundation, the joints between the plates of iron on which some men were sitting opened up and latched on to a couple of the mens trousers. Not wanting to be left homeless, the men decided to slip out of their pants, which held them fast to the cylinder, and leap on board the errant ship.

Concrete was poured to within thirteen feet, eleven inches of the top of the fluted cylinder, and the remaining space was reserved for Ericsson engines, a Daboll fog trumpet, fuel compartments, and cast-iron water tanks. Due to the lateness of the season, the work of finishing the cellar was postponed until the following year, and a two-room, frame house was built inside the cylinder to house two keepers who would mind a makeshift beacon that winter. A temporary platform was placed over a portion of the cylinder to support a fourth-order lantern, taken from the east end of the Delaware Breakwater, whose light was first exhibited on the night of October 24. During that first winter, the two keepers were instrumental in saving the crew of the tug Buelton that had been sliced open and sunk by floating ice.

The superstructure was to be put in place the following summer, but due to delays in fabricating the metal pieces, this work was not even started until October. Day laborers were employed to finish the cellar story atop the foundation cylinder during a six-week period starting at the first of August.

The habitable portion of the lighthouse consists of a two-story, cast-iron dwelling, fabricated by Messrs. H.A. Ramsay & Son, of Baltimore and surmounted by a square tower supporting an octagonal lantern room. Built in a Classical Revival style, the dwelling has three gables, one directly behind the tower and one to either side. The stations privy resembles a guard shack and is cantilevered over the edge of the foundation cylinder permitting waste to drop directly into the bay. The project came in under budget at $125,000, and a surplus of $50,000 was returned to the treasury.

Fourteen Foot Bank Lighthouse was activated for the first time on April 10, 1887, exhibiting a white light with red sectors covering the dangerous Brown and Joe Flogger Shoals, though finish work continued through September 10, 1887, when the stations fog signal was placed in operation. In 1892, the characteristic of the light was changed from flashing every fifteen seconds to fixed for a period of forty seconds duration, followed successively, by an eclipse of three seconds, fixed period of fourteen seconds, and an eclipse of three seconds.

James C. Jones was appointed the first head keeper of the lighthouse and served in this capacity until his passing in 1895. In June 1911, Assistant Keeper Lewis F. Robinson committed suicide at Fourteen Foot Bank by drinking carbolic acid. His companion at the lighthouse heard Robinson cry for help after downing the liquid, but all he could do was watch Robinson die in agony, after expressing remorse for his act. The previous December, Keeper Robinson broke his ankle at the lighthouse and had to wait two weeks before being able to get off the station and receive medical attention. A newspaper article reporting his death conjectured that the sufferings he endured while ill affected his mind and that led him to commit the rash deed.

Fourteen Foot Bank was the first assignment in the lengthy career of Chester P. Joseph. During the winter of 1917-1918, Keeper Joseph was stranded at the station for three straight months, as heavy ice floes prevented any relief from reaching the lighthouse. Joseph and the other marooned keeper busied themselves with every conceivable task, but life soon became monotonous. The ice fields that occasionally banged against the foundation did provide some excitement, as they would cause any unsecured item on a table or countertop to slowly migrate to the edge and fall off. After the ordeal, Joseph confessed, I dont believe I ever was as tired looking at one person in my life.

On November 15, 1931, a party of three female high school teachers and five young men from Millville, New Jersey became lost in their motorboat during a thick fog. After exhausting their supply of food and water and nearly their fuel, the group made it to Fourteen Foot Bank Lighthouse the following day by following the sound of its foghorn and was welcomed aboard by its keepers. An intensive search for the missing boat had been launched by the Coast Guard, but it wasnt until a relief keeper was brought to the station on November 17, that news of the groups whereabouts made it to shore. Later on the 17th, a Coast Guard vessel took the group off the lighthouse, and with their motorboat in tow, returned them to Millville.

The final Coast Guard crew left Fourteen Foot Bank Lighthouse in 1973, after which an electric cable stretching to the mainland supplied the power for the automated light. Back-up diesel generators were housed at the station in case commercial power was interrupted. Later, the light was solarized, and the fourth-order, Henry-Lepaute Fresnel lens removed from the lantern room.

In 2000, the Coast Guard loaned the historic lens to the Lewes Historical Society, and it is currently on display inside the societys Maritime Museum housed inside the Cannonball House, so named due to the cannonball fired during the Bombardment of Lewes that is permanently lodged in the building.

Besides continuing its primary role as an aid to navigation, Fourteen Foot Bank Lighthouse also serves as a base for the Delaware Bay Observing System run by the University of Delawares College of Marine Studies. Sophisticated monitoring equipment continually collects weather and oceanographic data that is relayed to the universitys campus for use in predictive modeling.

In 2005, the lighthouse was excessed by the Coast Guard and offered to qualified government entities or nonprofit organizations under the National Historic Lighthouse Preservation Act of 2000. The American Lighthouse Foundation, which has a proven track record in lighthouse preservation and was committed to allowing the University of Delawares work to continue, applied for Fourteen Foot Bank Lighthouse, but its application was rejected. Instead, the lighthouse was placed on the auction block on July 16, 2007 and was finally sold on September 4, 2007 for $200,000. The new owner, Michael L. Gabriel, plans to use the lighthouse, along with Chesapeake Bays Bloody Point Lighthouse that he purchased in 2006, as a summer residence.

In August 2009, Gabriel announced that he would be dedicating a room in each of his offshore lighthouses to a brewery. Im starting this process with Bloody Point and Fourteen Foot before moving on to Borden Flats, Gabriel explained. Were not talking about a huge amount of beer here, something like 20 to 40 barrels a week that we will look to sell to local restaurants and breweries. My hope is to have the breweries pay for the lighthouses ongoing maintenance. We will already be using the desalination process in here to create water, but the device I am purchasing creates so much more water than we will need, and this seemed like a great use for it. We want to create a unique beer here, and it will be unique  the only one made from seawater.

As the desalination systems costs around $100,000 and renovating the lighthouse will be more than that, having a money generating operation isnt a bad idea. Though an official name hasnt been selected for the beer, Sea Ale and Lighthouse Brew have been considered.

For a larger map of Fourteen Foot Bank Lighthouse, click the lighthouse in the above map.

The Fresnel lens formerly used in the lighthouse can be seen in the Cannonball House Museum in Lewes. The museum, located at the intersection of Front and Bank Streets in Lewes, can be reached at (302) 645-7670.