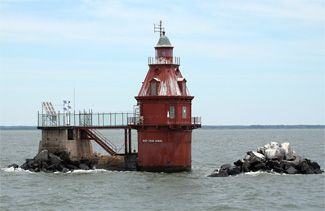 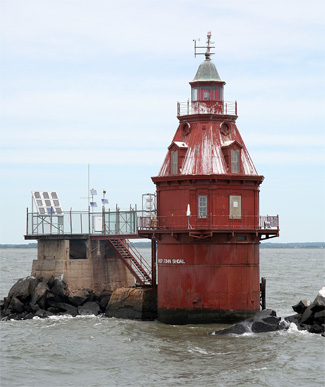 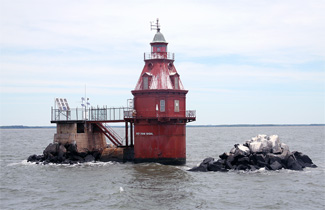 It was Christmas Eve 1797, and Captain Robert Folger was guiding the vessel John up Delaware Bay on the last leg of its transatlantic voyage from Hamburg, Germany to Philadelphia. Aboard were more than fifty German passengers in addition to the crew. Winter had already started to extend its icy fingers into the bay as evidenced by the patches of ice floating past the ship. Any thoughts of Christmas Day festivities were rudely interrupted when the John ran hard aground on an unnamed shoal near the entrance to Cohansey River. The passengers were off-loaded and transported up Cohansey River to Greenwich and other small settlements, where Christmas would have to be spent with strangers. Sensing the vessel was in danger, the Captain and crew, along with some helpful locals, returned to the John and commenced off-loading its cargo of linen, glass, rope, copper nails, gin, and German toys. The heavy ice on the bay soon sliced through the stranded vessels hull, sealing her doom. One survivor of the wreck can still be seen in Greenwich  the ships figurehead, which is located in Gibbon House Museum.

Subsequently, mariners usually mentioned the loss of the ship John when speaking of the shoal where she met her end, and in time the shoal finally received a name: Ship John Shoal.

Following the completion of a screwpile lighthouse on Brandywine Shoal in 1850, plans were made to place similar structures at two other sites in Delaware Bay: Cross Ledge and Ship John Shoal. The lighthouse at Cross Ledge was only partially complete in 1856, when the onset of winter interrupted the project. That winter was a harsh one, and the unfinished lighthouse was completely swept away by ice. The Lighthouse Board had second thoughts about deploying screwpile lighthouses in icy waters, and the plans for Ship John Shoal Lighthouse were scrapped.

With a new design for Ship John Shoal Lighthouse in hand, the Lighthouse Board petitioned Congress in 1872 for the necessary funding. The cost for the lighthouse was estimated at $125,000, several times the $31,805 that was thought sufficient for the screwpile lighthouse years earlier. Congress provided $50,000 in 1873 to start the project, and a survey of the shoal was conducted later that year. The required ironwork was completed in 1874, and starting in late August, ninety-seven wooden piles were driven into the shoal and then cut at a level of twenty-two feet below high tide to serve as a foundation.

The bottom portion of the caisson, which had a diameter of twenty-four feet and would support the lighthouse, was towed to the shoal and then sunk into place atop the piles on October 24, 1874. The Annual Report of the Lighthouse Board for 1875 recorded that the caisson was filled with concrete, and a temporary structure placed upon it, from which a light was exhibited for the first time on the evening of the 29th of November of that year [1874]. The report continued: The past winter was one of great severity, and the structure was probably subjected to as severe a test as it will ever be again.

The caisson survived the icy onslaught fine, but the same cannot be said for the keepers, as they became alarmed for their safety, and abandoned their posts on January 18, 1875, hailing the passing steam tug Charlie Lawrence. Due to the quantity of ice Delaware Bay, it was impossible to reach the caisson until March 13, when it was found unharmed, and the light was re-exhibited. The keepers reported that the caisson vibrated greatly when struck by ice, making them feel the structure was going to be dislodged. An additional 2,000 tons of riprap were placed around the caisson later that year to keep the ice away from the foundation.

The temporary lighthouse atop the caisson would have to serve for an extended period, as the superstructure originally intended for Ship John Shoal was sent to Connecticut to be used at Southwest Ledge Lighthouse. The two lighthouses were planned as twins, and when the foundation at Southwest Ledge was unexpectedly finished first, it received the first cast-iron tower. An identical superstructure was soon completed for Ship John Shoal, but the Lighthouse Service decided to use it as part of an impressive display for the International Centennial Exposition held in Philadelphias Fairmount Park to honor the countrys 100th birthday. A keeper actually lived in the lighthouse and tended a light during the exposition.

The iron towers, built by the firm of Ramsey and Carter, were eight-sided affairs with Second Empire styling. An elongated mansard roof covered the upper two stories, above which sat the octagonal lantern room. The interior of the structures was lined with wood.

Following the exposition, the iron tower was relocated from the park to Delaware Bay, where during the summer months of 1877 it was installed on the caisson. When the temporary lighthouse was removed from the caisson on May 15, 1877, lightship LV24 was anchored nearby until the new light could be displayed. A fourth-order Fresnel lens, manufactured by L. Sautter & Cie., was installed in the lantern room of the new Ship John Shoal Lighthouse and activated for the first time on August 10, 1877 with William Knowles as its first head keeper. Charles Sullivan and two assistants were in charge of the temporary light from 1874 to 1875, when William Knowles was appointed head keeper. To assist mariners in periods of limited visibility, the lighthouse was also equipped with a 1,200-pound fog bell that was struck a triple blow every forty-five seconds.

In 1884, the characteristic of the light was changed from fixed red to fixed white with a red sector covering an arc of 185°, and in 1892, the light was changed to an occulting light. Large stone blocks, weighing from two to six tons each, were placed in a pile about sixty feet from the foundation cylinder in 1894 to protect the lighthouse from damage caused by running ice. This photograph, taken in 1891, shows the lighthouse before the riprap was put in place.

A story is reportedly documented in government records of an incident at Ship John Shoal Lighthouse involving the head keeper, his wife, and the district inspector around 1903. At that time, it was against regulations to have female visitors at the station, but the head keeper occasionally had his wife come to the lighthouse. During one of the wifes clandestine visits, the lighthouse tender was spotted approaching the station with the inspectors flag flying. The keepers soon hatched a plan to blacken the face and arms of their female visitor and have her hide in the coal bin located in the basement.

The official account tells of the inspectors arrival at the lighthouse. There is no doubt that in all of this hurry to hide the wife of the keeper there might have been some noticeable nervousness amongst the keepers; so the commander carefully went over the station, checking everything very closely as he went looking into all the closets, cupboards and down the stairways, because he had no doubt seen, as he passed the living quarters, that the lady in her haste had left her knitting. He said to the keeper, Do you do knitting here? Fortunately, the keeper could knit. Oh yes, he said. I have to pass away the times in between working periods. Still the officer was not satisfied that there was not a woman at the station; so he queried, Do you ever have any woman on this station? Oh, no, sir; we never have any women on the station.

The inspector concluded his visit by taking a lantern down into the dark basement. He searched behind the storage bins, tanks, and lockers trying to confirm his suspicion that a woman was at the lighthouse, but found no one. The keepers ploy had worked, for the wife of the keeper had crawled back behind the top of the pile of coal and lain motionless on the black lumps. The inspector left without comment, but soon paid another surprise visit to the station and this time found the keepers wife. The head keeper was reprimanded, suspended for a short period, and counseled to follow all regulations in the future. Now, this official story may be a yarn, but lighthouse inspectors did indeed show up unannounced and conduct exhaustive inspections of the stations.

Around 1920, a concrete foundation, surmounted by a metal platform, was constructed atop one of the two piles of riprap that protected the station. A metal catwalk led from the lighthouse to the platform, which held several storage tanks that were too large to place in the small lighthouse. In 1931, the light was electrified through the installation of duplicate 800-watt lighting plants. A 32-volt, 250-watt bulb was placed inside the fourth-order Fresnel lens in lieu of incandescent oil vapor equipment previously used, and the lighthouse was wired for lights in the living quarters, fog-signal room, and storeroom. At the same time, a Tyfon air horn replaced the stations fog bell.

Keeper Wendell H. Wells gave an interview to We Women in 1941 during which he provided the following details on life at the station:  [We are responsible for] keeping all equipment in good condition, and making a record of weather at intervals of four hours. There are three men here, and one is mostly on shore leave, as we have 22 days at the Light and eight days each ashore. When on duty we stand 12-hour watch in which one is from midnight to noon and the other from noon to midnight. Wells also noted that they had between 200 and 300 visitors to the station each year, which helped to break the monotony of life at the lonely outpost.

The twelve-hour watches came to an end in 1973, when the station was automated, and the only visitors allowed at the lighthouse after that were members of the Aids to Navigation team from Cape May, who routinely visit the station to service the light. A bank of solar panels was placed on the storage platform in 1977 to supply power to the unattended light.

In June 2011, Ship John Shoal Lighthouse was declared excess to the needs of the United States Coast Guard and offered to eligible organizations under the provisions of the National Historic Lighthouse Preservation Act of 2000. Qualified entities were given sixty days to submit a letter of interest and were required to obtain a Tidelands Lease from the State of New Jersey to occupy the submerged lands. After no suitable organization was found, the General Services Administration initiated an auction for the lighthouse on June 11, 2012. The auction closed on September 26, 2012 with just one bid of $30,000 having been submitted. The government reserves the right to reject a bid if it is deemed too low, and it seems that was the case as a new auction for the lighthouse opened on October 10, 2012. This second auction, which attracted three bidders, closed on November 16 with a winning bid of $60,200.

For a larger map of Ship John Shoal Lighthouse, click the lighthouse in the above map.

The lighthouse is best seen from the water. Cape May Whale Watcher and Delaware Bay Lighthouse Keepers & Friends both offer cruises during the summer that pass by Ship John Shoal Lighthouse.

The fog bell used at Ship John Shoal Lighthouse can be seen at John DuBois Maritime Museum in Greenwich, while the station's fourth-order Fresnel lens is at the U.S. Coast Guard Air Station in Atlantic City.