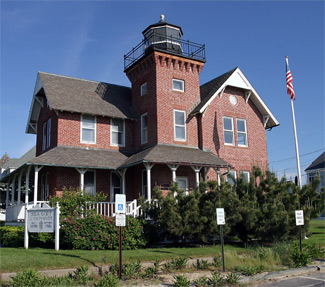 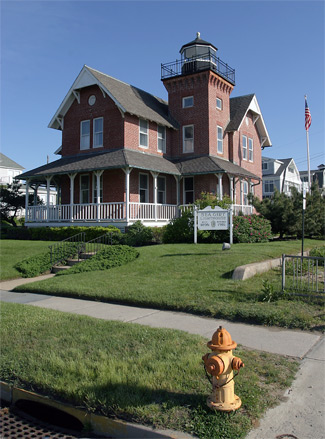 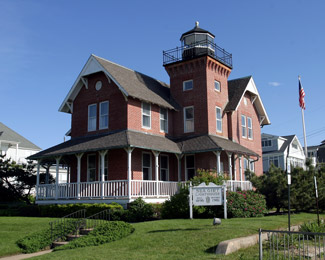 The section of the New Jersey coast now known as Sea Girt was formerly called Wreck Pond, for the small body of water just 2½ miles north of where Manasquan River empties into the Atlantic. Local Native American tribes, including the Algonquin, Lenni Lenape, Navesinks, and Minnesink, would congregate each August near Wreck Pond to bathe and feast on clams. The white man adopted this tradition called Big Sea Day, and farmers from as far away as twenty miles would camp near the pond for a weekend of unconventional festivities. The gatherings fell out of favor when local hotels attracted sophisticated clientele that frowned on the events. This stretch of coast was eyed by the Lighthouse Board in the late 1880s as a site for a new lighthouse. In its annual report of 1887, the board explained the need for such a light.

The distance between Barnegat and Navesink lights is 38 ¼ miles. In good weather, at the extreme limit of visibility of the lights, both can be in sight only when close in to the beach. In hazy weather there will practically be a dark space between them. In view of the immense quantity of commerce passing both ways in this vicinity, this dark space should be lighted and vessels off-shore should be enabled, when nearing the port of New York, to fix their positions by cross-bearings. These conditions can be had by establishing the proposed light. It is therefore recommended that a light be established at or near a point about midway between Barnegat and Navesink light-stations, and it is estimated that this can be done for $20,000 which amount it is recommended be appropriated for that purpose.

Situated nineteen miles south of Navesink and twenty-six miles north of Barnegat, Sea Girt was an ideal candidate. In addition, Manasquan (Squan) Inlet was considered the best harbor of refuge in the area, which further bolstered the need for a light. Congress agreed with the boards request and appropriated the necessary funds in 1889.

A site close to Manasquan Inlet was selected for the lighthouse, but before the transaction was closed the location was deemed unfit for the purpose. Acreage just south of Wreck Pond was examined next, and a deed for the property was signed on July 29, 1895. Work on Sea Girt Lighthouse, known as Squan Inlet Lighthouse until April 1897, was carried out over the next year. The dwelling was an L-shaped, redbrick Victorian structure with an attached tower that rose just above the roofline. A fourth-order Fresnel lens, crafted in France, was placed in the lantern room, and the light was activated on December 10, 1896. The revolving lens produced a flashing red light that filled the dark void between the lights of Navesink and Barnegat. Sea Girt Lighthouse would be the last lighthouse built on the Atlantic Coast to feature a tower and dwelling integrated into one structure. Besides a residence, the keeper was provided a well, a windmill, and an oil house.

The first keeper assigned to Sea Girt was Abraham Wolf, described by a later keeper as a convivial soul. This attribute served him well during the Civil War, when, as a Union officer, he would don a grey uniform, and with his best imitation of a southern drawl would go undercover amongst captured Confederate soldiers to learn of the enemys positions and battle plans. Keeper Wolf had previously been in charge of Absecon Lighthouse for twenty-three years and retired at Sea Girt in 1902.

The grounds of the station were covered with soil and seeded with grass in 1899, and that same year, a flagstaff was erected, a telephone installed, and a set of signal-code flags was given to the keeper. The following year, a 240-foot-long sand fence was placed seaward of the lighthouse during the winter to reduce the amount of sand that drifted on the stations lawn.

By 1906, Sea Girt Inlet, the point at which Wreck Pond met the Atlantic, had migrated south and threatened the northeast corner of the lighthouse reservation. Sand bags were stored at the lighthouse in case temporary revetments had to be made, and in 1907, a short pile jetty was built to protect the station. Matters became more dire in 1915, and additional protection work was built at a cost of $4,771.

In May 1921, Sea Girt Lighthouse became the first shore-based station to be outfitted with towers for transmitting a radio signal. The beacon at Sea Girt functioned as part of a network that included the Fire Island and Ambrose Lightships. Francis Collins described this navigational radio system, a precursor of Loran and GPS, in his book Sentinels Along Our Coast:

The system of radio signals is surprisingly simple. They are flashed far out to sea from three stations in the vicinity of the entrance to New York Harbor, each being distinctive so that it can be instantly identified. One of the sending stations is aboard the Ambrose Light-ship directly before the entrance of the harbor. A second station is located at Sea Girt on the New Jersey coast, about thirty miles to the south. The third station is aboard the Fire Island Light-ship, about thirty miles east of the Ambrose Light-ship, off the south shore of Long Island. The signals thrown out from Sea Girt have a range of two hundred miles, while the other two stations can be clearly heard forty miles away. Even the speediest liners therefore can pick up the radio signals several hours sail from the harbor entrance. The radio compass signals are distinctive, so that they cannot by any chance be confused with the sending of other shore or ship stations. The Ambrose Channel Light-ship sends out a series of signal dashes continuously for twenty seconds, and then remains silent for twenty seconds. The signal of the Fire Island Light-ship station is a series of double dashes continued for twenty-five seconds, followed by a silence of the same duration. The Sea Girt station throws out a series of triple dashes, for sixty seconds, and then remains silent for six minutes. By listening in on these three signals it is possible to lay the ships course with amazing accuracy. The new system has the great advantage of being both simple and inexpensive.

The Lighthouse Service clearly stated the advantages of the radio signals: This system should give to the navigator for the first time a means of taking in a fog, or time of low visibility, accurate bearings of invisible lighthouses and light vessels, which he may use in locating or steering his vessels, and he should be able to do this independently as he uses his magnetic compass for bearings on visible objects. When developed and its use extended, radio fog signals and the radio compass will probably be the greatest advance made in a long period in affording protection to vessels in fog and should be the means of avoiding some of the serious marine disasters now due to inability to hear or locate a fog signal under unfavorable conditions.

George Thomas started his service as the last keeper at Sea Girt in 1931, having served previously at Fire Island and Shinnecock lighthouses in New York, and retired from the station on March 31, 1914. When the U.S. entered World War II, the light in the tower at Sea Girt was extinguished, and the lens removed. The Coast Guard remodeled the lighthouse to provide quarters for up to twenty of its men to secure the surrounding shoreline. One man with binoculars was always stationed in the tower to watch for U-boat activities, while others took shifts patrolling the beach.

A modern beacon was placed atop the lantern room following the war and served as the light until it was replaced by a light shown from a metal tower erected on the stations lawn in 1955. Not wanting to pay for maintenance of the structure, the Coast Guard offered the lighthouse to the State of New Jersey. When the state declined, the Borough Council of Sea Girt informed the General Services Administration of their interest in the property, and Sea Girt Lighthouse was sold to the borough on August 10, 1956 for $11,000. Over the next two decades, the lighthouse served as the Sea Girt Library and a meeting place for various clubs and organizations.

After years of heavy use, the lighthouse was in need of costly repairs. The borough council considered selling the property rather than fund the necessary work, but concerned citizens convinced the council to retain the historic lighthouse. In 1981, Sea Girt Lighthouse Citizens Committee Inc. was formed and granted a twenty-five year lease for the cost of $1 per year.

The committee succeeded in raising funds to restore the attractive lighthouse, and it continues to serve not just as an historic attraction, but as a multi-purpose center for the community. Tours are offered to the public on Sundays. School children take educational field trips to the lighthouse, and during an average month, over twenty different events are held at the lighthouse. In 2002, a fourth-order Fresnel lens formerly used in Crowdy Head Lighthouse in Australia was purchased on eBay for $20,000 and is now on display at Sea Girt Lighthouse. The committees untiring efforts have been rewarded with an extension of their lease through 2056.

For a larger map of Sea Girt Lighthouse, click the lighthouse in the above map.

From Highway 71 in Sea Girt, take Beacon Boulevard east to Ocean Avenue, where you will see the lighthouse.

Sea Girt Lighthouse is open April through November on Sundays between 2 and 4 p.m. Call (732) 974-0514 for additional information.

The lighthouse is owned by the Bureau of Sea Girt and operated by Sea Girt Lighthouse Citizens Committee Inc. Grounds open, dwelling/tower open in season.