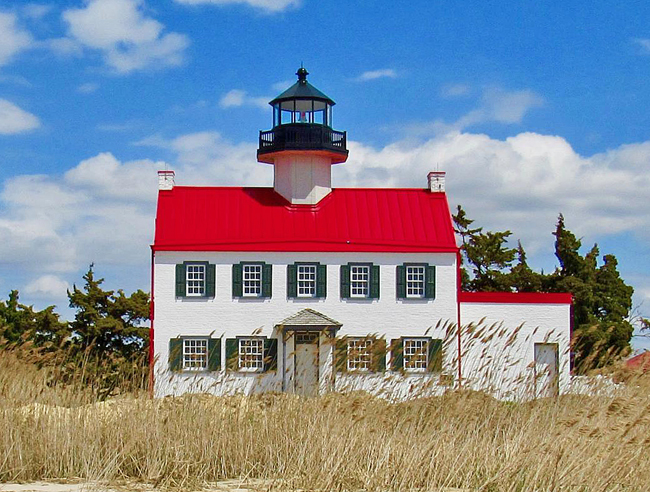 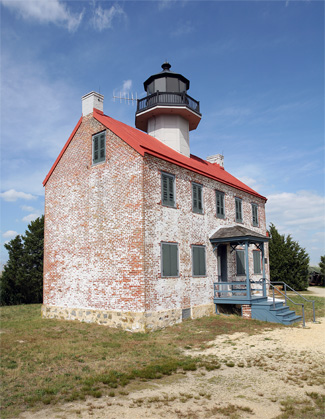 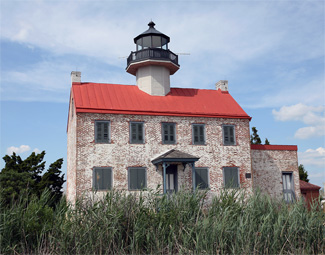 On the northern side of Delaware Bay, not too far from the Atlantic Ocean, is found the mouth of the circuitous Maurice River. In 1894, the Lighthouse Board used the following justification for a set of range lights at the entrance to the river:

It is claimed that some 500 sailing vessels are engaged in the oyster trade on the Maurice River during the season, and that they give employment on average to 1,500 men; in addition, a number of coasting vessels visit this river, and the establishment of manufacturers at Millville, N.J. is increasing the marine traffic.

The resulting range lights were placed in operation in October 1898. Half a century before, Maurice River Lighthouse had been built near the rivers mouth, but the reason for the erection of the earlier lighthouse was seemingly due more to the persistence of an individual than the need of trade or a community. Maurice River Lighthouse had its name officially changed to East Point Lighthouse in 1912. Mariners had for some time been using the name East Point before the change, likely to avoid confusion with the recently constructed Maurice River Range Lights.

Around the start of the year 1849, Joshua Brick wrote to his congressman, Representative Charles Brown, requesting the establishment of a lighthouse at Maurice River, and Brown forwarded the petition to Stephen Pleasonton, Fifth Auditor of the U.S. Treasury, who was responsible for the countrys lighthouses. In his response to Brown, dated January 22, 1849, Pleasonton wrote: I do not recollect ever to have heard it suggested before that a Light House was necessary at this place, and therefore cannot form an opinion as to the propriety of recommending an appropriation for the erection of it. Pleasonton went on to explain the typical procedure for soliciting the construction of a lighthouse. It is usual for the parties interested to unite in a petition to Congress, in which they will state their reasons, and this being referred to the Committee of Commerce of the proper House of Congress, is by them acted on. I would advise Mr. Brick to take this course in the present instance, more particularly as it is not probable that Congress will, at this short session, pass any bill for the erection of new Light Houses.

Congressman Brown or Mr. Brick must have had some powerful connections for Pleasonton sent a letter to Henry Hicks, Superintendent of Lights at Wilmington, Delaware on March 10, 1849 in which he communicated that $5,000 had been allocated by Congress for a lighthouse on the East Point of Maurice River. Hicks was asked to cause the best site to be selected and purchase a few acres of land, if it can be had at a reasonable rate. An elevated, half-acre knoll was selected on marshy East Point and purchased for $250 from its owner, who just happened to be Joshua Brick.

Joshua Brick still wasnt done with the lighthouse matter, for he sent Pleasonton a letter suggesting that he himself be awarded the contract to build the lighthouse. Pleasonton responded on April 10 saying, It is my practice to advertise for proposals to build all Light Houses by contract, (unless it be very difficult work requiring an Engineer) and to give the contract to the lowest bidder. Brick was then invited to submit a proposal when the project was advertised.

The outcome of the bidding was known by June 22, and a Samuel Ellis, with a bid of $1,975, was the lowest bidder. Pleasonton didnt feel Ellis could accomplish the task for that sum, but was constrained to accept the bid if Ellis was able to post a sufficiently high bond to ensure completion of the lighthouse if he should fail to do so himself. Pleasonton was likely relieved that Ellis was unable to post bond, and the contract was given instead to Nathan and Samuel Middleton, who had recently completed the second Cape May Lighthouse.

Joshua Brick stepped in one more time and wrote to the Treasury Department asking that an additional story be added to the proposed lighthouse so that its light could be visible above low-lying fog. The patient Pleasonton replied that eight more feet could be added to the lighthouse if the Middletons could accomplish the additional work for a reasonable sum. Brick even offered to contribute the $250 he was paid for his land towards the extra story. The detailed exchange between Pleasonton and Brick is quite unique, and makes one wonder if Brick was trying to serve his own interests or was simply working for the good of the local community.

William W. Yarrington was appointed first keeper of Maurice River Lighthouse on September 10, 1849, but just two weeks and a day later, he was replaced by Francis Elberson, who would hold the position until 1853. The following detailed description of the lighthouse at which they served was given in 1878:

The light is exhibited from [the] lantern on top of keepers dwelling, and is 48 feet above ordinary sea level; it is of the 6th order, fixed white, and is supplied with Franklin lamps. The dwelling is of brick, two stories high, and one-story kitchen adjoining east end, which is also used as oil-room. The first story is divided into two rooms and a hall, with stairway to second story, which is divided in the same way. There is a cellar under whole house, which is wet in very high tides; it contains a cedar water-tank of a capacity of 700 gallons.

Nine lamps and a like number of reflectors were initially used in the lantern room to produce a fixed white light until a sixth-order Fresnel lens was installed in 1856. A new fourth-order lantern was placed atop the lighthouse in 1870, and the brick oil house located at the station was added in 1900-1901.

Ten keepers lived at East Point Lighthouse over the years, with Linwood Spicer, who served from 1905 to 1911, being the last. As was common when lighthouses along the shores of Delaware Bay were automated, East Point Lighthouse was fitted in 1911 with an acetylene light that could operate night and day for a couple of weeks on fuel supplied by tanks installed in the lighthouse. Full-time keepers, who had an annual salary of around $500, were no longer needed, and in their stead custodians were allowed to live at the lighthouse. The custodians were required to maintain the grounds and notify the Lighthouse Service if there were any problems with the light. In exchange, they were provided the token salary of $1 each year. Samuel Flick was hired as the lights first custodian in 1911.

The local inspector knew it would be hard to attract an intelligent capable custodian for remote East Point Lighthouse, so he suggested the salary be raised to $120. His request was denied, but capable custodians were still found. One inventive caretaker operated a boat rental business at the lighthouse to supplement his $1 salary. This business was sold to subsequent custodians, until the last custodian vacated the lighthouse in 1945. At that time the business known as East Point Boat Rentals, Inc. was sold to a group of three men for $1,500.

At the outset of World War II, East Point Light was darkened, and then later discontinued altogether. The federal government placed the lighthouse on the auction block in 1955, and after bids had been received, the New Jersey Division of Fish, Game, and Wildlife complained that they had not been offered the lighthouse first. The government was forced to rescind the sale to the highest bidder and transfer the station to the State of New Jersey.

The property was desired by the state not for the lighthouse but for the access to the water at the site. The lighthouse was boarded up to deter vandals, but no maintenance was performed on the structure. A group of concerned citizens formed the Maurice River Historical Society in February 1971 to save the lighthouse, however, while the group was in negotiations with the state, trespassers started a fire at the lighthouse on July 15, 1971, which destroyed the lantern room, roof, and damaged much of the interior. Undeterred by the now much more difficult task, the society raised funds to rebuild the lantern room and roof and even convinced the Coast Guard to reactivate the lighthouse  an event that occurred on July 2, 1980.

In the 1990s, the historical society received two grants of $184,000, one a Federal ISTEA grant and the second a matching N.J. Historic Trust grant, and over $400,000 of restoration work was performed on the exterior of the lighthouse. Phase two of the project, which focused on restoring the interior, started after sufficient funds were obtained and allowed the lighthouse to be opened to the public on a regular basis.

On a clear day at East Point, Miah Maull Shoal Lighthouse can be see offshore near the middle of Delaware Bay. The Coast Guard removed the fourth-order lens from Miah Maull in the 1990s and has promised it to the Maurice River Historical Society once restoration of the interior of East Point Lighthouse is complete. Being custodian of East Point Lighthouse when the pay is so little has always been a thankless undertaking, but the Maurice River Historical Society is doing a commendable job of watching over the lighthouse.

In 2016, a $852,000 restoration and construction project was carried out at East Point Lighthouse that included replacing the roof, renovating the interior, and repointing exterior bricks. The work was a joint project between the Cumberland County Improvement Authority and the Maurice River Historical Society. Funding was provided by the Federal Highway Administration and the New Jersey Historic Trust. On September 10, 2017, exactly 168 years since the lighthouse was placed in service, a rededication celebration was held to reopen the lighthouse to the public. Five interior rooms are now furnished with period antiques to transport visitors back in time to when a keeper still lived in the lighthouse, and modern-day amenities, like heating and air-conditioning, were added.

Its a beautiful thing to watch the figurative tides turn on this lighthouse, said Nancy Patterson, president of the Maurice River Historical Society, who helped lead the restoration effort along with the Cumberland County Improvement Authority and the New Jersey Historic Trust. But like the tides that come in and go back out slowly, things like this take time. But I think weve turned the corner on this place again creating a sense of pride for this community.

In an attempt to combat erosion and flooding, the state spent $460,000 in November 2019 to place sand-filled "geotubes" around the point as temporary protection. This measure has helped prevent some flooding, but more protection is needed. East Point Lighthouse closed in March 2021 after the preservation group's lease with the N.J. Department of Environmental Protection expired. The lighthouse reopened in August 2021 under a temporary license that is good for two years.

For a larger map of East Point Lighthouse, click the lighthouse in the above map.

The lighthouse is owned by the New Jersey Department of Environmental Protection Division of Parks and Forestry and is managed by the Maurice River Historical Society. Grounds open, dwelling/tower during tours.