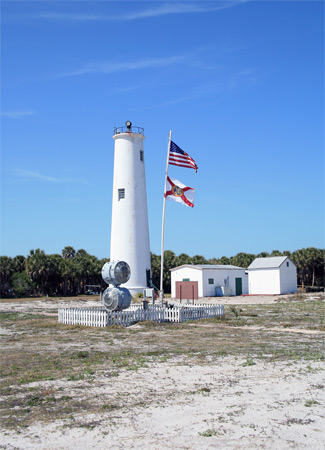 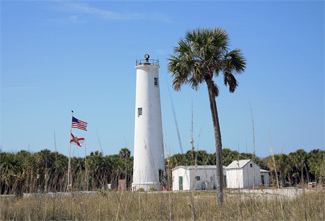 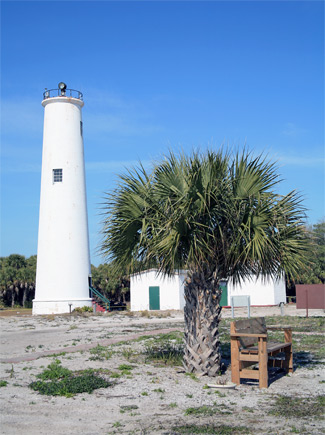 In 1765, two years after Florida passed from Spanish to British control, surveyor George Gauld named the small island found at the entrance to Tampa Bay Egmont Key, after John Perceval, second Earl of Egmont and First Lord of the Admiralty. Gauld recorded the following description of the island in his journal:

Egmont Island lies North and South, is about 2 miles long, and better than ¼ of a mile broad. The North end is highest, being about 6 or 7 feet above high water mark: a bank much of the same height, and about 40 feet broad, runs on the west side next to the sea, almost the length of the whole island, within which there is a valley covered with bushes of different sorts, and various plants that afford an agreeable verdure, though the soil is hardly any thing but sand and shells. There are a few fresh water swamps, but the water is not good.

Through the years, Egmont Key has been home to two lighthouses, a fort, a movie theater, a cemetery, boat pilots, and a radiobeacon. Today, all that remains on the island is a truncated lighthouse, crumbling remains of the fort, a small colony of gopher tortoises, and a park ranger to interpret the islands history. In March 1837, Levi Woodbury, Secretary of the Treasury, requested that Napoleon L. Coste, commander of the revenue cutter Campbell, stop at all ports of entry between New Orleans and Washington, D.C. and report upon the need for additional aids to navigation. Lieutenant Coste filed his findings on July 5, 1837:

I have the honor to report, that the first place which presents itself to me of importance for the erection of a light-house, is at the mouth of Tampa bay, on the north point of Eggmont [sic] key. The western coast of Florida is very low, and similar in appearance, making it necessary for the mariner to have some mark by which he could take his departure; and as Eggmont is the point which all vessels endeavor to make when bound to St. Marks, Apalachicola, or St. Josephs, it is my opinion, that by the erection of a light-house on the point above mentioned, the navigation of the coast would be facilitated, and much property saved which is now annually lost by shipwreck. It is also important that I should inform you that a light-house would be a leading mark over the bar into Tampa bay, a bar capable of admitting small class frigates, and navigable to within ten miles of its head for sloops-of-war at all times.

Even with this recommendation, it wasnt until after Florida achieved statehood in 1845 and its legislature petitioned Congress in December of 1846, that Congress granted $10,000 in 1847 for a lighthouse on Egmont Key. Francis A. Gibbons of Baltimore signed a contract with the government to provide a lighthouse and dwelling at a cost of $6,250.

The contract called for a forty-foot, brick tower, topped with an octagonal lantern that would shelter thirteen lamps backed by twenty-one-inch reflectors. Winslow Lewis supplied the lighting apparatus at a cost of $1,330. The St. Marks customs collector, a Mr. Walker, oversaw the construction and recommended that in consequence of the heavy gales of wind in this country, the one-story, brick dwelling should be placed at least 100 feet from the tower, so in case of its prostration, the house and lives would not be endangered. Walker also insisted that the tower be built on a foundation of driven pilings rather than on a foundation of dry shells and sand as promoted by the frugal Stephen Pleasonton, Fifth Auditor of the Treasury.

Work began on the lighthouse during the summer of 1847, and the lamps were to be lit by January 1, 1848 according to the contract. However, the supply ship Abbe Baker, which was transporting bricks from New York for the lighthouse, ran aground on Orange Key, and roughly half of the bricks had to be tossed overboard to refloat the ship. By February 1848, the tower stood at a height of twenty feet, but work had to be halted until a new shipment of bricks arrived. The tower was officially certified on April 19, 1848, and shortly thereafter Sherrod Edwards, the first keeper of Egmont Key Lighthouse, activated the light. At that time, the lighthouse was the only one between Key West and St. Marks.

On September 23, 1848 a powerful hurricane covered Egmont Key with several feet of water. According to local legend, Keeper Edwards and his family survived the storm that washed over the island by seeking refuge in a small boat tethered to a Palmetto tree near the middle of the island. Not too long thereafter, Keeper Edwards rowed his family ashore and resigned. It was likely due to Walkers pile foundation that the tower survived the storm. The lighthouse was subsequently struck by lightning, which opened cracks in the tower.

In February 1852, Keeper John F. Hagan reported a rare occurrence at the lighthouse. We have had ice here three-eighths of an inch thick, and the fish have been so chilled as to be unable to navigate. Numbers of them have been washed up on the beach  among which I saw several small shovel-nosed sharks. Our potatoes, watermelons, peppers, and most other vegetables are all killed. Amazing weather for this latitude.

In 1854, a concrete pad was poured around the base of the tower to prevent it from being undermined, but by 1856, it was apparent that a replacement lighthouse was necessary. Following a $16,000 appropriation made by Congress on August 18, 1856, a new tower, twice as tall as the original, was completed in 1857 roughly ninety feet inland from the previous tower. Starting in 1858, the lighthouse exhibited a fixed-light produced by a third-order Fresnel lens at a focal plane of eighty-six feet.

In 1861, keeper George V. Rickard found himself caught in a struggle for control of the lighthouse. The collector in Key West was loyal to the Union, while the collector at St. Marks sided with the Confederates. Rickard feigned allegiance to Union blockaders near the island, until their absence allowed him to flee the island. After crating up the Fresnel lens, Rickard absconded to Tampa with the lens and as many supplies as he could transport.

The lighthouse soon fell under Union control and was reactivated using a makeshift light. After the war, a fourth-order lens was activated atop the tower on June 2, 1866, and on December 30, 1893, a fixed red sector was placed in the light. The red glass reduced the distance at which the light could be seen from seaward, so in 1896 a stronger third-order lens with two red sectors was installed in the lantern room.

In 1872, a buoy depot and coal shed were built near Egmont Key Lighthouse to store buoys and fuel needed by the buoy tenders. During the late 1800s and early 1900s, most of the buoys on Floridas west coast were managed by the depot on Egmont Key.

Using an appropriation of $3,500, a new dwelling was built for the assistant keeper in 1899. This residence was a two-story frame structure, with a parlor, dining room, kitchen, bedrooms, and storeroom on the ground floor and two bedrooms on the second floor. Galvanized iron gutters collected the rainwater that fell on the dwellings slate roof and conducted it to cistern that was linked to the kitchen by an iron pipe. At the same time, the upper and lower galleries on the head keepers dwelling were rebuilt, and brick walkways were laid between the residence and the tower and from the residence to the wharf.

In 1898, during the Spanish-American War, Fort Dade was constructed on the island as part of a comprehensive coastal defense system. Named for the army commander, who along with his detachment was killed by Seminole Indians in 1835, the fort, along with Fort DeSoto on Mullet Island to the northeast, stood watch over the entrance to Tampa Bay. The fort was staffed during World War I as well, and by the time it was deactivated in 1923, a movie theater, bowling alley, tennis courts, and miles of brick roads had been constructed on the island.

A 1907 Light List noted that a Conch shell would be sounded at Egmont Key in answer to signals from passing vessels. This unique fog signal was replaced on February 18, 1916 by a bell struck by machinery. In 1915, an acetylene light was established atop a reinforced concrete pile structure to form, with Egmont Key Lighthouse, a set of range lights. A radio beacon was added to the station in 1930.

In 1944, the upper portion of the lighthouse was removed along with the Fresnel lens, and a double-headed DCB-36 Rotating Beacon was placed on top of the capped tower. The remaining keepers dwelling was demolished in 1954 and replaced by a one-story barracks. In 1974, Egmont Key became a National Wildlife Refuge, managed by the U.S. Fish and Wildlife Service. The island was also added to the National Register of Historic Places in 1978, due to the lighthouse and remains of Fort Dade. When automated in 1989, after a DCB-24 Rotating Beacon was installed, Egmont Key Lighthouse was the last remaining staffed lighthouse in Florida and one of only seven in the United States. Today, the Florida Park Service and U.S. Fish and Wildlife Service work together to manage the island.

In November 2008, a celebration was held on the island to commemorate the 150th birthday of Egmont Key Lighthouse. In preparation for the event, the lighthouse received a new coat of paint thanks to the Tampa Bay Rough Riders and volunteers from the Coast Guard. A new plaque was unveiled at the base of the lighthouse during the festivities, and birthday cake was served to over 200 people. For the past several years, Christmas lights have been placed on the tower by volunteers from the Egmont Key Alliance to bring a little holiday cheer to the island.

In 2013, the lens pedestal from Egmont Key Lighthouse was shipped to Tallahassee to be restored by the Florida State Conservation Laboratory. Volunteers working at the lighthouse hope this is just one small step towards restoring the lighthouse to its pre-1944 appearance.

Located on Egmont Key, which guards the entrance to Tampa Bay about six miles west of the Sunshine Bridge.
Latitude: 27.60082, Longitude: -82.76067

For a larger map of Egmont Key Lighthouse, click the lighthouse in the above map.

A distant view of the lighthouse can be had from the fishing pier in Fort De Soto Park, but a trip to the island is required for a good view. Ferry service to the island is provided by Hubbard's Marina from Fort DeSoto County Park.

The lighthouse is owned by the Coast Guard and managed by Egmont Key State Park. Grounds open, tower closed.


We visited Egmont Key aboard a boat out of St. Petersburg. It was a blustery day, and as we were docking at the island, the waves sent the boat crashing into the pilings. I can still hear the sound of crushing fiberglass. After rambling around the island and exploring the remains of Fort Dade, we went for a snorkeling adventure around ruins of the fort submerged in the waters off the southeastern side of the island. The visibility was very poor, and all that we could see were our hands held out in front of our heads to prevent us from running into anything unexpectedly.


We had a great time taking pictures of the light, walking on the white sand beaches finding great sea shells -- beautiful, whole sand dollars, a nice picnic lunch watching the small waves crash on shore and a glimpse of a couple of turtles trying to stay out of the hot sun. This is a great place to spend a few hours forgetting about life! What job? :-)