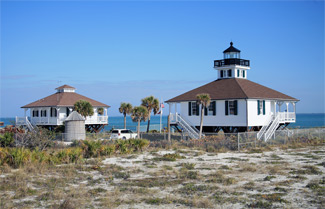 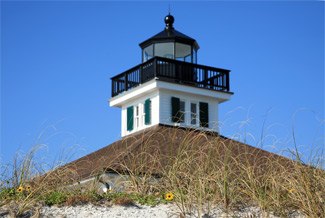 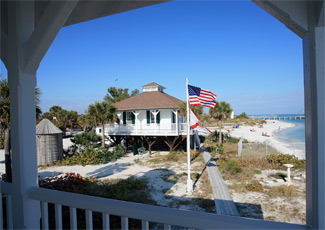 Perched atop iron pilings at the extreme southern end of Gasparilla Island is found the beautifully restored Port Boca Grande Lighthouse and its look-alike companion, which served as the assistant keepers dwelling. These two pieces of history were almost lost, as by 1970 the sea had whittled hundreds of feet off the southern end of the island and was lapping at the lighthouses foundation. Fortunately, pressure from local concerns prompted the government to take measures that proved successful in regaining much of the eroded island and in saving the lighthouse so it could be enjoyed by future generations. In the early 1880s, phosphate was discovered several miles up the Peace River, which empties into Charlotte Harbor before flowing west through the Boca Grande Channel to the Gulf of Mexico. Initially, the phosphate was shipped down the Peace River on barges to Port Boca Grande on Gasparilla Island, where it was loaded into ocean-going vessels. In 1888, Congress responded to the growth of the port by appropriating $35,000 for the construction of a lighthouse at the southern tip of Gasparilla Island to mark Boca Grande, the large mouth between Gasparilla and Lacosta Islands.

Built in 1890, the lighthouse consists of a one-story dwelling, supported by pilings, with a square tower protruding through the center of its hipped roof. Atop the tower is mounted an octagonal lantern room that originally protected a rare third-and-a-half-order Fresnel lens, which produced a white light interrupted every twenty seconds by a red flash at a focal plane of forty-four feet. The dwelling was painted white, its shutters green, and the lantern room black. Roughly seventy feet away, a nearly identical dwelling, minus the tower, was built for the assistant keeper, and wooden storage tanks were provided to hold a supply of water for the keepers. Keeper Francis McNulty activated the lighthouse on December 31, 1890, just in time to welcome the new year.

Four foundation piles were driven into the seabed about 735 feet southwest of the lighthouse to support a square, pyramidal structure, surmounted by a black lantern that, with the lighthouse, formed a pair of range lights to guide mariners into Charlotte Harbor. An eighteen-foot boat was given to Keeper McNulty so he could tend the front range light. In 1892, the front range light was washed out by the shifting of the channel leading to it being re-erected on land, 175 feet from the high-water mark and 475 feet from the lighthouse. An oil house was added to the station in 1895, and in 1898 a eighty-foot-long wharf with a T-head was extended into the waters near the station.

As the phosphate trade continued to grow, a railroad line was extended to Port Boca Grande, just north of the lighthouse, for transporting the phosphate from the mines to the port in a more economical manner. The rail line opened in 1907, and for the next several decades the phosphate flowed to the island where it was transferred from the trains directly to large freighters. In 1969, Port Boca Grande was Floridas fourth busiest port, and Florida provided well over half of the nations supply of phosphate, which was used primarily in fertilizer.

Elsie Williams, granddaughter of William Lester, who served as head keeper from 1894 to 1923, recalls stories of famous people visiting the island. In those days, millionaires like John Rockefeller and John Jacob Astor would bring their big yachts down for tarpon season and dock at grandfathers dock. Grandfather would invite them into the lighthouse and entertain them.

In 1914, Keeper Lester, by far the stations longest-serving keeper, was commended along with his assistant James T. Williams for assisting the occupants of two motorboats that were blown onto the beach near the lighthouse. The four men from the motorboats were furnished food and shelter until their boats were refloated.

Charles Fine began serving as an assistant keeper at the lighthouse in 1922, when he was just nineteen years old. In 1931, he informed relatives that he planned to get married and had obtained leave to visit them in Key West with his bride on May 1, but for some unknown reason he shot himself through the heart with a shotgun at the lighthouse on April 28. The wife of Keeper Charles Williams heard the gunshot, rushed to the scene, and discovered the body. Fine had suspended the shotgun from the ceiling of a room in his dwelling using an electric light cord, and then he held the muzzle with one hand and used his other hand to push the trigger with a stick. The lighthouse tender Ivy transported Fines body to Key West, where his father, Robert J. Fine, a retired lighthouse keeper, was living.

Boca Grande Lighthouse is known as a haunted lighthouse, but it isnt the ghost of Keeper Fine that roams the grounds. Rather, strange occurrences at the lighthouse are attributed to a keepers daughter who died at the lighthouse and to Josefa, a Spanish princess decapitated by Jose Gaspar, a pirate after whom Gasparilla Island is reportedly named.

The lighthouse was home to several keepers and their families until it was automated in 1956. Just two years later, visitors could arrive on Gasparilla Island by car instead of train, as a new bridge connected the island to the mainland. In 1966, the lighthouse was abandoned by the Coast Guard, and a modern light atop a fifty-eight-foot-tall steel skeleton tower was established nearby. By 1970, erosion on Gasparilla Island was threatening the old lighthouse along with other structures. The lighthouses foundation was undermined, imparting a dangerous lean to the structure, and its stairs had rotted away. In response, the Boca Grande Conservation Council was formed to lead the battle against erosion. The government finally acted in 1971, and a 265-foot granite jetty was built near the lighthouse to protect the sandy island. Florida Power and Light, which had storage facilities at Port Boca Grande, then pumped 100,000 cubic yards of fill into the area, much of it around the lighthouse itself.

In 1972, the lighthouse and the surrounding thirteen acres were transferred from the federal government to Lee County, for the establishment of a park on the property. The Gasparilla Island Conservation and Improvement Association, (GICIA), the islands property owners association, was successful in placing the lighthouse on the National Register of Historic Places in 1980, and then raised sufficient funds to have the lighthouse fully restored in 1985-86. The restoration efforts culminated in 1986 when a 377-mm drum lens was installed in the lantern room, and the lighthouse was re-commissioned as an active aid to navigation on November 21.

The lighthouse, dwelling, and surrounding acreage were transferred to the State of Florida in 1988 and became Gasparilla Island State Park. The following year, a small group of local citizens formed the Barrier Island Parks Society (BIPS), and one of their first objectives was to establish a museum in Port Boca Grande Lighthouse. A decade later, the $165,000 project was complete, and the museum, run by BIPS for the Florida Park Service, opened its doors. The museum tells the story of the area starting with the Native Americans, and also covers the Spanish influence, the local fishing industry, Port Boca Grande, and, of course, the history of the lighthouse.

Port Boca Grande diminished in significance after 1979, when the railroad line was abandoned and the phosphate industry moved north to Tampa. Florida Power and Light (FPL) started using the port as an oil storage facility in 1958. Oil from the Gulf of Mexico would be off-loaded at the port, stored in four large tanks, and then barged down the Intracoastal Waterway to the FPL power plant in Fort Myers. In 2002, the power plant was converted to natural gas, and the oil barges ceased calling at Port Boca Grande. Today, traffic near Port Boca Grande Lighthouse, the oldest building on Gasparilla Island, consists primarily of fishermen, pleasure boaters, and park visitors coming to learn of the islands storied past.

For a larger map of Port Boca Grande (Gasparilla Island) Lighthouse, click the lighthouse in the above map.

The lighthouse is owned by the State of Florida and managed by the Barrier Islands Park Society. Grounds open, lighthouse open during museum hours.


During my first trip to the island, I noticed what I thought was a colorful iguana near Port Boca Grande Lighthouse. Years later, I found out that in the 1980s a grandfather had given two small iguanas to his grandson, and when that family later left the island, the iguanas were turned loose in a park. Now decades later, the two original iguanas have become thousands. For tourists, the spiny iguanas are an interesting, if odd, animal to find on Gasparilla Island, but for residents, the iguanas have become somewhat of a nuisance as they enjoy eating resident's flower and vegetable gardens and even find their way into homes. As you transit the island, keep an eye out for the iguanas whose presence has sparked a heated debate among island residents over whether the non-native species should be controlled.


The second visit to this lighthouse was even better than the first for me. They seem to keep improving the surrounding grounds and the lighthouse is well maintained. The iguanas are ugly and big so stay close to the light!