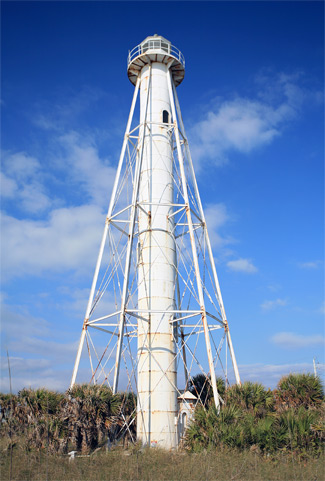 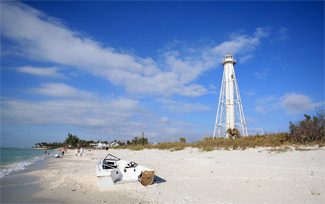 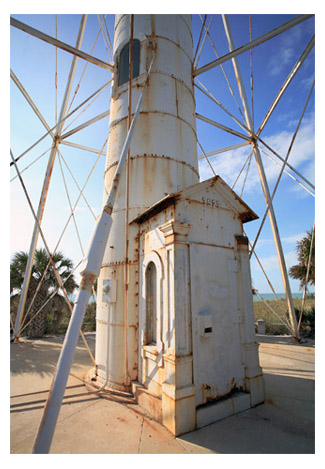 Pyramidal skeletal towers became popular in the late 1800s as they could be built at roughly half the cost of a stone or brick tower of the same height. Another advantage they had was that since they were constructed of prefabricated sections, it was possible to disassemble and move them. Such was the case for Boca Grande Entrance Rear Range Lighthouse. This hexagonal tower was built in 1881 by the Phoenix Iron Company of Trenton, New Jersey, and put into service at a station just north of Lewes, Delaware, where it served as the Delaware Breakwater Rear Range Light. The companion front range light was the Delaware Breakwater West End Lighthouse from November 1, 1881, when the rear range light was activated, until the end of 1902. Starting in 1903, the rear range light was paired with the Delaware Breakwater East End Lighthouse. The range lights served to guide vessels past the tip of Cape Henlopen and into Delaware Bay, however, the shifting shoreline on the cape resulted in the lights becoming ineffective, and the rear range light was discontinued in 1918. The tower stood inactive until it was dismantled and shipped by rail to Miami, Florida in 1921. A few years later, the tower was sent to Gasparilla Island, where in 1927 it was reassembled, painted white, and rechristened Boca Grande Entrance Rear Range Lighthouse. The transplanted tower remained dark until it was finally lit in 1932.

Boca Grande Entrance Rear Range Light worked in conjunction with a flashing light atop a twenty-foot-tall steel structure located offshore. When a captain positioned his vessel so that the light from the rear range was positioned directly above the flashing light of the front range, he knew he was in the middle of the shipping channel. The captain would continue north in the channel, until he reached a series of towers that marked the channel leading east to the safe anchorage at Port Boca Grande.

The Boca Grande tower isnt the only example of a tower being relocated to a different section of the country to continue its service. Just a few years after the tower was moved to Florida, a skeletal tower was transferred from the Delaware River in Pennsylvania to Michigan Island, one of the Apostle Islands in Lake Superior. Likewise, a tower used on Sapelo Island in Georgia until 1933 was dismantled and shipped to Fox Island in Lake Michigan.

The front range light of the Boca Grande Entrance Range was discontinued in 2003, and the rear light was renamed Gasparilla Island Lighthouse, the name the Port Boca Grande Lighthouse had before being deactivated in 1966. Plans to discontinue the light in 2004 were scrapped following public appeals, and the lighthouse remained in operation, guiding vessels safely through Boca Grande Channel into the safe confines of Charlotte Harbor, until it was deactivated in early 2017. The towers white light, which was alternately on for three seconds and off for three seconds, was displayed at a focal plane of 105 feet, with a red sector marking a dangerous approach.

In April 2016, the lighthouse and adjacent land were licensed to Barrier Island Park Society, which began a campaign to raise funds to restore the island landmark. By September 2016, the society had collected sufficient funds to begin restoring the tower, and over the next six months, replica nuts and bolts were put in place to secure the tower, replicas of the front access and lantern room doors were made, and the entire tower was repainted after the old paint and rust were removed.

Starting in April 2017, the tower opened for climbing a few days per month, except in August when the temperature inside the tower can be over 100 degrees.

On February 9, 2019, a relighting ceremony was held at Gasparilla Island Lighthouse where a replica of the fourth-order Fresnel lens used in the tower was unveiled. Following a lengthy approval process, the lighthouse has been designated a private aid to navigation and will once again send forth a flash every six seconds. The new light is produced by an amber, turtle-friendly Max Halo II bulb. This video shows Dan Spinella of Artworks Florida installing the replica Fresnel lens atop the lighthouse on January 11, 2019.

Located near the southern end of Gasparilla Island, which is near the entrance to Charlotte Harbor.
Latitude: 26.74203, Longitude: -82.26344

For a larger map of Gasparilla Island (Boca Grande Entrance Rear Range) Lighthouse, click the lighthouse in the above map.

Starting in 2017, the tower opened for climbing roughly one day per month.

The lighthouse is owned by the State of Florida. Tower open during tours.